Down Comes a Dam 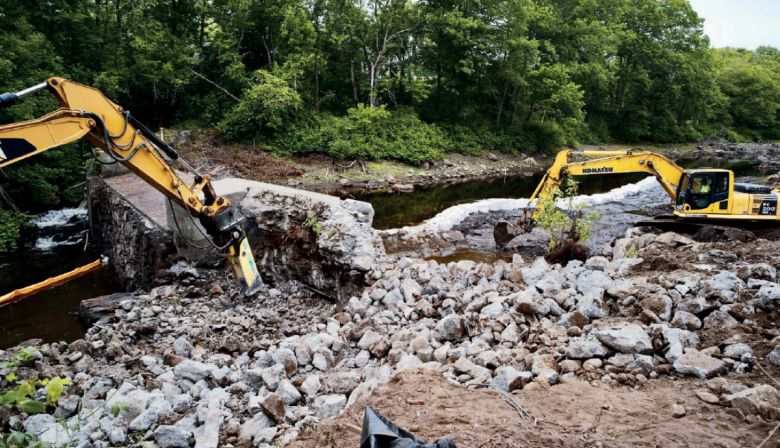 ASF scores major coup on Sheepscot.
On July 24, labouring in air so damp you could wring it like a sponge, workers began demolishing the Coopers Mills dam in the upper Sheepscot River, near Whitefield, Maine. Local residents lingered as the 214-year-old structure crumbled under a jackhammer’s assault. A front-loader hauled boulders and debris away from the embankment. Spearheaded by the ASF, the dam removal is part of a 3-year, $2.2 million initiative to improve fish passage in the Sheepscot. Sea-run species such as American shad, alewife, and Atlantic salmon were once abundant here, and by returning a more natural river flow, “we anticipate their numbers will rebound steadily,” said Andy Goode, ASF’s vice president for U.S. programs.

Goode first approached villages and towns on the Sheepscot in 2014 with a proposal to look at options to restore river connectivity. Backed by a local environmental group, the Midcoast Conservancy in Edgecomb, Maine, he ultimately won local support by coupling fish passage improvement projects with community benefits packages focused on local priorities. And for Coopers Mills residents, the top priorities were fire safety and better public access to the river. Firefighting tanker trucks have long been filling up on water drawn from an intake pipe in the impoundment upstream of the dam. But now that the dam is leaking like a sieve, water levels are often below the intake, and far below what’s needed to operate a fish pass that was built decades ago.

So, ASF brought in engineers to design two new intakes just upstream of what will soon be the former dam, along with a sweeping new landscape plan that will preserve the historic character of the site while encouraging increased public use. The entire project is expected to take four months.

Herb Hartman, an angler and member of the Coopers Mills Dam Committee, a local citizens group, described the ASF’s proposal as one the town couldn’t refuse. “The dam has served its purpose and repairing it would have incurred huge expenses,” he said.