From Scrum to Salmon River

Mar 4, 2021
Gareth Edwards, arguably the best rugby player ever, is also a fine fly-fisher and an ambassador for Atlantic salmon conservation.
FRANÇAIS

My trip through Wales’ salmon heritage connected me, via the Atlantic Salmon Trust, to one of the world’s great sports figures, rugby scrum-half Gareth Edwards (When Worlds Collide, ASJ, Spring 2021). Enormously gracious and wonderfully conversational, as it seems only the Welsh can be, Edwards did not need much prompting when I called to talk about his love of fishing.

“I fished all my life,” he began. From 5 or 6 years, in the small streams that ran off the hillsides in Gwaun Cae Gurwen, with a bamboo pole and home-fashioned hook.

Even at that early age he was aware of the impact pollution had on fishing. “It was a mining village,” he continued, “so the best 2 weeks of fishing was the miner’s summer holiday during the last week of July and first week in August, when the rivers only had a bit of a tint.” 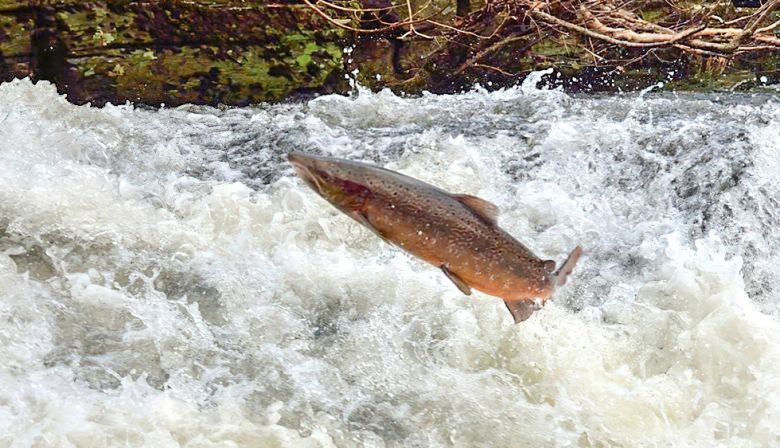 Atlantic salmon leaps falls in Wales’ Usk River. Photo courtesy of Wye and Usk Foundation
“Only a bit of a tint,” shines the light on the state of Welsh rivers back in the 1940s and 50s. The rest of the year, when the mines were in full operation, rivers ran black with coal dust and other industrial by-products.

In dozens of interviews, hundreds more likely, Edwards was asked about his rugby career. He credits an early school phys-ed instructor who spotted his potential. Outside of rugby, however, Edwards had a parallel passion. In this case it was his primary school headmaster, a very keen angler, who pointed him in the right direction.
Video below: Gareth Edwards is considered one of the finest Rugby players of all time. This video is of his iconic 1972 try against Scotland during the Guiness Six Nations.

“I played tennis with his daughter, and he brought me to cleaner streams in the surrounding mountains where under every tree branch there was a trout.” The headmaster also taught him to fly-fish and he’s never looked back.

During his childhood, playing pickup rugby in a weed-filled farmer’s field, the ages were mixed and the younger ones learned from older players. His angling experience was somewhat similar. When he was 12-years-old, a group in his village pulled together and bought a fishing beat on the Tawi. It was basically an angling club where the more experienced fishers gave fly tying classes to beginners.

“Older anglers would share their knowledge and their stories stoked my desire to fish. I loved it,” he says. The same anglers warned him not to fish for salmon.

“It was trout by and large,” Edwards says. “One elder statesman advised us ‘take my advice, don’t go salmon fishing, you’ll spend hours and you won’t get as much as fun. But they also warned, ‘once you get that pull you’ll never forget it.’” 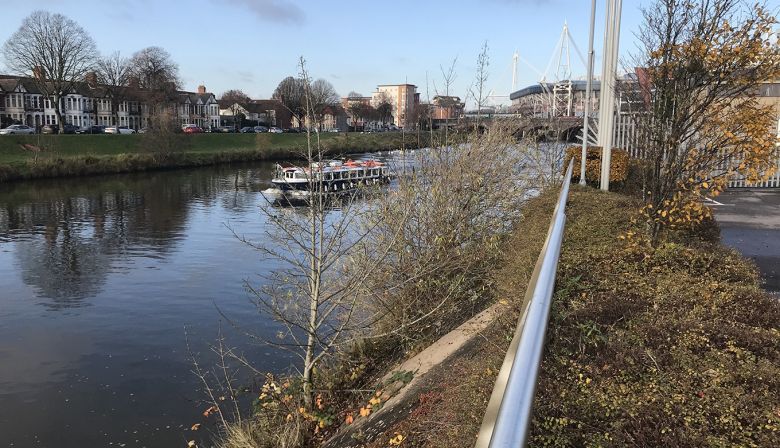 The Taff River flows by Principality Stadium in Cardiff from out of the mountains that surround Merthyr Tydfil, once the centre of the the industrial revolution. During the peak of coal and iron activity, its waters ran black but now support Atlantic salmon. Photo Martin Silverstone
By his 16th birthday, Edwards was already fishing for salmon and sea trout in the Tywi, a river he still visits today. After many hours of pursuit, he finally caught his first salmon at 17 or 18.

Throughout our conversation there was barely a whisper about the reason Edwards is world-famous. Of course, it was obvious that from his teens through to his early 30s, rugby was the mainstay of his life. In between those times, however, when he was home from Millfield public school in England or the free times between matches for club and country, even on rugby tours in places like New Zealand and Canada, it was a different tale—the story of a keen angler, a fly-fisher who enjoyed the sport for all it has to offer. 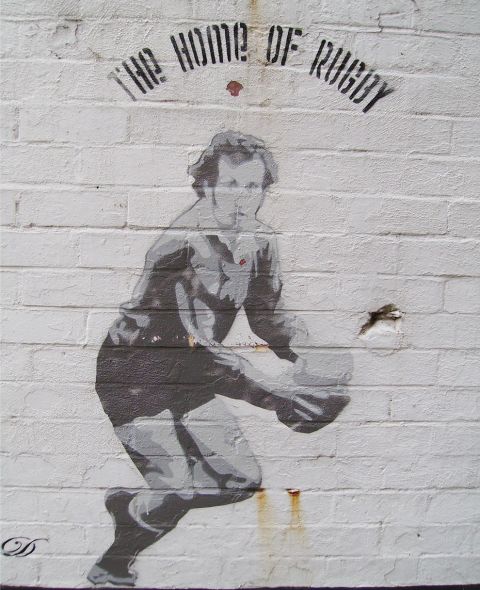 From weathered wall paintings to bars that carry his name in the national stadium, Gareth Edwards is to rugby what Wayne Gretzky or Jean Beliveau is to hockey. But very few fans know of his love of fly-fishing and his work on behalf of Atlantic salmon. Painting of Gareth Edwards at the rear of the East Stand, Cardiff Arms Park, Wales. Photo Seth Whales
And following rugby, throughout his professional life as an engineer and teacher, he has given back to that “in between” pastime (as he has also done to the sport of rugby). He has worked with Welsh water conservation boards, as Chairman of the Carmarthenshire Fisherman’s Association, and now an ambassador for the Atlantic Salmon Trust. In these roles he has helped promote the sport of fly-fishing and the conservation and restoration of rivers in Wales and across the United Kingdom and, now, even beyond.

“It’s for the future,” he says, “we need to teach the young. Not just the wonderful feeling of catching a fish, but also conservation. Very much so, catching a fish is important, but it’s more about the challenge, and to be in the beautiful country side, surrounded by songbirds and enjoying nature.”

While researching Welsh rivers I had come across a quote that he would rather catch a salmon than score a try for Wales. Confirming it was my main reason for contacting him. The answer revealed a fascinating bit about Edwards’ rugby and angling passions. 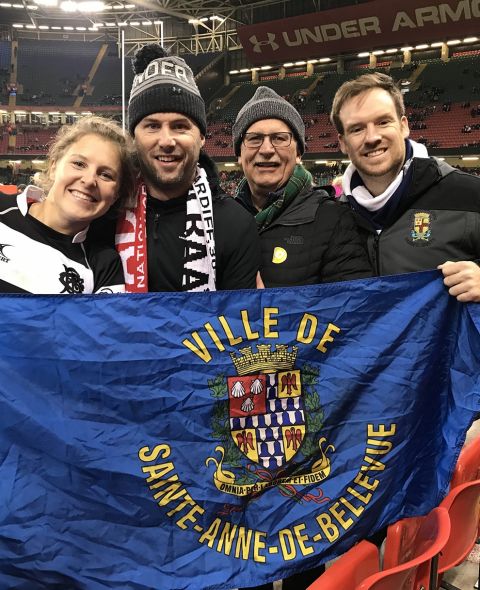 In Principality Stadium in Cardiff, Wales - from left: Brianna Miller with brother Andrew, father Michael and Fiance Bryce Thomassin. Photo Martin SIlverstone
“It was Cliff Morgan who thought it would be a good idea to interview me while I was fishing,” Edwards recalls, laughing. “I was wearing chest waders and in the river, I was 20 years old and the Captain of Wales. I’d scored plenty of tries, but I hadn’t caught very many salmon.”

Behind the innocence and humour of the episode, there was a more sober side to the remark. It had the same reaction if Auston Matthews said mid-season he’d prefer to go fishing than play for the Leafs. The head of the English rugby union took the opportunity in the publicity build up for a Welsh/England match, to call the quote inappropriate for a player of Edwards’ stature. But Edwards also remembered the reaction of his teammates back in the Wales dressing room. “I took some good-natured ribbing, but they enjoyed the fact that it had been about something other than rugby, which had become so much about the pressure to win. It was a bit of a release.” 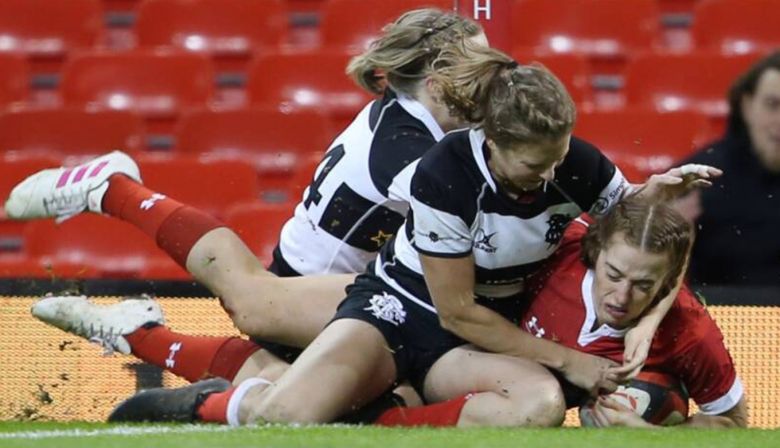 Canada’s Brianna Miller brings down a Welsh player in Prinicipality Stadium in December 2019.
Perhaps that’s a final lesson to us all in these stressful Covid days, weeks and months. The great outdoors, clean rivers and the chance to connect with a wild streak of silver lightning can help take our minds off whatever pressures confront us in “real” life.

Once I had confirmation of the wonderful quote, I couldn’t leave it at that. I had to ask Edwards whether it included “that try” (see video below). Edwards began laughing, then he hung up.
Martin Silverstone is the long-time editor of The Atlantic Salmon Journal and an active volunteer in the rugby community around Montreal. He can be reached at msilverstone@asf.ca.