All salmon raised in open net-pens is environmentally unsustainable 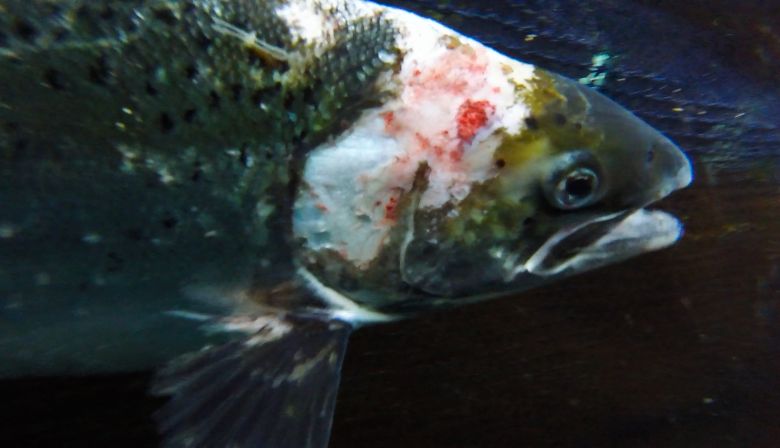 Salmon health suffers in open net-pens. Sick fish, like the one pictured here, still find their way to grocery store shelves. Image: Don Staniford
New advice for seafood shoppers is being criticized by wild salmon advocates in Eastern Canada. Seafood Watch, a buyer’s guide published by the Monterey Bay Aquarium, recently upgraded open net-pen salmon from Nova Scotia and Maine to yellow, or “Good Alternative.” Meanwhile, the guide gives a red “Do Not Buy” rating to salmon raised in sea cages in British Columbia, New Brunswick, as well as Newfoundland and Labrador.

“We’re happy most open net-pen salmon is on the red list,” said Bill Taylor, President of the Atlantic Salmon Federation. But as many Canadians prepare for celebratory holiday meals, he warned shoppers that it’s important to sift the good advice from the bad. Seafood Watch’s yellow label for sea cage salmon from Maine and Nova Scotia is misleading, he said.

“A yellow label for open net-pen aquaculture salmon from Maine and Nova Scotia is simply unacceptable. Escaped fish from these operations put critically endangered wild populations at risk,” he said. “Everywhere this industry operates there are negative ecosystem effects. Maine and Nova Scotia are no different.” 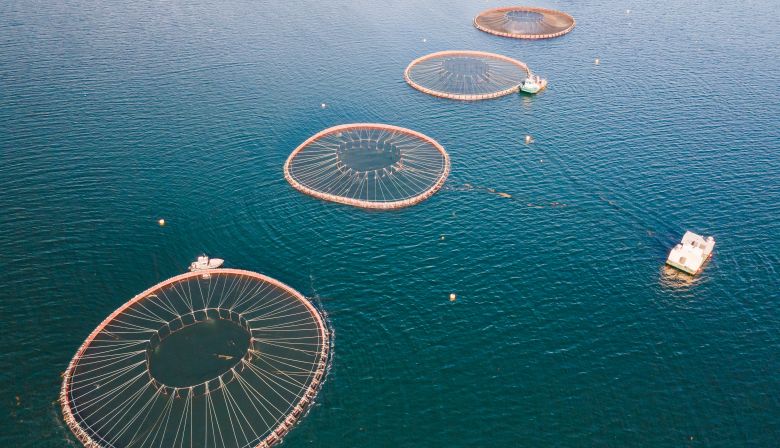 They may look innocuous from above, but aquaculture sea cages wreak havoc on the marine ecosystem. Image: Tom Cheney/ASF
In 2021 several escaped salmon from open net-pens were found in rivers in Maine and Nova Scotia. Robust scientific evidence shows that escaped fish, essentially domesticated animals, can and do interbreed with wild populations. The hybrid offspring are less fit for life in the wild and thereby threaten wild stocks through genetic dilution.

The escaped fish were found in Nova Scotia’s Gaspereau River, where salmon are protected under Canada’s Species at Risk Act. Escapees were also found in the Union River in Maine. Wild salmon there are listed in the United States’ Endangered Species Act.

A recent hearing in Nova Scotia revealed that the open net-pen salmon aquaculture industry in that province operates with little to no oversight and monitoring. Simon Ryder-Burbidge, a representative of Halifax’s Ecology Action Centre, emphasized that the lack of data does not indicate a lack of harm. In a press release issued by SeaChoice, Ryder-Burbidge noted, “We [Nova Scotia] are the only province in Canada that doesn’t publicly report sea lice counts, and river monitoring data for escaped farmed fish is almost non- existent…. The scoring system seems to incentivize a data-poor environment.

In the same release Dr. Jeffrey Hutchings, a biologist at Dalhousie University, said, “Nova Scotia has by far and away the most endangered wild Atlantic salmon populations in Canada. For many of these rivers, even a few escaped farmed fish, especially when they breed with wild salmon, can have a detrimental effect on the natural populations.” 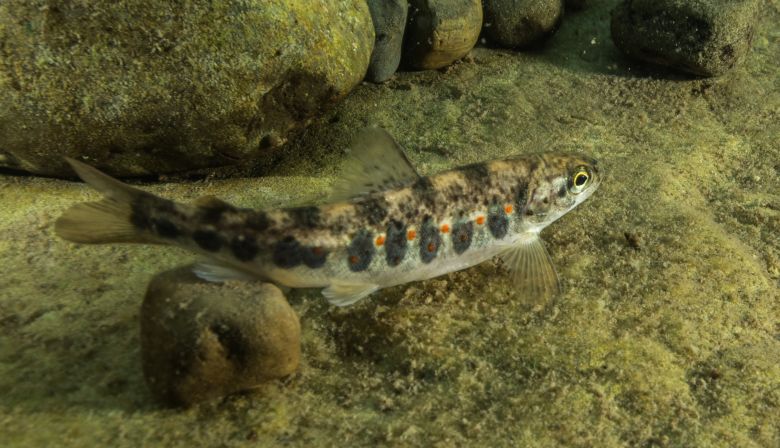 When aquaculture escapees interbreed with wild fish, the offspring are less adapted to life in the natural environment. Here, a healthy wild Atlantic salmon parr swims in a Gaspé river. Image: Nick Hawkins
Beyond its harm to wild salmon populations, open net-pen aquaculture has increasingly been under fire for animal health issues. Images showing diseased, sea lice-ridden fish are widespread on news and social media sites. The industry is also a heavy user of pesticides and other chemicals, and its operations release damaging effluent into the marine environment. For all these reasons, many buyers’ guides, including Canada’s OceanWise, recommend against purchasing all open net-pen aquaculture salmon.

That’s advice to be heeded, said Taylor. Buyers can make a difference with their choices. When it comes to salmon, it’s as simple as this: “All salmon raised in open net-pens threaten wild salmon and coastal ecosystems.”