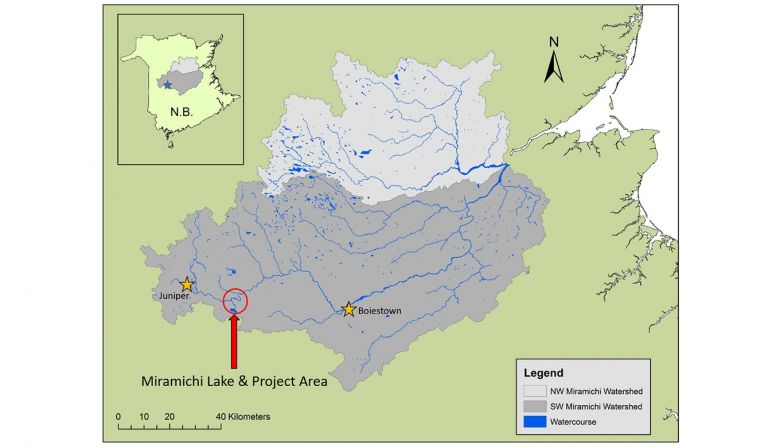 The 13,500 square kilometre Miramichi watershed will be colonized by invasive smallmouth bass if they are allowed to spread outside the current area targeted for eradication, circled in red. Nathan Wilbur/ASF
The proposal to eradicate invasive smallmouth bass from the Miramichi watershed is at a cross-roads and decisions in the coming weeks will determine if the project proceeds in 2021, or at all.

Smallmouth are one of Canada's most prolific invasive fish. They use a wide variety of river and lake habitat and quickly assume a dominant role among native species. They were first discovered in Miramichi Lake in 2008 and are now in the Southwest Miramichi River.

To stop the spread, a collection of Indigenous organizations and NGOs led by the North Shore Micmac District Council is proposing to use a federally approved rotenone product to kill smallmouth in Miramichi Lake, Lake Brook, and approximately 15-kilometres of the Southwest Miramichi. ASF is one of seven partners in this Working Group.

Fisheries managers around the world use rotenone to control and eradicate invasive fish because it is safe, effective, and well-understood. In Norway, for example, rotenone has been used to eradicate the parasite Gyrodactylus salaris from entire rivers. Recent Canadian examples, both from 2020, include Banff National Park and Piper Lake in Nova Scotia, where provincial staff went from discovery of smallmouth to eradication in a little over 12-months. 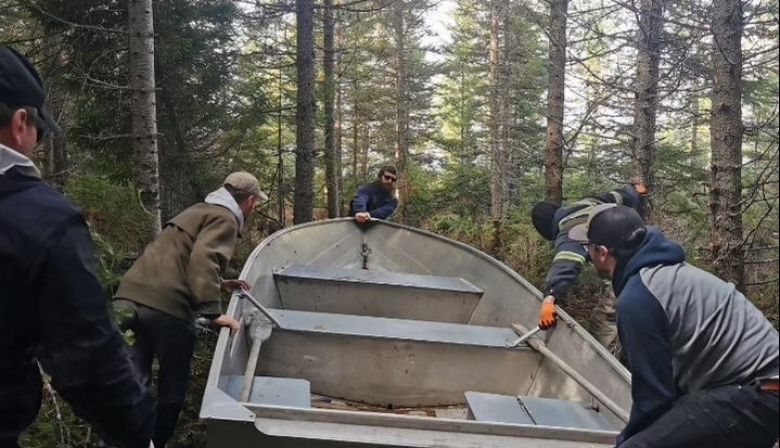 A tough slog for a crew from Anqotum Resource Management pulling an aluminum boat into McKiel Lake to search for smallmouth bass in the fall of 2020. More than 12-years since the discovery of smallmouth in Miramichi Lake, federal and provincial regulators are still undecided on eradication. Nathan Wilbur/ASF
Dealing with aquatic invasive species in Canada is the responsibility of the federal government. Although some provinces have accepted authority to permit the use of rotenone, like Nova Scotia and British Columbia, New Brunswick has not.

In 2017 our Working Group commissioned an expert report on smallmouth eradication in Miramichi Lake. The goal was to stimulate government action by demonstrating that eradication was safe and effective, but a 2018 letter from then Fisheries and Oceans Canada (DFO) Minister Dominic LeBlanc made it clear that the federal government would, "remain solely as a regulator for such a project."

So the North Shore Micmac District Council stepped up to become the proponent in partnership with all other members of the Working Group. An application was submitted to DFO in April 2019 to treat Miramichi Lake and Lake Brook. It was amended a year later following the discovery of smallmouth in the Southwest Miramichi River.

For the project to proceed we need authorization through DFO's Aquatic Invasive Species Regulations and permission from the New Brunswick government which is conducting an environmental impact assessment (EIA).

Seeking to satisfy DFO, we have spent the last 20 months answering multiple rounds of questions, participating in the federally-led Indigenous consultation process, and conducting extensive public and stakeholder engagement, all of which is detailed beginning on page 59 of our EIA registration document.

Through the New Brunswick EIA process we received and answered 77 questions from representatives of various provincial and federal departments and 35 questions from a group of people with cottages on Miramichi Lake. Our project also generated over 1,300 letters of support from the public.

The review has been thorough and beyond what is required in other jurisdictions. Once the process is complete, hopefully in the coming weeks, we can begin acquiring the material and equipment needed to carry out a safe and successful eradication in 2021.

Below we describe the major features of the Miramichi project, and detail our plan to stop a biological invasion of one of Canada's great wild rivers.

Scoping out the problem 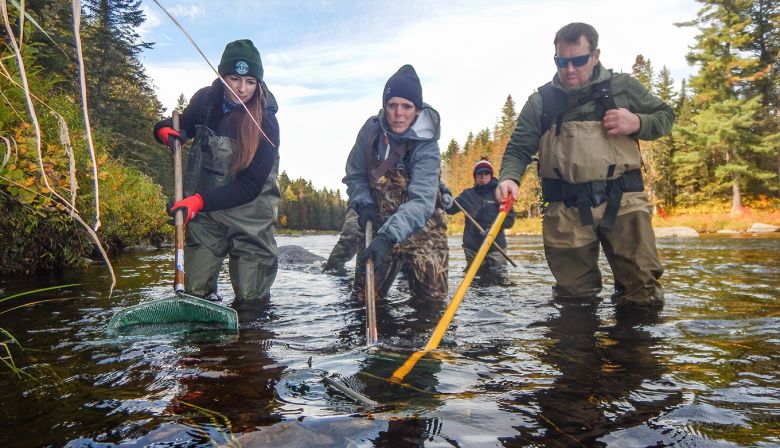 A crew from New Brunswick's Department of Natural Resources and Energy Development electrofishes the Southwest Miramichi in fall 2019 searching for smallmouth bass. Martin Silverstone/ASF
A successful eradication depends on knowing where smallmouth are in the watershed. Although evidence was starting to emerge that smallmouth had reached the Southwest Miramichi River via Lake Brook which flows out of Miramichi Lake, visual confirmation didn't come until August 2019. UNB professor Allen Curry was snorkelling for smallmouth and managed to photographed one in Tent Pool, approximately 7 kilometres downstream from the mouth of Lake Brook.

Curry’s picture and the subsequent catch of three smallmouth at nearby McKiel Pond Pool set off an expanded search of the Southwest Miramichi. Working group members along with provincial and federal government staff started angling and electrofishing and water samples were collected from 29 sites, starting just upstream of Lake Brook and extending downstream approximately 125-kilometres to the village of Boisetown.

The samples were processed by specialists at Fisheries and Oceans Canada using a laboratory technique known as environmental DNA analysis, or eDNA for short. Incredibly sensitive instruments can detect molecules shed by fish and identify the species they came from.

The results, combined with physical surveys, provided a first look at smallmouth distribution in the Southwest Miramichi River: there were no catches or detections upstream of Lake Brook, but a number of captures at McKiel Pond Pool and eDNA hits downstream to where Curry's picture was taken. 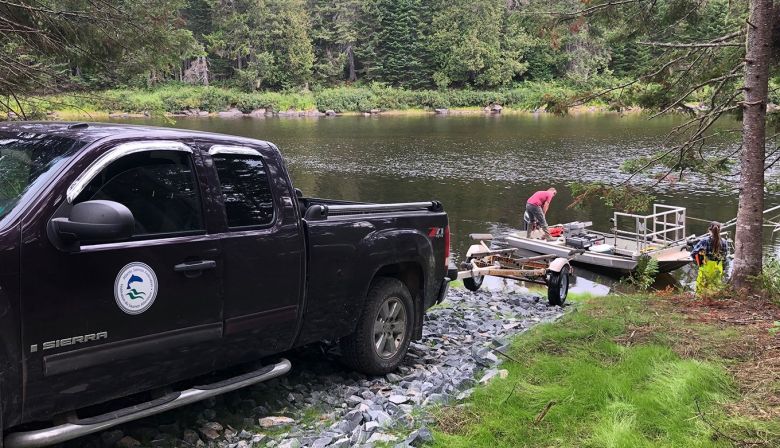 Unloading an electrofishing boat at McKiel Pond Pool in August 2020, a remote, slow moving section of the Southwest Miramichi River where smallmouth are concentrated. An access trail and boat launch were built by crews from J.D. Irving, Limited which owns most land in the area. Nathan Wilbur/ASF
In 2020, water samples for eDNA analysis were collected from the 2019 sites plus new locations further upstream and down. There were no detections outside the proposed treatment area and no reports in either year of smallmouth bass caught by anglers in other parts of the river.

Then, on September 11th, a single smallmouth bass was captured in the estuary of the Southwest Miramichi River inside a DFO trap net used to count returning salmon - the first and only documented capture of a smallmouth bass outside the proposed treatment area and 150-kilometres away from the closest positive eDNA result.

The Millerton smallmouth triggered an eDNA sampling blitz in the area, and another report of a smallmouth sighted near Boisetown led to a concerted electrofishing effort, but no more bass were detected or found.

Not including the Millerton fish, and despite considerable angling and electrofishing effort elsewhere, all 108 smallmouth bass caught in the Southwest Miramichi River have come from McKiel Pond Pool, a slow moving, deep stretch downstream of Lake Brook, . Similarly, there have been no positive eDNA results outside the project area.

The weight of evidence indicates smallmouth are still within the planned treatment area and no other populations have been found in the watershed. Nonetheless, more eDNA analysis and physical surveys will take place before our rotenone treatment in August 2021 to ensure the upstream and downstream extent are sufficient.

Planning for Safety and Success

The proposed treatment area with major works described. Nathan Wilbur/ASF
When properly used, rotenone products are not harmful to mammals, birds, and reptiles. For humans, a 2020 review by United States Environmental Protection Agency found "insufficient evidence to suggest a clear associative or causal relationship exists between rotenone exposure and any health effects observed in human populations." Based on this evidence, plus rigorous testing from federal scientists, Health Canada has approved the rotenone product Noxfish Fish Toxicant II for use in waterways.

However, rotenone is not selective when it comes to gill breathing animals like fish, immature amphibians, aquatic insects, and plankton. Different species have different tolerance levels, but some negative effects on creatures other than smallmouth can't be avoided. Our project is designed to minimize this unwanted harm. For a full description of mitigations check out our Environmental Impact Assessment registration document, pages 50-59. Here are some examples: 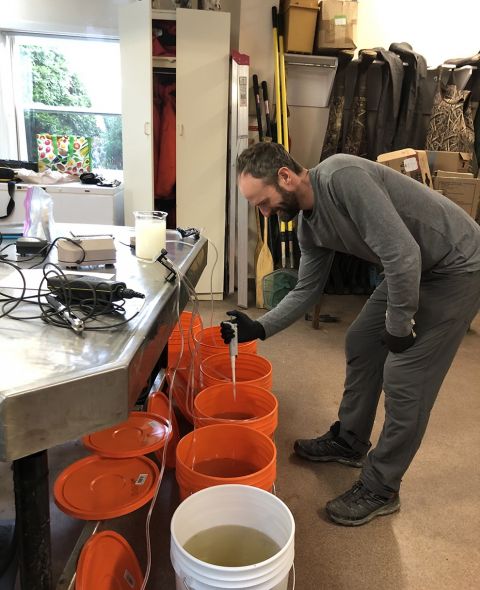 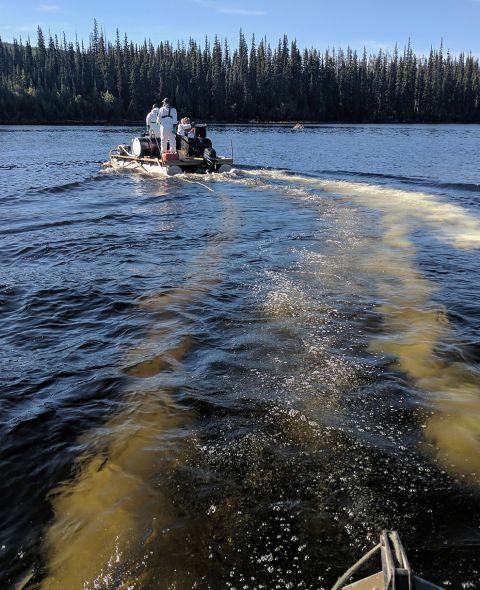 A pontoon boat discharges diluted rotenone under the surface of Windy Lake, near Kelowna, British Columbia in September 2017, the last of 12 waterbodies treated by B.C. officials in a successful campaign to eradicate invasive smallmouth bass and perch from the Thompson River watershed. Neville Crabbe/ASF
The proposed rotenone treatment of Miramichi Lake, Lake Brook, and the Southwest Miramichi will take place in August and September of 2021. Below is a summary of the procedure with full details found in our EIA registration document starting on page 16.

We have planned one simultaneous treatment of Miramichi Lake, Lake Brook, and the Southwest Miramichi, and a second treatment of Lake Brook and the river stretch approximately four weeks later. This is a common practice in flowing water where habitat is complex and the likelihood of missing individual fish is higher. Spacing the successive treatments four weeks apart, rather than one year, will minimize harm to non-target species because native fish will not yet have recolonized the area.

In the lake, most rotenone will be deposited under the surface by specially equipped boats. The water’s edge and areas with dense aquatic vegetation will be treated with a combination of boat and backpack spraying. Miramichi Lake has four small streams flowing in and just prior to treatment each one will be surveyed by a backpack electrofishing crew. If no smallmouth are found, a rotenone drip station will be established 100 metres upstream. If smallmouth are found in a tributary, electrofishing will continue until no bass are found for 300 metres and at that point a drip station will be set up. 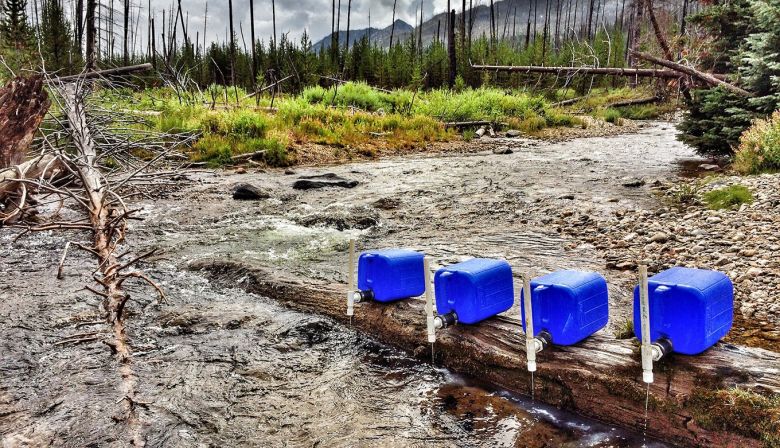 A drip station in Montana’s Yellowstone National Park where state and federal officials used rotenone in 2014 to reclaim Grayling Creek for native trout and Arctic grayling that were being crowded out by non-native rainbow and brown trout. U.S. Fish and Wildlife Service
For Lake Brook, we will use a combination of backpack spraying and drip stations or aerial application by helicopter. The brook's inaccessible location, dense vegetation and myriad offshoots and channels make it a particularly challenging area. A final determination of the methods used for Lake Brook will depend on environmental conditions just prior to treatment and resource availability at the time.

In the river, treatment will include the use of drip stations, backpack, and boat-based spraying. All the methods proposed for the lake, brook, and river are outlined in the American Fisheries Society’s standard operating procedures for rotenone projects, a guide we are following in close consultation with its primary author and rotenone expert Brian Finlayson. 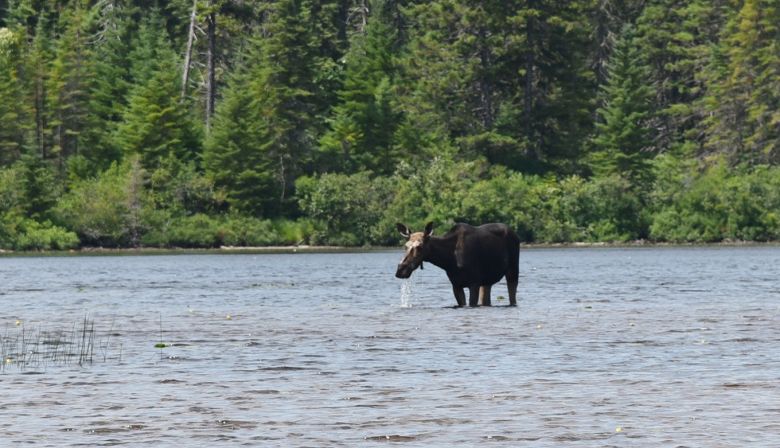 A cow moose grazing in Miramichi Lake, July 2020. Neville Crabbe/ASF
Decades of experience and a body of peer-reviewed literature indicate that fish, insects, and other organisms will begin to recover from a rotenone treatment soon after it concludes. Our plan contains a five year monitoring and recovery program that will be led by Anqotum Resource Management.

It has four main activities: monitoring rotenone levels during and after treatment, ensuring deactivation is successful, conducting surveys to confirm whether smallmouth have been eradicated, and monitoring ecosystem recovery. A full description can be found in Appendix C - Monitoring Plan and Appendix D - Fish Re-establishment Strategy of our EIA registration document. 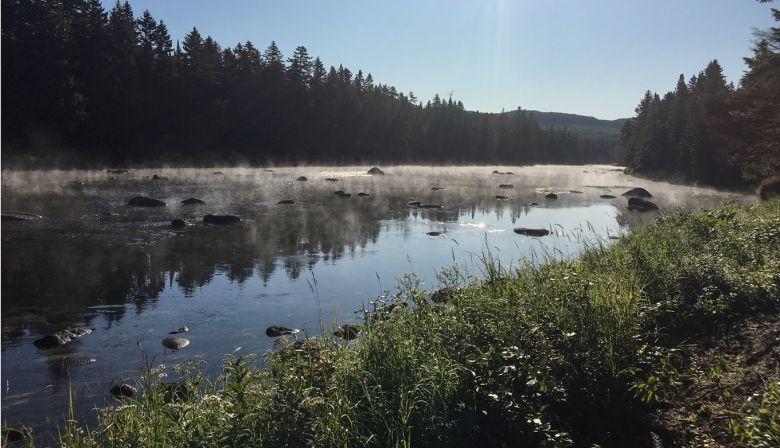 Dawn near McKiel Brook. Neville Crabbe/ASF
A recent review of rotenone eradications dating from the late 1930s to the present found that when eradication of an invasive species was the goal, projects were successful 75 per cent of the time. In the United States, the success rate was 87 per cent.

Early users of rotenone in fisheries management made mistakes, each time providing lessons for future projects. Following the methods developed by the American Fisheries Society, incorporating knowledge from more than seven decades of use, and involving noted experts, we are confident that our project can be carried out safely with a high likelihood of success.

On the other hand, doing nothing or continuing to spend time and money on containment and removal efforts will guarantee the invasion of an ecosystem and the degradation of Indigenous, recreational, and commercial fisheries. It would be a hard gut-punch to the economy of the Miramichi Valley where 637 people annually are employed in Atlantic salmon related jobs.

Neville Crabbe is Executive Director of Communications with the Atlantic Salmon Federation. He can be reached at ncrabbe@asf.ca