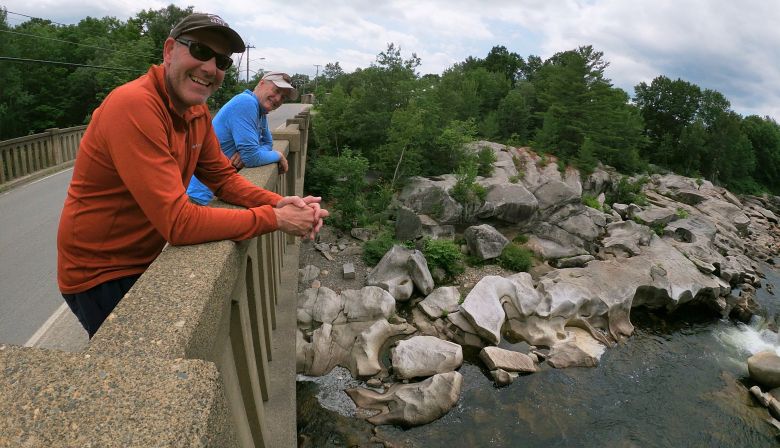 John Burrows, foreground, and Andy Goode, ASF's team in charge of U.S. programs survey the Sandy River. Photo ASF
In the woods of Western Maine, just a few miles from the resort town of Rangeley, lie the headwaters of the Sandy River; four small ponds beside the highway, completely unremarkable compared to the big lakes nearby that draw sports and tourists from around the world. At a glance, there’s no indication that these ponds give birth to some of the coldest, most inviting Atlantic salmon habitat in the United States.

From its headwaters, the Sandy River runs fast for 70-miles (115-kilometres) to its junction with the Kennebec River near the town of Madison. It’s a mountain river with tremendous gradient, falling an average 22 feet per mile. Huge boulders dot the gravel rich riverbed, and even in the heat of summer the water is cold and gin clear. The Sandy is a prime place for Atlantic salmon, but for more than 200 years access to the sea was completely blocked by dams.

Starting in the late 1700s and stretching through to the 20th century a flurry of dam building on the Kennebec and its tributaries cut off access to historic spawning grounds for Maine’s sea-run fish. Species like alewife, American shad, striped bass, shortnose sturgeon, and Atlantic salmon almost disappeared completely from the watershed. 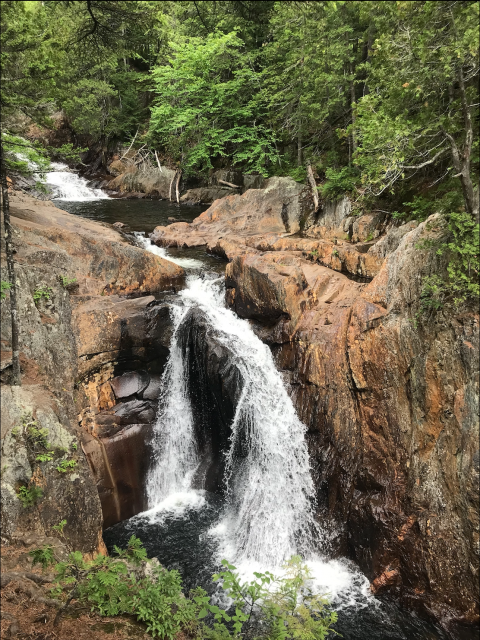 Small Falls, near the headwaters of the Sandy River are the end of the line for fish migrating upstream. Photo John Burrows/ASF

It took the removal of the Edwards Dam on the mainstem of the Kennebec in 1999, and a plan to build a fishway upstream at the Lockwood Dam before salmon restoration on the Sandy River was attempted.

With no returning adults to rely on for natural reproduction, in the winter of 2002-03, state salmon biologist Paul Christman and his team modified some old refrigerators and placed them on the banks of the Sandy River. They were rigged so river water could flow through and 43,000 salmon eggs were divvied up and dropped inside.

Hatching success averaged 90% that year, but there were issues with ice build-up in the old refrigerators.

The state crew came back in the fall of 2004 with a new plan to place hatchery eggs inside incubation boxes nested in the river gravel. It was an improvement over the stream-side scheme, but still not perfect.

Eventually Christman went au natural, using water pumps and hoses to scour out artificial redds in the Sandy River, then manually depositing eggs in the gravel. So-called egg planting minimizes hatchery influence and exposes fish to the wild from the earliest life stage.

The eggs hatch when the water temperature is right. Tiny alevin with their yoke sack attached emerge from the gravel queued by Mother Nature. As fry, the young salmon disperse when conditions are optimal, all without help from human hands. 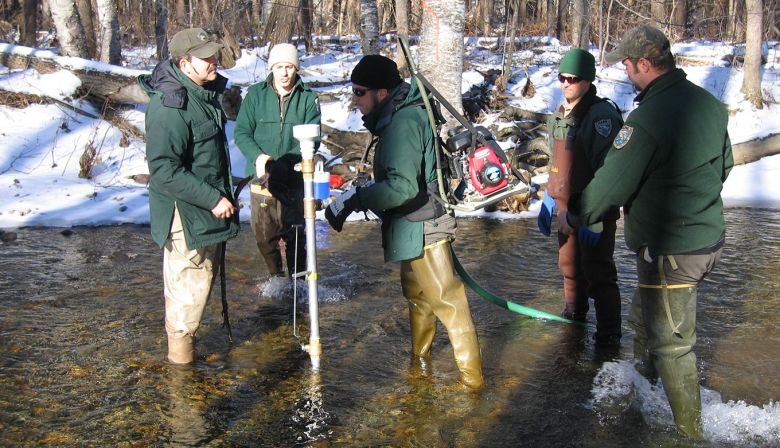 Biologists and technicians from Maine's salmon recovery team use a backpack mounted pump to scour out a nest for eggs and then drop them directly in the gravel, a technique called eg planting. Photo John Burrows/ASF

Still held up by dams

Today, salmon fry and parr can be found throughout a huge portion of the Sandy River watershed. Anywhere from a few hundred thousand to a million eggs are planted every year. That may sound like a lot, but it’s a small number considering a single 10 pound (4.5 kilogram) female can lay 8,000 eggs herself, and the Sandy has enough habitat to support thousands of returning adults.

Egg planting alone can’t account for the densities of juvenile salmon found in the river today. Tests have shown that a growing number of the fry and parr are the result of natural reproduction from the 30 to 60 adults that make it back from their ocean migration each year. 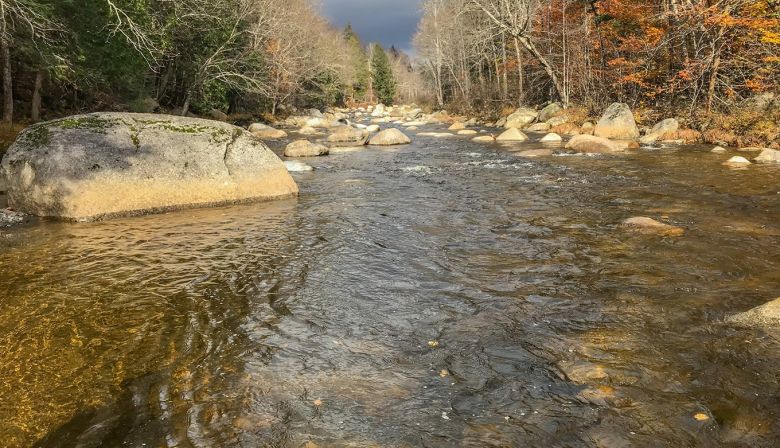 The Sandy River watershed offers hundreds of miles of attractive and productive habitat to native trout and salmon. Photo John Burrows/ASF
These fish are true survivors, some of the most wild Atlantic salmon in the U.S. today.

Leaving the Sandy River, they navigate thousands of nautical miles of open ocean between the Gulf of Maine and the Labrador Sea. They dodge sharks and seals while constantly searching for food to feed their growing bodies.

But on the homestretch, back in freshwater, there are still thousands of tons of concrete in between them and the spawning grounds they instinctively seek out. Three of the four remaining mainstem dams on the Kennebec provide no fish passage.

Sandy River salmon are pulled out at the Lockwood Dam, placed in a tank and trucked upriver. ASF is pushing for removal of these dams to restore the Kennebec, but in the meantime, we’re focusing our efforts on one of the Sandy’s main tributaries, the long-blocked off Temple Stream. 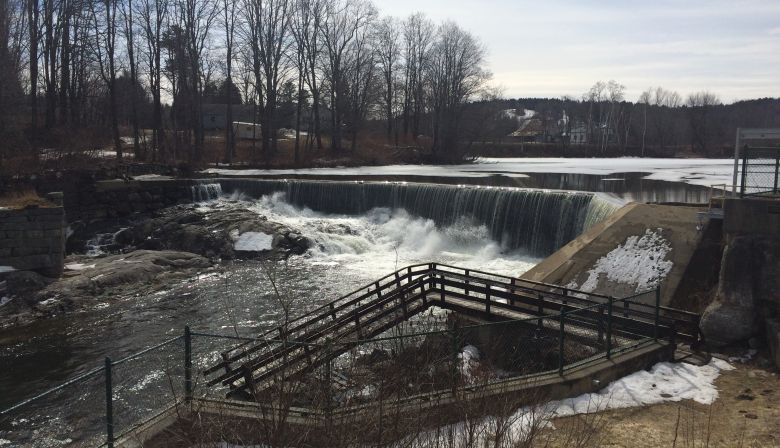 ASF has been the catalyst for dozens of dam removals and fish passage improvement projects throughout the State of Maine. We work with partners like The Nature Conservancy, NOAA Fisheries, US Fish and Wildlfie Service, the Penobscot Indian Nation and many others to attract public grants and private donations.

Along with funding and engineering expertise, working with the community is an important ingredient for project success.

Near the town of Farmington, the Temple Stream flows into the Sandy River. It’s only 7-miles (11-kilometres) long, but its entire length consists of high-quality salmon habitat, currently full of fry and parr from egg-planting over the past decade. Temple Stream could be welcoming home adults trucked around the Kennebec dams, but access is completely blocked.

The Walton’s Mill Dam, a dilapidated circa 1820 structure, has never had a ladder or other fish passage. Today the structure is owned by the town of Farmington.

Faced with the prospect of an order from the federal government to construct fish passage for endangered Atlantic salmon at the cost of $750,000 U.S., several years ago ASF approached community leaders with a solution - let us pay to completely remove the structure instead.

In addition to demolition, we proposed to build a community park and erect signage telling visitors about the history of the site, all at no cost to local taxpayers.

In 2018 a yes-no question was put to voters in Farmington and residents supported the ASF-led dam removal project by a margin of two to one. Thanks to a $1,065,000 grant from NOAA Fisheries, ASF is now raising the rest of the money needed for the $3 million USD Temple Stream restoration which is set to get underway this summer.

We’re hoping to replace two problematic culverts this year, reconnecting 6 miles of cold-water tributaries to the Temple’s mainstem. We are currently finalizing engineering plans, design work, and securing all the necessary permits to remove the Walton's Mill Dam in 2021. 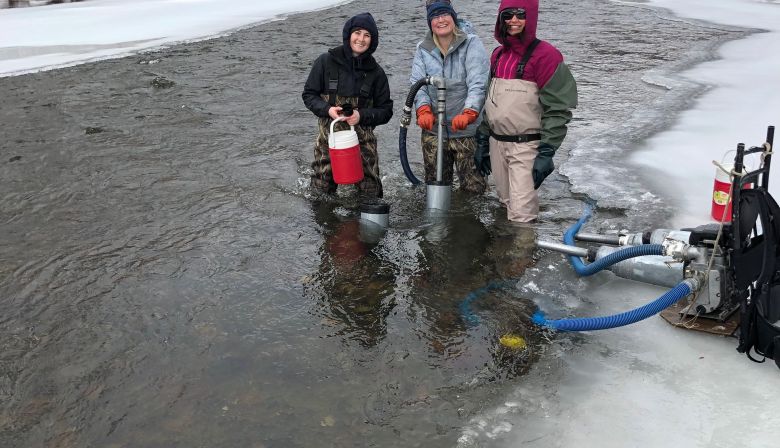 ASF's Maranda Nemeth, right, along with biologists Cassidy Bigos and Liberty Chestnut plant salmon eggs just above of the Walton's Mill Dam on the Temple Stream earlier this year. Photo ASF
Once complete, our work in Temple Stream will connect a total 52.3 miles of moving water, from the headwaters of the Temple to its confluence with the Sandy River and downstream to the Weston Dam on the Kennebec in Skowhegan. It will allow salmon to access more than 2,200 units of spawning and rearing habitat.

Exciting things are happening for salmon in Maine. I look forward to sharing our progress with you in the coming year.
John Burrows is ASF’s Executive Director for U.S. Operations. He has been advocating for restoration of the Kennebec River watershed for 20 years and enjoys summer swims in the Sandy River with a salmon or two.