At a rare public hearing on aquaculture in Atlantic Canada, ASF calls for enhanced monitoring to answer long lingering questions

If you want to understand aquaculture impacts, start looking 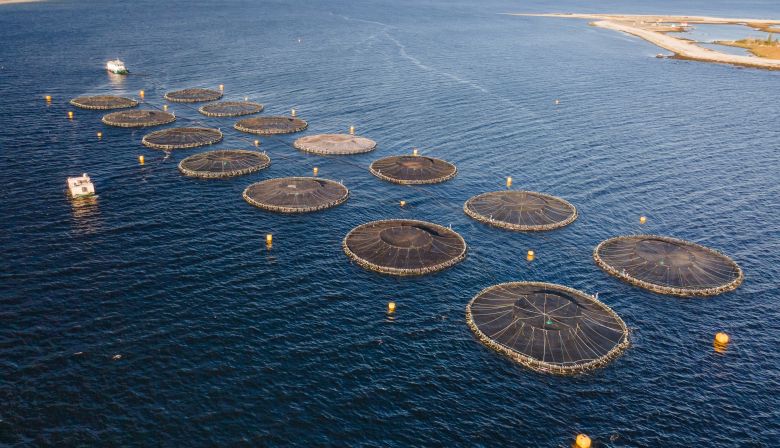 Open net-pen cages near Liverpool, N.S. Tom Cheney/ASF
Nova Scotia’s Aquaculture Review Board held its first hearing on salmon last week in Yarmouth, only the second time the panel has convened since its establishment in 2015. It was a rare opportunity to peer inside the normally closed Atlantic Canadian salmon aquaculture industry and shine light on the negative effects that sea cages have on wild salmon.

The issue at hand was an aquaculture lease at Rattling Beach, near Digby, N.S. For 17 years, Cooke Aquaculture has been operating outside the lease boundaries. The actual lease would accommodate about 3 cages and 120,000 farmed salmon, yet Cooke has anchored 20 cages and filled them with over 600,000 fish.

The company doesn’t dispute this fact. Instead, they have been asking for the Nova Scotia government to change the boundaries and accommodate their expansion. That request fell to the province’s Aquaculture Review Board.

At the hearing in Yarmouth, lawyers were present on behalf of Cooke Aquaculture and the Nova Scotia government, as well as Gregory Heming, an ‘intervenor’ and environmental advocate who lives near the site in question.

To help inform its decision, the 3-member panel assessed the potential impacts of the aquaculture operation on wild Atlantic salmon. Ecojustice, a Canadian environmental charity, represented Heming and called ASF’s Jonathan Carr to testify. He was summoned as an expert witness, someone who has studied aquaculture/wild interactions since his graduate thesis in the early 1990s. As Carr testified and the data supports, escapes happen, and the two largest threats to conservation and recovery of wild salmon stocks are from interbreeding events in freshwater, and sea lice infestations from fish in sea cages. 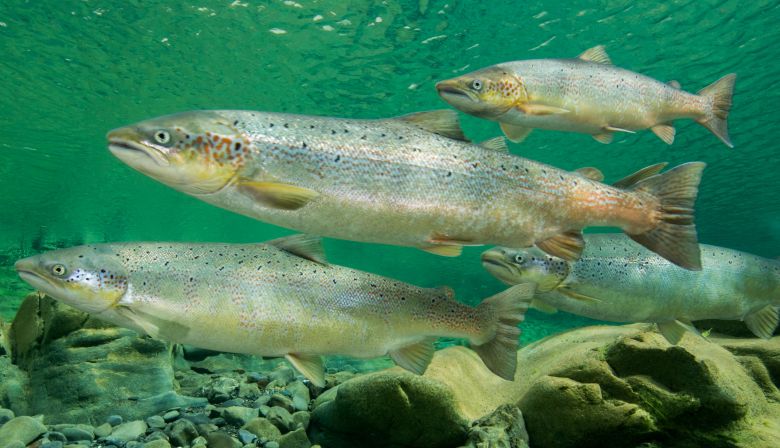 Wild Atlantic salmon in the clear waters of Gaspésie. Nick Hawkins
For several hours, Carr answered questions from Ecojustice’s Caitlin Urquhart, then Cooke’s lawyer, Robert Grant. As the hearing wrapped up, Joel Richardson, Vice-President of Public Relations for Cooke, took a rosy view of Carr’s submission: “Overall, the Rattling Beach farm presents a very low risk–and that was confirmed in testimony by the Atlantic Salmon Federation–to the environment and to any potential interactions with wild salmon,” he told the Saltwire Network.

What Carr did say is that we just don’t know what impact escaped aquaculture fish are having on wild salmon in the area around Rattling Beach, the site on which the hearing was focused. That’s because there has been almost no study of that specific site and how its fish and effluent interact with the environment.

Nathaniel Fiendel, the Manager of Aquaculture Development for Nova Scotia’s Department of Fisheries and Aquaculture, testified that in electrofishing surveys in the area, no escapes were discovered. But as Carr explained, the electrofishing effort was for juvenile salmon. No biological sampling was done, so it was not possible to detect whether the young fish have wild or aquaculture origin parents.

We know that fish frequently escape from sea cages. On the other side of the Bay of Fundy, a monitoring program on New Brunswick’s Magaguadavic River has detected escapees every single year since it began in 1992. Most of those escaped salmon have come from unreported events. Escapees have outnumbered wild salmon in that river in 26 out of the last 30 years. 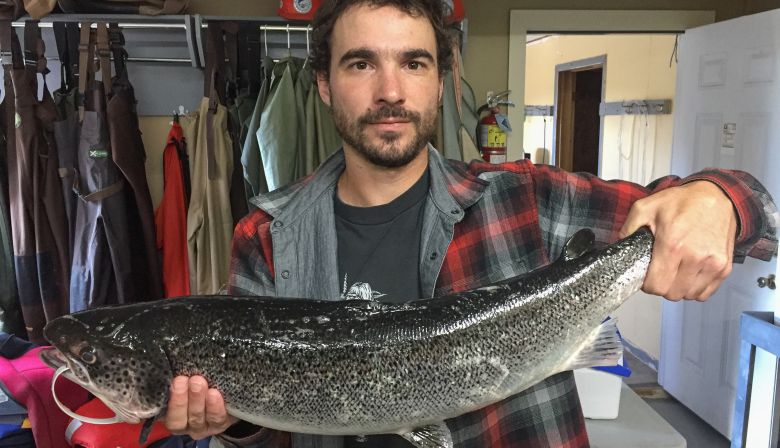 ASF biologist Eric Brunsdon hold an escaped aquaculture salmon captured in the Magaguadavic River
Carr noted that practices have improved: the aquaculture sector has reduced escape events to some degree. But 40 years on, the industry is far from solving the problem. Cooke Aquaculture and the government of Nova Scotia touted a new set of containment practices, developed in Maine, that are now in place in the province. Those protocols haven’t succeeded in preventing escapes in Maine, where wild Atlantic salmon are listed under the federal Endangered Species Act. Almost every year, escapes still show up in the few rivers that are monitored. For instance, 3 escapees were found in the Union River this fall. With the help of genetic technology, they were traced to one of Cooke’s sea cage sites. Once again, the escapes had not been reported.

Globally every year, catastrophic cage failures send thousands of escapees out into the marine environment, and some go on to dilute the genetics of wild Atlantic salmon. Aquaculture salmon live radically different lives and have a radically different genetic makeup than wild salmon. When they escape and interbreed with wild fish, the resulting offspring are demonstrably less fit.

In the case of Rattling Beach, Carr stressed the importance of the ‘precautionary principle,’ which advises that an activity should not proceed if it has potential for harm that has not been disproven. In other words, it is incumbent on the proponent, Cooke, to demonstrate that their activities will not have significant adverse impacts on local wild salmon populations or result in irreversible change. 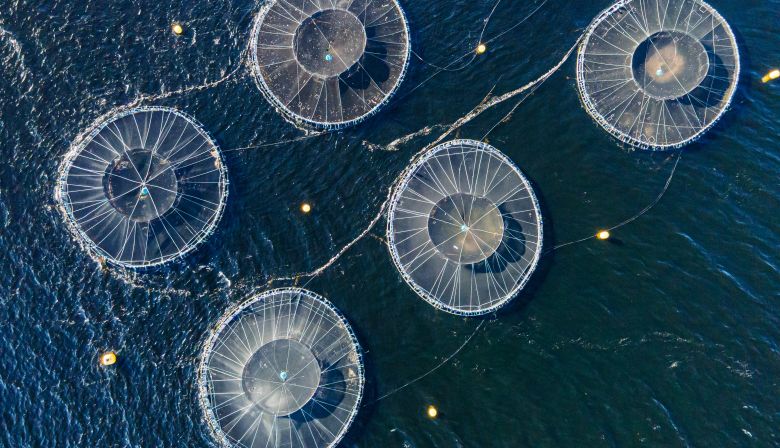 Open net-pen cages near Liverpool, N.S. Tom Cheney/ASF
Wild salmon populations in the rivers near Rattling Beach are not well-studied, but we do know that they are critically low. Aquaculture operations therefore pose an outsized threat. One escaped fish, or one case of disease transferred to the wild population could severely impact the few fish that remain and possibly drive the local population to extinction.

The Aquaculture Review Board, of course, wasn’t created to make final judgements on the industry as a whole. To the chagrin of many Nova Scotians, the panel wouldn’t even investigate why Cooke was allowed to operate illegally at Rattling Beach for 17 years.

Regardless of the board’s decision on lease boundaries, Carr has a clear message for regulators: everywhere this industry operates, there are impacts—on local ecosystems, on wild fish, on other fisheries. If we’re going to allow open net-pen salmon aquaculture to continue in Atlantic Canada, Fisheries and Oceans Canada needs to stand up for wild fish and the environment and help bodies like the Nova Scotia Aquaculture Review Board get the answers to questions left unanswered.