Jun 6, 2018
On a recent visit to the West River Sheet Harbour restoration project, one comment really caught my attention: “Individual salmon smolt have individual personalities.” Wait, what??!! Did I hear this right??

Apparently so. Dr. Christina Semeniuk of the University of Windsor in Ontario and her Laboratory Manager Kevyn Janisse were both at the West River Sheet Harbour site, studying the individual behavior of various wild smolt and trying to understand if it is affected by acidified water or by the liming treatments being used on that system to return the ecosystem to near neutral pH.

It is intriguing research, and a little bizarre to the uninformed. 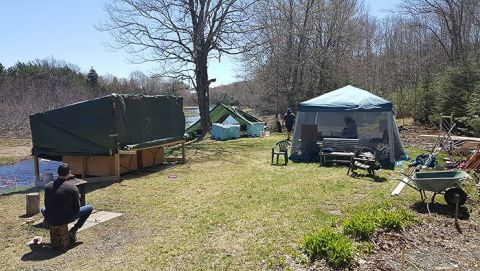 West River Sheet Harbour Camp where Dr. Semeniuk is conducting experiments on Atlantic salmon smolt personality and the impact of acidified water.
Wild smolt are taken from the smolt wheel in the in the main West River which is being treated for acidification and from fyke nets in the untreated West Branch tributary and held in tanks next to the river. 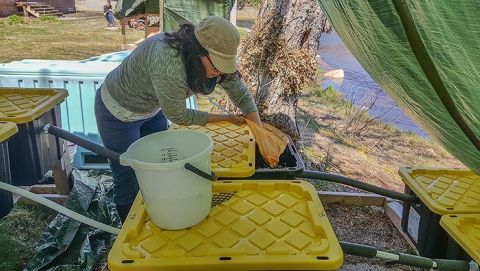 Dr. Semeniuk works with the test setup for smolt personality research.
While waiting for the next test phase to begin, Dr. Semeniuk tells me about the five personality traits they are observing. Those are:
The test tanks are identical, in that they all have the same features and are the same size. There is a cinder block in the center to provide cover, gravel covering the tank bottom and each tank has a GoPro camera mounted overhead, recording all phases of the testing. 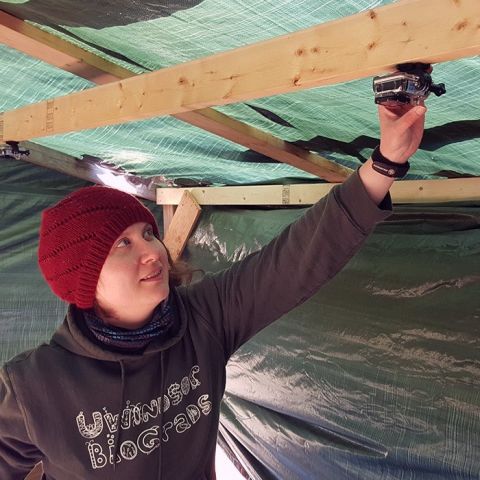 Kevyn Janisse turns on a GoPro camera
The first phase of the testing is to observe how the fish respond to their new environment.

Dr. Semeniuk talks about how different fish display these character types. Some are very shy and hide in the cinder block, some slowly and deliberately explore their new surroundings, some just hunker down in the tank, some move quickly, almost darting around the tank as if trying to escape – and maybe they are. The fish are allowed to adjust to their new surroundings for a half hour.

Phase 2 of the research is the introduction of food and how they react. Fish may be under stress or upset by the new environment, but they still have to eat to survive. How they adjust to the new environment and feed is quite important to the testing. They food used is natural insects and worms found in the environment.

Phase 3, is really interesting. After allowing the fish to ‘relax’ for ten minutes after the food trial, the smolts now are threatened – the threat taking the form of ‘Cletus’, a cormorant decoy. 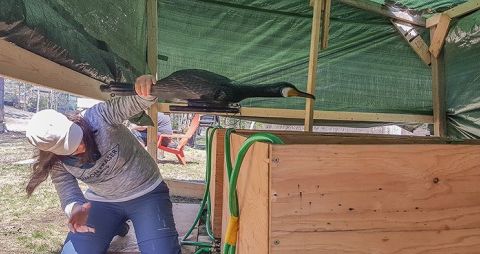 Dr. Semeniuk introduces "Cletus" to the smolt's environment.
How the fish react to a predator is key to their survival. Many years ago, I read a research document that described how salmon that were stressed by acidification had reduced ability to feed, adjust to salt water, migrate and avoid predators. This phase gets to that last point. Some smolts swim up to Cletus, but that is not a good survival tactic. Some scatter for the cinder block and some just take it in stride. All interesting responses.

Phase 4 is the introduction of food again after another 10-minute rest following the Cletis incident. Again, though scared and stressed, a fish still has to eat to survive. How they react can be an indication of the impacts of acidification.

After a 1-hour recovery from all the tests, the smolts are then put into salt water for 24 hours to see how they adjust to the marine environment. Blood samples and gill samples are then taken to be analyzed.

Dr. Eddie Halfyard, who is leading the major restoration work on the West River Sheet Harbour tells me the major crux of the project is really asking how acidification affects personality and physiology and how these interactions may ultimately impact marine survival. The link between freshwater and marine is important.

As Eddie explains, the blood samples are looking at blood osmolality; the balance between water and electrolytes (salts) in the blood. It's an indicator of a smolts ability to deal with saltwater.

The gill samples are looking at sodium-potassium ATPase, an enzyme responsible for regulating salt concentrations in cells by pumping sodium out of gill cells and potassium into gill cells. If it is doing its job, we expect that the bloodwork above would be 'normal' after a 24-hour saltwater challenge. Also, we sampled some smolts before the saltwater challenge looking for the amount of aluminium on the gills.

This is all pretty high-tech stuff and the West River project is on the cutting edge of salmon restoration for acidified rivers. It holds a lot of hope an promise.

So, the next time a salmon refuses your fly, don’t blame yourself, that fish might just not have the right personality.