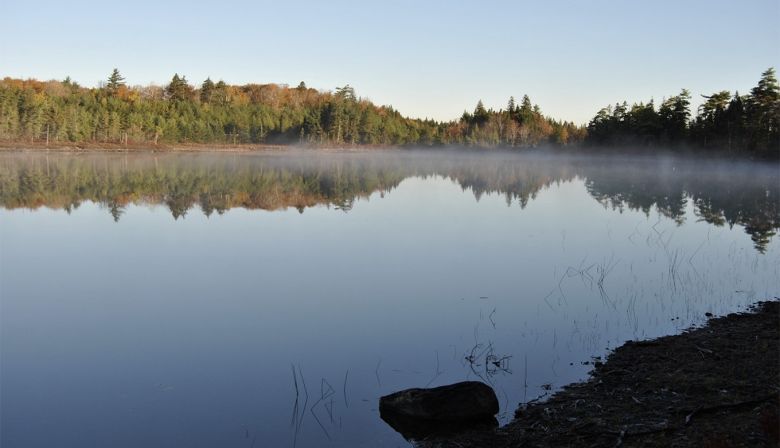 Piper Lake is part of the St. Mary's River watershed in northern Nova Scotia, an important Atlantic salmon river and the focus of major recovery and conservation efforts. Photo Kris Hunter/ASF
On the morning of October 15th I arrived at Piper Lake, just off N.S. Route 374, in rural Pictou County. The normally overlooked lake was buzzing. A team from Nova Scotia’s Department of Fisheries and Aquaculture was running equipment checks and making last minute preparations for a decisive stand against the intentional spread of invasive fish.

People, usually anglers, have done heavy and irreversible damage to freshwater ecosystems in Nova Scotia by dumping in non-native fish species. The LaHave River and Lake Ainsley in the headwaters of the Margaree are just two of the victims of this inherently thoughtless act

Aquatic invasive fish like chain pickerel and smallmouth bass eat and compete with native species who are caught completely off guard by their appearance. They multiply and spread, establishing populations in a wide variety of habitat. Invasive fish alter entire ecosystems and disrupt fisheries at great cost to the public. 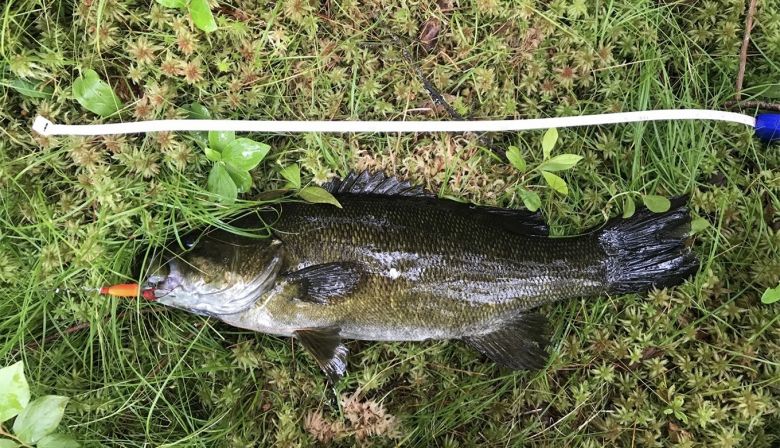 This adult smallmouth bass was caught in Piper Lake in 2019, the first known instance of invasive fish in the St. Mary's watershed. Photo N.S. Department of Fisheries and Aquaculture
A troubling discovery
Last summer, Colin Buhariwalla found himself in the headwaters of the St. Mary’s River with a few hours to kill. As a field technician for Nova Scotia’s Department of Fisheries and Aquaculture, he was expecting to spend the day electrofishing waterways around Antigonish in support of a long term research project, but rainy weather was a safety issue.

Buhariwalla decided to do some angling instead, another way of monitoring lakes and rivers for invasive species. He pulled up to Piper Lake, part of the St. Mary’s River watershed and about a kilometre from the neighbouring East River watershed where chain pickerel are present. Despite this close proximity, the St. Mary’s was, until then, free invasive fish.

Something bit and pulled hard in Piper Lake. When Buhariwalla pulled it to shore he was doubly surprised; it was an invasive, but not chain pickerel - he had landed a smallmouth bass. Buhariwalla knew his catch was a big deal and immediately alerted his colleagues in the department’s Inland Fisheries Division, setting off a rapid response to a potential biological invasion of Nova Scotia’s longest river. 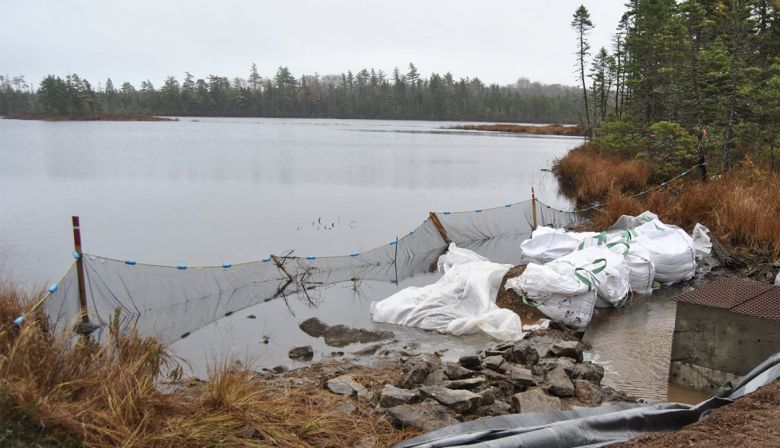 Nova Scotia staff set up a barrier at the outflow of Piper Lake soon after smallmouth bass were discovered there in 2019. Photo N.S. Department of Fisheries and Aquaculture
Contain and delimit
Immediately after the discovery of smallmouth bass in Piper Lake, provincial staff erected a barrier at the outflow, which was already partially blocked by a beaver dam. An electrofishing boat was flown in by helicopter, nets were deployed, and people with backpack electrofishers began sweeping waters downstream.

Anglers fanned out to other nearby lakes and environmental DNA samples were widely collected. The goal was to assess the size of the population in Piper Lake, determine if smallmouth had migrated out, and whether there had been other introductions nearby. 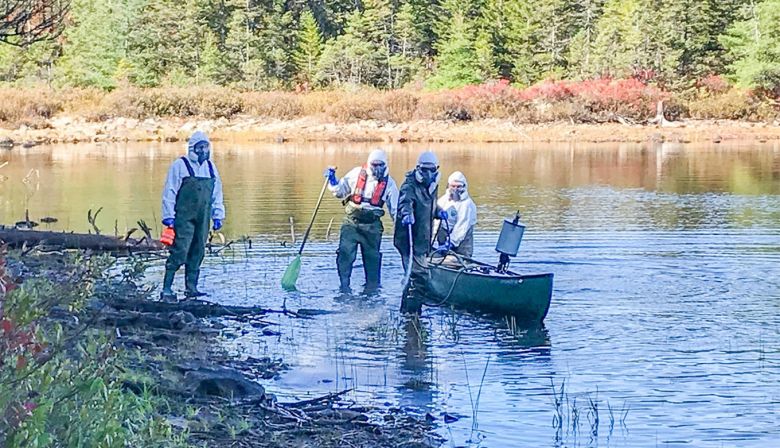 Staff in personal protective equipment apply a diluted rotenone product around the edge of Piper Lake in October 2020. Photo Kris Hunter/ASF
Piper Lake was immediately closed to all angling and enforcement officers were called in. They quickly found evidence of angling around Piper Lake, which prior to the illegal introduction of smallmouth bass had no recreational fishery – a sign that someone knew the fish were here. Investigators identified a suspect, but no charges were ever laid.

After several weeks of work, officials concluded that smallmouth bass were only in Piper Lake and had not spread downstream of the outflow. The population in the lake had been there since at least 2018, maybe longer. Dozens of large adults, 291 young-of-the-year, and 70 juveniles were removed. The search for smallmouth also revealed what other species live in the lake: American eel, yellow perch, golden shiner, common shiner, banded killifish, several dace species, creek chub, and brown bullhead.

Knowing that smallmouth were momentarily contained in Piper Lake, the team at Nova Scotia’s Department of Fisheries and Aquaculture, led by inland fisheries director Alan McNeill, began to look for ways to eradicate bass before they spread. It is accepted knowledge that control efforts for invasive fish species, like catching as many as possible and maintaining barriers, can slow the spread, but are not effective for eradication. The situation spilling out of Miramichi Lake in New Brunswick is a poignant, recent example.

As winter approached, provincial staff tried to use the bathymetry of Piper Lake against smallmouth bass. With a maximum depth of 3 meters, pumps were used to suck as much water out of the lake as possible, drawing levels way down in hopes of triggering winterkill – when water under ice is depleted of oxygen. 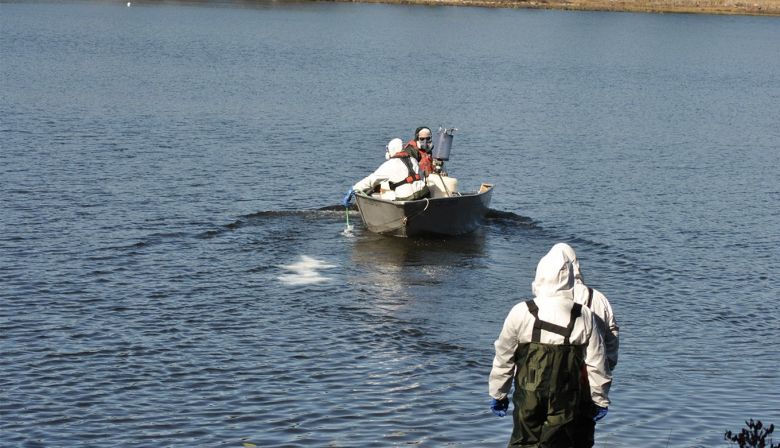 A small boat running transect lines disperses rotenone under the surface of Piper Lake. Photo Kris Hunter/ASF
At the same time, McNeill and his team began looking at chemical eradication using rotenone, the most common method of invasive fish control and eradication worldwide done regularly in other parts of Canada. Getting needed permits, consulting with First Nations and stakeholders, and planning a rotenone treatment take time, and if winterkill didn’t work, officials didn’t want to risk the spread of smallmouth any longer than necessary.

When spring 2020 came, and field crews were able to return to Piper Lake, they found that not only had smallmouth survived, but they recently spawned in the lake, introducing a new year class and increasing abundance. At this point, it was decided that eradication using a rotenone product was the only effective and safe option left.

While Nova Scotia has accepted the authority from DFO to authorize the use of rotenone, to avoid perceptions of conflict of interest as the proponent and regulator, the inland fisheries team prepared an application and submitted it to Fisheries and Oceans Canada’s aquatic invasive species program. Barely 12-months since the discovery of smallmouth bass in the St. Mary’s watershed, permits and approvals were in place to eradicate them. 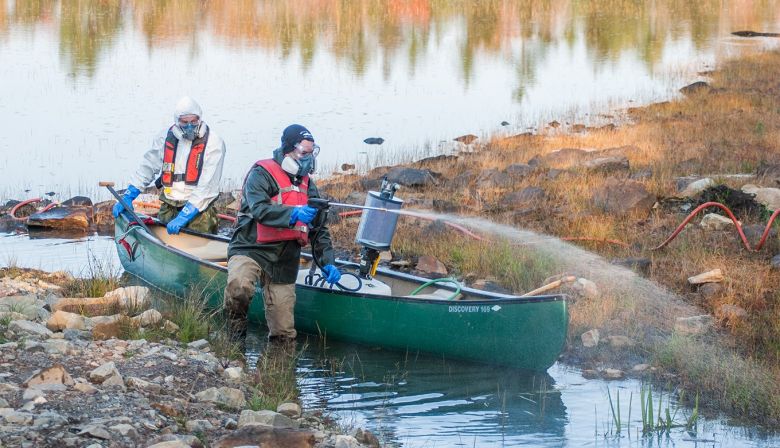 With final safety and equipment checks complete, under clear October skies, the Nova Scotia government crew began mixing five litres of rotenone product with 95 litres of water in a custom built dispenser. Once the reservoir was loaded in a canoe, a team of two began walking it around the edge of Piper Lake and spraying the shoreline. The container was transferred to a small boat with an outboard motor and using GPS guidance a crew ran transect lines back and forth on the lake, dispensing the rotenone under the surface. Fish began to die quickly.

Soon after the treatment stopped and the all-clear was given, people started collecting mortalities for disposal at an approved site. As the clean-up continued over the next few days, sentinel fish held in cages in the lake were checked – all dead – and sentinel fish held in cages below the treatment area were all alive. Things  appear to have gone according to plan, with hundreds of smallmouth bass among all the other fish collected, however McNeill and his team are not ready to declare success just yet. 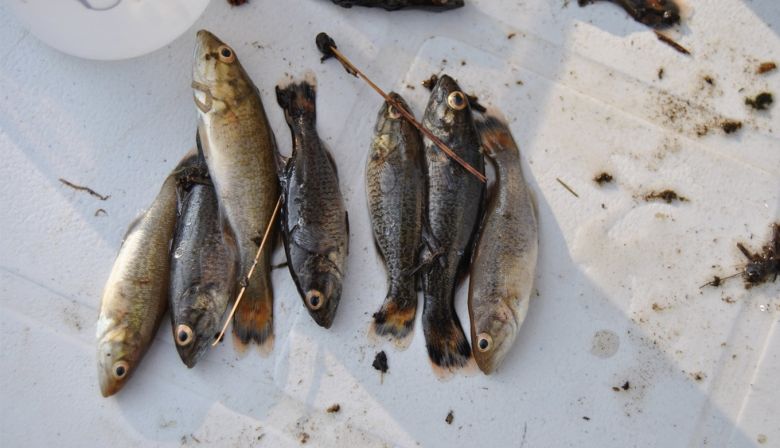 Juvenile smallmouth bass were collected for analysis after the treatment of Piper Lake. Photo Kris Hunter/ASF
Gill netting and boat electrofishing will be carried out later this month and again in the spring of 2021 to be sure that no bass remain. Elsewhere in Nova Scotia, the spread of invasive species continues. For example, smallmouth bass were discovered earlier this year in Dobsons Lake, part of the Cole Harbour River system, in Guysborough County.

As Nova Scotia has demonstrated, eradication using rotenone is a powerful and effective tool for dealing with invasive species, but its a reaction to an entirely preventable problem. We all know that second hand smoke can kill, and no one wants to be a litterbug. It's time we learned out lesson about invasive fish too.
Kris Hunter is ASF's program director for Nova Scotia and Prince Edward Island. He can be reached at khunter@asf.ca.