On the Briny Ocean Toss

ASF's Don Ivany holds a sonic receiver before it is deployed into the icy waters of the Strait of Belle Isle. ASF Photo
FRANÇAIS

The small boat dipped and rolled, making it hard for Don Ivany to move around. ASF’s director of Newfoundland programs says he even got a little seasick, something that doesn’t usually affect him. Working with commercial fisher Loomis Way, Ivany was locating receivers in the Strait of Belle Isle—part of ASF’s efforts to detect acoustically tagged Atlantic salmon smolt and adults.
In the video above, the progress of Atlantic salmon smolts from their home rivers, the Miramichi, Restigouche, and Cascapedia  plus the rivers of northeast Prince Edward Island can be followed as they make their way across the Gulf of St. Lawrence to the Strait of Belle Isle and beyond, into the Labrador Sea. This shows the correlation between that movement and increasing temperatures of ocean water as Spring progresses.


The receivers are hitched on an anchor line, fixed about 10 metres below the surface. Ivany navigates to the right coordinates, finds the buoy, then hauls up a 2-foot black plastic cylinder. After downloading the data, he stores the receivers until next spring, when they’ll be set for the 2021 smolt migration. “In good weather, the work is pure joy,” Ivany says, “but when it’s blowing like last August it can be tough. Each wave is like having a 5-gallon bucket of cold water thrown on you.”

Whether it rains or shines, Ivany knows the data collected during his briny toss will make for happy co-workers back in St. Andrews, New Brunswick.
ASF is engaged in a broad effort to track Atlantic salmon on their migration from North American rivers to their North Atlantic feeding ground and back. The Strait of Belle Isle (or SoBI) receiver arrays are only one element, but a crucial one. 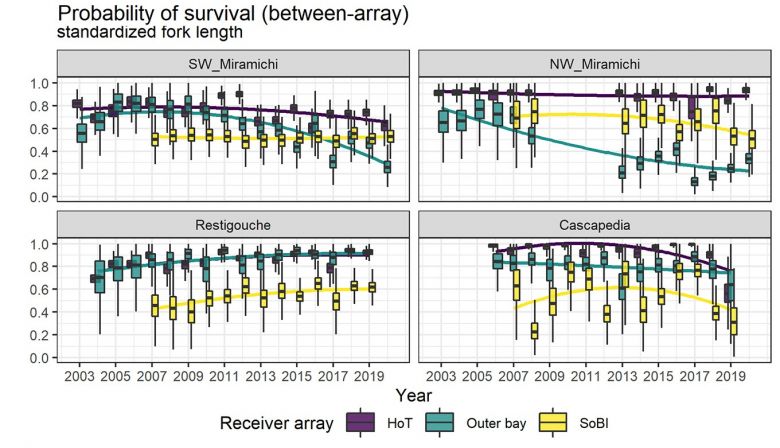 ASF has been tracking Atlantic salmon smolts at sea since 2003 as part of the research to discover where mortality is taking place. This is vital, since the survival rates of Atlantic salmon at sea have dropped since about 1990. In that time some conditions have changed - such as the vast increase in predatory striped bass in the Miramichi estuary and lower river.
Once analyzed by ASF biologists Jason Daniels and Graham Chafe, the data from the SoBI arrays provide an astonishing amount of information on smolt migration (see figure 1). This year, 160 fish were tagged on the Miramichi, thanks to Jon Carr and son Evan, working as a team under Covid restrictions. Around 50 days later, 12 of those tagged fish, 6 from each of the Northwest and Southwest Miramichi rivers, were picked up by the SoBI arrays. It may not seem like much, but Daniels and Chafe say that these detections are critical to understanding survival and behaviour of migrating Atlantic salmon.

Over the last 17 years, ASF receiver arrays have picked up around 20 million “hits.” The biologists are quick to point out that this includes repeats, signals picked up from neighbouring receivers, as well as other tagged fish. For example, a number of cod were picked up recently. They were traced to a DFO researcher who happened to have recorded a few ASF tags on their own receivers.

Where the greatest number of smolts traverse the Strait of Belle Isle between Newfoundland and Labrador varies from one year to the next. ASF's tracking research has been the first to make the discovery and give details.
Tagged fish can be missed when a receiver is lost to fishing gear or severe weather. ASF has been testing a receiver that is anchored much deeper, close to the ocean floor and out of the way of fishing gear and storms. Triggered electronically, the receiver pops up to the surface for data collection. These receivers can remain in place year-round, saving time and effort. Ivany says the small cylinders popped up reliably, but were tricky to find, especially in the waves and fog. 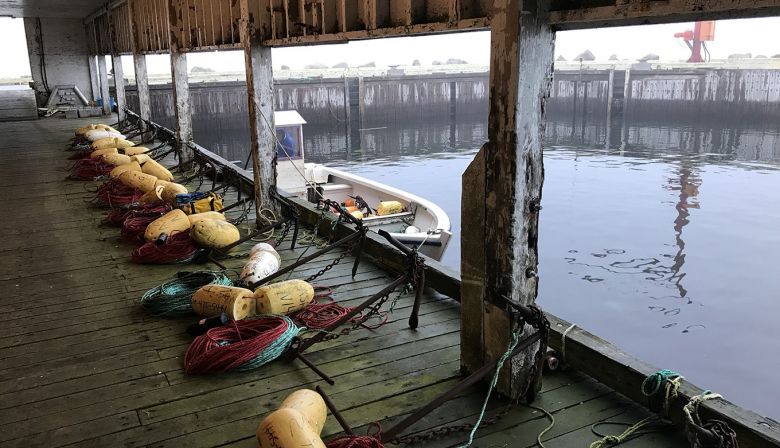 It is a major undertaking for ASF to deploy and months later to retrieve the sonic receiver arrays across the width of the Strait of Bell Isle. After being retrieved, the data is downloaded and then processed by researchers at ASF. Photo Don Ivany
For Ivany, the important data that the receivers provide for ASF’s tracking work is only one reward. Back at Loomis’ house after a long day on the water, Ivany's host would often bring out his guitar for an impromptu “kitchen concert.” Ivany has developed a close friendship with Loomis and the people of Green Island Cove, a small village of 185 souls, all connected to the lobster, halibut and cod fisheries.
o
Above: Loomis Way provides the boat that deploys and retrieves salmon sonic tracking receivers in the cold waters of Strait of Belle Isle between northernmost Newfoundland and Labrador.

After a cold, windy day out on rough seas on the Strait of Belle Isle, Loomis Way broke out his guitar and, accompanied by his wife Brenda on a Newfoundland “Ugly Stick,” began singing “Coming Home to Marry a Newfie Girl.” Pedro Nilo, a biologist with DFO’s Aquatic Sciences division, based out of the Maurice Lamontagne Institute in St. Flavie, Quebec, had been out with ASF’s Don Ivany and Loomis that day downloading data from receivers on the SoBI array. He noticed Loomis had a Cajon Drum, a Peruvian box percussion instrument with which he was familiar. He joined in for the impromptu singsong. Video by Don Ivany

“I look forward to heading up the Northern Peninsula each spring,” Ivany says. “It’s my first real field work after a long winter. The scenery is beautiful, the work important, and the people are warm and welcoming.”