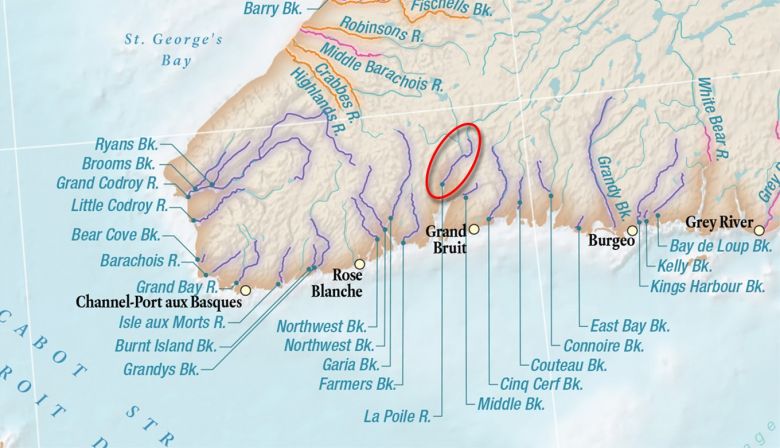 The La Poile River is located on Newfoundland's south coast.
Take the ferry from North Sydney, Nova Scotia, to Port aux Basques, Newfoundland and Labrador, then follow highway 470, weaving through the sparse and rugged landscape of southwest Newfoundland to the end of the road at the community of Rose Blanche. From there it’s a coastal ferry ride to the outport of La Poile (population: 95), then another 45 minutes by boat to the relocated settlement of North Bay.

From here, people either fish the final five kilometers upstream to Salmon Hole Lodge or hop on one of the side-by-side ATV’s run by the guides who work there.
The La Poile River is remote, there’s no cell reception, but records indicate Atlantic salmon are plentiful. 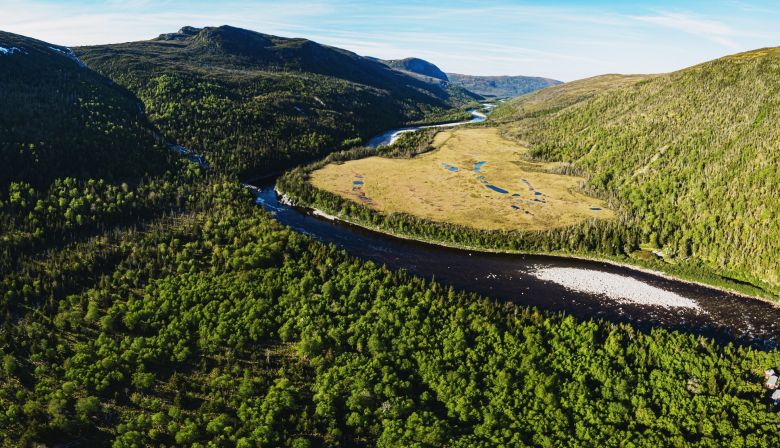 An aerial view of harsh and beautiful landscape of the La Poile River, with Salmon Hole Lodge in the lower right corner (Shaun Lowe Photographic)
Salmon Hole Lodge owner Scott Smith has been connected to the South Coast of Newfoundland since the late 1960s, when his father, a veterinarian from Kentville, Nova Scotia, purchased land on the La Poile.

In 1983, Smith inherited the property and turned it into an outfitting business. He has counted every day of fishing and every salmon caught since then. “The catch result for that year divided by the number of rod days equals catch per rod day,” says Smith. It might not withstand strict scientific scrutiny, but Smith’s measurement criteria have remained constant over time. The data show good years and bad. But overall, the trend is positive: on average, the years 2000-2015 saw many more fish than 1985-1999. 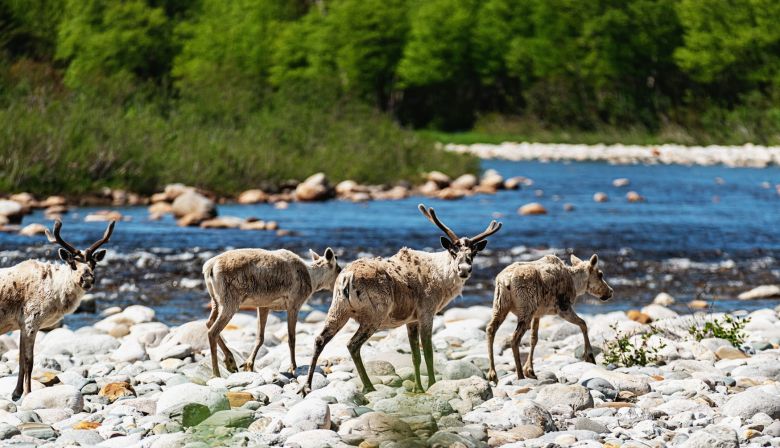 Woodland caribou at the river’s edge (Shaun Lowe Photographic)
Unfortunately for Smith, a decision made over a decade ago to lump 104 salmon watersheds along Newfoundland’s South Coast into a single “designatable unit” has put his business at risk of closure.

There are 16 “designatable units” of wild Atlantic salmon in Canada. In 2011 the Committee on the Status of Endangered Wildlife in Canada (COSEWIC) assessed each one and found the South Newfoundland population met criteria for Threatened status.

The experts recommended to DFO that South Newfoundland and eight other populations be protected under Canada’s Species at Risk Act (SARA). Now ten years later the department has alerted people they are preparing to decide. A Threatened designation would halt all fisheries and set off a recovery planning process led by DFO.

It might sound like good news, like a guarantee of protections and new resources, but experience and evidence indicate otherwise. There’s a major gap between the purpose and reality of SARA. For example, reviews have found that protection doesn’t often halt decline or lead to recovery. 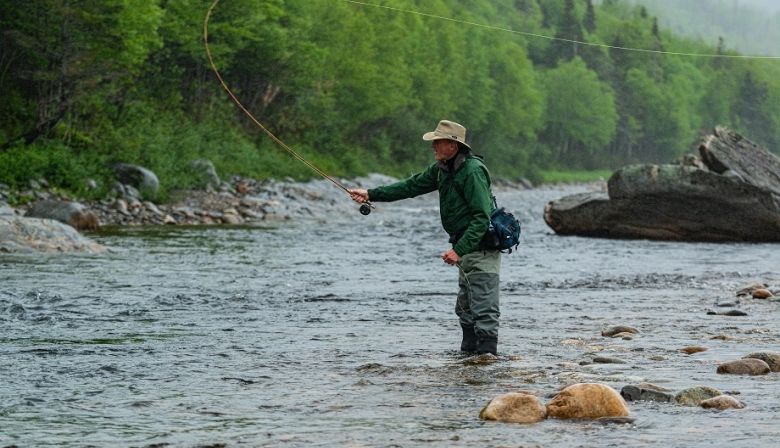 Scott Smith fishes the La Poile (Shaun Lowe Photographic)
In South Newfoundland, SARA would be a particularly bad fit. COSEWIC found the population there dropped by 36 per cent since the early 1990’s, but the assessment was principally based on four monitoring sites, all in the east, including two, the Conne and Little, in the heart of Newfoundland’s troubled aquaculture industry.

DFO’s own reviewing scientists admit the sites “may not be representative of the entire [area],” a claim that anglers and outfitters like Scott Smith can prove. Because DFO maintains no counting facilities west of Bay d’Espoir, Smith says, “The only way to track the health of the salmon population is to keep track of catches.” His record from Salmon Hole Lodge is unique and valuable.

Relaxing on the deck of Salmon Hole Lodge
Scott Smith travels to Salmon Hole Lodge every summer to fish, meet guests, and catch up with staff. Covid made things different. “Last year we didn’t open for the first time in over 50 years,” he says. But that didn’t stop Smith from making the journey himself, a visitor from inside the Atlantic Bubble.

The best fishing on the Lapoile is usually from mid-June until the end of July, so Smith didn’t know what to expect when he arrived in the last week of August. He was delighted to find the river full of salmon. He hooked and released his limit in an afternoon of fishing.

“Fly fishing for Atlantic salmon is part of our East Coast culture,” he says. “It would be a tragedy to lose this.”


ASF and our partners like the Salmonid Association of Eastern Newfoundland believe that conservation takes people. Learn more about our campaign to keep rivers open and conservation alive and well. Visit www.peopleforsalmon.com