Maine is home to the last runs of wild Atlantic salmon in the United States. Join hosts Charlie Schmidt and Caroline Losneck as they travel the state, talking with Mainers about the history, decline, and recovery of the 'King of Fish.'

The Saving Salmon Podcast is also available on Apple Podcasts and Stitcher.

Wild Atlantic salmon once thrived in the U.S. from Long Island Sound to the Canadian border. Today the species is hanging tough in a handful of Maine rivers. In Episode 1 Charlie and Caroline look at the life history of this incredible species and the challenge of survival in a changing world.

People and Atlantic salmon have a relationship that reaches back thousands of years. In Episode 2, Charlie and Caroline uncover the connection between wild Atlantic salmon and humans - from the first people, to the first settlers, to the die-hard anglers who are hopeful for the return of a great American tradition.

Blocked by dams and harmed by pollution, wild Atlantic salmon in the United States face an uphill battle. In Episode 3, Charlie and Caroline speak with the dedicated conservationists, scientists, and volunteers who are re-opening rivers and keeping Maine's unique salmon populations alive.
The Saving Salmon Podcast is a production of the Atlantic Salmon Federation thanks to generous support from the National Oceanic & Atmospheric Administration, dedicated to a bright future for wild Atlantic Salmon.

Meet the hosts of the Saving Salmon Podcast 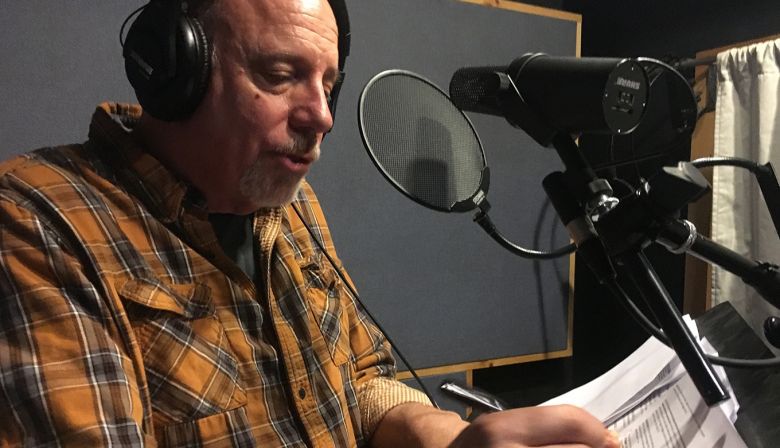 Photo Caroline Losneck
Charlie Schmidt is a freelance science writer based in Portland, Maine. Charlie grew up in Argentina and Connecticut and holds a master’s degree in public health. Prior to taking up the pen full-time, he worked as a toxicologist. His writing has been widely recognized including honors from the Society of Environmental Journalists and the National Association of Science Writers. An avid musician, Charlie is a member of the renegade Portland rock band The Joint Chiefs. To learn more about his work visit www.schmidtwriting.com. 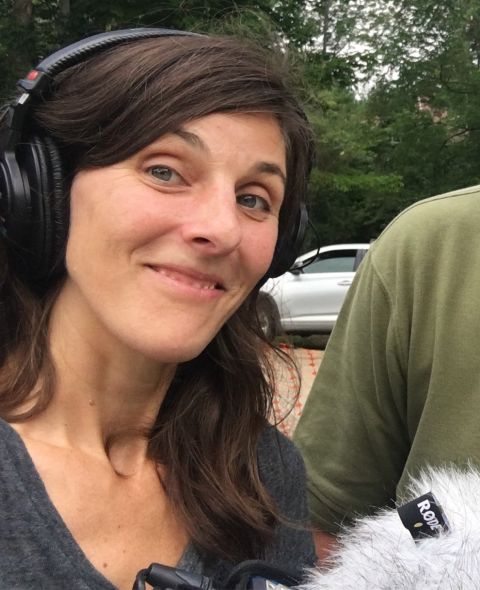 Photo Caroline Losneck
Caroline is a documentarian, radio producer, and filmmaker. Her work is featured on Maine Public Radio, NPR, Marketplace, BBC, and WMPG Community Radio. Her films have appeared in the New York Times, Camden International Film Festival, Rooftop Films, and museums. Caroline’s work is often about people and places on the margins. Through stories, oral histories and recreated narratives, she tells tall tales and truth. Caroline grew up on the shores of Lake Erie in Cleveland and now lives in Maine. To learn more about her work visit www.carolinelosneck.com.

Some of the voices you'll hear 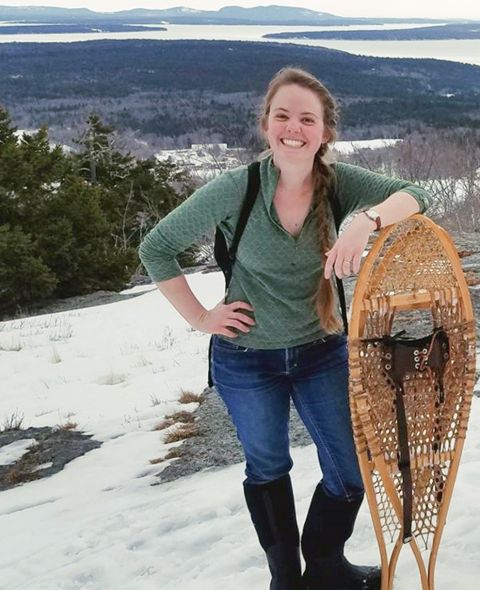 "The salmon’s development is entirely temperature related. As the temperature in the stream increases through the winter and spring, that is what cues the eggs to develop into alevin.” Photo submitted 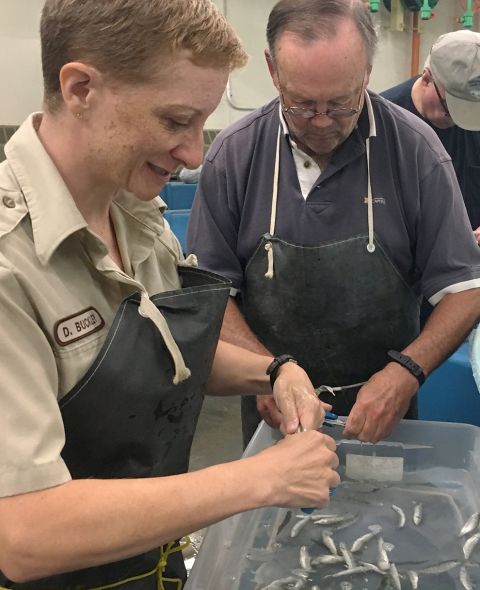 "Of the more than 30,000 known fish species in the world, only 250 or so have the ability to move between fresh and salt water." Photo Caroline Losneck 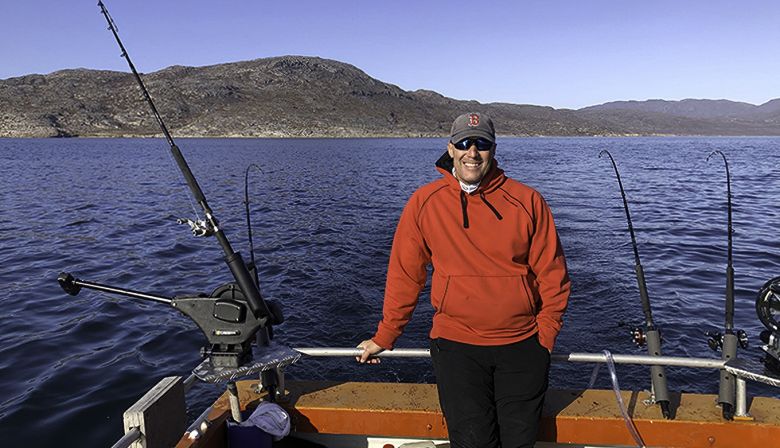 "The rivers are only so big. This species goes out into the ocean where it can grow really fast and really big. They combine the pros and cons of both environments into one life history." Photo NOAA 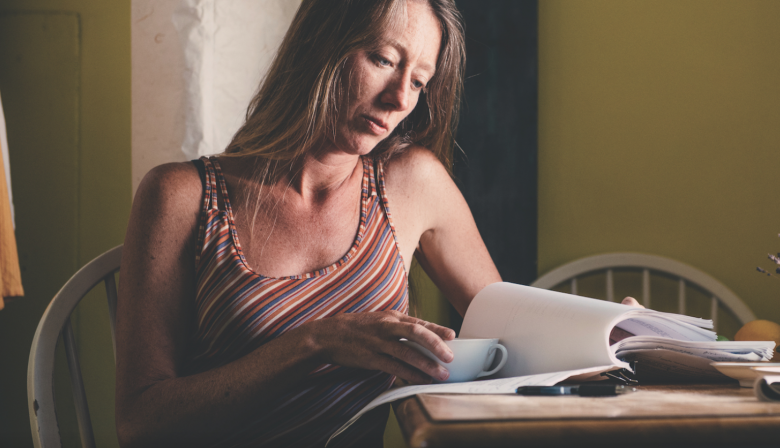 "Pray for time, river, and cold enough to race upstream, sweep the sand into nests, and loose young alevin to the hum." Photo Maine Women Magazine 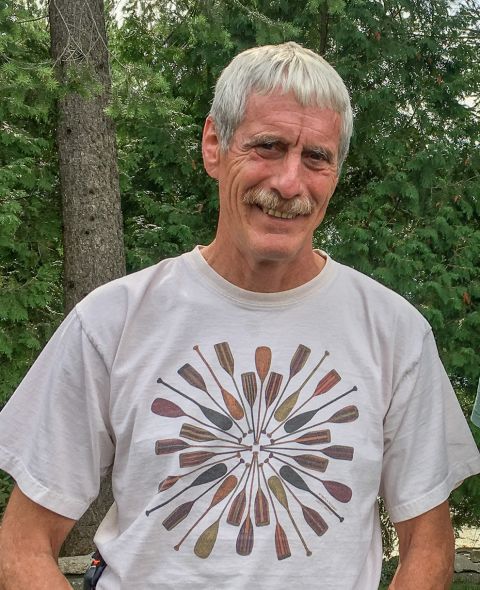 "Tribal members harvested salmon right here where the Milford Dam is now, by the tens of thousands." Photo Caroline Losneck 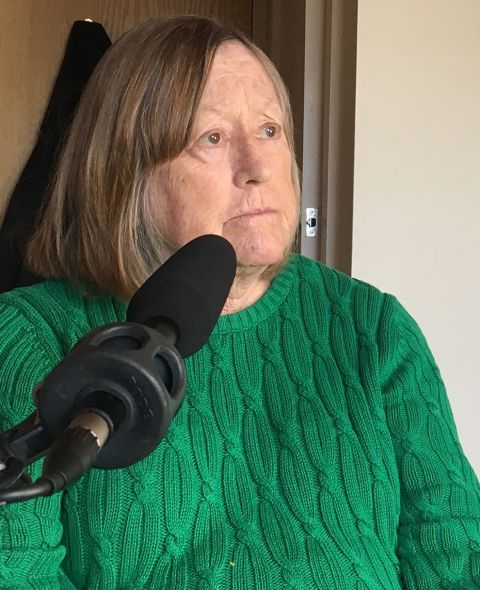 "Salmon was a special occasion fish. It was something your uncle or father or brother would go out fly fishing for, maybe in the Penobscot." Photo Caroline Losneck 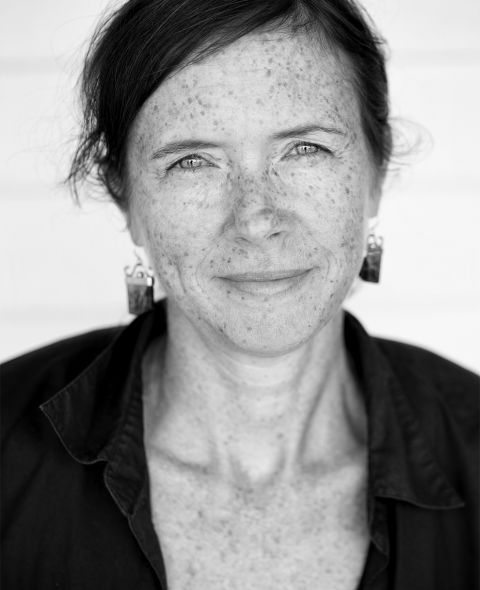 "Presidents were sent the first Penobscot salmon in 1912. In following presidencies we have records of the presidents sending a thank you, noting when and how the fish was served." Photo Winky Lewis 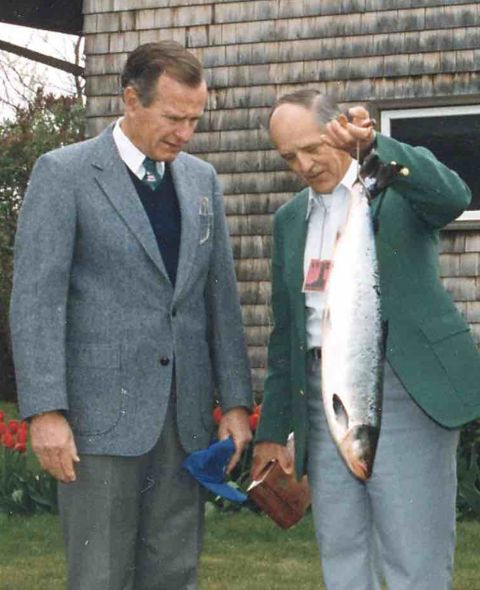 "I was fortunate to take the last presidential salmon in 1992." Archive photo 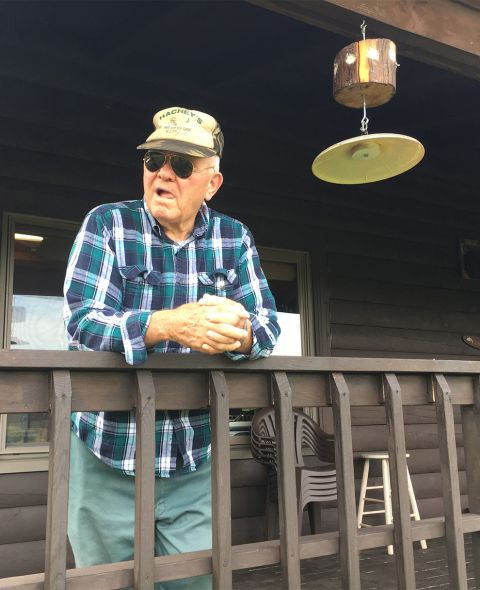 "The camaraderie of the Veazie Salmon Club was great. Members came, sat down with coffee." Photo Caroline Losneck 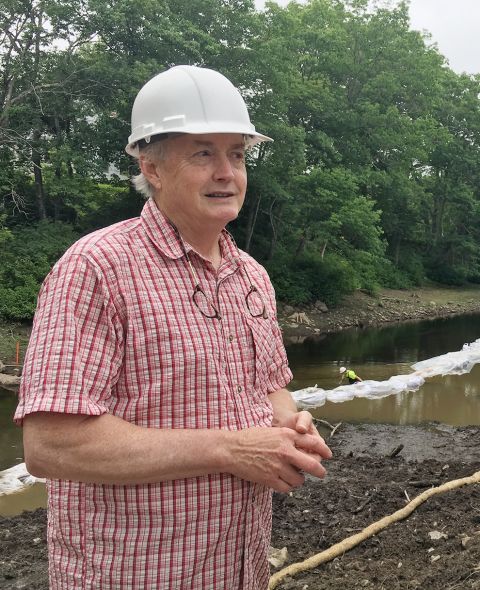 "This Cooper's Mills Dam had a perfectly good fishway at one time, but it has become obsolete. Here in Maine we have 90 per cent of the habitat closed off by old dams." Photo Caroline Losneck 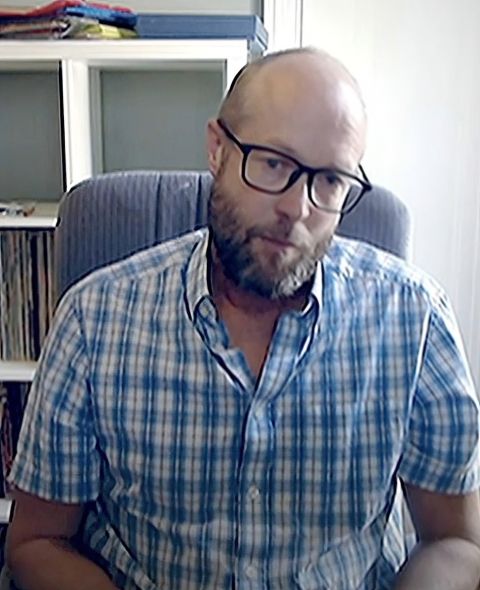 "By the late 19th century we were depending on hatcheries to mitigate the loss from forestry, mining, pollution. That is one of the sad legacies of the technology." Photo submitted 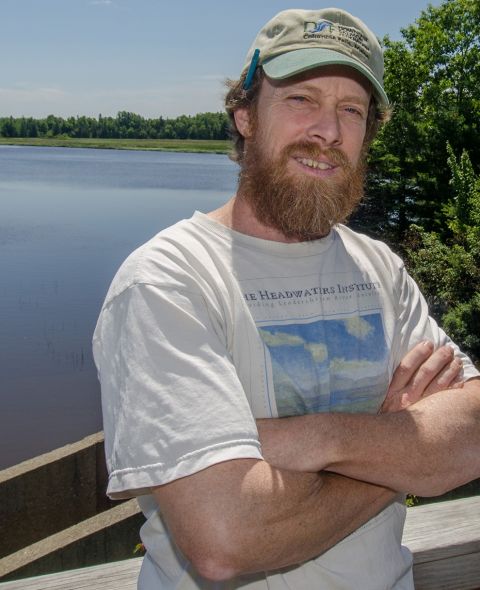 "Hatcheries are part of the reason we are in our present situation…but now they are the lifeline of the specie. We are trying to reduce the domestication of these fish in the hatchery make them as wild as possible." Photo Tom Moffatt/ASF 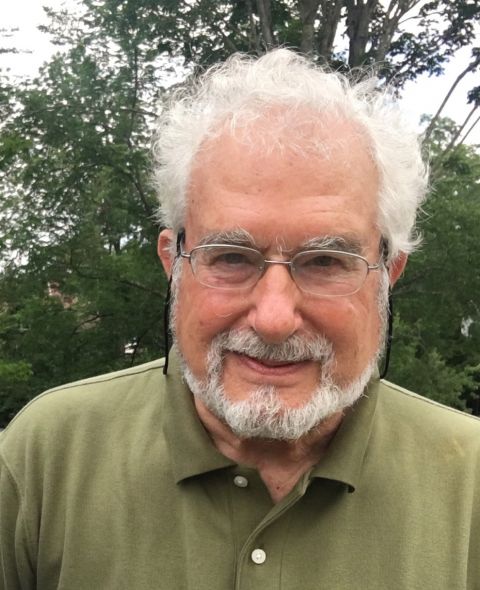 "Getting rid of the Coopers Mills Dam, a big impediment to upstream migration, was a real step forward. We want to see this area as a park, and a place for recreation." Photo Caroline Losneck 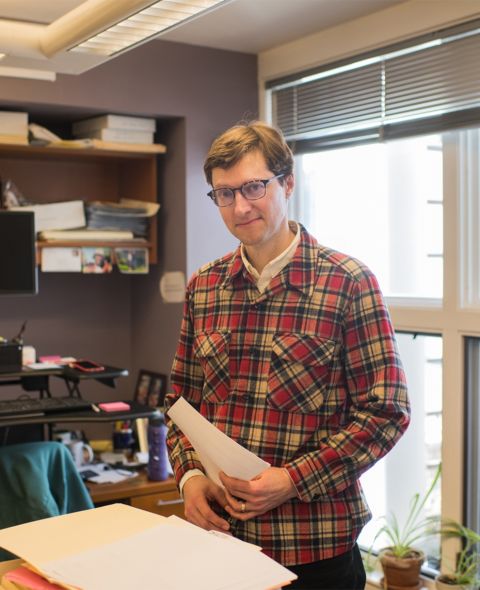 "Like every living thing, we always come home." Photo University of New England

The Saving Salmon Podcast was produced thanks to a grant from the National Oceanic and Atmospheric Administration in recognition of the International Year of the Salmon.