Don Ivany, ASF Director of Programs for Newfoundland and Labrador

Aug 29, 2018
There was an overwhelming sense of excitement as we all sat down at the board room table last week at the Bay St. George South Area Development Association (BSGADA) office in McKay’s, NL.

This tiny but very active rural community is located on NL’s Southwest coast in St. Georges Bay, which is also home to approximately ten major salmon rivers. However, Harry’s River is the only one of the ten that currently has a counting facility.

No new data has been available for the rest of the rivers in this area since about 2008, when DFO conducted their last annual snorkel survey. Recognizing a need for more science, the BSGADA thought it was time to start doing these snorkel surveys again.

In preparation, and under the leadership of their current president, Eric Legge, the association decided to partner with a private group called Interval Associates, led by well known naturalist and president, Kathleen Blanchard. Together they submitted a joint proposal to the Atlantic Salmon Conservation Foundation last fall for funding support to conduct the snorkel surveys, and to also conduct some habitat surveys, and creel surveys. 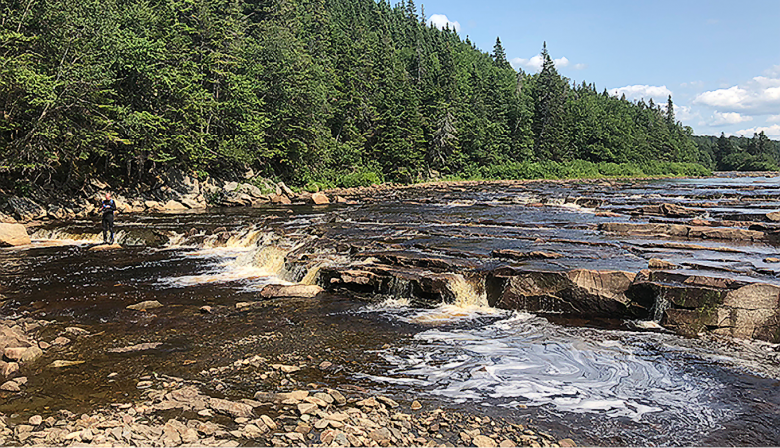 Middle Barachois River. A snorkel count is the best option for assessing the river's salmon returns and likely egg production. Photo Don Ivany/ASF
Their application was successful and for the past few months under the name ‘Living Rivers’, they made plans to organize and conduct these surveys. The habitat and creel surveys began back in June, while the snorkel surveys were scheduled to take place during mid-August, at the same time they would normally have taken place in previous years.

Rex Porter, who for many years was Section Head of DFO’s Salmonid Division, before his official retirement in 2005, was contracted to help organize and coordinate the snorkel surveys. His previous experience in leading such surveys was a great asset to all involved.

Recognizing that some twenty plus people would be required to conduct the surveys over a five-day period Rex immediately put out a call for other volunteers to help out. The response was fast and a number of groups like the Qalipu First Nation, the NL Conservation Core (Green Team), and the Atlantic Salmon Federation were quick to come onboard. Rounding out the request were a number of JCP Students, along with DFO who provided all the wet suits and snorkeling gear, as well as a number of Guardians and Fishery Officers who knew these rivers well.

On monday of last week, everyone met at the BSGADA office for the first time to begin the week-long survey and it was plainly obvious that everyone was anxious and excited to hit the water.

First however, some important preliminary training was required. The first morning involved in-class training regarding proper snorkel survey procedures and various techniques involved, as well as safety and emergency training. This was followed in the afternoon by some actual trial runs on Crabbes River to insure everyone was conducting counts properly, and that the counts were accurate. Individual survey crews were then established based on the physical fitness of individuals, and the extreme difficulty involved to access and swim various sections of the river. Each crew consisted of four or five swimmers (more on larger pools), and a recorder.

Each crew also had a team leader who was responsible for the overall safety of the crew, as well as insuring that the surveys were conducted properly and the data collected was recorded appropriately.

The second day started with each of the four teams involved being strategically dropped off at predetermined locations along Middle Barachois River and Robinson’s River, to begin the section of river assigned to them. Each team was responsible for covering a minimum of 8-10 kms per day, and up to 16 kms per day on some sections assigned to them. The first two days of the survey went great despite some warm air temperatures. Then the weather forecast changed and predicted heavy rain for the next two days, which would have threatened the survey had it materialized. Thankfully someone up above must have been looking out for us because the rain did not come, and we were able to complete the rest of the survey by Friday as scheduled. 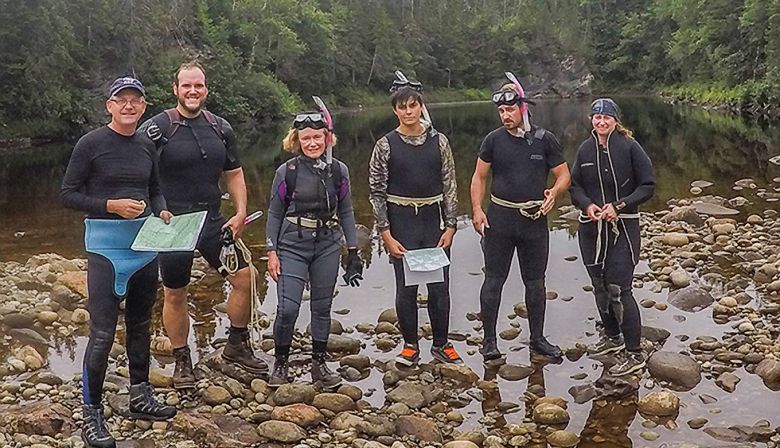 Checking map and GPS coordinates at beginning of site just below the falls on Robinson’s River. In the photo from left to right: Don Ivany, Zack Burrows, Kathleen Blanchard, Bailey Hulan, Jordan Locke, and Sherry Pittman
Except for an odd blister or two and some minor bumps and bruises along the way there were no serious injuries encountered, which is always a big plus. It should be noted that these surveys are not for the weak and there are many risks involved along the way. In fact, completing these surveys was like completing an extreme obstacle course and marathon combined. As one of my crew members said one day, if this doesn’t kill you it will make you stronger. No wonder than that for everyone who participated in and completed the survey last week there was a great sense of accomplishment. Not just knowing they had completed an extreme endurance test but that, collectively they had helped complete the overall objective of collecting some very much needed science on the status of adult returns in those rivers this year. Science that will hopefully lead to better management decisions regarding these stocks in the future.

At the end of our section on Barachois River near the Trans Canada Highway. Fom left to right: Don Ivany, Ben Andrews, and Zack Burrows.

Not only was it a lot of fun for everyone who participated in the surveys last week, but for many it was a life changing experience. Being able to snorkel these rivers and see wild Atlantic salmon up close and personal in their underwater world was akin to swimming with sea turtles, or whales and dolphins. Being able to travel remote sections of these rivers that have seldom been seen by others, and to soak up the splendor and tranquility was beyond compare. To quote Zack Burrows, with Interval Associates, who participated in the survey,…. “

This was an amazing experience, I truly believe this past week has been the most fun I have had at work – if you can even call it work”.

As for me personally, it was great meeting new people and developing new friendships, while also getting to renew some old acquaintances. But perhaps more importantly it was about building new partnerships with individuals and groups who share a common passion and vision. It was about ensuring our ‘Living Rivers’ and the wild Atlantic salmon that swim in them will continue to do so long after most of us are gone. 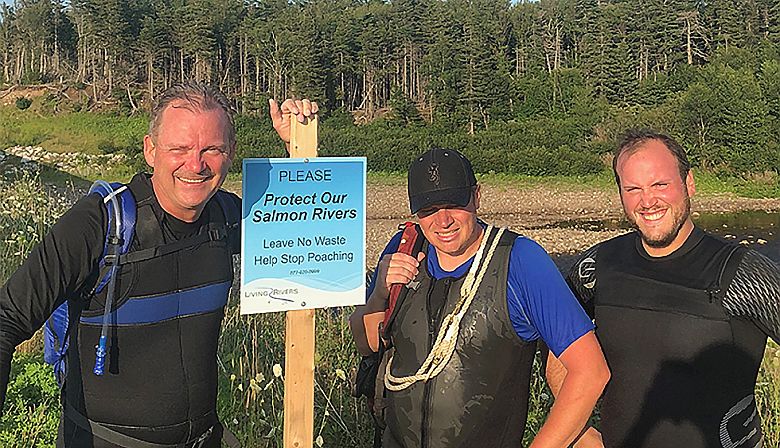 At the end of our section on Barachois River near the Trans Canada Highway. From left to right: Don Ivany, Ben Andrews, and Zack Burrows.