Jun 13, 2019
Cartographic project combines artistry and accuracy to tell a visual story of the state of Atlantic salmon 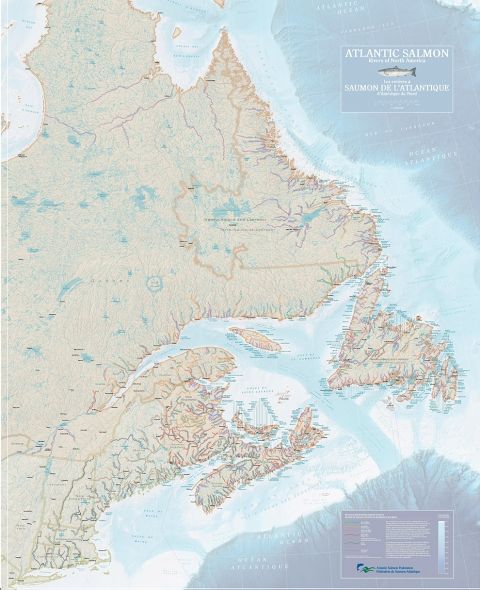 The full map published by the Atlantic Salmon Federation is 36 in. x 48 in. (91 cm. x 122 cm) and includes approximately 1,100 names rivers and streams.
To mark the 2019 International Year of the Salmon, ASF teamed up with As the Crow Flies Cartography to produce a comprehensive map of North American Atlantic salmon rivers. A copy was included in every issue of the Summer 2019 Atlantic Salmon Journal as a gift to members and supporters.

This is the first major cartographic work on wild Atlantic salmon since 1978, when ASF published its original map of continental salmon rivers, and for the first-time information about the health of populations in every single river is incorporated.

This short guide is intended to answer frequently asked questions about the map and its meaning.

Where did the information come from?

The map is based on information from four sources: the North Atlantic Salmon Conservation Organization (NASCO), agencies of the United States government, Fisheries and Oceans Canada, and the Atlantic Salmon Federation.

In 1989, NASCO, which is an international treaty organization comprised of countries where wild Atlantic salmon are present, established a database of salmon rivers. Member nations, including Canada and the United States, were asked to submit lists and by 1995 approximately 1,800 Atlantic salmon rivers on both sides of the Atlantic Ocean had been identified, a figure that has grown to about 2,500 today.

Considering that ASF’s new map contains nearly 1,100 named rivers in North America, the relatively small number logged in the NASCO database can be partially explained by the organization’s definition. The parties agreed that a river is a watercourse that empties into tidal waters. For example, in Canada’s latest submission to the NASCO rivers database, the upper St. John River in New Brunswick was listed as a single entity although there are at least six significant, salmon bearing tributaries.

That’s where ASF’s data came into play. In 1999, the late John Anderson, ASF’s Vice President of Operations at the time, compiled a comprehensive Atlas of North American salmon rivers. ASF staff cross-referenced the river lists provided to NASCO with the Anderson atlas and added in missing tributaries and streams. In order to be consistent, tributaries added in by ASF were assigned the threat status of the mainstem river they entered. 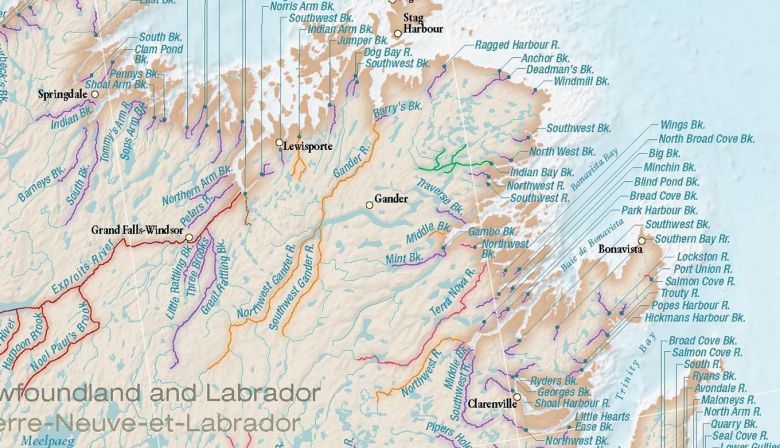 What do the classifications mean?

In order to advance its goal of restoring abundant salmon population where degradation has occurred, and preserving existing healthy populations, parties to NASCO devised a classification system for the rivers database. Because different countries use different measures to assess population health, it was determined that standardization would be useful to make international comparisons.

There have been revisions to the classification system over time, with the most recent occurring in 2016. Recent changes have involved a move away from determining population health based solely on the number of returning salmon, commonly known as a conservation limit. For example, a river might meet its conservation limit through a reduction in fishing which was triggered by other fundamental problems in the watershed.

The conservation limit attainment and impacts assessment are scored on a scale of zero to three, with three representing the highest level of risk. The figures are combined to form a stock classification score and the resultant figure is used to place rivers in one of four categories.

NASCO uses a combination of conservation limit attainment and impact assessment to classify rivers into one of seven categories.
Not at Risk: Rivers in which there are stocks of Atlantic salmon for which stock classification scores of 0 have been assigned because there are no risks to the abundance and/or diversity of the stocks.

Low Risk: Rivers in which there are stocks of Atlantic salmon for which stock classification scores of 1 have been assigned because risks to the abundance and/or diversity of the stocks are considered to be low

Moderate Risk: Rivers in which there are stocks of Atlantic salmon for which stock classification scores of 2 have been assigned because risks to the abundance and/or diversity of the stocks are considered to be moderate

High Risk: Rivers in which there are stocks of Atlantic salmon for which stock classification scores of 3 have been assigned because risks to the abundance and/or diversity of the stocks are considered to be high.

In some cases, it’s not possible to assign a stock classification score, and NASCO has created three categories for this situation:

Artificially Sustained: Rivers which are known to have had stocks of Atlantic salmon which have been lost and in which the current stocks are only sustained through hatchery stocking.

Lost: Rivers which are known to have previously had stocks of Atlantic salmon that currently have none.

Unknown: Rivers in which there are known to be stocks of Atlantic salmon but for which there is no information on which to assess their abundance.

Source: Report of the NASCO Working Group on Stock Classification 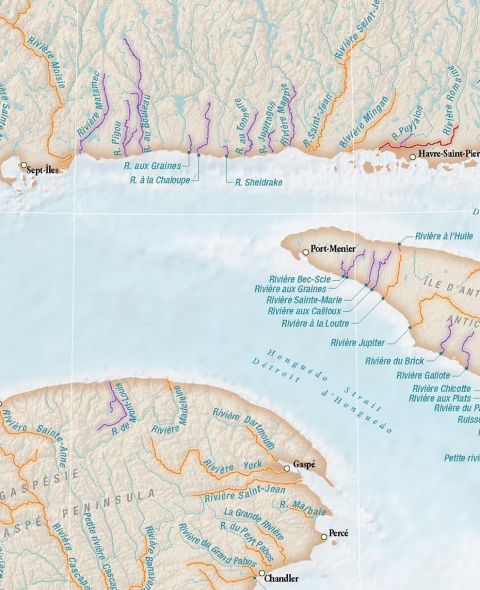 Why are so many rivers ‘UNKNOWN’?

In North America, the majority of salmon rivers are considered unknown
and even for those assigned a stock classification score, information may be out of date or approximate. In 2018 for example, salmon population assessments were conducted on 86 rivers in Eastern North America, and fewer than five hundred rivers have established conservation limits.

In Labrador for instance, one of the most important wild salmon regions in the world, there are only four assessment sites, mostly clustered in the southern portion of the territory. Canada, through it’s recently concluded Wild Atlantic Salmon Conservation Policy, has promised to increase the number of assessment sites in order to get a better understanding of salmon population health.

Will there be an online version?

Yes. As part of ASF’s new website we are currently developing an interactive online version of the map that will include enhanced features and additional information.

How can I get a copy of the map?

To request copies or offer feedback on the map please email us at savesalmon@asf.ca