Four separate research projects will be initiated. They are: 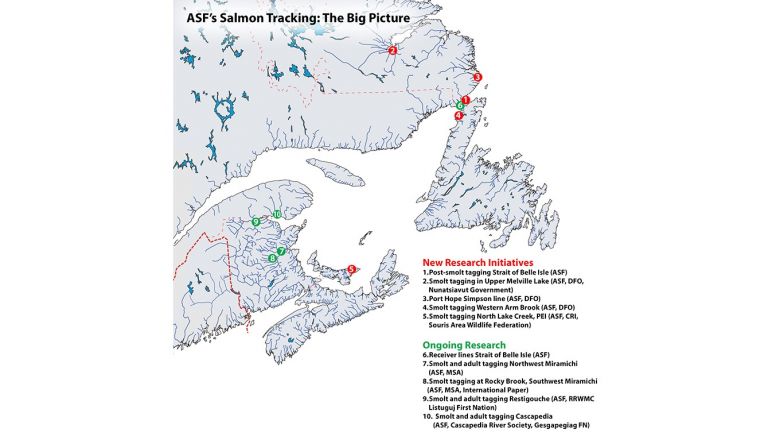 ASF, along with its partners, has significantly expanded tracking research to understand the sources of mortality of wild Atlantic salmon at sea. To view a high resolution of this map, scroll to bottom of this page and download.
These new projects will enhance knowledge of salmon migration patterns and help identify areas of marine mortality, considered to be the greatest threat to the species today.

“Parts of Newfoundland and Labrador have experienced huge drops in salmon returns recently,” said ASF President Bill Taylor. “As a result, everyone has agreed that more research is needed to understand exactly what’s happening and identify solutions”

At Lake Melville and Western Arm Brook, juvenile Atlantic heading downstream for their first ocean migration will be captured and a small sonic transmitter will be inserted in the stomach cavity. Upon release, the smolt, generally 13-16cm in length, will pass by arrays of receivers strategically placed in the river, estuary, and along the coast. Each time a tagged smolt is detected, information is logged and later downloaded by researchers.

At the Strait of Belle Isle, ASF researchers will use a custom designed live-box trawl to capture Gulf of St. Lawrence post-smolt, juveniles that have nearly doubled in size since leaving their home river. The Strait is currently the furthest extent of tracking capability for fish tagged in ASF’s long-term Gulf study rivers. Capturing and tagging post-smolt at this point in the salmon migration will allow scientists to follow movements further than ever into the Labrador Sea.

At Port Hope Simpson, Labrador, ASF and DFO will extend an existing receiver array that was installed in 2017. The line currently stretches 16 kilometres from the shore. Additional recievers added on will extend its reach to 30 kilometres. The line will detect the positions of acoustic tagged salmon originating from the Lake Melville and Western Arm Brook rivers, as well as post-smolt captured at the Strait of Belle Isle.

ASF’s work is partly funded and guided by the Atlantic Salmon Research Joint Venture. Established in 2016 and led by DFO, the Joint Venture includes indigenous research departments, provincial governments, universities, and U.S. agencies. The Joint Venture is a unifying approach to wise-use and conservation that has been applied successfully to migratory birds and other species throughout North America.

“While we continue with our three long-term tracking rivers in New Brunswick and Quebec, the expansion into Newfoundland and Labrador is a big step,” said ASF Vice President of Research Jonathan Carr. “It will bring us one step closer to a complete map of migration, a key step in addressing the threats wild salmon face throughout the North Atlantic.”

The Atlantic Salmon Federation was formed in 1948 to conserve, protect, and restore wild Atlantic salmon. To learn more visit our website: www.asf.ca