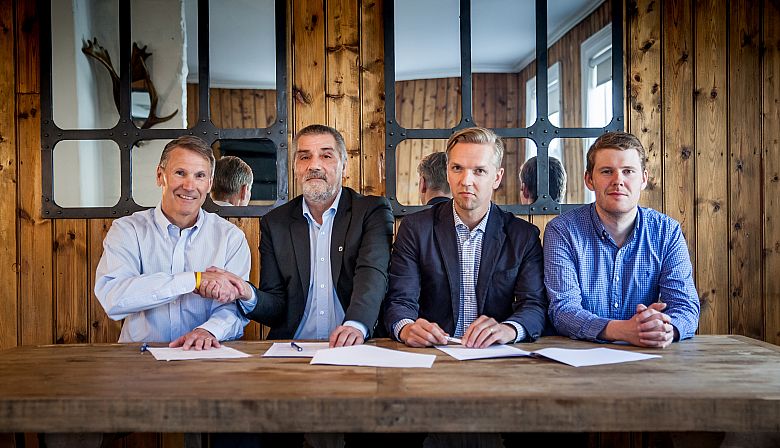 FREDERICTON – The Atlantic Salmon Federation (ASF) and the North Atlantic Salmon Fund (NASF) have signed new agreements with commercial fishermen in Greenland and the Faroe Islands that will protect thousands of adult wild Atlantic salmon from commercial nets and longlines, allowing them to return to North American and European rivers.

The new Greenland Salmon Conservation Agreement will be for a period of 12-years (2018-2029). Representatives of ASF, NASF, and the Association of Fishers and Hunters in Greenland (KNAPK) finalized the agreement on May 24th in Reykjavik, Iceland, after more than 12-months of negotiations. The Faroe Island agreement between ASF, NASF, and the Faroese Salmon Fishing Vessel Association (Laksaskip) was signed in Reykjavik on May 22nd, continuing a decades-long suspension of commercial salmon fishing dating back to 1991.

The coastal waters of Greenland and the Faroe Islands are critical ocean feeding grounds for large wild Atlantic salmon from hundreds of rivers in North America and Europe. Commercial catches in these areas are known as “mixed-stock” fisheries because salmon are captured from relatively healthy populations as well as endangered ones. This impacts vulnerable rivers like the Penobscot River in the US and the St. John River in Canada, as well as iconic rivers with reduced counts, such as the Tweed in Scotland, Iceland’s Bix Laxa, and the Alta in Norway.

“Significantly reducing the harvest of wild Atlantic salmon on their ocean feeding grounds is meaningful and decisive, not only for salmon conservation, but also for global biodiversity and the health of our rivers and oceans,” said ASF President Bill Taylor.

‘“The best way to save North Atlantic salmon is to reduce the number killed," stated NASF US Chairman Chad Pike. “The unique ocean environment surrounding Greenland and the Faroe Islands is where large, mature fish from over 2,000 rivers throughout the North Atlantic are known to spend their winters feeding. These conservation agreements create sanctuaries for wild salmon at these critical habitats, which is a historic win for salmon conservation.”

Under the terms of the agreement, the Greenland and Faroese delegations to the North Atlantic Salmon Conservation Organization (NASCO) will declare zero commercial quotas at next month’s international summit in Portland Maine. As a result, mature salmon that would otherwise be removed by commercial nets will begin returning to their home rivers in the spring of 2019.

In exchange for no commercial salmon fishing in Greenland, ASF and NASF will financially support alternative economic development, scientific research, and education initiatives focused on marine conservation. A subsistence harvest by licensed recreational fishermen for personal and family consumption will continue.

In the Faroe Islands, a historic agreement has been in place since 1991 and its salmon fishery has been closed since that time. Orri Vigfusson, founder of the NASF, negotiated the transaction with the forward-thinking Faroese government, who were pioneers in marine conservation, and have recently emerged as leaders in sustainable aquaculture regulation.

Under previous ASF-NASF-KNAPK Greenland Conservation Agreements, scientific and regulatory authorities reported increases in the number of large salmon returning to North American and European rivers. In this case, a 12-year commercial fishing hiatus will provide relief for two entire generations of wild Atlantic salmon and population benefits are expected to be significant.

All money required to support these agreements is raised privately from donors and supporters of ASF and NASF.

The North Atlantic Salmon Fund is a U.S. non-profit corporation founded in 1996 with affiliates in Iceland, Scandinavia, and western Europe.

A graph showing the decline in the number of large Atlantic salmon since 1986 shows that numbers remain below the Conservation Limit. The new 12-year agreement will help lift these numbers toward healthy populations. Numbers from the International Committee for Exploration of the Sea, the international organization that provides advice on the status of wild Atlantic salmon. Download