ST. ANDREWS – Fewer than 18 tonnes of wild Atlantic salmon were harvested at Greenland this year according to the Greenland Fishery License Control Authority (GFLK). The amount is equal to approximately 5,270 adult fish. It is the lowest catch on record since 2005, when an earlier ASF sponsored conservation agreement was in place.

The results indicate a successful first year for the new 12-year salmon conservation agreement that was recently signed by Kalaallit Nunaanni Aalisartut Piniartullu Kattuffiat (KNAPK), which is the union representing Greenland commercial fishermen, ASF, and the North Atlantic Salmon Fund (NASF). The agreement encourages fishermen to limit their take of wild Atlantic salmon in exchange for assistance developing alternate sources of income and support for marine research and conservation projects.

“This is great news for wild Atlantic salmon and full credit goes to our Greenlandic partners, especially KNAPK, who showed openness and integrity in the spirit of the agreement,” said ASF President Bill Taylor.

Wild Atlantic salmon from more than 2,000 rivers in North America and Europe congregate off the coast of West Greenland to feed and grow. Some spend up to three years in the area before returning to home rivers to spawn. Population analysis shows that on average 75 per cent of salmon taken at Greenland are of North American origin.

Because many wild Atlantic salmon populations are critically endangered, the mixed stock fishery at Greenland has been continuously advised against by the international scientific body ICES, and by national governments whose salmon migrate to Greenland such as Canada, the United States, and the European Union.

The 2018 harvest was reported at 17.79 tonnes by GFLK, a figure that includes landings from recreational and professional fishermen. The KNPAK-ASF-NASF conservation agreement sets a total harvest level of 20 tonnes for all fishermen. In the most recent five years leading up 2018, reported Greenland catches fluctuated between a high of 58 tonnes and a low of 27 tonnes.

In addition to the reduced catch at Greenland, the KNAPK-ASF-NASF agreement led to the adoption of important new management measures including mandatory licensing and reporting for all salmon fishermen.

“The large, mature Atlantic salmon that were saved as a result of the first year of our agreement now have the chance to return home where they will make an important contribution to the next generation,” said Taylor. “We believe over the next 12-years this agreement will have a measurable, positive effect on wild Atlantic salmon populations throughout North America.”

Thanks to the agreement, Greenland salmon fishermen have received support for the development of alternative sustainable fisheries, and assistance was provided to launch a multi-year research program using satellite tags to track adult salmon as they leave Greenland and return to North American rivers.

The harvest total provided by GFLK is preliminary. Final estimates will be determined by the International Council for the Exploration of the Sea (ICES) and are usually released in May. 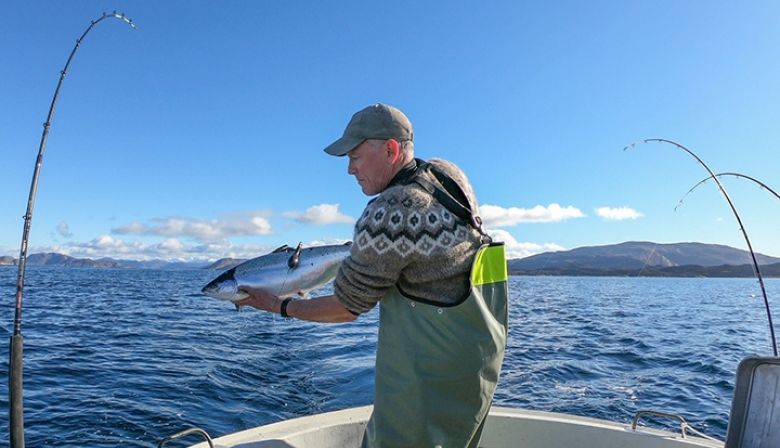 Jonathan Carr prepares to release an Atlantic salmon on which a satellite "pop-off" transmitter has been attached. He is doing so in the waters off Qaqortoq in southwest Greenland.