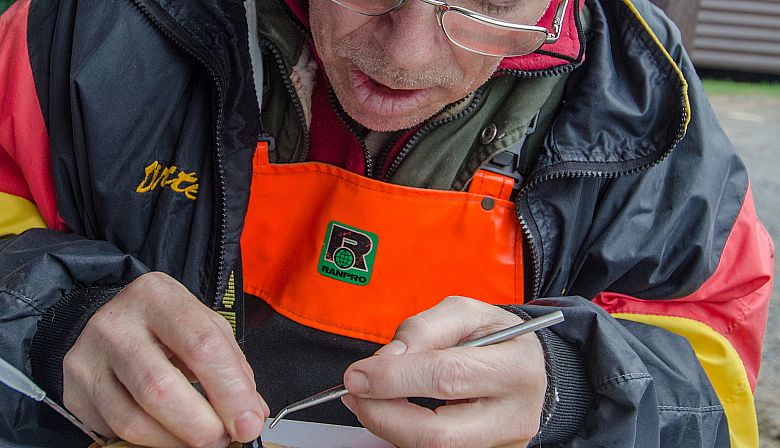 ASF's Stephen Tinker surgically implants a sonic transmitter into a smolt at Rocky Brook on the Southwest Miramichi. The smolt will continue its migration down to the estuary, and out to sea on its migration to ocean feeding grounds. Tom Moffatt/ASF
FOR IMMEDIATE RELEASE
Thurs. Dec. 13, 2018

ST. ANDREWS – Scientists from the Atlantic Salmon Federation (ASF) tracked more than 2,800 juvenile wild Atlantic salmon making their first ocean migration in the world’s longest, continuous study focused on the species. A paper based on this research was recently published in the ICES Journal of Marine Science. It details changing survival rates over time for some populations while others remained stable.

“This data set, collected over a decade and a half, is unique in the Atlantic salmon world,” said ASF vice president of research Jonathan Carr. “Too often research projects last just a few years. In this case we were able to accurately describe major trends occurring over three generations of Atlantic salmon.”

The research was funded and carried out by ASF and data was analyzed in partnership with Fisheries and Oceans Canada (DFO) and the Ocean Tracking Network. The study looked at Atlantic salmon populations in four rivers that empty into the Gulf of St. Lawrence: the Southwest Miramichi, Northwest Miramichi, Restigouche, and Cascapedia.

Juvenile Atlantic salmon, known as smolt, were collected each spring as they journeyed downriver. The fish were tagged with small acoustic transmitters and released. Migration speed and survival rates were monitored as the smolt passed lines of receivers strategically placed in each river, estuary, and across the Strait of Belle Isle which lies more than 800 kilometers from the release sites. The results indicate survival depends on smolt size, the distance a smolt must travel, and conditions encountered, including the presence of predators.

“This long-term research and collaboration is exactly what’s needed to identify the locations and timing of mortality events for Atlantic salmon at sea,” said Gérald Chaput, biologist at DFO Gulf Region and co-author of the paper. “The Atlantic Salmon Federation and collaborators have made an exceptional contribution to incremental scientific knowledge and the study highlights the challenges of conducting long-term scientific research with wild fish.”

Important differences in the survival of tagged smolt emerged over time among the four study rivers. For smolt tagged in the Restigouche and Cascapedia, survival through their shared estuary, Chaleur Bay, fluctuated from year-to-year, but remained relatively high (67% to 95%), over the 14-year study period.

Smolt leaving the Southwest and Northwest Miramichi rivers, and passing through Miramichi Bay, had similar survival rates to the Chaleur Bay Rivers in the initial study period, but beginning in 2010 a pronounced downward trend began, with survival rates fluctuating between 28 and 82 per cent. Once smolt reached the Gulf of St. Lawrence, survival rates levelled out for all populations and were generally favourable at around 60 per cent or better.

“On the Miramichi, the rise of the striped bass population coincides with declining smolt survival, backing up our earlier studies that found significant numbers of smolt are being consumed by stripers,” said Carr. “The spawning population of striped bass in the Miramichi increased from about 15,000 near the beginning of our study to approximately 300,000 fish by 2016.”

“However, this is not the only thing that should be considered as we try to understand why there are fewer Atlantic salmon returning to our rivers now than two decades ago,” cautioned Chaput. Other factors affecting smolt survival estimates may include altered water chemistry in the Northwest Miramichi watershed and changing experimental conditions.

Notwithstanding predation in freshwater, the study confirms most mortality occurs in the first few days or weeks after smolt leave freshwater and enter the nearshore coastal environment. Survival improves as the fish grow and move offshore. However, with only one to four per cent of all smolt successfully returning as adults, significant mortality also occurs beyond the Strait of Belle Isle.

ASF’s tracking work continues in the four rivers examined in this study. In 2018, thanks to partnerships with DFO, the U.S. National Oceanic and Atmospheric Administration, and others, additional juvenile and adult Atlantic salmon tagging sites were established in Newfoundland and Labrador and at Greenland, in a concerted effort to determine the cause of the high mortality beyond the Strait of Belle Isle.

ASF wishes to thank the following organizations and individuals for their generous financial support and logistical contributions to salmon research:

Established in 1948, the Atlantic Salmon Federation is dedicated to the conservation and protection of wild Atlantic salmon.