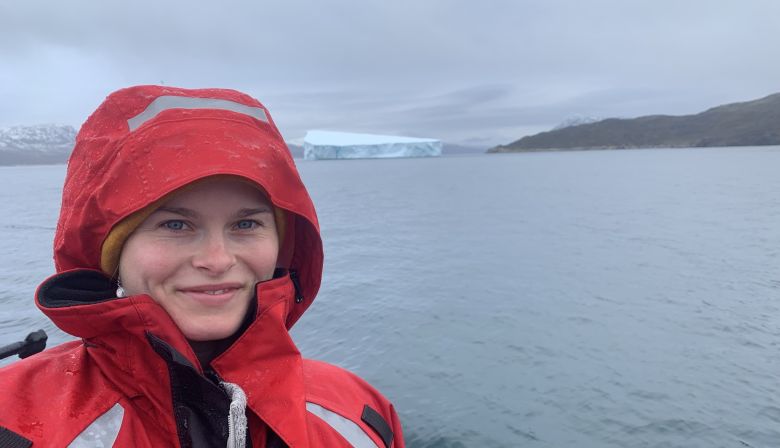 ASF biologist Heather Perry in west Greenland where more than 200-adult salmon were tagged this fall. Learn more below. 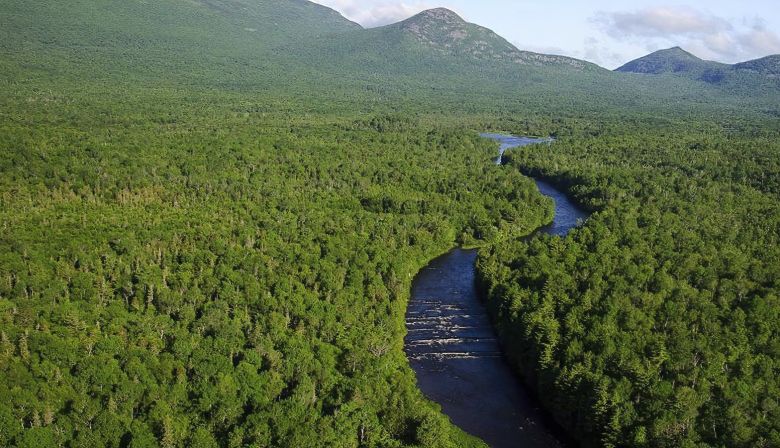 The East Branch of the Penobscot River flows through the Maine Woods, where ASF and partners are set to reopen hundreds of miles of high-quality habitat to migratory fish. Marc Picard Photography

It’s the largest single grant or donation in ASF history - $7.5 million from NOAA Fisheries for habitat work in the headwaters and tributaries of the Penobscot River in Maine. The work will take place over three years and result in nearly 500 kilometres (300 miles) of stream habitat and 10,000 acres of lakes and ponds being reconnected to the sea.

We will include partners like the Nature Conservancy in Maine, the Penobscot Nation, Appalachian Mountain Club, and state and federal agencies. Our $7.5 million is part of a $24 million new investment in the watershed, building on the tremendous success of the earlier Penobscot River Restoration Project which has led to a massive recovery of sea-run fish populations. 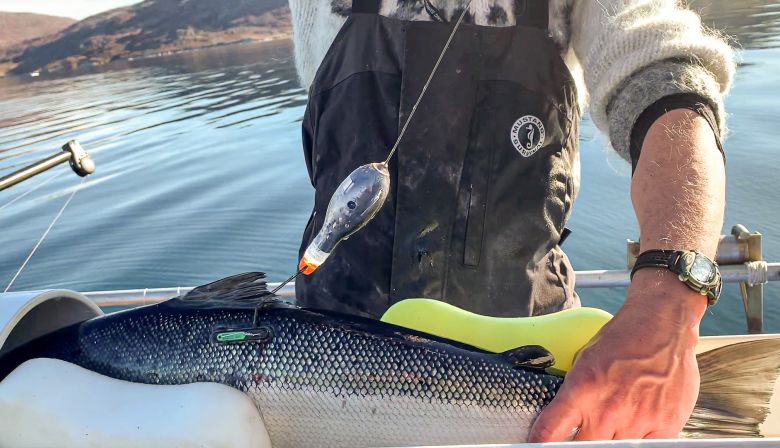 ASF vice president of research and environment, Jonathan Carr, secures a pop-off satellite tag to an adult salmon at west Greenland. Heather Perry/ASF
ASF's flagship research program achieved a breakthrough this year in Greenland, where salmon from more than 2,000 rivers in North America and Europe migrate to feed and grow.

The ASF crew, working with local fishermen, KNAPK members, and scientists from Fisheries and Oceans Canada and the National Oceanic and Atmospheric Association, caught and tagged 215 adult salmon with satellite and acoustic tags. It was the fourth of this current five year program, and by far the most successful. 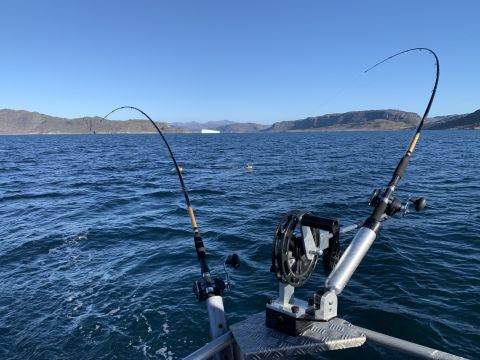 The satellite tags are tethered to the backs of the fish and programmed to release in early May. They will float to the surface and connect with passing satellites to transmit data on depth, water temperature, and position.

The acoustic tags are implanted in the stomach of the salmon and have batteries that can last up to two years. They emit soundwaves that are detected by receivers placed along known migration routes home from Greenland. The data captured identifies the unique fish and when it passed by.

This work at Greenland compliments ASF’s long-term research on juvenile and adult salmon leaving their home rivers, detailing for the first time in history the exact route and timing of their homeward migration.

Read more about the valuable data this research is producing.

Dollar Dog makes the cut at IF4 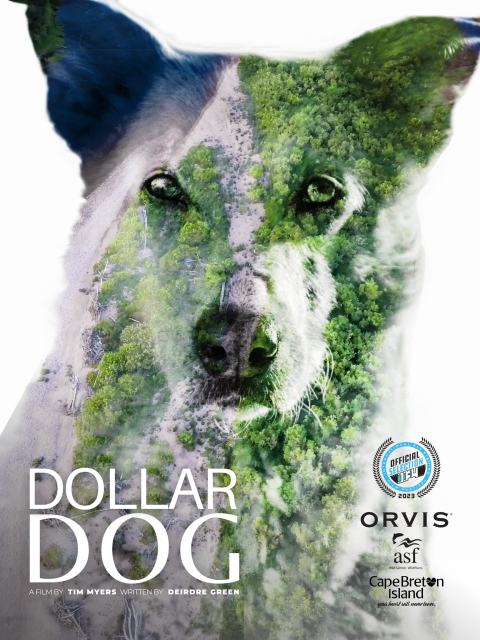 The ASF x Orvis production tells the story of Ella, a retriever-shepherd-lab mix from Doyle's Bridge, Cape Breton, who walks alone every day during fishing season to Dollar Pool on the Margaree River where she watches people fish and points to where salmon are laying.

The short documentary features legendary Margaree Guide Robert Chiasson and Ella’s family, telling the story of this remarkable pooch. It will be shown around North America – proof that not every fishing story is about fish.

The documentary was shot and edited by filmmaker Tim Myers and written by ASF's Nova Scotia program director, Dierdre Green.

And visit the IF4 website to see if there is a screening in your area.

Wild Salmon Watersheds up and running 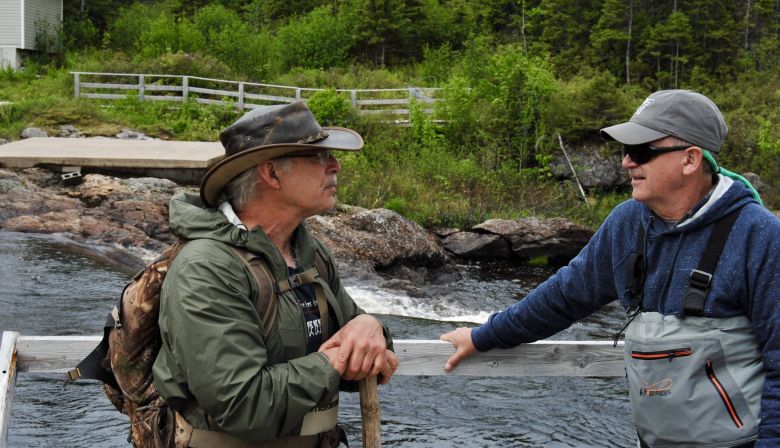 Don Ivany (right),ASF's Newfoundland and Labrador program director, speaks with Ed Stewart from the Freshwater-Alexander Bays Ecosystem Corporation on the Terra Nova River in June 2022. The Terra Nova is one of ASF's three Wild Salmon Watersheds pilots.
ASF’s new Wild Salmon Watersheds program has advanced from a concept to the pilot stage. Discussions and planning sessions are underway in three places; the Nepisiguit River in New Brunswick, the Margaree and Cheticamp rivers in Nova Scotia, and the Terra Nova River on the island of Newfoundland.

Wild Salmon Watersheds places ASF in the role of builder and facilitator. Working with local partners like the Nepisiguit Salmon Association we will help build a long-term plan for conservation action and deliver the money and expertise required to execute. As a facilitator, we will connect our partners at annual conferences to share best practices.

ASF’s Wild Salmon Watersheds program is a long-term investment in unique and relatively healthy salmon rivers. For our partners, it’s an opportunity to break out of the frustrating cycle of small grants and short-term goals. For us, it’s a chance to apply 75-years of conservation experience to create a network of wild Atlantic salmon strongholds.

To learn more about the program, and how your river could be considered, contact Kris Hunter – khunter@asf.ca 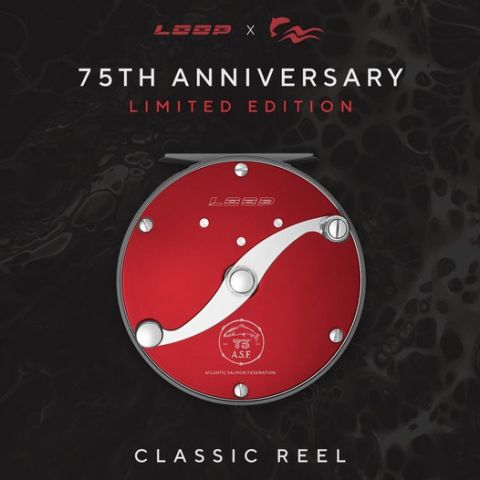 In 2023, ASF turns 75-years old and to kick off the celebration we have partnered with Goose Lane Editions in Fredericton and Loop Tackle to produce a coffee table book highlighting the best of the Atlantic Salmon Journal since 1975, and a Loop Classic real engraved with our 75th anniversary logo.

Both are now available for order.

To order one of the 100 reels available, please visit Loop Tackle’s online store. 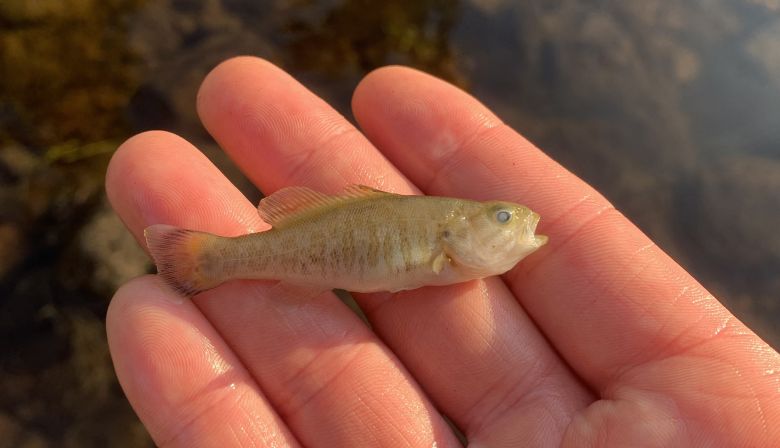 A young-of-the-year smallmouth bass recovered after a rotenone was used in 15-kilometres of the Southwest Miramichi River in September 2022. Nathan Wilbur/ASF
ASF remains committed to eradicating illegally introduced smallmouth bass from the Miramichi watershed. In September, we successfully treated Lake Brook and a portion of the SW Miramichi River to remove these invasive fish. However, we could not treat Miramichi Lake with a rotenone project as planned.

There is extensive coverage of the smallmouth story in the latest issue of the Atlantic Salmon Journal, and already we are working on finishing the job in 2023.

This November at our New York gala, supporters were asked to help cover project costs. We raised approximately $400,000 USD to support one of the largest Atlantic salmon restoration projects ever attempted for one of the most important salmon rivers in North America. Thank you! 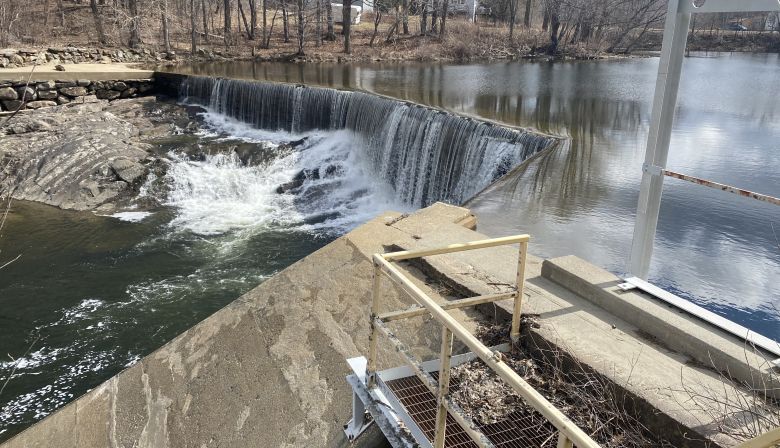 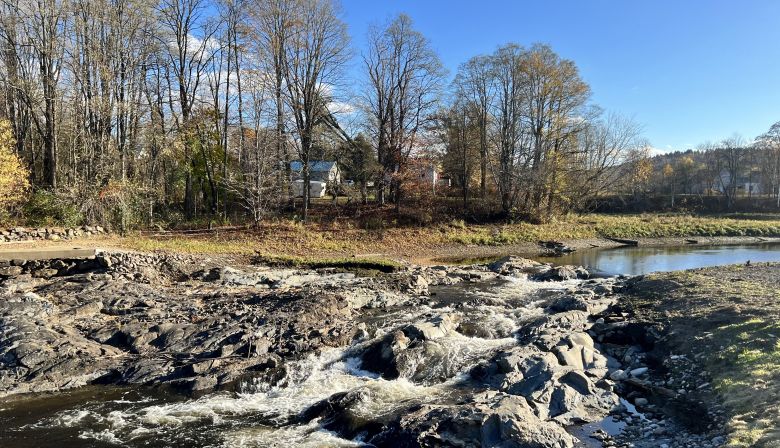 The Walton's Mill Dam site after removal. Maranda Nemeth/ASF
In August, we completed the removal of the Walton’s Mill Dam near Farmington, Maine. This $3.2 million USD project was six years in making and reconnected more than 80-kilometres (50 miles) of cold-water spawning habitat to the Sandy River, in the headwaters of the Kennebec.

The Sandy River is some of the best habitat in the United States for endangered Atlantic Salmon and attracts dozens of wild fish every year who are trapped at lower Kennebec dams and trucked to the area. Improving the Sandy River watershed is considered essential to species recovery in the U.S.
Walton’s Mill is the largest dam removal yet for ASF’s Maine Headwaters program and includes extensive improvements to a public park bordering the old reservoir. The structure had been in place for approximately 200-years. Its removal is a major achievement for John Burrows, Maranda Nemeth, and the whole ASF Maine team.

Visit our Maine Headwaters page to learn more about ASF's habitat work in the state.