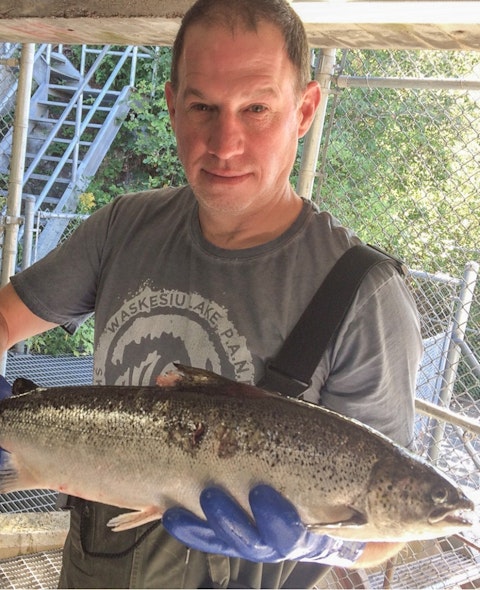 ST. ANDREWS – Atlantic Salmon Federation researchers have intercepted and removed 53 aquaculture salmon that were attempting to enter the Magaguadavic River through the fishway at St. George N.B. Although the exact origin of the lost fish has not yet been determined, the surge of escapes follows a known incident on August 20th at a Cooke Aquaculture site
(MF-0228) near Deer Island.

According to a company official, a pipe broke as fish were being transferred from a net-pen to a well-boat for sea lice treatment. It was initially estimated that 2,500 large salmon escaped, although Cooke representatives have since downgraded their estimate to 1,000.

ASF staff detected the first aquaculture salmon in the live trap at the top of the Magaguadavic River fishway on August 21st. A second was detected on August 22nd, and 12 were counted on August 30th.

As of September 8th, 53 aquaculture escapees have been collected, the most since 2013 when 91 were captured in the live trap at the top of the fish ladder. The fish are euthanized and brought to ASF headquarters in Chamcook, N.B. for sampling before being sent to Fisheries and Oceans Canada (DFO) for further analysis. Two wild origin fish were also discovered on August 13th this year at the Magaguadavic fishway. One of the wild fish was dead when ASF staff arrived. The other was passed over the trap to continue its upstream voyage. A map of salmon aquaculture sites in the Bay of Fundy shows MF-0228, where Cooke Aquaculture reported a breach of containment on August 20th, and the Magaguadavic River fishway in St. George where 53 escapees have been recovered and removed.
Typically, only a small percentage of escaped salmon enter the Magaguadavic following an breach of containment in the Bay of Fundy. For example, in 2005 when vandals cut 50,000 fish loose from a nearby Cooke site, only 30 fish matching the description of the escapees were recovered by ASF staff from the fishway.

“While we appreciate a prompt response from Cooke to our inquiries, and the fact the company consented to the release of some information by provincial officials, this news was not shared widely with the public,” said Neville Crabbe, ASF’s executive director of communications. “In general, silence and secrecy about escape events puts endangered Bay of Fundy wild Atlantic salmon at risk.”

Under New Brunswick laws, companies are only required to self-report escape events when employees believe more than 100 fish have been lost. Those reports are then treated as confidential, and only released with consent of the company. Wild Atlantic salmon are distinguished from aquaculture escapees by analyzing scale samples. Wild fish (left) have irregular growth rings created through periods of fasting and feasting. Aquaculture salmon scales (right) show a uniform growth pattern as a result of constant feeding. Photo ASF
“Knowing to be on the lookout for escapes is critically important, especially as we get closer to the fall spawning season for endangered wild salmon in the Bay of Fundy,” said Crabbe. “For example, Fisheries and Oceans Canada and Parks Canada could detect and remove escapees at monitoring facilities they operate. Others like the Hammond River Angling Association and the Nashwaak Watershed Association could also step up surveillance, but only if they’re equipped and know there’s a threat in the water.”

In April 2018, three aquaculture escapees were recovered in the Hammond River by volunteers attempting to capture wild fish for an enhancement program. The Hammond is a tributary of the Saint John, more than 100-kilometers away from the St. George fish ladder. Aquaculture salmon in the Bay of Fundy are known to be hosts for high concentrations of parasitic sea lice, and multiple viruses, including infectious salmon anemia (ISA), which can have devastating effects on wild fish. 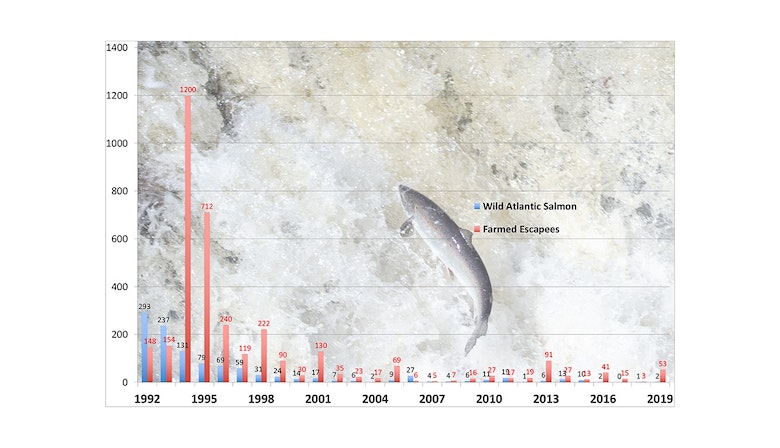 The Atlantic Salmon Federation has monitored the Magaguadavic River fishway since 1992. As the salmon aquaculture industry in the Bay of Fundy grew, wild salmon were quickly overwhelmed by industry escapees.
Spawning by aquaculture escapees and between farmed fish and wild Atlantic salmon in Bay of Fundy rivers has been documented by the Atlantic Salmon Federation and Fisheries and Oceans Canada. These events produce maladapted offspring and contribute to population collapse. As a result, DFO has declared the industry a marine threat of “high concern” to wild Atlantic salmon populations.

In early 2019, the province of New Brunswick began consultations on the development of a new provincial Aquaculture Act and regulations, a move welcomed by ASF and others. In a submission to government, ASF has requested increased transparency, extended responsibility for escaped fish, and reforms to the lease conditions and fees which currently allow companies to discharge significant fecal, chemical, and pharmaceutical waste into public waters for less than many New Brunswick homeowners pay in annual property tax.

Chart of the numbers of wild Atlantic salmon and aquaculture escapees at the Magaguadavic River fishway in southwest New Brunswick.

Map of the origin and discovery site for the aquaculture escapees recently found in the Magaguadavic River.

Scales of a wild Atlantic salmon (left) and farmed salmon escapee (right). The two are told apart by the uneven growth rings of the wild salmon and the even growth of the aquaculture salmon.