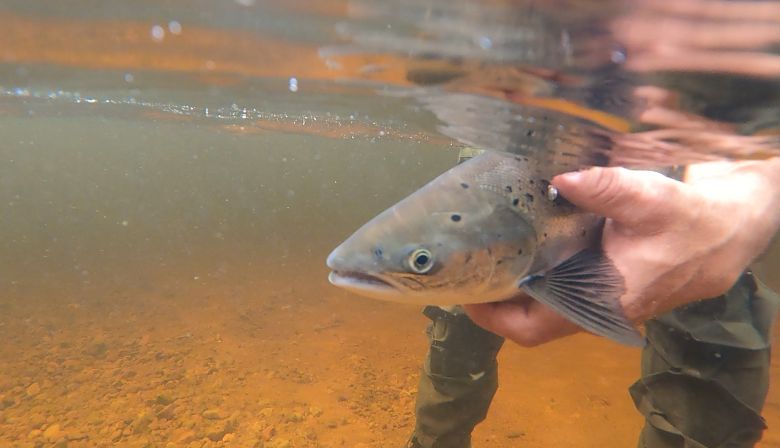 We are thrilled to see so many of you making the most of the beautiful long weekend. Photos and accounts of successful fishing adventures are flooding social media and we are receiving encouraging reports from members throughout the Atlantic provinces. 2022 is shaping up to be a record year on many rivers, and we want to take this opportunity to extend our sincere thanks for your valued contributions to our work.

Recently, we have seen an influx of families out on the water together. We recognize that the photos shared are a mere snapshot of the fun and don't reflect the hours of preparation and hard work you parents are devoting to making these memories with your youngsters. Your effort and determination to share your passion for conservation and Atlantic salmon is truly worthy of commendation. Bravo!

As a friendly reminder to all, ASF is a conservation partner of Keep Fish Wet and we want to encourage everyone to be mindful of the best practices surrounding fish handling and fish photography. By educating ourselves and helping to teach the next generation of anglers, we can all play a part in improving the outcome for each Atlantic salmon released. 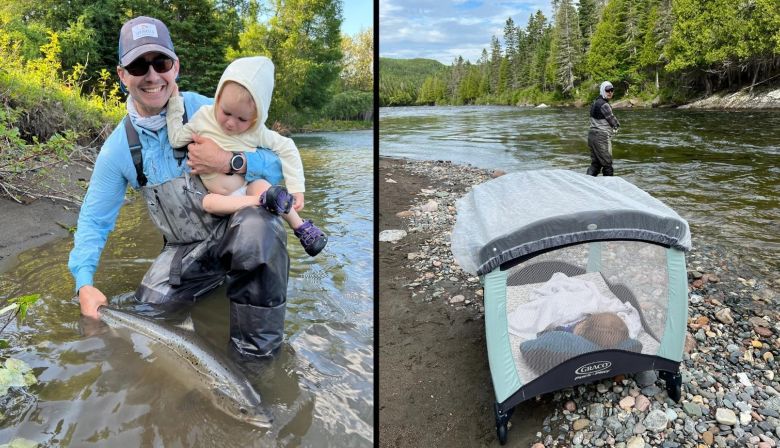 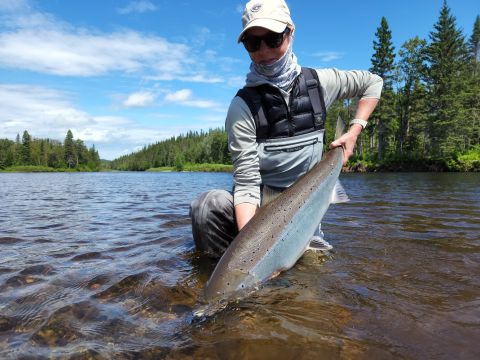 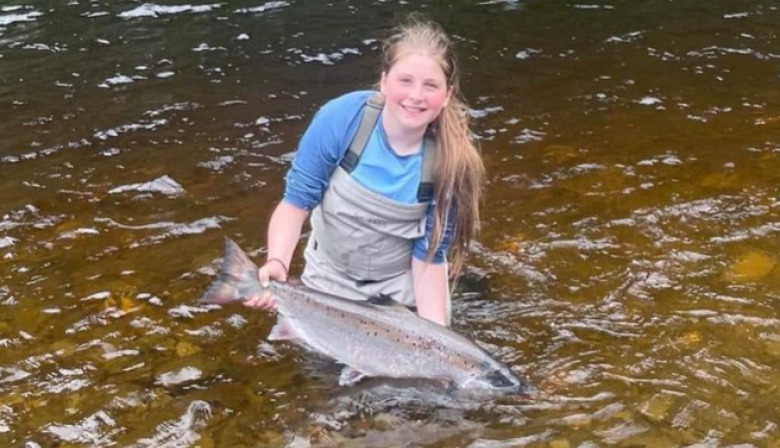 Angling success rates and fish counts to date are a harbinger of a productive spawning season this autumn. In this week’s issue, a snapshot of comparative figures from previous years to registered data to date in 2022 are presented.

River managers continue to ask anglers to report the fish they release to calculate an accurate angling success rate.

An in-river count will take place (conditions permitting) during the following week to assess if there is enough abundance to permit a harvest of salmon.

540 salmon is the number needed if a harvest can begin as of July 15th. If the number of fish needed are not in the river, the decision will be delayed to late July where 723 salmon must be counted to enable a harvest until August 31st. To register the release of a fish please visit saumongaspe.com. Comparison Table 2

There is something truly magical about the Margaree river that is hard to describe in words. We arrived Thursday evening for the long weekend and we couldn’t wait to set foot in the river come sunrise Friday.

My good friend Tyler Puddifant and I have been trying to sneak a summer trip in these last few years however, with busy schedules we had to keep postponing. I know all those with young families at home will understand how that goes.

Conditions were great — salmon were on the move and showing in both the lower and upper sections of the river. The fishing itself was a little slow but we were in great company and ran into many familiar faces. Those magical moments on this beautiful river always leave me excited to return! 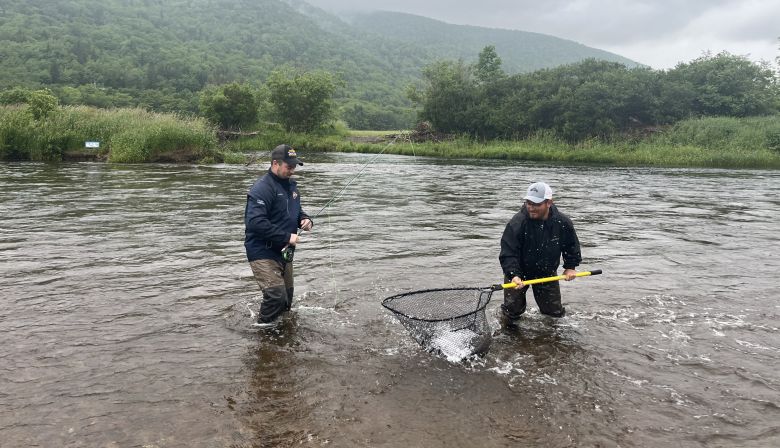 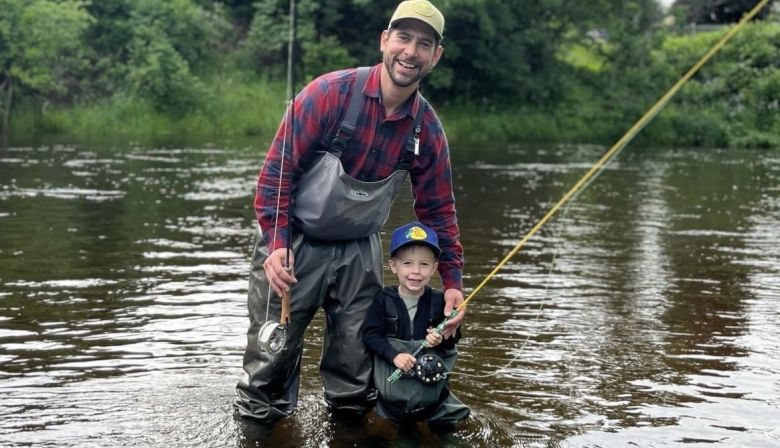 My family and I spent some time on the Margaree this past weekend and I observed that salmon were moving at the beginning of the weekend but by Sunday, water levels began to drop, and fish began settling in the pools. Fresh fish were noted throughout the entire system and I was pleased to land a grilse at Brook pool on a dry fly.

I also have been spending time fishing with my daughter, Denver. Pictured below is one of the days we spent in the Brierly Brook area near our home in Antigonish. We saw lots of brook trout and salmon parr on our travels that day and Denver had fun releasing some brook trout, our provincial fish. 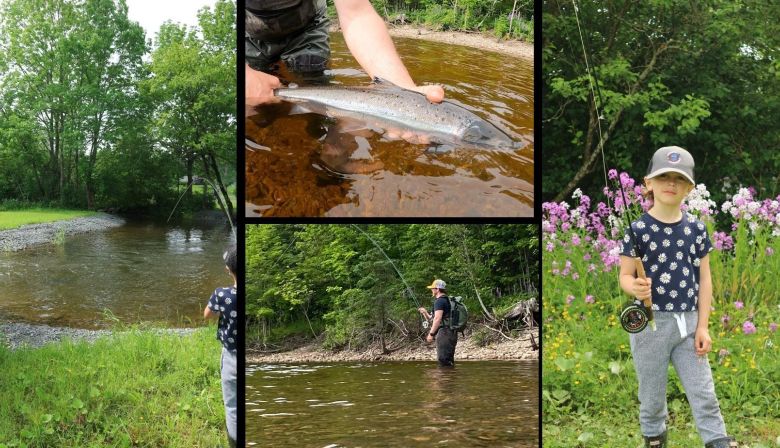 Fishing conditions are beginning to shape up quite nicely in the Bay St. George region of Newfoundland. In the early weeks of the season, there were many reports of salmon being caught on Southwest Brook, as well as a handful of the other rivers in the region. At this point in the season, salmon have entered all of these river systems and angling continues to improve. Many of these rivers have seen quite a fluctuation in water levels over the past couple of weeks, leading to some relatively slow fishing with some glimmers of excellent fishing in between.

During the last two weeks, I have spent nearly every day on the river both guiding and fishing myself, and I’ve taken note that in certain pools I’ve seen quite a few fish one day and zero fish the next day despite similar weather and water conditions. I believe that the heavy rain in the region last week allowed many fresh fish to enter these rivers, but has also allowed them to cruise through without stopping for too long in many of the pools in the lower sections of the rivers that they typically hold in.

Now that this high water has run off, the water levels in the Bay St. George river systems have been ideal for angling in the last few days and the fishing has been excellent. While it isn’t indicative of good conditions in all of the Bay St. George rivers, the “near-real time” water quality data for Harry’s River shows that the water level has stabilized and the temperature remains relatively cool.

Bay St. George is expected to see a fair amount of rain over the next couple of days which will bring the water levels back up. This should bring more fresh fish into these rivers and help keep the water temperature down. I suspect that the fishing in all of these rivers will be excellent in the days following the rain. 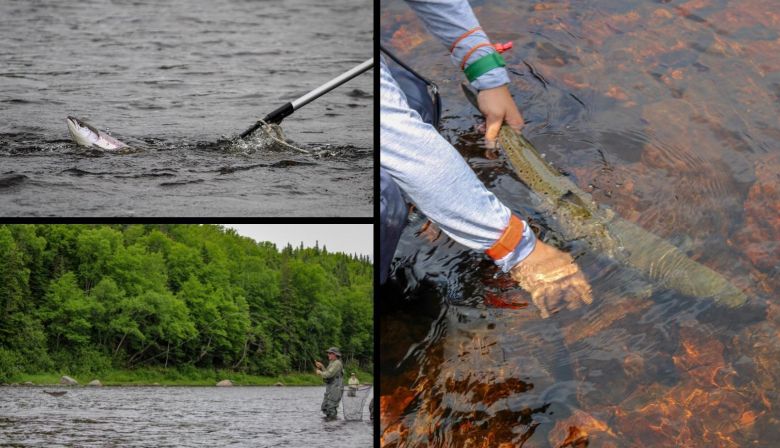 More rain overnight July 5th and into the 6th. This will bump the river up again and cool things down. Some of our anglers are now using dry fly patterns and are enjoying hookups on them. It's definitely shaping up to be a great season.
Tyler Coughlan of Country Haven Lodge shares:

We are happy to report excellent numbers of fish being observed throughout the system with new salmon arriving daily. The past week has been a little tougher with respect to hooking fish. Many are chasing hooks and rolling on the fly but the ones that are committing are getting off with a long line release. There also seems to be a great number of parr in the river system. In fact, a great deal more than in recent years and many in the lower stretch of the Miramichi. This all bodes well for future seasons and salmon runs.

As always, we will provide a weekly river report on our website and encourage anyone interested to take a moment to read and share:
Country Haven River Report - July 2nd, 2022 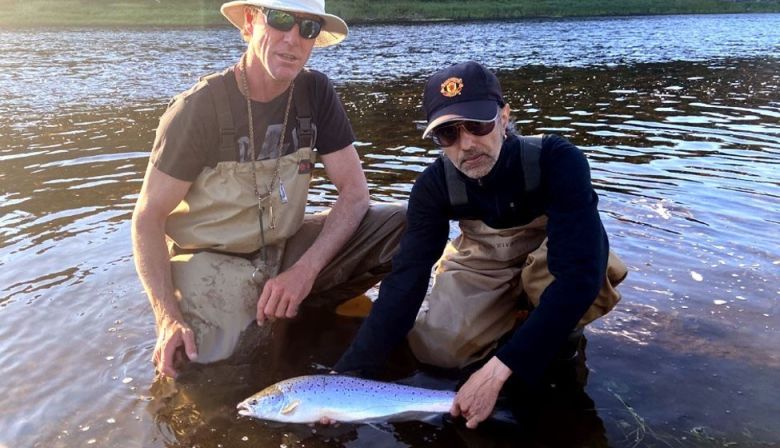 Atlantic salmon are still coming in in good numbers. We have been seeing about 20 per day. For the latest numbers, please see the attached report:

Atlantic salmon captures have been slowing down this past week at the Lockwood fish lift and mostly consisting of grilse. Seven new Atlantic salmon were captured since the last report. Most of the scales have been read to date and the run is 54% wild, 46% hatchery (smolt stocked). Of the naturally reared salmon, 3% are grilse (1 sea-winter) and 97% are 2 sea-winter salmon. Of the hatchery origin fish, 76% are grilse (1 sea-winter) and 24% are 2 sea-winters.

This year, returning multi sea-winter (MSW) adult salmon will be tagged with acoustic tags. The goal of this tagging study is to understand movement, ecology and habitat use by natural-origin and hatchery salmon, thermal refuge use, and identification of spawning habitat. So far 17 returning MSW salmon have been tagged and released in the Sandy River.

Here are the Atlantic salmon numbers from the Brunswick Fishway for the week of Monday 6/20/22 through Sunday 6/26/22:

Atlantic Salmon: A week’s total of 5 salmon passed upstream which brings the season total to 14. Actual total of salmon captured this week was 6 however one was a recapture so it was not counted as a new fish. The recapture occurred on 6/23/22. and was one of 4 grilse captured that day. All of the salmon that passed this past week at Brunswick fish list (BFW) have been of 1 sea-winter (1SW) size. As a matter of fact, only the first 6 salmon at BFW this year were of multi-sea winter size (captured between 5/31/22-6/5/22), all others have been 1SW size.

DMR's Colby Bruchs shared that the total Atlantic salmon count on the Narraguagus through to July 5th is now at 18 fish.