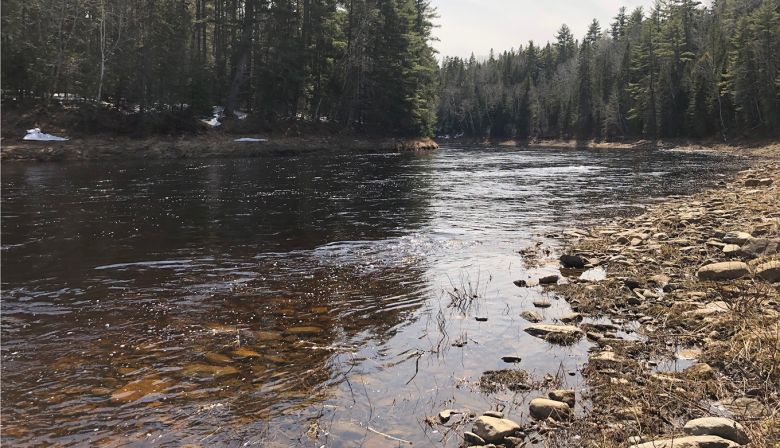 “Please go outside,” said Dr. Bonnie Henry, British Columbia’s provincial health officer, earlier this week, noting a study of 318 clusters of the novel coronavirus where only one spread amongst people outdoors.

“As an avid angler, I know there’s nothing better for the heart and soul than a little fishing,” said Maine Governor Janet Mills in March after the state opened the recreational fishing season early and waived the need for licenses.

"In a nutshell, it's starting to take advantage of what we love here in New Brunswick about our wide open spaces," said New Brunswick Premier Blaine Higgs last week, announcing a gradual easing of COVID-19 related restrictions, including opening up provincial waterways to recreational angling. 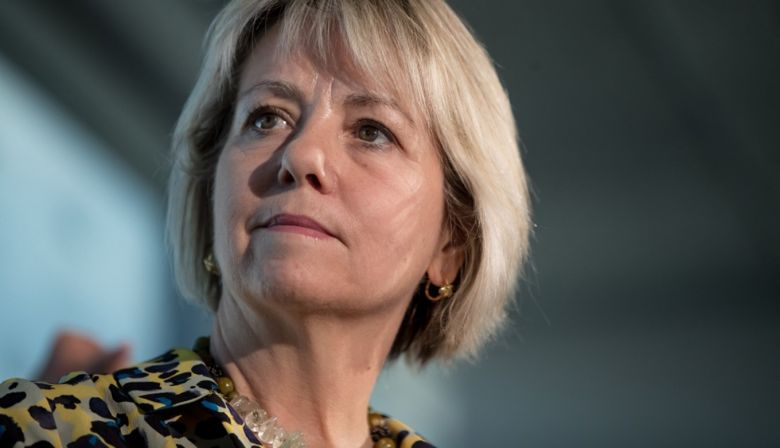 Dr. Bonnie Henry, B.C.'s Provincial Health Officer, says "Go outside".
As people clamour for normalcy after a month and a half of social distancing, leaders across North America are recognizing the importance, and low public health risk of recreational angling. But being outdoors doesn't mean we can let up on the practices that have saved us from the worst of the pandemic, and crossing borders is still not permitted. Let's remember that recreational angling is a privilege, not a right, and with privilege comes responsibility. 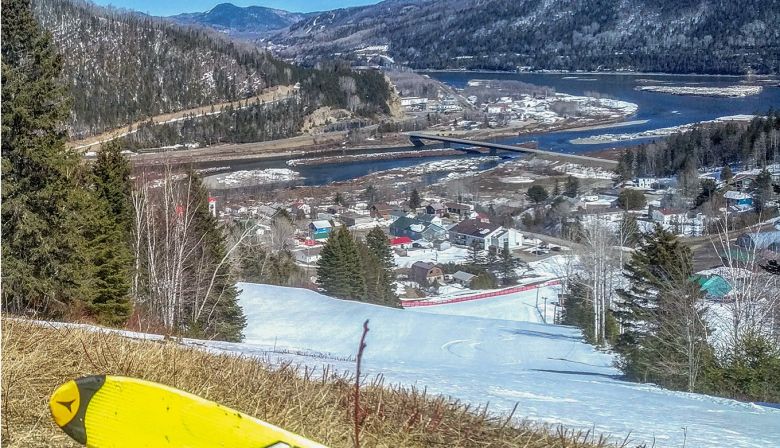 The view April 26th looking down from the ski hill in Matapedia, Quebec at the junction of the Restigouche and Matapedia rivers. Photo David LeBlanc/RWMC
On Tuesday, April 28th, ASF hosted a webinar on smallmouth bass eradication on the Miramichi. You can view the webinar and download the presentations here

“The Restigouche and Matapedia are running very clear for this time of year. There is still a lot of snow melt yet. There are some salmon around, but nobody is fishing.

“Covid-19 has affected the government activity. For example, as of Wednesday, our regular contracts with New Brunswick are still not signed. We are still planning to undertake much of our habitat restoration and fish passage work, which doesn’t start until summer.

“But all smoltwheel collections of data are cancelled for the year. And for fishing camps, it is still not clear who is going to operate this year, and who will not.

“One difficult situation is that the bridges are blocked off, affecting our access to both sides of the Restigouche at this time. Just one more result of closing the border between New Brunswick and Quebec. It makes things much more difficult for camp managers and their staff as well.” 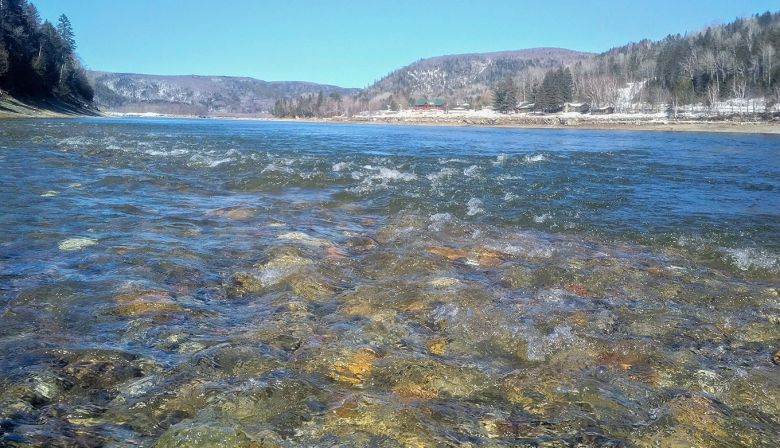 Water levels in the Restigouche River are low for this time of year, but there is a significant snowpack still to melt in the forests.Photo David LeBlanc/RWMC 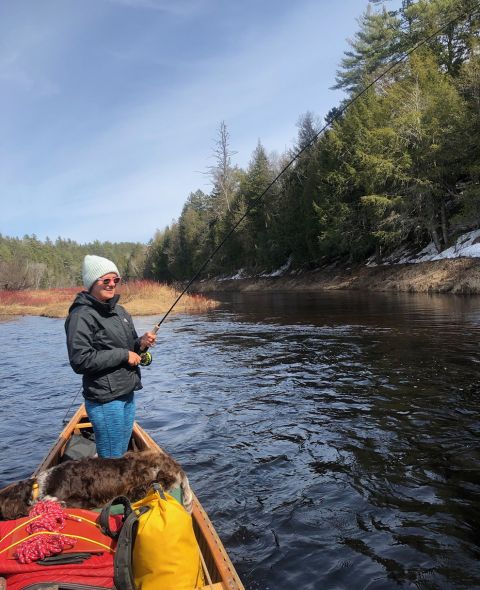 "New Brunswick’s fishing season was initially delayed from April 15 to at least May 1. However, with the improving conditions in New Brunswick, the Premier pleasantly surprised anglers last Friday with an announcement that the season would open immediately. DFO issued the variation order and the season officially kicked off on Saturday morning at 6 am, April 25. There were a lot of happy people on the water over the weekend.

"We are hearing generally good reports from the Miramichi with some anglers hooking in the double digits over the course of a few hours fishing on the weekend. The water is clear, high, and cold and in good shape for spring fishing.

"DFO announced the regulations for Atlantic salmon and striped bass recreational angling for Gulf region rivers (i.e., Miramichi, Restigouche, etc.) on Friday, April 24. Regulations are the same as last year for both species. Atlantic salmon is live release for the season. Striped bass has a daily bag limit of 3/day, retention slot size of 50-65 cm, spawning area closure during peak spawning on the NW Miramichi, and season from April 25 to September 15, except the Miramichi River system, where it runs from May 1 to October 15." 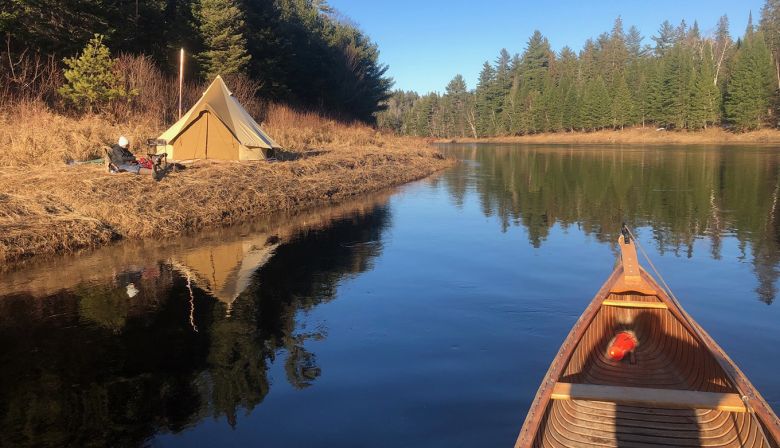 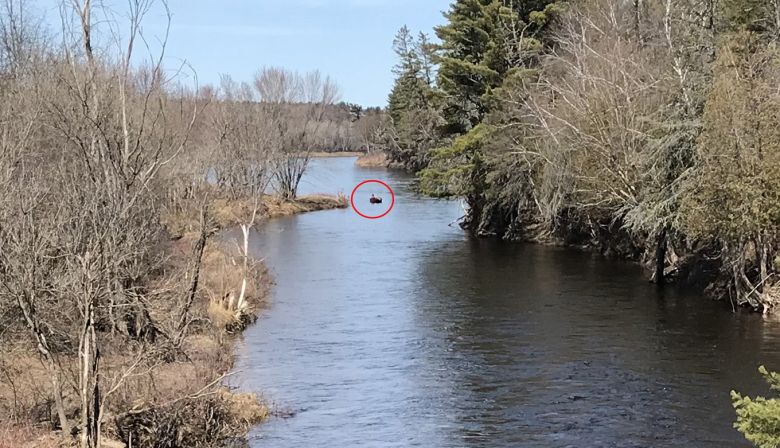 Looking downriver from the municipal park in Blackville where the Bartholomew River meets the Southwest Miramichi. Jamie MacDonald and his daughter are angling salmon in the distance, safely separated from the photographer. Photo Brock Curtis
Brock Curtis of Curtis Miramichi Outfitters and the Miramichi Fly Fishing Schools says:

"The angling season finally opened this past Saturday and the locals along the river couldn't have been happier. For the first day of the season the angling was great here in the Blackville area.

"Everyone we talked to was catching salmon and some boats reported 20 plus salmon brought in and released. Most felt that angling may not be good as the ice has been out for weeks and the rivers are getting quite low for this time of year.

"The absence of salmon sportsman from the United States and around the world is quite obvious. Normally we would see upwards of 20 boats on the shore in front of some lodges ready to take sportsman out on the river.

"I talked to one lodge owner today and we both commented on how we miss the friendships we have developed over the years with these sportsman. For those who would normally be stopping by my tackle shop while here on the Miramichi we hope you are well and send greetings from the Miramichi.

"The smelt run has made it to the Quarryville area just a few miles downriver from Blackville. We heard of the odd trout being caught but nothing of any size yet. Rain is in the forecast and we need it to maintain river levels. Unless we get a raise in the river levels we will not be able to motor very far upriver above the Blackville area. This restricts fishing to the lower section of the river.

"This is definitely a season we will not forget. Even though restrictions are being lifted for angling the season is certainly not normal. Restrictions still apply and we need to be mindful and careful. Enjoy the fishing." 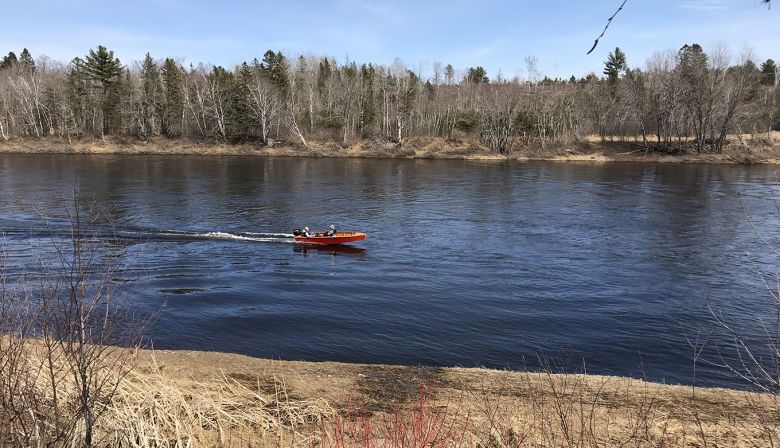 Bronson Campbell motoring up the Southwest Miramichi near the community of Blackville. Photo Brock Curtis

The provincial government has released its roadmap for a return to normal activities in the province.  coming out of the lockdown. As it stands, the province is at Level 5, which does not permit recreational angling. If the current positive trajectory continues, on May 11 the province may move to Level 4, which would allow angling and hunting to proceed in time for the planned June 1 opening of the recreational angling season.

Like other provinces, it appears residents will be able to get out on the water this season, but unless inter-provincial travel restrictions are eased, and the U.S. border reopened, people from away may be prevented from making trips.

Fisheries and Oceans Canada scientists have released their assessment of 2019 salmon returns to Newfoundland and Labrador. Here's what they found:
Based on the numbers from 2019, a cautious approach is warranted for the 2020 season. As part of the annual salmon advisory process overseen by DFO, ASF recommended recreational salmon anglers receive a single tag to start the season with the possibility for the issuance of a second tag following a positive mid-season review. The final decision lies with DFO and is usually made days before the season starts.
To view the full report provided by DFO science in Newfoundland and Labrador, download the provisional stock assessment powerpoint below. 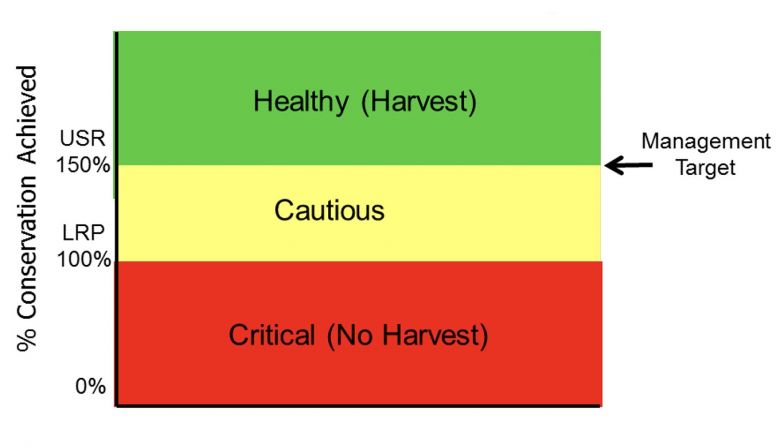 The Conne River, in the heart of Newfoundland and Labradors's salmon aquaculture industry continues to suffer with just a few hundred adult salmon returning in recent years, down from a high point in 1987 when returns of 10,000 grilse and 500 late salmon were estimated.

At sea survival was generally low, but one river stood out – Rocky River had a 15.5% marine survival for the year class returning 2019.

“The MFFP conservation officers are on duty. As far as auxiliary conservation officers go, everything hinges on next Monday’s announcements. That's when the province is due to update the public on plans for the recreational angling season. The individual river managers and ZECs have been doing their due diligence and are preparing to request money from the government to help with any shortfall due to Covid-19.”

"P.E.I. is opening their fishery as of today. The following was posted on P.E.I. Fish and Wildlife Facebook and Website yesterday:

'The 2020 Recreational Fishing season will begin on Friday, May 1st. All angling regulations as well as those that pertain to COVID 19 will apply. Starting tomorrow afternoon, we will begin to deliver licences to vendor locations across the Island. The E-Licence service is also available.'

"Today at 3 pm Dr. Strang announced that fishing season is open. Social distancing must be maintained. Fishing from shore and from a boat are both legal but people in a boat should be from the same family unit."

For Atlantic salmon recreational angling, this confirms that season will begin on June 1. Given the context of the Covid-19 year, there is great excitement around this opening.

Specifics of the wider announcement by the Premier on Friday afternoon:

"The Milford fishlift was started up on the morning of April 22nd. River temp is 7C (45F), and flows are high. Thus far we have passed 1 alewife and 2 white suckers." 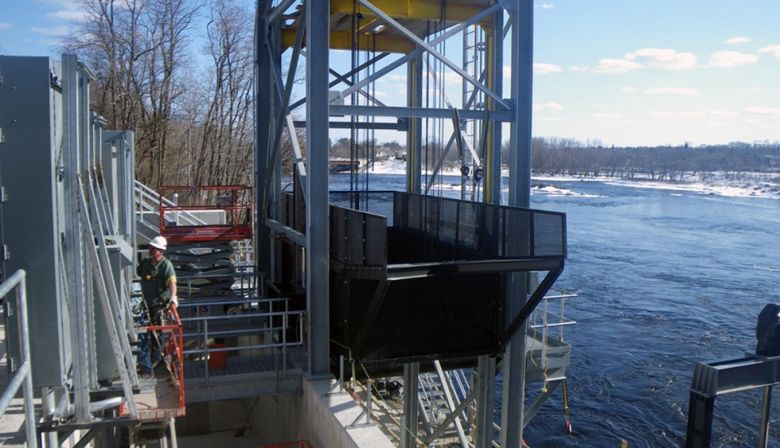 The fish lift at the Milford Dam on the Penobscot River in Maine. Most Atlantic Salmon entering the Penobscot are passed through the lift, with some removed for captive rearing at the nearby Craig Brook National Fish Hatchery. 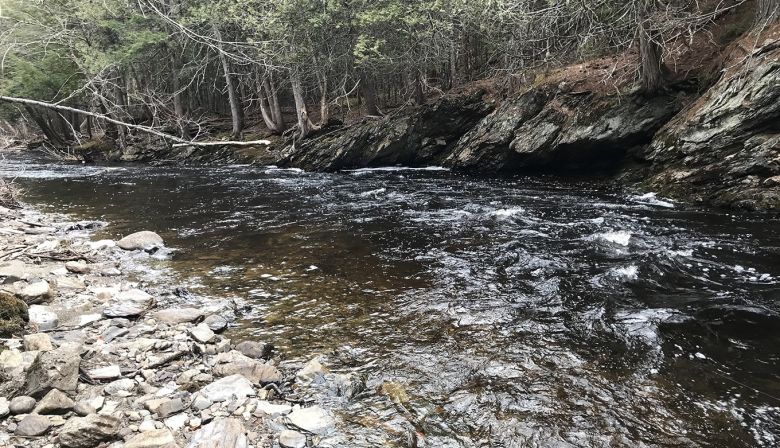 The Dennis Stream in Southwest New Brunswick just blown the Maxwell Crossing covered bridge. Photo Robert Otto/ASF
The Dennis Stream empties into the estuary of the St. Croix River below the Milltown Dam in the community of St. Stephen, N.B. Recent surveys have shown that Atlantic salmon from the endangered outer Bay of Fundy population complex continue to enter the stream, but little is know about their abundance or distribution. Unobstructed by major dams, unlike the larger St. Croix River, the Dennis Stream may provide a natural genetic reservoir for the restoration of the St. Croix after the planned removal of the Milltown Dam.