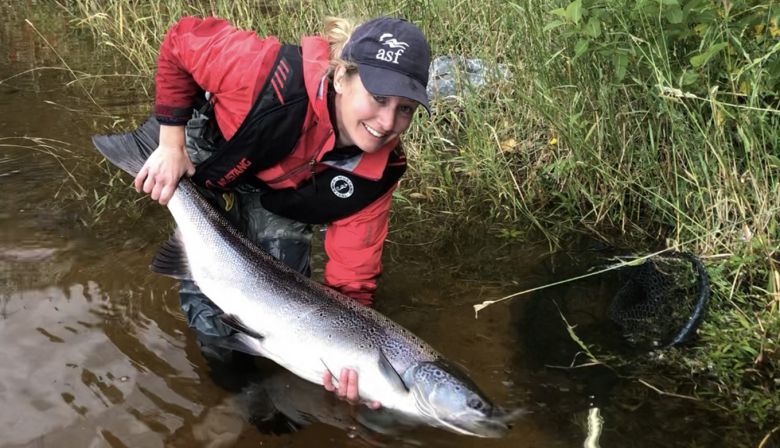 In Newfoundland, the Devil is in the Detail

The Department of Fisheries and Oceans (DFO) has come out with its management regime for Atlantic salmon in the 2021 season.

DFO did not just roll over the rules in place in the two previous years, but made baby steps in recognizing that the numbers returning to Newfoundland rivers are not what they were five or ten years ago.

Here is the broad outline:
The season remains as it generally has existed in recent memory:

June 1 to Sept. 7 on the Island of Newfoundland
Sept. 8 to Oct. 15 in an autumn season on the Exploits, Gander and Humber.

Also, as DFO says on its management page:

Some individual rivers may have different opening and closing dates. Check the watershed management plans section in the 2021-2022 Angler’s Guide for details.

What is good in the management regime?

The reduction in retention in 2021 from three fish to two does recognize to a moderate degree the state of the runs in the greatest number of rivers. Some anglers may grumble at the reduction, but most of those on the rivers who look at the available information will recognize that it was the least they could do. A reduction to a single fish would have been a better conservation decision, but two is a bearable compromise to most.

The environmental protocols being implemented again is a positive step.

The decision to allow three live release fish per day is also a reasonable compromise, but anglers do need to hone their skills at release, and reduce stress on the fish or avoid angling as water temperatures rise.

DFO will not be conducting an official in-season review. Certainly there would be uncertainty for outfitters and lodge owners, but the well-being of the salmon runs should be coming first.

The major and longterm disappointment is that DFO has not gone to a river-by-river management regime. To paint the Atlantic salmon population with a broad brush is not in the best interest of the species, nor is it really in the best interest of those passionate about spending time chasing these salmon in their favourite rivers. In other jurisdictions such an New Brunswick salmon management is well on its way towards a river-by-river management system. Newfoundland and Labrador needs to fine tune its management in this direction.

While it is important to maintain salmon anglers on the rivers to further interest in the Atlantic salmon's future and to help deter poachers, the matter of south coast Newfoundland rivers needs to be addressed more directly.

This region has suffered from many years of interaction with open net-pen culture. Rigorous DFO research undertaken by Dr. Ian Bradbury and others and published in peer-reviewed journals, has shown that the majority of runs anywhere near these net-pens have had their genetics messed up by escapees either colonizing or mating with the wild fish. The progeny, and most especially the second and third generation progeny are far less fit to survive.

Yet in this matter, DFO seems to have conveniently forgotten the Precautionary Approach they have brought forward as words of wisdom; but words they are not living by. 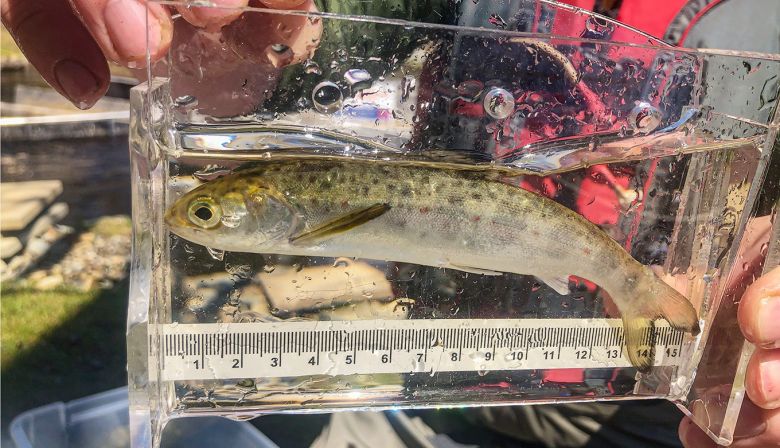 Becoming a smolt in May 2021. Hormones control everything in an Atlantic salmon's life. To become a smolt there are morphological and physiological changes, and also behavioural changes, including a switch to turning downstream, with the current, instead of maintaining a stream position swimming into the current. Photo Nova Scotia Salmon Association 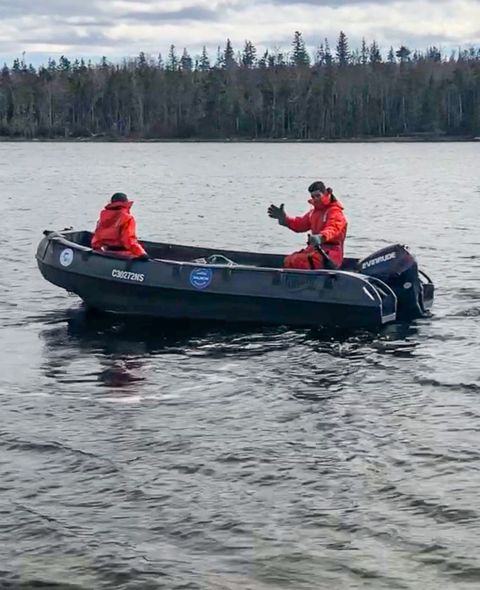 Deploying receivers in Sheet Harbour. Looking closely, you can make out the ASF decal; PEW, through ASF, purchased Whaly for us, and it's been a great help for our estuary work. Jillian Leonard/NSSA
Jillian Leonard, biologist with the Nova Scotia Salmon Association, reports that field work has continued despite ever-tightening Covid-19 restrictions in the province.

Spring 2021 has been a busy time for the Nova Scotia Salmon Association.

Smolt on the West River Sheet Harbour started moving early this year, which allowed for an Apr. 15 installation of our smolt wheel and fyke nets. This early deployment meant that we could continue our work through the most recent COVID restrictions.

Fish trap deployment is the only thing that requires more than two people at a time, which made it a little easier to adapt our fieldwork to lockdown required by the Covid-19 pandemic rules in Nova Scotia.

We currently work in groups of two, travel to sites separately, and wear masks during our work. Right now, the smolt run is winding down for the season and removal of the traps is scheduled for May 21. 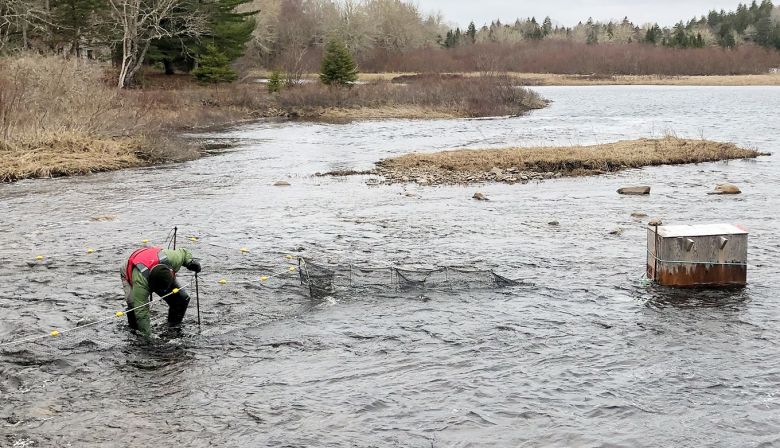 Fyke net on the Little River. This site is our control, meaning it is un-limed. We capture smolt here to compare with our West River Sheet Harbour numbers (limed). Jillian Leonard/NSSA
Jillian Leonard continued:

Weather on the Eastern shore cooperated in April, and we were able to deploy our acoustic receivers in the Sheet Harbour estuary. So far, we’ve tagged 70 Atlantic salmon smolt and 39 sea trout.

These will help us determine habitat use and behaviour of fish as they travel through the estuary, so that we can identify the best sites for artificial reef habitat. This monitoring will continue until July when we remove the receivers and begin planning for Fall habitat installation. 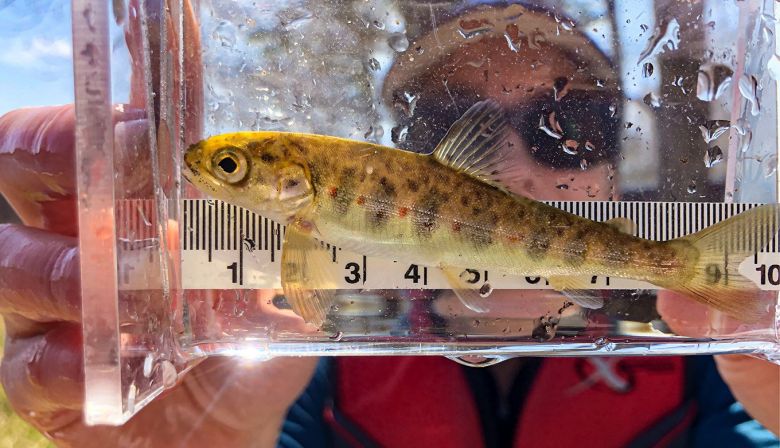 An Atlantic salmon parr being assessed in late April. Jillian Leonard/NSSA
As part of our W.A.T.E.R. Project (Watershed Assessment Towards Ecological Recovery) we’ve been collecting water samples in eight rivers across Nova Scotia.

To determine water quality for each river, we test for toxic aluminium, nutrients like calcium, and overall pH. Once we know if a river can support populations of fish, we can plan restoration work for the places that need it most. The Sterling Research Group at Dalhousie have partnered with us on this project. 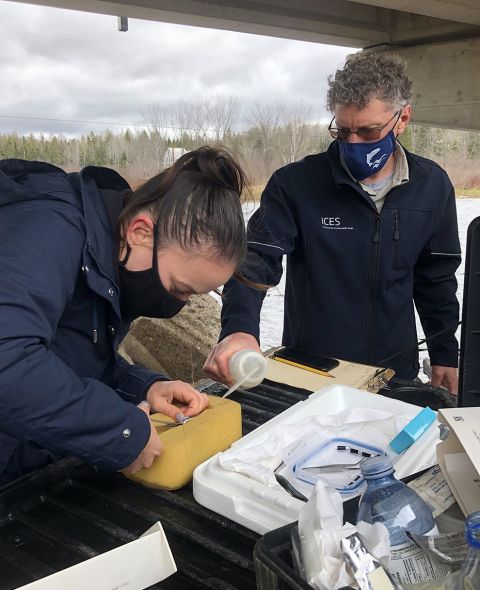 Anquotum's Kayla Ward performs surgery on an Atlantic salmon smolt with ASF's Jon Carr on the NW miramichi. Together with the Miramichi Salmon Association operating the smolt wheel, and others such as UNB and DFO, our excellent partnership is helping to assess the river's total smolt output, striped bass predation impacts, and marine survival. These are all key pieces of the Atlantic salmon puzzle. Nathan Wilbur/ASF
Nathan Wilbur, ASF's Director of Regional Programs, has been on several rivers in New Brunswick, including the Nashwaak, Northwest Miramichi and Renous, getting a first-hand look at tracking and river work being carried out in the province. 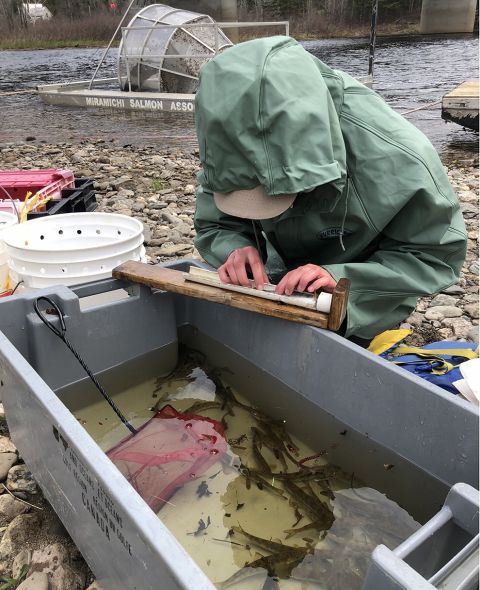 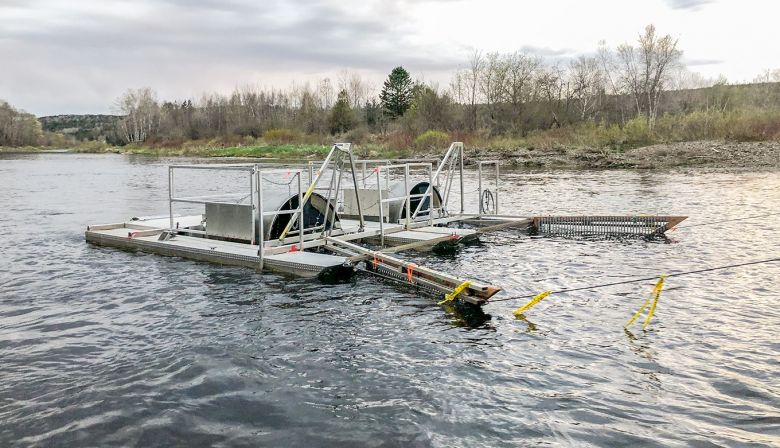 Nashwaak River smolt wheel. As in most Atlantic salmon rivers in 2021, the smolt may be leaving somewhat early. Nathan Wilbur/ASF 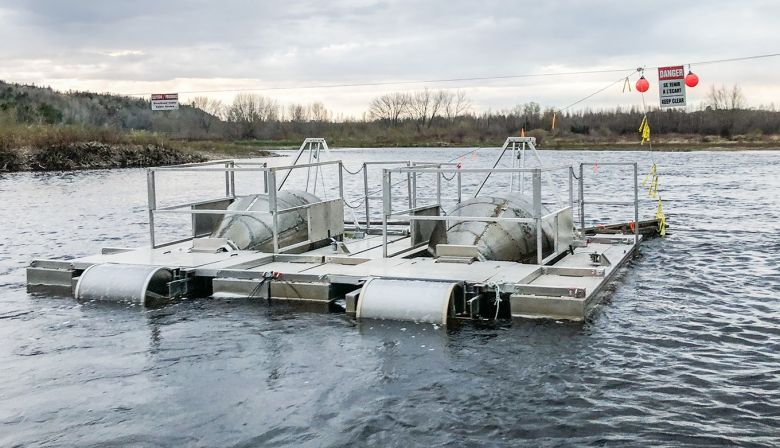 The smolt wheel on the Nashwaak is well marked to warn paddlers and others. Nathan Wilbur/ASF 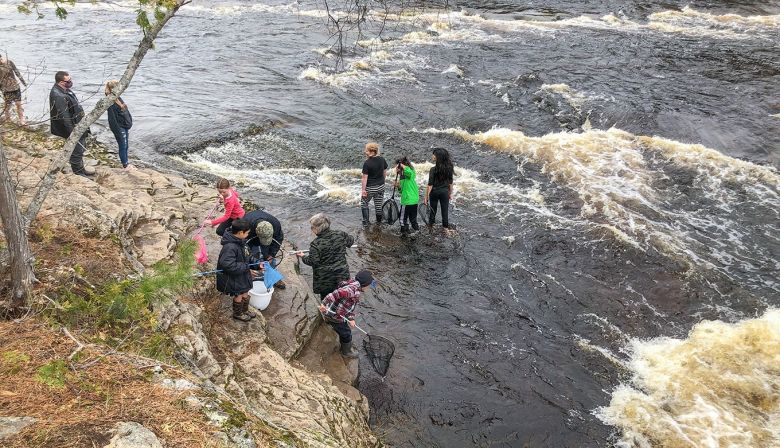 Alewives attract many to the Oromocto River as the fish move upstream to spawn. Image taken Sun., May 9, 2021. Nathan Wilbur/ASF 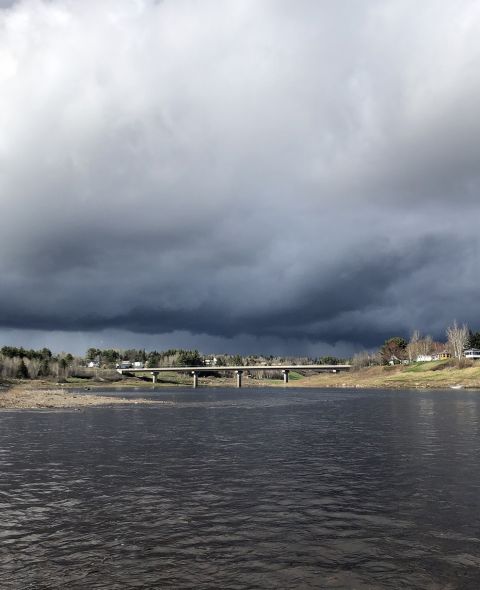 Hail storm brewing over Quarryville on the Southwest Miramichi on Thurs., 12 May, 2021. Nathan Wilbur/ASF 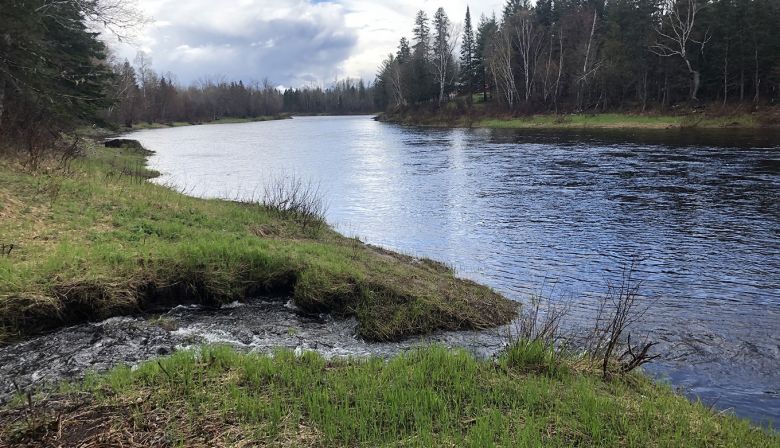 With water now flowing freely under the new bridge span, the gates were permanently closed on Wed., 11 May, 2021.

There is a strong restoration effort going on related to the Petitcodiac and Pollett, and everyone would like to see Atlantic salmon returns increase towards healthy numbers.

The video below is of the Petitcodiac channel and the gates just as the final steps were made to close them. Video by Christopher Bragdon, and he has been doing a great job of following this project. 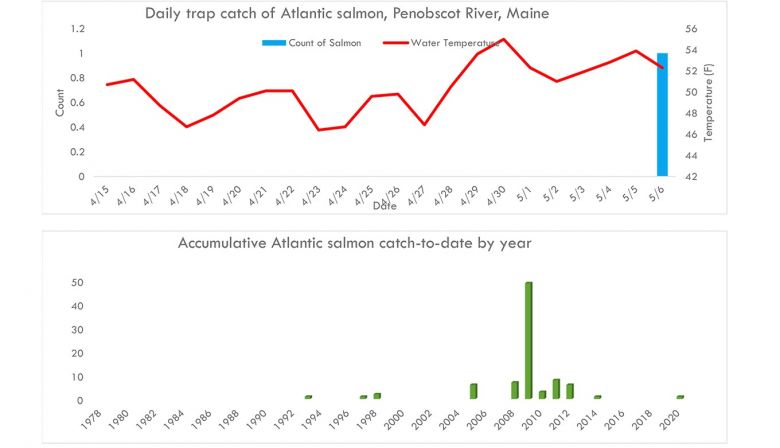 Water temperatures have stayed cool… 51 deg this morning. Fish are slowly coming in. We passed our first Atlantic salmon of the year.

A fun video of watching via drone a smolt wheel in operation on the Sandy River set to Jurassic Park music. Perhaps someone finds Atlantic salmon rather an ancient-looking creature. The video was by Brandon Kulik of Kleinschmidt.

An Update from France 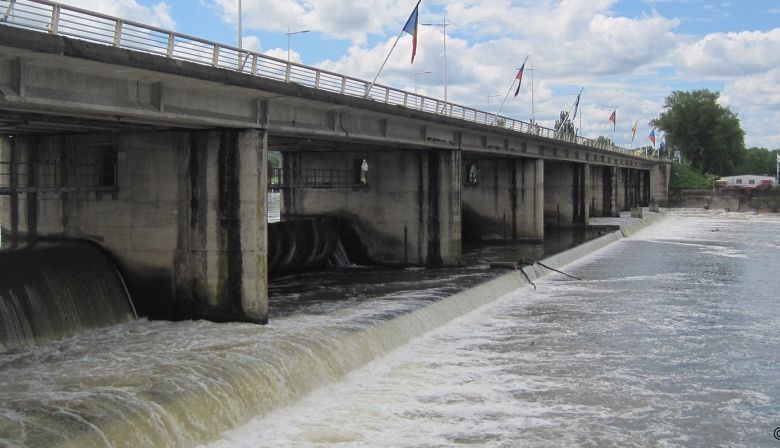 While there is a significant dam at Vichy on the Allier, there is a fishway with underwater viewing chamber. Photo LOGRAMI
Loire

On the Gave d'Oloron there have been 51 Atlantic salmon. Also, one on the Pau and one on the Saison 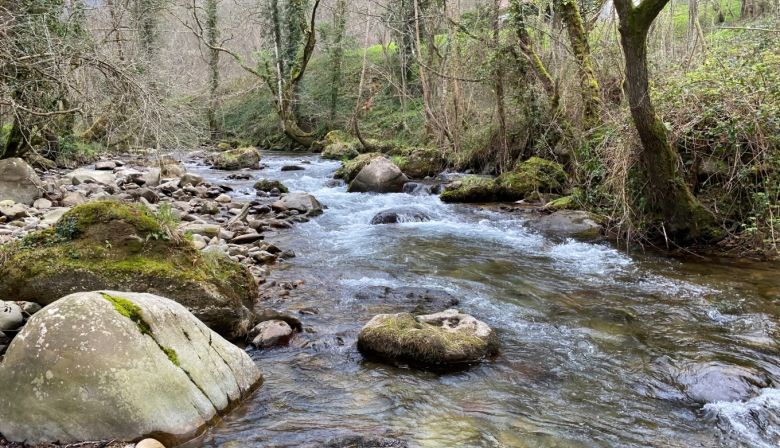 The headwater streams of the Pyrenees rivers are often very green and lush. This is the Laurhibar, a tributary of the Nive. Photo Fédération Departmentale Pêche ( Pyrénées-atlantique )

The salmon rivers are experiencing an earlier spring this year, at least in general. And this year the many conservation organizations and some government departments were ready with plans to implement tracking, assessment and other activities that are important not just to the science, but to the management regime for anglers as well.

To all of the hundreds of individuals working the long, and wet, hours, we hope there is a special feeling of accomplishment in being able to deal with a continued pandemic safely while still accomplishing good science.

Bravo! I say to them.