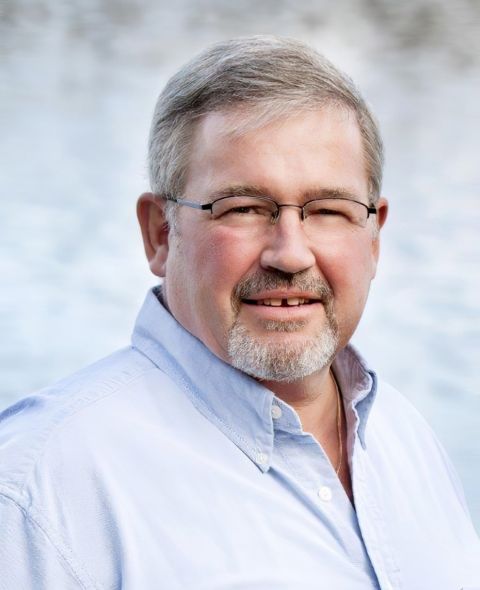 Mike Crosby
Mike Crosby has died, and the world of Atlantic salmon has lost a friend.

I feel much sadness and a profound sense of loss at Mike Crosby’s sudden and unexpected passing earlier this week. Mike was the President of the Nova Scotia Salmon Association and a Director of ASF Canada. He was a life-long salmon angler and dedicated conservationist who devoted much of his time and personal resources to advancing the conservation work of ASF and NSSA. He chaired the first ASF/NSSA fundraising dinner in Halifax 32 years ago and supported countless salmon conservation activities and fundraising events, especially in his home province.
Over the years Mike was involved in the ownership and management of a number of salmon outfitting operations in Labrador and the Gaspé. He also owned Tight Lines Lodge with a few friends on his favourite river, the Margaree, where he spent many happy days with family and friends.

Mike was a close personal friend of mine for more than 30 years and longer than that to several fellow ASF Directors. Mike was well known throughout the salmon world and was one of the best anglers I ever had the privilege to fish with. As good an angler as Mike was, he was an even better storyteller and friend. Mike leaves his wife Anne, children Heather and Mark and two grandchildren. Mike was only 67 years old.

Mike Crosby often shared his observations on Atlantic salmon in this column through the years, and in many other publications as well.

At the end of this week's Rivernotes, take a few minutes to watch him tell his story about the catching, live release and research of a giant male salmon on the Restigouche River in the late 1980s. It was between 60 lb. and 80 lb., as determined by photographs.

Mike Crosby was someone who truly was passionate about all he did, and that included his experiences with wild Atlantic salmon. 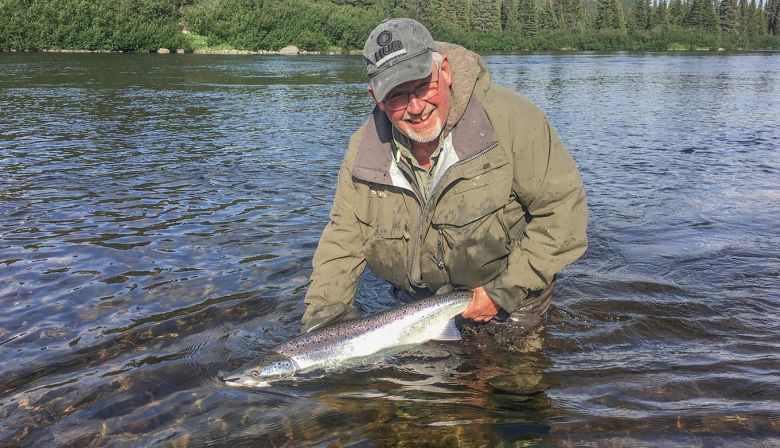 Mike Crosby, always at home in a river with a wild Atlantic salmon to release and continue its migration. 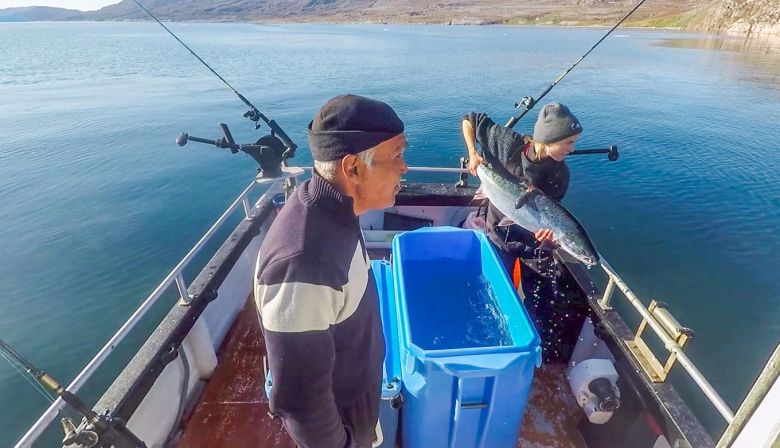 ASF's Heather Perry moves an Atlantic salmon from the holding tank to the ocean to continue its preparations for overwintering, and migration back toward home rivers. Jonathan Carr/ASF
ASF Biologist Heather Perry has returned this week from Qaqortoq, Greenland where she and Jonathan Carr and assistants were able to attach 70 healthy wild Atlantic salmon with satellite pop-off transmitter tags.

I caught up with Heather when she was still driving home through Nova Scotia, and asked for her impressions of this very challenging field work.

"This Greenland tracking research was the most incredible thing I have ever done," she said, "To help this incredible work go forward so successfully this year was truly amazing.

"The work was intense, with a lot to learn. Definitely it was a mindfulness boot camp, and it called for being focused at all times."

There appears to have been more Atlantic salmon feeding off Qaqortoq in autumn 2021 than in other recent years.

"I was surprised at the the number of Atlantic salmon. It was exciting. We started with a few salmon each day on the water, but we reached a maximum of 17 salmon in one day."

The satellite transmitters should be popping off the fish in about seven months, late April or May 2022.

By last week all the satellite tags were used, the equipment stored, and it was time to head home. 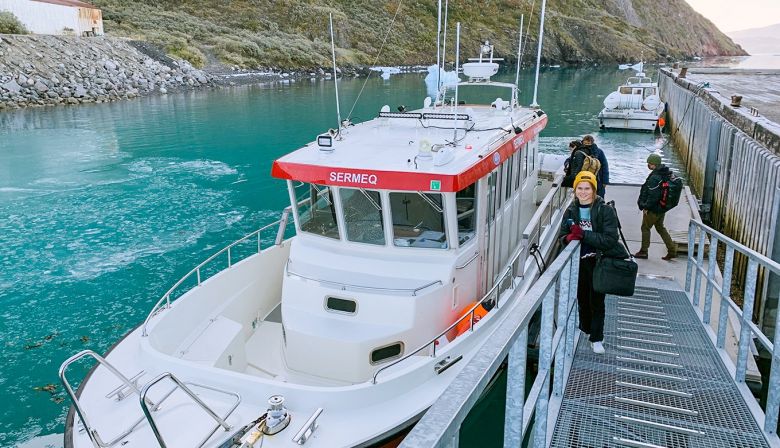 Heather Perry taking ferry from Qaqortoq, to weave 90 km through the islands to Narsarsuaq to catch a plane. The vessel is a Targa 37, 12.4 metres long, with a cruising speed of 28 kts. Vessel built in Finland, with a Volvo Penta engine from Sweden. Photo ASF Research.
"First, I arranged for a Covid-19 test before travelling. I left Qaqortoq, and took a boat 90 km. to Narsarsuasq. At times it was beautiful, breaking through the small drift ice.

"After an overnight in Narsarsuasq, I flew from there to Kangerlussuaq, north up west coast. Then to Copenhagen, Denmark. I arrived at 9 pm. Had another Covid-19 test, this time from a free tented clinic just outside the airport that guaranteed results within 24 hours.

"After an overnight in Copenhagen it was a 6 am flight to Amsterdam. Then next day to Toronto. I had filled out the ArriveCAN app., including the negative tests, and had no problem boarding. But I did see others being refused boarding because their documentation was not in order.

"At Toronto everything went quickly, with the ArriveCAN smoothing things nicely. Then it was a flight to Halifax, and driving to the ferry at Digby.

While scale samples will allow the origins of the tagged Atlantic salmon to be determined, the real work will begin when the transmitters "pop off" the Atlantic salmon in the months ahead, and the short antenna beams the data up to satellites, and then is passed to the ASF Research department.

Not only will it give information on the movements of the salmon, but also the depths at which they are swimming. 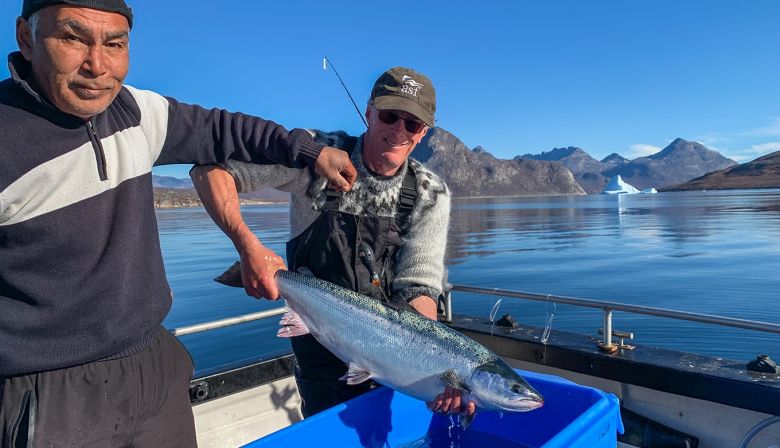 While Greenlander Liili Pederson holds up the satellite pop-off transmitter's antenna, Jonathan Carr prepares to release one of the 70 salmon back to the waters off southwest Greenland. Heather Perry/ASF 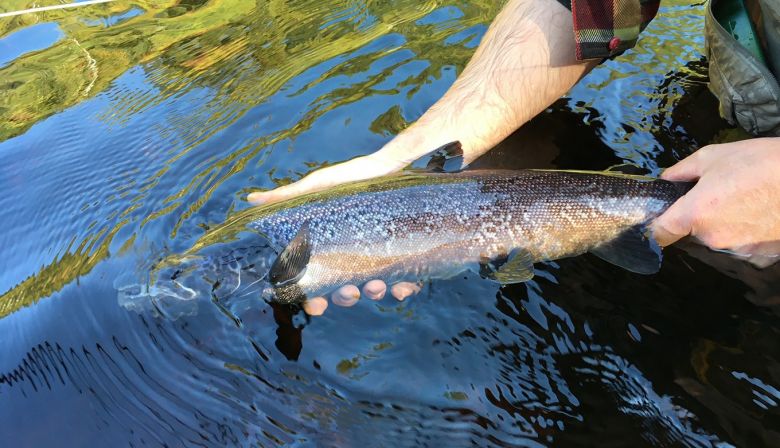 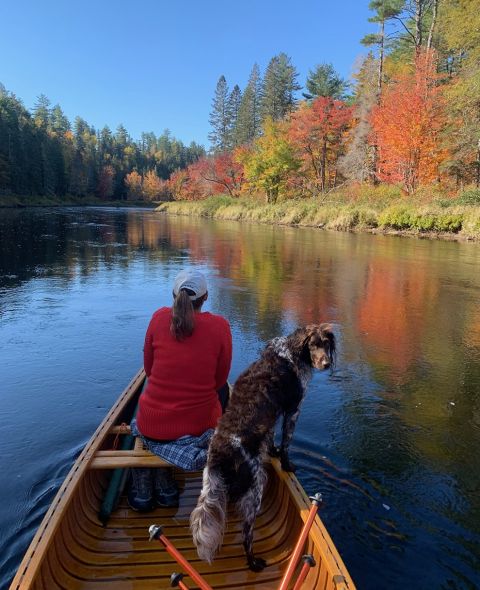 Julia Carpenter takes in the autumn scenery last weekend on the Cains River. Nathan Wilbur/ASF
The Atlantic salmon season on most rivers in New Brunswick closes today. A few are later, with the Nepisiquit the 22nd and the Bartibog the end of the month.

For some of us who live along the rivers here on the Miramichi we often take for granted the beauty of the rivers and forests that surround us.

I was able to spend time yesterday with family from Florida on the Dungarvon and Renous rivers.

Some of these folks have never seen the Fall colours like we have on the Miramichi. The leaves are starting to fall but most are in full colour, and it couldn't be more beautiful.
Although I didn't have the time to cast a line, the urge to be on the river with a fly rod was very tempting.

Rivers are at a nice level for angling.

Day temperatures couldn't be better and that picturesque view that surrounds one this time of year makes angling that much better. We have the odd angler here on the Miramichi who is trying to explain all this to loved ones back home as to why they need to stay a bit longer. Some of these folks have been here since early September.
From what we are hearing here at the tackle shop, all rivers tributary to the Southwest Miramichi are producing salmon. For most we wish the season was a bit longer. Friday's end of the season is coming way too fast. All in all, a great season. 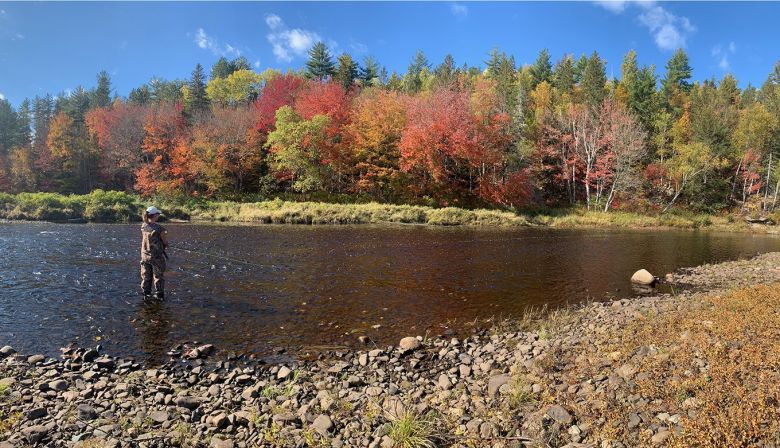 Still no run and extremely slow since Monday. Not seeing a lot of fish anywhere. Just one or two salmon per pool, if that. No signs of spawning, or of any redds to this time. 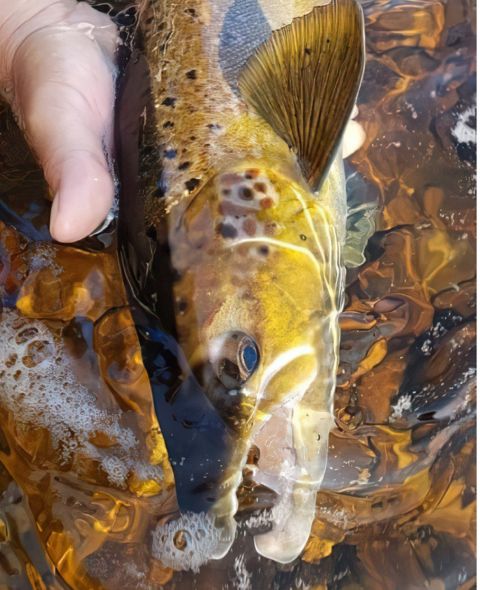 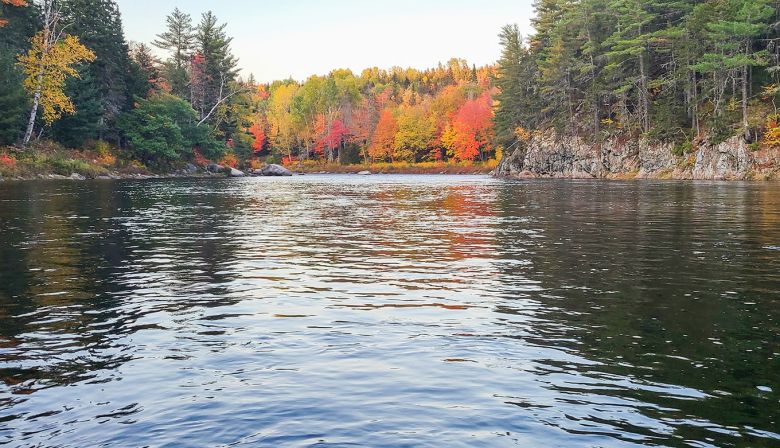 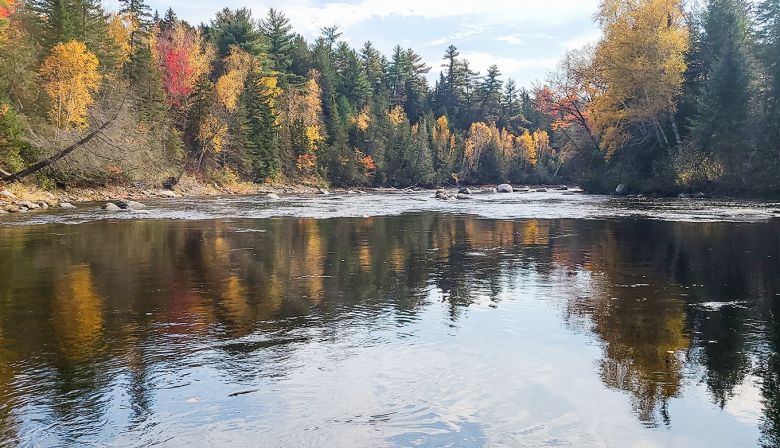 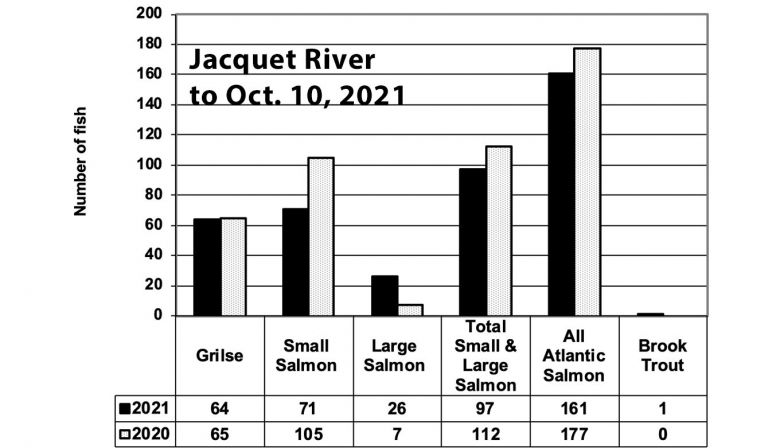 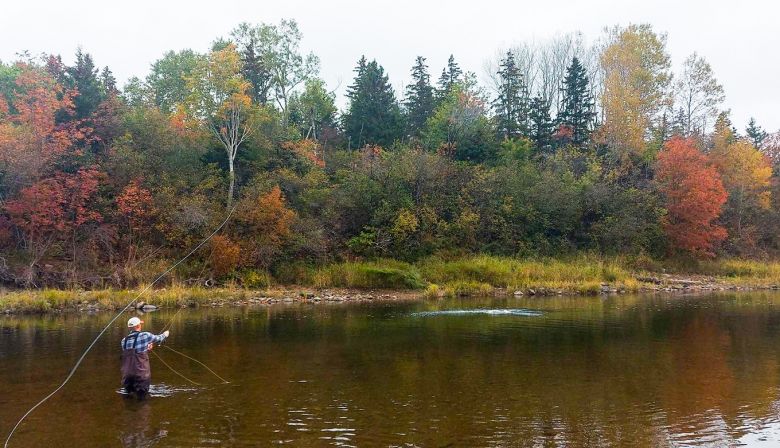 Patrick Poirier has these notes on the river:

The Margaree River is low for the middle of October, but there are still fish being hooked throughout the river. Meanwhile, the autumn scenery is a magnificent backdrop. 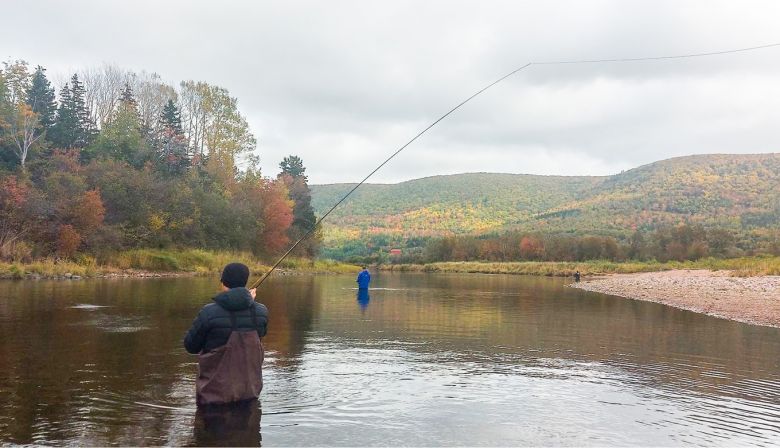 October at the Dollar Pool provides sweeping vistas of the Margaree, with autumn-coloured hillsides and salmon moving upstream, although water is low. Photo Patrick Poirier 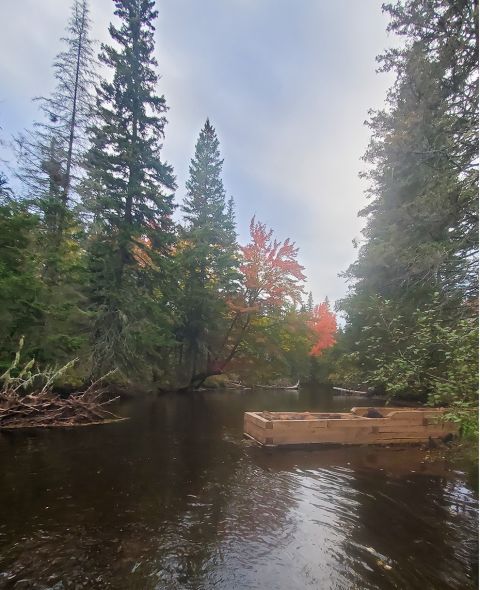 The water remains unseasonably low, but as I write this the rain is coming down so we are hopeful for a bit of a raise in water.

There are still very few fish in the river. I've been out every day for the past four days and at best I've seen a single fish here or there, not the multiple fish we are accustomed to.

I haven't heard of any fish being taken yet this week. All signs would point to the fall run still being at least a few days off. 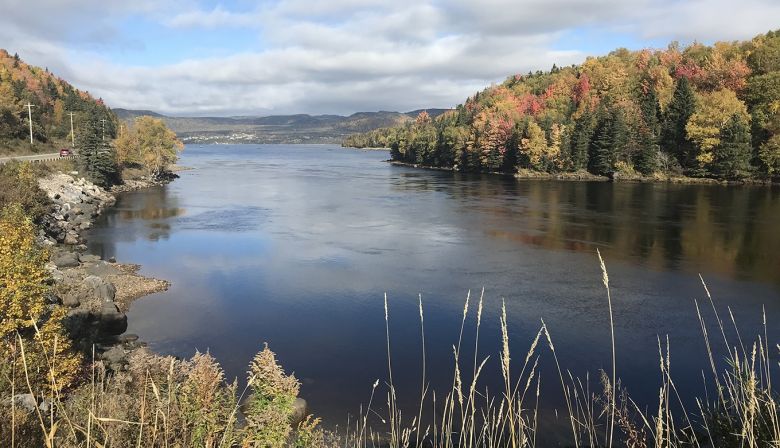 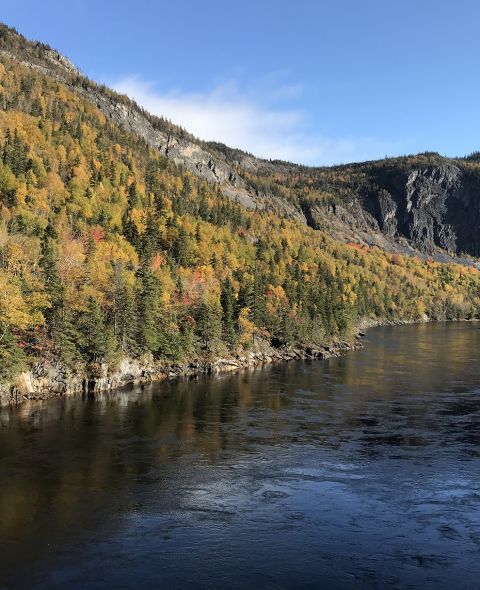 With the COP26 United Nations Climate Change Conference soon to begin in Glasgow there has been extra attention on the decline of Atlantic salmon in Scotland and its rivers.

There has been a major initiative in the last couple of years to track Atlantic salmon using the sonic transmitter technology pioneered years ago by ASF and VEMCO with support from DFO.

The video below has just been produced by the Atlantic Salmon Trust, a sister NGO in the United Kingdom
Also of importance, there has just been released a study of the interbreeding of escapee cage-reared Atlantic salmon with wild salmon in Scotland. Results are truly enlightening.

More than 220 sites had salmon tested for tainted genetics. In the map below, those with orange or red dots were severely impacted.

In some ways it builds on the southern Newfoundland work of Dr. Ian Bradbury, but obviously with a perspective over a wider geographic range, and in the eastern Atlantic. 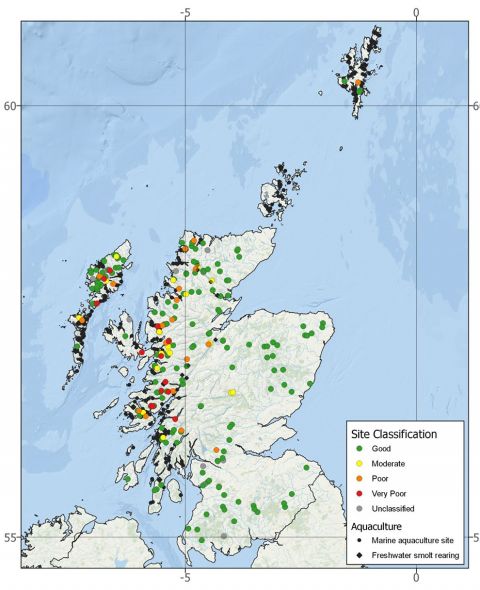 Mike Crosby always enriched the heritage of wild Atlantic salmon in eastern Canada with his interest in the species as well as promoting its importance in our economy and heritage. Take a few minutes to listen to him tell the story of his "monster" Restigouche Atlantic salmon.

We have all been enriched by sharing his views of the Atlantic salmon's world.
He will be missed.