The Rains that Bring In Atlantic Salmon 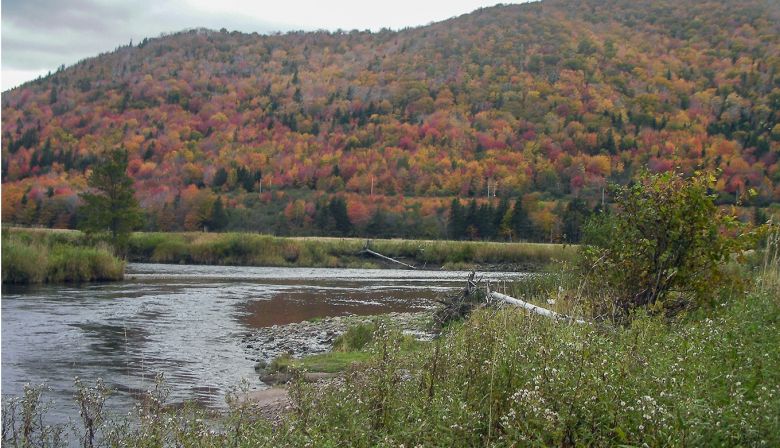 The Northeast Margaree is deeply into its October colours now, and with regular rain the Atlantic salmon are moving upstream. Photo Greg Lovely
A considerable portion of the Atlantic salmon's range in North America is getting dumped on as the week ends, and while it may be blustery for the people, the fish are definitely going to be happy about it.

As we swing into "Pumpkin Season" we are also entering the spawning season for Atlantic salmon. I am sure we are collectively wishing them well.

I've been out every day since Monday and landed a fish each day on Tuesday, Saturday and  onMonday of this week. My father also hooked into a small salmon today but lost it (his third outing this fall). I missed setting the hook on three other fish over the weekend and at least had raises each day.

As the hunt for our old adversary the Atlantic Salmon drags into the final two weeks, most are feeling at least somewhat optimistic. The fishing for the first part of October was not bad following a slight raise in water from Dorian but had slowed down towards the start of this past weekend as the water dropped. Another slight raise in water took place over Saturday night and conditions were better on Sunday but the water is steadily dropping again. Another bump would be greatly appreciated. 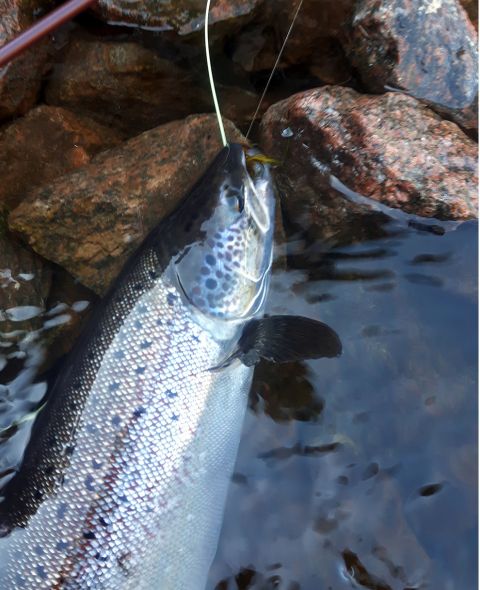 A brighter fall fish taken last week compared to what we are seeing lately. Taylor Main photo
Some fresh-er grilse had been taken over the first seven or eight days of the month and put a number of anglers on the board. Anything I've seen showing over the past five days has clearly been kicking around the river for quite some time and not surprisingly reluctant to take flies. That main run of fish should start trickling in any day now. 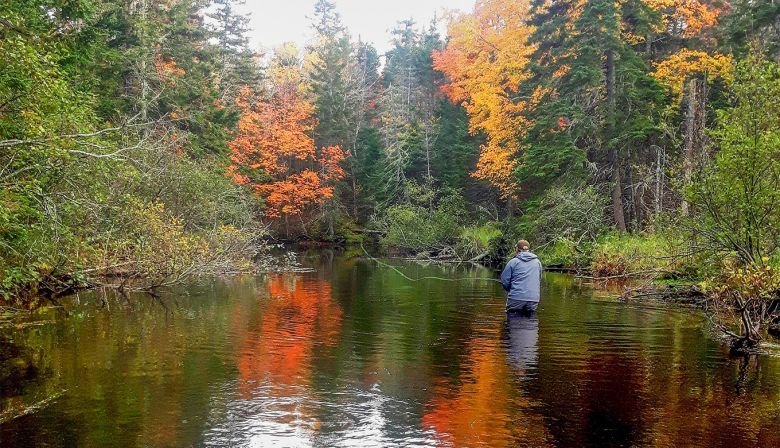 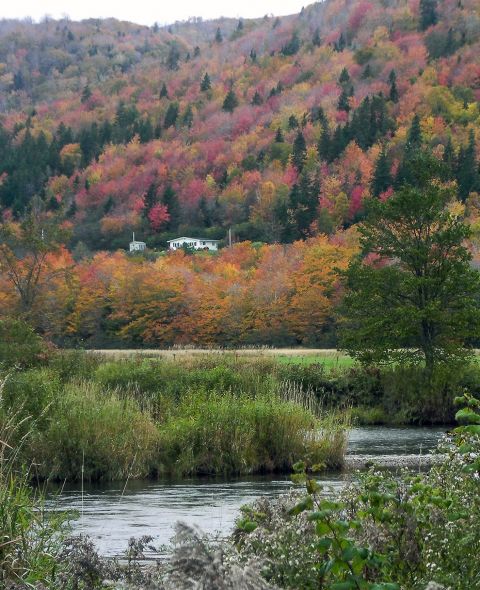 The deep colours of the forests on the ridges of the Northeast Margaree make it an amazing place in October. And plenty of salmon in the river. Photo Greg Lovely
Margaree

Hurricane Dorian did not damage all the leaves I guess.Fishing on the Margaree the last few days has been good.

There are a lot of visiting fishermen this Thanksgiving weekend.

The Baddeck and the Middle rivers remain low, although some fish are being hooked in both. The Margaree got a little bump in water levels and that seemed to bring in the stragglers. I am seeing practice redds in a lot of places. It won’t be long,before the “party” begins. 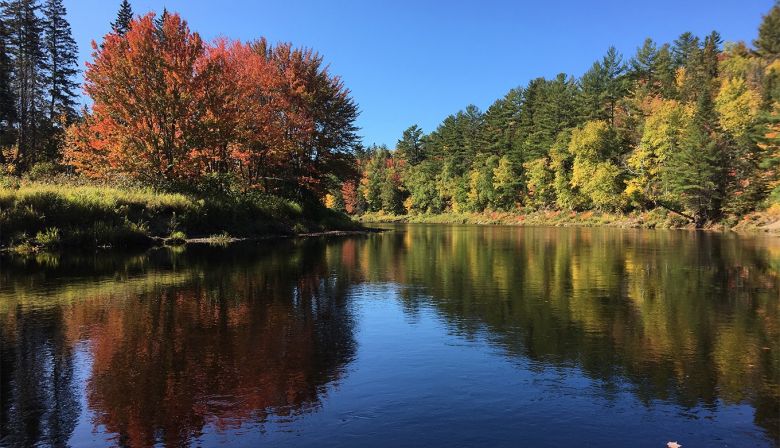 It was quite slow angling here on the Miramichi last week Even after a good rain it didn't seem to pick up. Finally by the weekend we started hearing from anglers who were hooking into salmon. Actually, some people did quite well. We had reports of salmon being hooked in the 40 in. and 40+ in. range.

Weather and wind conditions couldn't have been better the last few days of the season. With the angling picking up it was hard to watch the last days slip by. For some of us ,now is a time we can enjoy watching for the Fall spawning on some of our home rivers, then the off season and the anticipation of another angling season for 2020.

The Dungarvon barrier, on a tributary of the Southwest Miramichi, to Oct. 13 had 115 grilse and 90 large salmon, compared with 2018 numbers of 108 grilse and 87 large salmon. Almost the same.

For Additional Food for Thought:

The barrier data above only reflects the past couple of years, when perhaps more context is provided by DFO's time series at the Miramichi Trapnets (below) dating back to 2004. More on this in weeks to come. 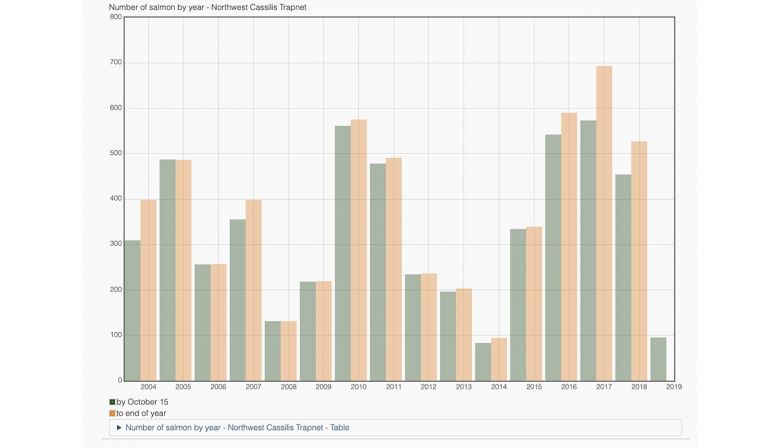 Large salmon counts at Cassilis Trapnet on the Northwest Miramichi as of Oct. 15, showing numbers 2004 to 2019. 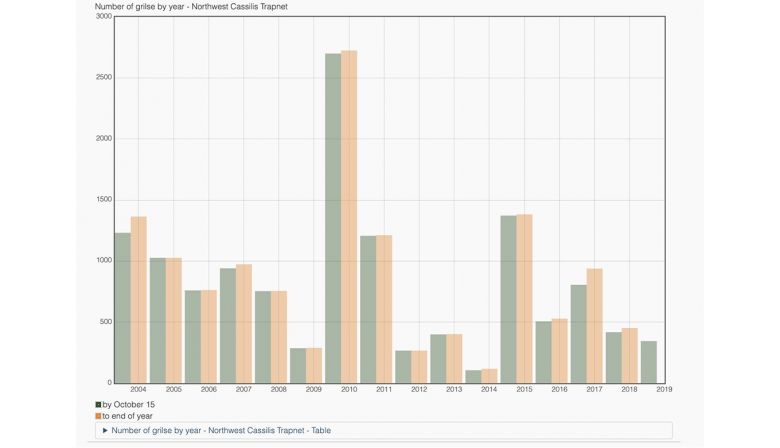 Grilse counts at Cassilis Trapnet on the Northwest Miramichi as of Oct. 15, showing numbers 2004 to 2019. 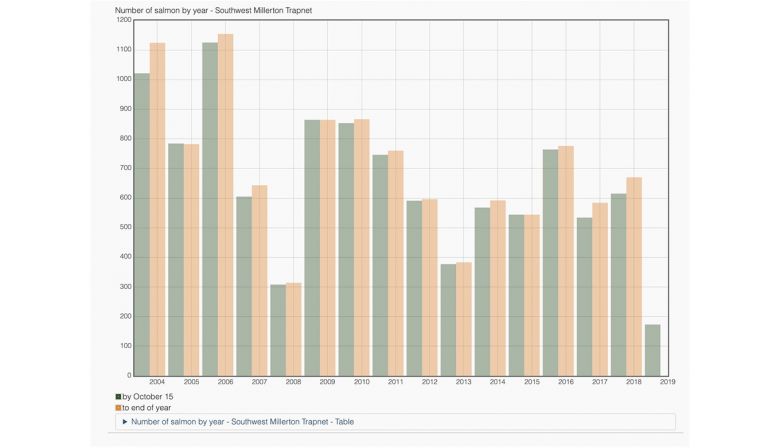 Large salmon counts at Millerton Trapnet on the Southwest Miramichi as of Oct. 15, showing numbers 2004 to 2019. 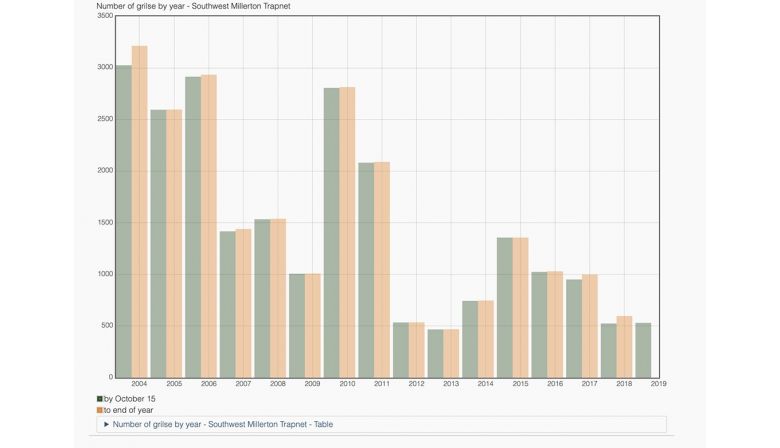 Grilse counts at Millerton Trapnet on the Southwest Miramichi as of Oct. 15, showing numbers 2004 to 2019.
Petitcodiac

We had a fair number of leaves, and one of the wings of our trapnet was leaning a bit, but the trap came through fine. We made a few upgrades (added another stub line & reinforced the link between the body and the wing) and I'm confident it should be ok fishing overnight into Wednesday. We caught another adult salmon from the October 1st release 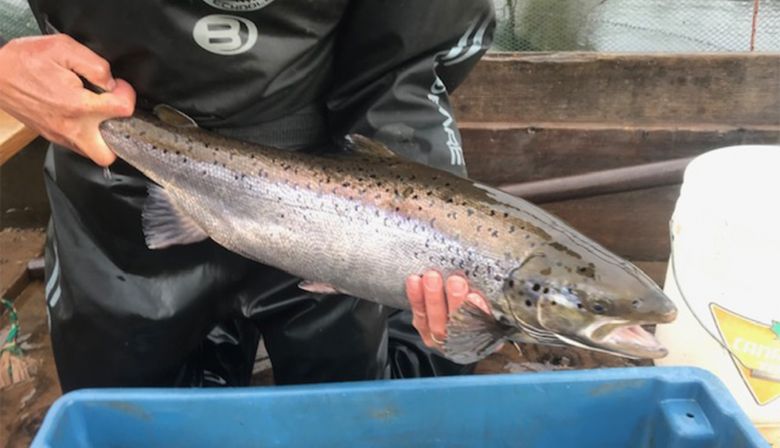 PIT tag 982126057176188 Female Released 1 Oct 2019 Pollett Upper Site 2017 Cohort. The picket trap for sampling the Petitcodiac was set May 29 in the Salisbury area, and continues to have a variety of migratory species. This year it was moved upriver, above the confluence with Little River, to get above the head of tide. Photo Fort Folly Habitat Recovery Project. 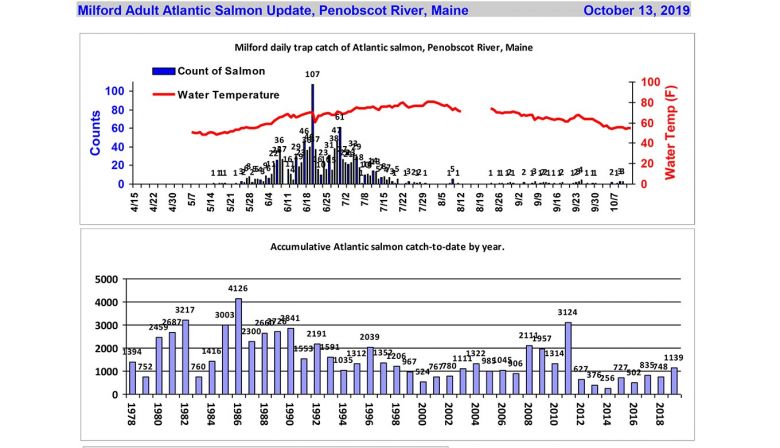 10 more new fish have been captured at the Milford Lift in the past 2 weeks! Plus 2 more at Orono!

River temperatures are cooling down rapidly. Spawning time is nearly upon us. Activity at Milford will most likely continue to slow down as temperatures and daylight hours decline.