With Family and Friends, New and Old 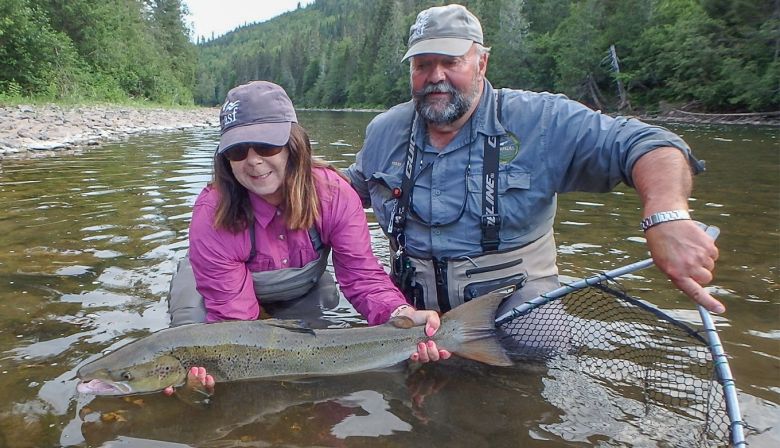 For Sylvie Malo-Clark and husband Peter D. Clark, the perfect way to celebrate 40 years of marriage was at Martha's Run on the Grand Cascapedia, connecting with a 24 lb. Atlantic salmon on Aug. 27, 2019. Teamwork! Photo Zachary Legree
The experience of an Atlantic salmon river can form strong bonds, between people and with our environment.
As Sylvie Malo-Clark writes, for she and her husband Peter, there was no better way to mark four decades together:
"We decided to celebrate our anniversary on the Cascapedia. Even though the fishing conditions were tough I was able to land a grilse and a 24 lb. large salmon, and Peter brought in a 20 lb.
The love of rivers is passed down and when Eamonn Fagan and wife Kristen Solda decided to visit the Cascapedia on August 29th, daughter Katie was along for the ride. 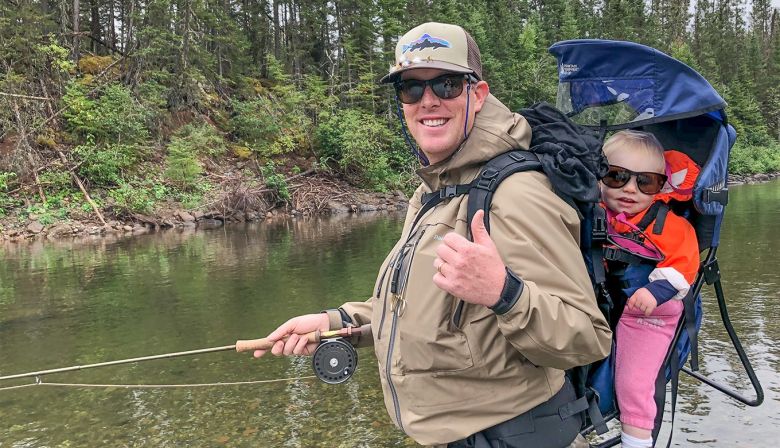 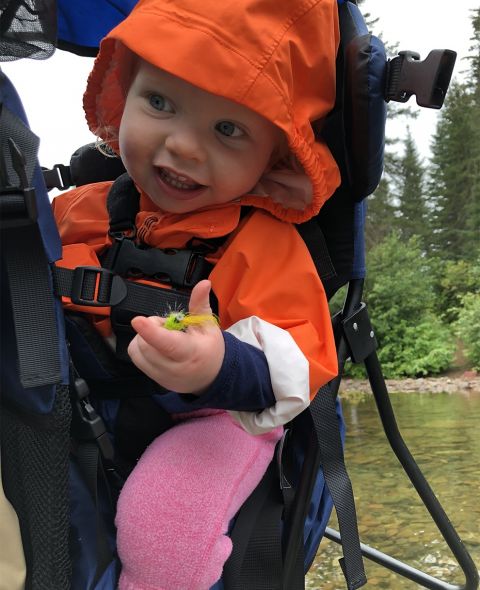 Katie holds a hookless Carter bug and watches her father cast. Photo Kristen Solda
Salmon and salmon rivers are also a place to reflect together with family as to the future of these wondrous places, according to Brock Curtis of Blackville.
The picture below is of a Fall fishing trip to his cabin on the Renous this past weekend. Brock Curtis says:
On the Renous trip: Besides honing their casting skills, talking salmon fishing, and discussing conservation projects, we had time to talk about changes in our rivers and the impact of current forestry practices. After seeing five springs in 400’ of river front that are drying up, the kids and Minister Stewart really "get" the necessary changes required to save our rivers in the future. We need more of this age group angling. They are much more insightful than we think. They have some very interesting and common sense solutions to saving our rivers. 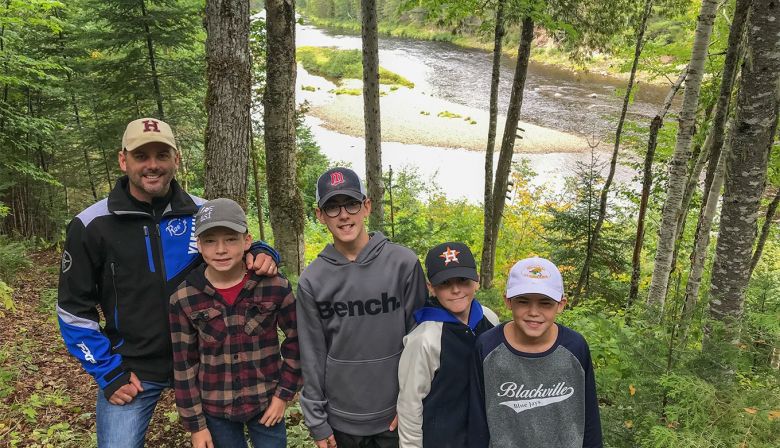 New Brunswick's Minister of Aboriginal Affairs, Jake Stewart, along with his sons, River and Roman, and Brock Curtis's grandchildren, Brennan and Shamus, enjoy an early fall trip to the Renous River. Photo courtesy Brock Curtis
Angling and adventure is good for families, it also brings friends together. Kastine Coleman from Corner Brook, Newfoundland, recently hosted six women at Flowers River Lodge in Labrador for a few days to close out the season: 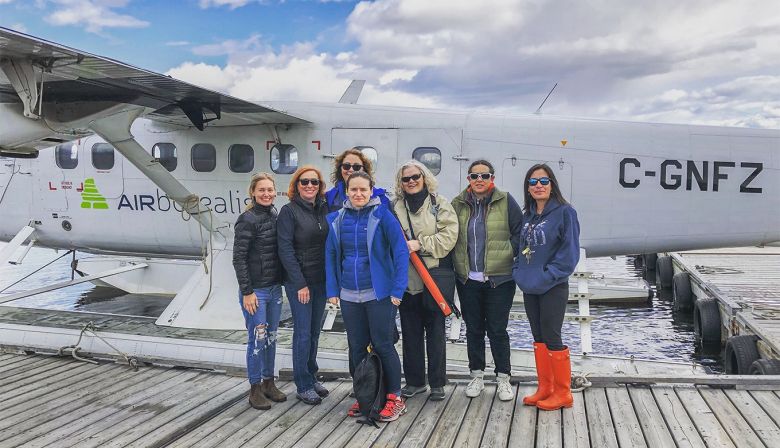 The point of no return for a group of women on their way to the Flowers River in Labrador. Photo Kastine Coleman 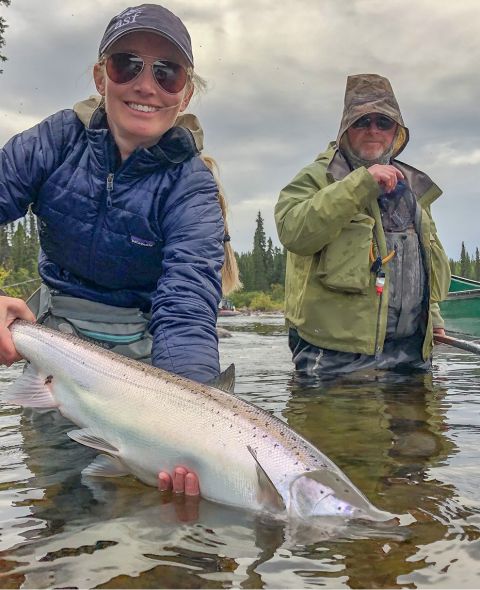 With guides, our chef and sommelier, there were 12 of us on the water.
There were a number of fish visible in the water, the small males (5-12 pounds) were taking flies eagerly. They have changed colour and are now brownish with reddish-orange flecks. The large males were tricky to get on the take and we only had 15-20 come to the fly throughout the week.
There was a run of fresh females (16-18 pounds) in the river, still bright silver with sea lice attached, very strong and they looked & played like July fish! 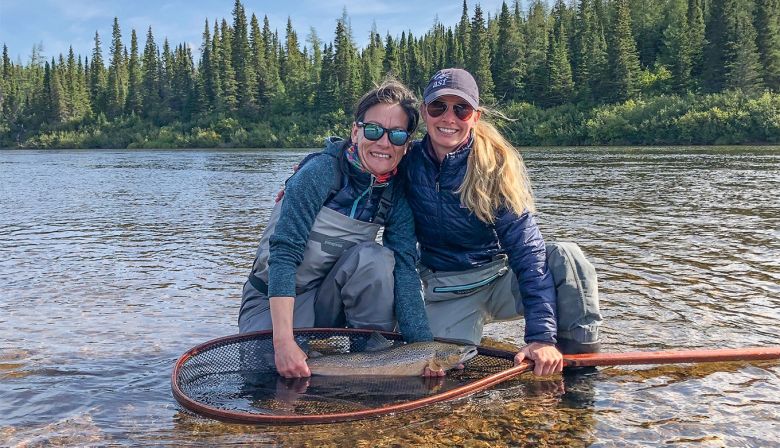 Another great release on the Flowers. Photo from Kastine Coleman
The weather was brilliant, sunny and warm with light wind, while water temperatures were cool ~ maybe 5-6 C. The water level was high all season and has just dropped slightly, showing sand bars and rocks that were hidden since 2018. This made the pools a little more defined and easier to navigate. Unfortunately we ran out of season, catching & releasing fresh salmon until sunset on Sept. 15th.
Kastine Coleman, www.TightLoopsTightLines.com
Mike Crosby of Flowers River Lodge adds:
The season ended well on September 15, with little impact from Dorian. New fish continued to enter the river until the last day. Fishing was spotty, but there were some very large specimens in the pools. Our camp manager, Terry Byrne, who has seen a lot of large fish in his time, lost one at the net the other evening which he said was a legitimate 35+ pound fish. 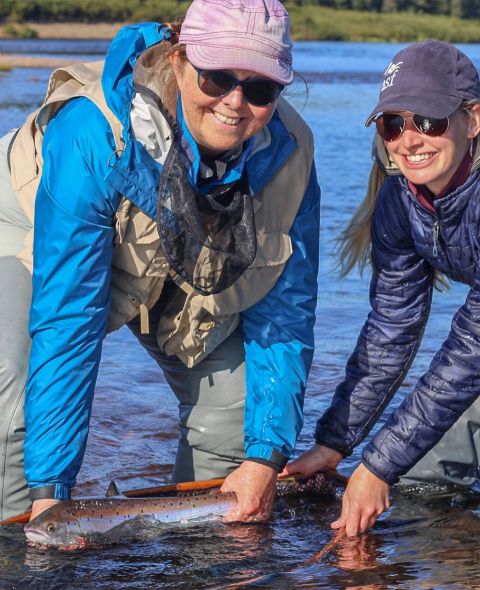 A small male being released on the Flowers
Dwight Lethbridge of Pratt Falls Lodge on the Eagle had a group in early September, that thoroughly appreciated the river, even with its challenging conditions:
"Our season has now officially ended as of Sept 15. We had guests fish the river from Aug 29-Sept 8. During that time frame the river was high and water level continued to rise with wet cold weather. We had four guests and they were still able to find some fish in the tough conditions. It helped having the whole lower river to themselves. All fish caught with the exception of one were bright fresh fish.
They fished Lower Eagle and White Bear and managed a CPUE for their 10 days of .98! Almost a fish a day per person, on average, with quite a bit of time spent hiding out at camp from the weather. Not bad, and there were plenty of sea run brook trout in the river. 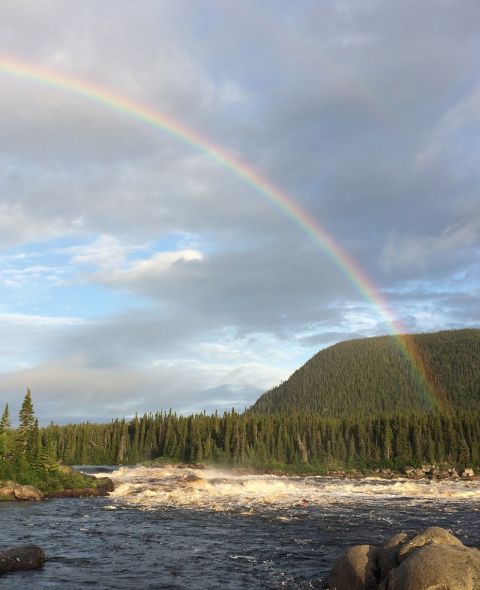 The Eagle River is a wild and majestic place. Photo courtesy of Pratt Falls Lodge
Overall we had a great year. Would be nice to see some lower water for a change because high water was a theme for the entire season.
Thankfully, Eagle has been providing a plentiful enough resource that the huge river still produces some success on the high water.
Average flow for the season was way above the mean. We haven’t had a chance to calculate our season totals and CPUE but I’m certain it will fall into our normal range, so no complaints about that here." 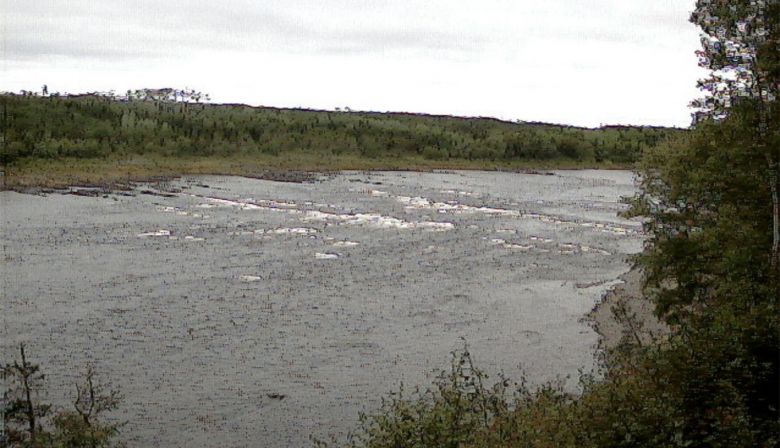 Exploits River at Badger Steps, on Sept. 17. Fisheries and Oceans Canada closed the river to angling at the end of the retention fishing season and just before the brief live release only season was set to begin.
Exploits Closed
One can certainly wonder what goes through the minds of people at the Northwest Atlantic Fisheries Centre in St. John's, Newfoundland. Despite low numbers of returning salmon, the Exploits was kept open through the retention period of the season, but closed on the handful of people who partake in the fall live release fishery. There have been several puzzling decisions on the recreational fishing season in Newfoundland this year.
So for the fall fishery remains open on the Lower Humber and the Gander.
Don Ivany, ASF Director of Programs for Newfoundland and Labrador has some comments:

Gander
Ken McLean reports that water levels are extremely low on the Gander River. A few people are fishing but there aren't many to be caught in the lower reaches of the river. Water levels are so low they are having problems navigating the river with Gander River boats.
Dave Vardy said there is a decent sign of fish in the upper reaches of the Gander near the spawning areas.
Lower Humber
Water levels are a bit high, with cool temperatures. Fair bit of angler activity and some large fish being found.
Counting Fences
The counting fence numbers for Sept. 8 are up on the DFO site: 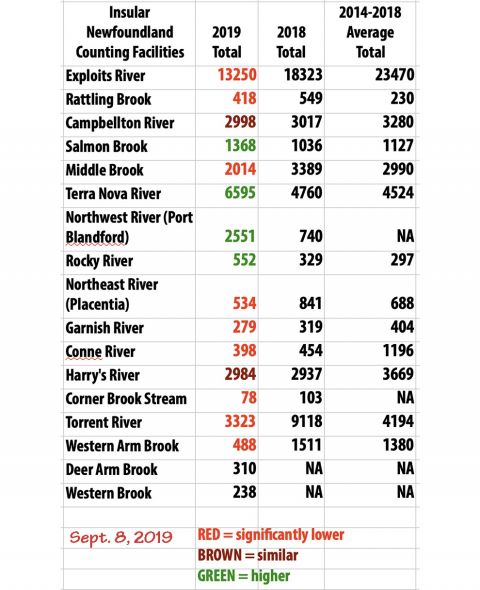 Greg Lovely, who lives near the Northeast Margaree, says:

Water levels in the Margaree River are still fishable but a little increase would be nice. I have had success every day for the past week or so, but only one fish has been fresh. That was Monday, a multi-seawinter hen.
From what I can tell, there is not much of a Fall Run of salmon yet. Fish are being hooked every day, but many are quite dark, having been in the Margaree River for quite some time. The leaves are just starting to turn colour.
Two weeks to go before the Middle and Baddeck rivers open to salmon angling. Here's hoping the salmon fishing is as good this year as it was in 2018. 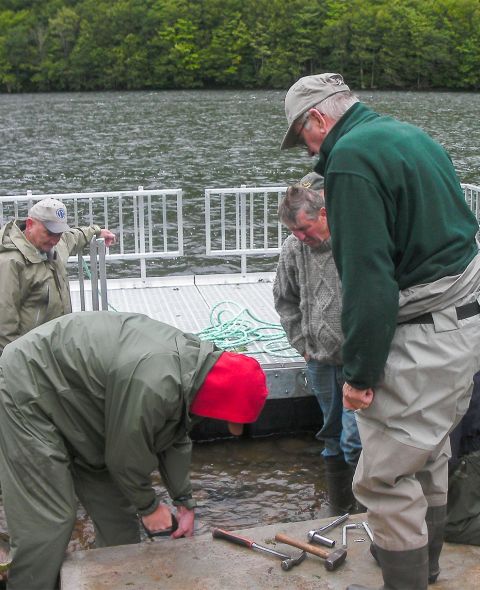 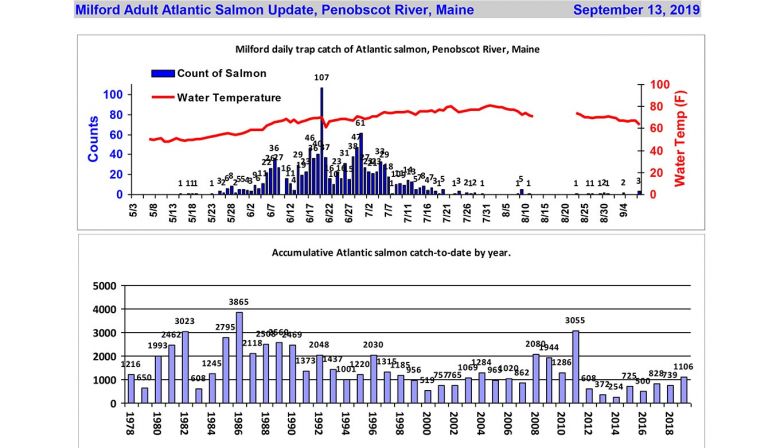 Sept. 13 count of Atlantic salmon at the Milford Fish Lift on Maine's Penobscot River
Penobscot
Jason Valliere, Biologist with the Maine Department of Marine Resources, says:
We have captured 9 new fish at the Milford lift since the last update! That brings Milford captures up to 1106, plus 38 at Orono in the Stillwater branch for a total estimated return to the Penobscot now 1,144 salmon. 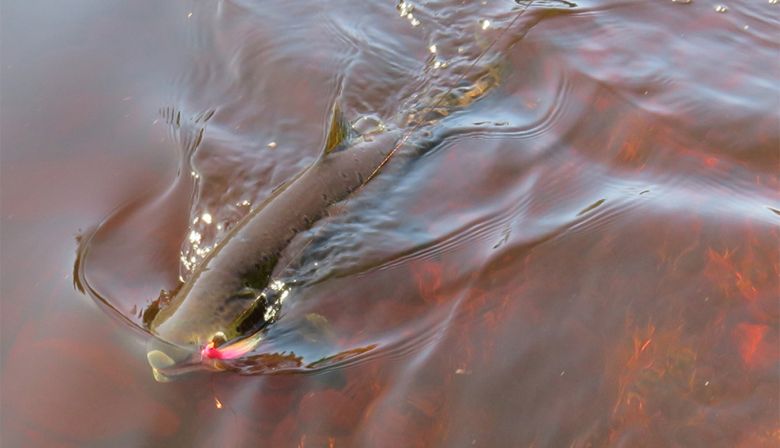 The beautiful, almost opalescent water of the lower Cains on Sept. 10, 2019, as a grilse is gently brought in to be released. Photo Sylvie Malo-Clark 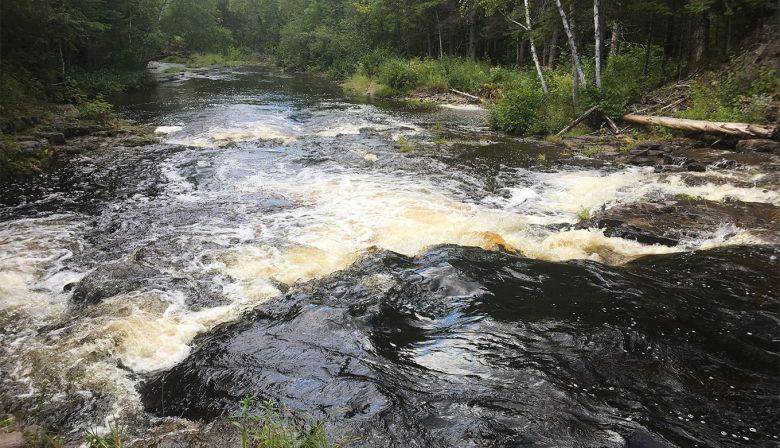 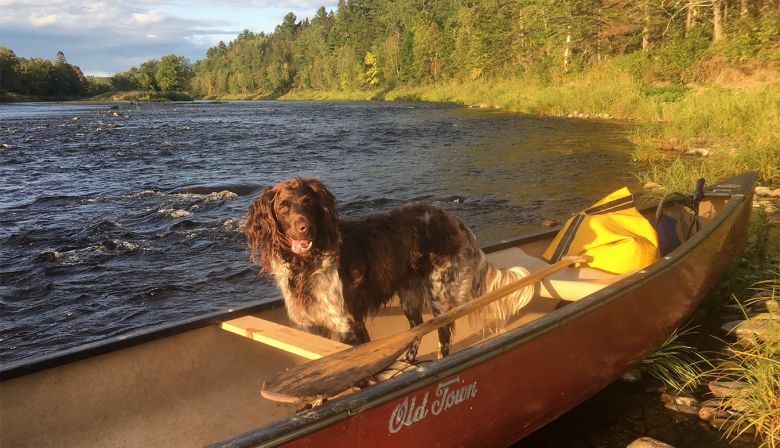 Not all friends that share a river and a canoe are human. On a recent September day on the Nashwaak. Nathan Wilbur/ASF
Jacquet River
To Sept. 15 there have been 24 large salmon and 32 grilse at the counting fence, compared with just 3 large salmon and 52 grilse to the same date in 2018. 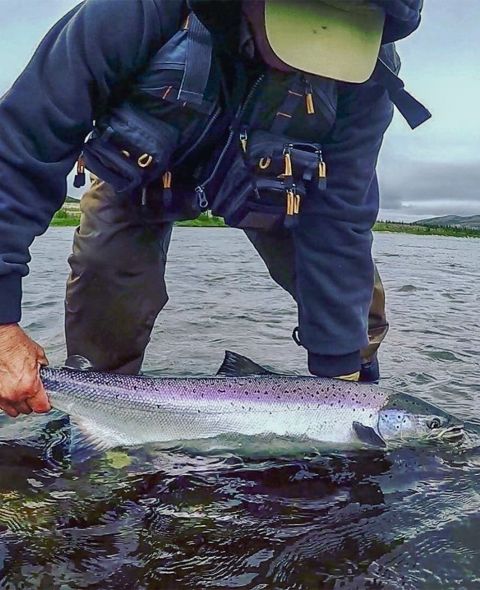 Releasing an Atlantic salmon back into the George River, one of Ungava Bay's great Atlantic salmon rivers. Photo Wedge Hills Lodge
NOTE: The data used for the Quebec river notes are sourced from various river websites, social media and Quebec government sources. Information can change without prior notification.

The Ungava Bay rivers are wild and beautiful. Just above the 57th parallel north, in Quebec's Inuit region, Nunavik, sits Wedge Hill Inn on the George River. Amanda Kat and Richard Hume report their season had been slow early due to very high water, but the action picked up considerably as the season developed. 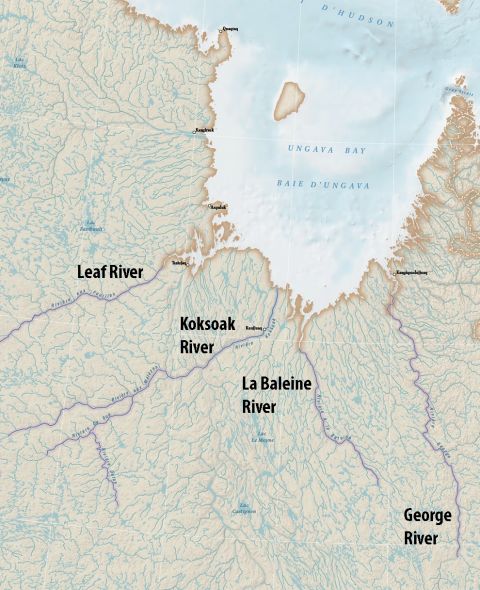 The great Atlantic salmon rivers of Ungava - the George, La Baleine, Koksoak, and Leaf - are accessible to anglers during August and September. They all offer exceptional wilderness experience. 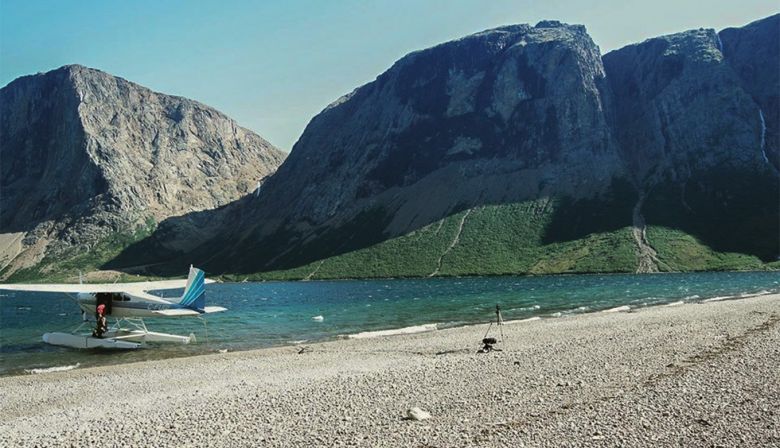 Floatplanes are the necessary taxi transportation to these road-inaccessible river. Photo Wedge-Hills Lodge
Gaspe Rivers
The rivers of the Gaspé received lots of water from Hurricane Dorian, turning on the salmon migration. Those on the rivers have reported some of the best angling this season to date.

Darlene Sexton, Manager of the Cascapedia Society, reports decent results for the month of August in spite of the difficult conditions. 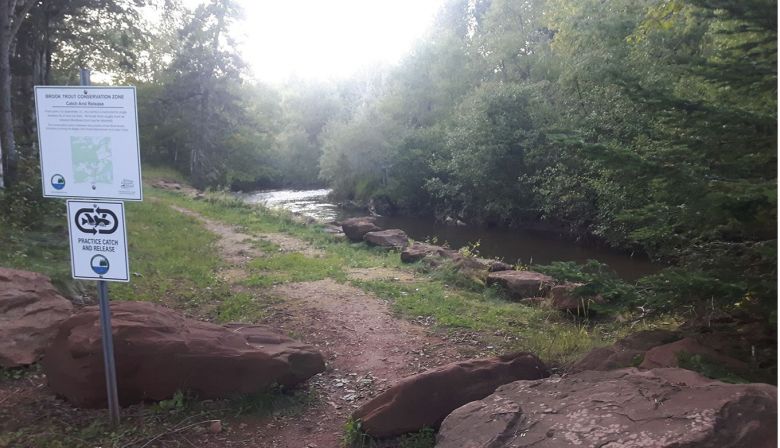 Last day of the angling season for the "Brook Trout Conservation Zone" on the West River. Photo Taylor Main.
Taylor Main writes:
Our regular trout fishing season ended on Sunday and we are now into the extended angling season for Atlantic salmon and rainbow trout.
It's by far the best time of year to be on the water so get out while you can!
Water levels are at a nice level. However, higher water is needed to give optimal fishing conditions. The water is still crystal clear on almost all our rivers and some colour would also help with things.
Temperature issues are also well behind us with the cool days and nights. I keep hearing about the odd fish being picked up here and there but the main run certainly isn't in yet and won't be for at least a couple of weeks. 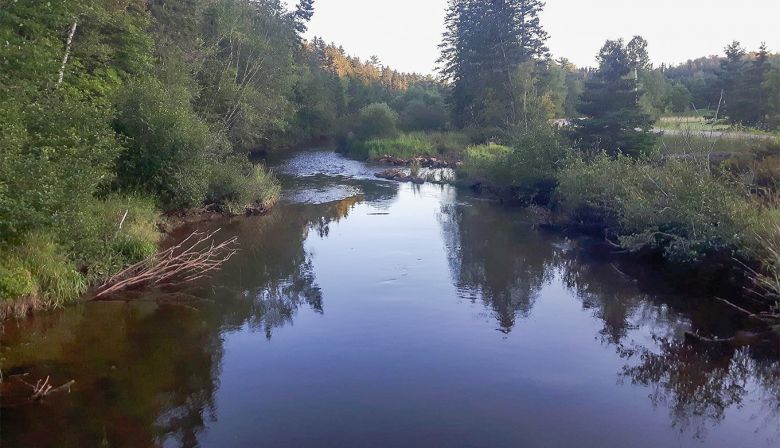 A view downstream from the upper limit of the extended angling season zone on the West River. Photo Taylor Main. 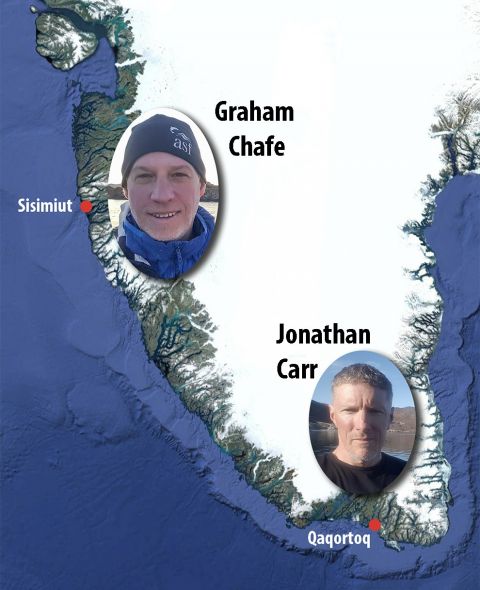 ASF Biologists Jonathan Carr in Qaqortoq and Graham Chafe in Sisimiut are beginning their tracking research.
ASF's Jonathan Carr and Graham Chafe are now in Greenland, beginning their project to tag 50 Atlantic salmon to follow their progress back towards home rivers. Jonathan Carr is located in Qaqortoq in southwest Greenland, while Graham Chafe is in Sisimiut, 820 km. north, opposite the Pangnirtung Peninsula in Canada's Baffin Island.
More reports will be coming in the weeks ahead as the research progresses to attach satellite pop-off tags on adult Atlantic salmon.