"RiverNotes Light" in a time of vacations

Many of us are talking a few days vacation at this point, either sticking close to home, or in the case of some, out on the rivers.

The travel situation is changing for some. As of Friday, July 3, the Atlantic Provinces are joining into a single "bubble", if that is the right word, allowing greater freedom of travel for those within the region, but only those within the region. Now a passionate salmon river person can leave a home perhaps in Halifax region, Nova Scotia and travel to the Miramichi to connect with a wild Atlantic salmon.

The international boundary between Canada and the U.S.A. remains almost entirely closed, understandably frustrating many wanting to visit their favourite salmon streams or to explore a new one. But especially with infection rates increasing in the U.S., there is now talk of the border remaining closed into 2021.

For those in Ontario and western Canada, the situation is not much different. Plus adding to the challenges, Air Canada has just removed many flights entering and leaving the Atlantic Provinces.

As to the Atlantic salmon themselves, overall the word is that 2020 is still noteworthy for Atlantic salmon entering the rivers even in the warm water conditions we have been experiencing.

Despite extremely warm temperatures salmon keep coming. On 21 June we opened the gates at Milford for free passage due to high temperature and reverted to video counts. Counts over the last week have not been adjusted for in-season recaptures based on PIT Tag, Radio Tag, or proration. Counts will be adjusted as data become available.

Finally the long promised, much needed rain has arrived. Temperatures rose quickly on the lower Kennebec River this past week – exceeding 24.5 degrees Celsius. The fishway was minimally tended during the period of high temperatures. Again, flows are very low on the mainstem Kennebec. According to the USGS gauge in Sidney, current flow conditions are at 2,230 cfs, which is the lowest discharge recorded for this date based on 34 years of data.

The river herring catches have ceased at Benton and Lockwood; however, shad are continuing to come into Lockwood. The Atlantic Salmon run has slowed noticeably with the increasing temperatures this past week.

Returns of Atlantic salmon to 29 June on the Kennebec River. This year's 48 salmon is the highest of the entire series.

The Sandy River, where Atlantic salmon are released to find spawning areas, on 1 July 2020. Maranda Nemeth/ASF 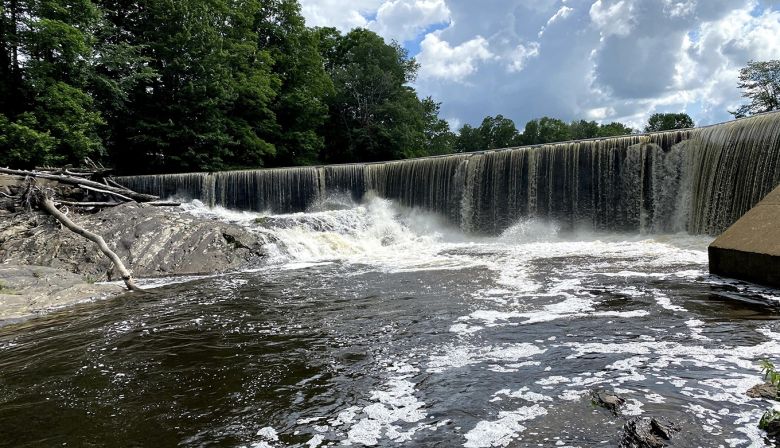 Although we got rain yesterday and last night, it did not translate into a bump in water levels in the Margaree River.

I took a trip around the lower part of the river and never saw so many salmon fishermen for this time of year, but I am not fishing myself.

Water levels are higher than normal and fishing has been excellent with 200 plus fish hooked daily.There has been many fished hooked in the 10 lb plus size range.

The counting fence information for the Northwest Miramichi is showing it having far stronger returns of Atlantic salmon this year than in other recent times.
Miramichi

The Northwest Miramichi numbers in 2020 are a great improvement, but this is just one year, unfortunately. The problems of striped bass predation and mortality at sea need to be decline before we will see consistent better returns.

The Dungarvon counting fence, a measuring stick for the Southwest Miramichi,  did not have any good news to late June.  There was a slight increase of grilse to 7 compared with 4 last year, and a significant decline in large salmon, with 11 this year, and 26 last year, to June 28.

In the Gaspé rivers the flows have been dropping quickly, as shown by this graph of the Bonaventure. But significant rain events north of the St. Lawrence have helped raise water levels on rivers like the Ste-Anne.

Photo about 10 days ago on the Matapedia River. Photo Christopher Minkoff.