Borders and the Pandemic 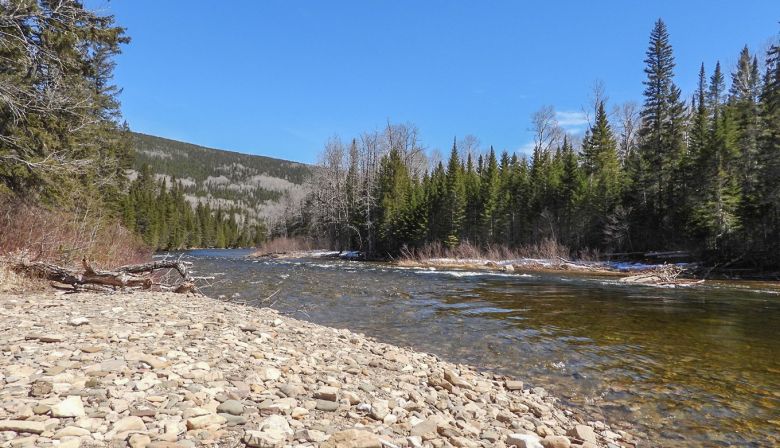 Keg Pool on the York River, Gaspé, on May 15, 2020. Photo Quebec Sporting
Canada and the U.S. have agreed for the border to remain closed until at least June 21, when the situation will be reevaluated. In Canada, interprovincial and even intra-provincial boundaries remain in place, limiting access to places away from home.

Provincial governments in Atlantic Canada have expressed a strong desire to maintain control of their borders to prevent coronavirus from entering a region with only a handful of active cases of Covid-19. In Quebec, travel is restricted between regions. A resident of Gatineau could not visit the Gaspé or North Shore of the St. Lawrence.

The renormalization of interprovincial and international travel will be a decision made at the highest levels of government, and negotiated between countries. So far, decision makers have leaned toward an abundance of precaution.

That's the situation in North America. In Norway, the national government has ordered Norwegians to stay in the country and foreigners not to visit until August. In Iceland, the picture is different. The country is preparing to welcome foreign travellers beginning June 15th. Check out details on the international situation below. 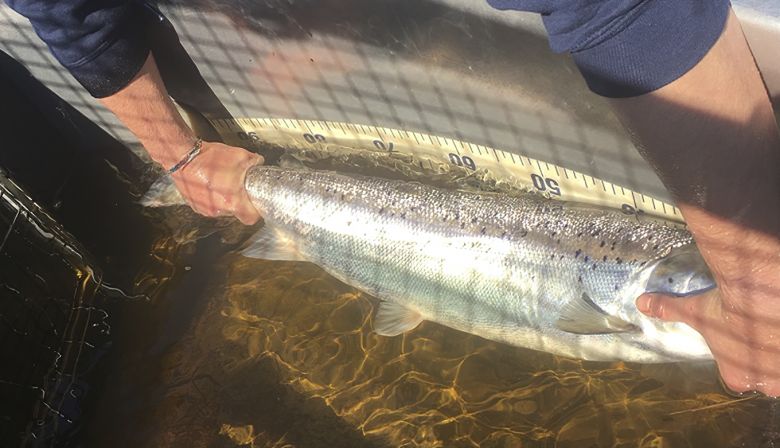 We are getting off to a slow start for 2020. River temperature remains low and flows are still high. We have passed just under 13,000 river herring thus far.

We captured our first Atlantic salmon on May 13. It was a 2 sea-winter 80cm male that was stocked as a smolt in 2018. 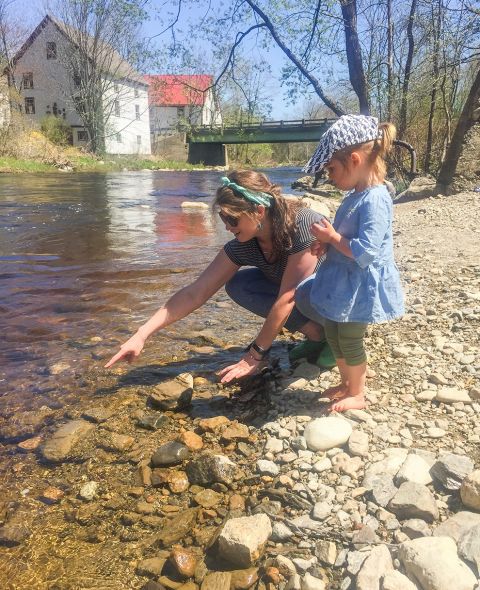 Molly Payne-Wynn and her daughter, Clara observe small eels in the Sheepscot River near the site of the former Head Tide Dam, which was partially removed in 2019 to allow migratory fish upriver. Molly is a Senior Freshwater Scientist with The Nature Conservancy, a partner with ASF in the Head Tide project. Photo Credit: Shri Verill/Midcoast Conservancy.
Sheepscot

Reports from the field describe alewife running well inland on the Sheepscot River, past the former Head Tide Dam, partially removed in 2019, and the Coopers Mills Dam, completely removed in 2018. At both sites, ASF, the Midcoast Conservancy, and The Nature Conservancy worked with local communities to return free flow to the river and beautify the surrounding area.

The Sheepscot is the southernmost U.S. river where Atlantic salmon consistently return and spawn in the wild, despite most headwater habitat being blocked by dams for more than two centuries. It is one of seven rivers in the Gulf of Maine with genetically unique Atlantic salmon.

We are currently working on restoring access for migratory fish at two other sites in the Sheepscot watershed; at the Branch Pond Dam and into Sheepscot Pond, significant steps to helping our federal partners achieve the goals of the Recovery Plan for Gulf of Maine Atlantic Salmon. 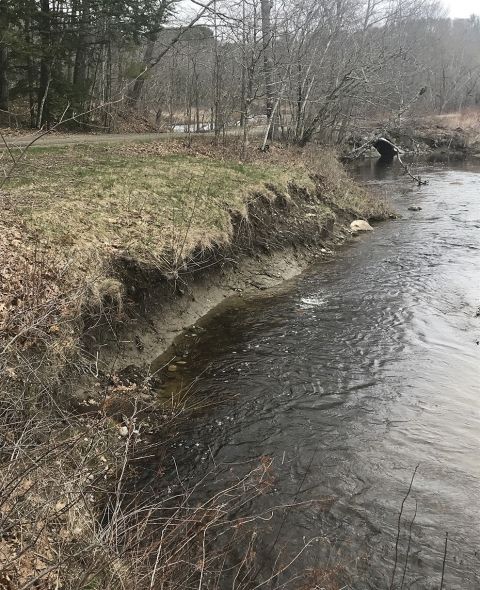 This undersized culvert in the Sheepscot watershed, below the former Head Tide Dam will be replaced through a joint ASF, Midcoast Conservancy, and Nature Conservancy project. Photo Shri Verrill 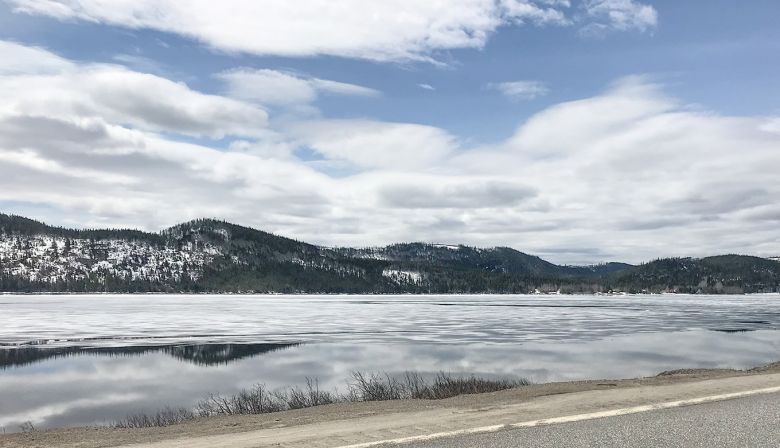 Pinchgut Lake in the headwaters of the Harry's River, western Newfoundland, was partly ice-covered on May 17. Photo Don Ivany/ASF
The Newfoundland and Labrador Angler's Guide for the 2020 season was just published: http://www.nfl.dfo-mpo.gc.ca/NL/AG/anglersguide

This is a document put out annually by Fisheries and Oceans Canada which outlines the rules for trout and salmon angling in the coastal and inland waters of Newfoundland and Labrador. 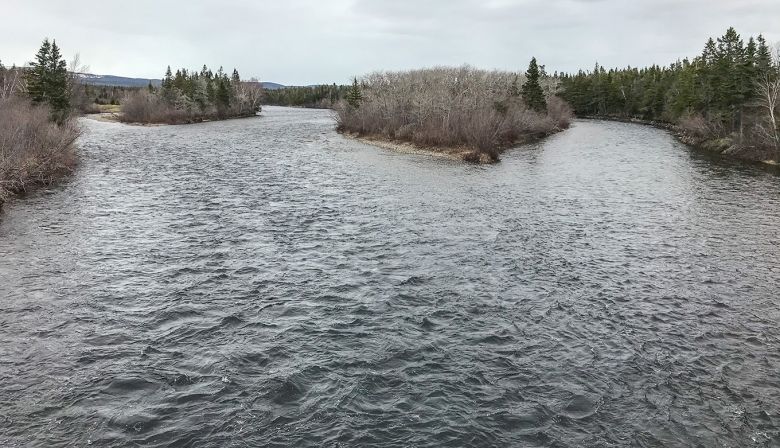 The Harry's River was running full as seen from Highway 460 near the Dhoon Lodge outside Stephenville, Newfoundland. Don Ivany/ASF
Don Ivany, ASF Director of Programs for Newfoundland and Labrador, recently inspected some of the rivers down toward the Bay St. George and Stephenville area of western Newfoundland. Water remains cold and flow levels high. 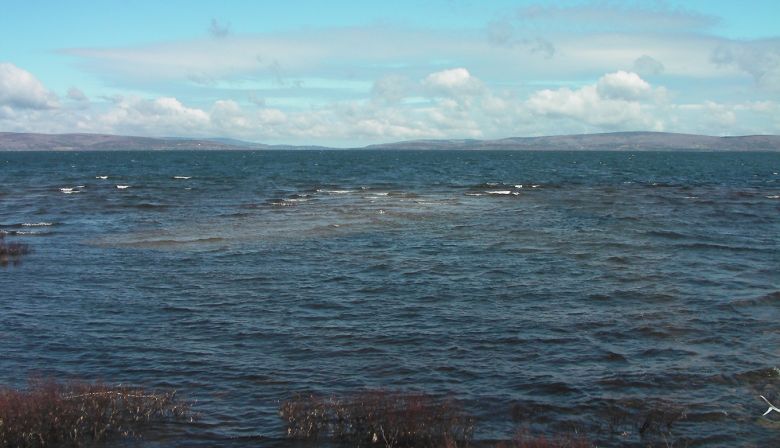 Lake Ainslie, which forms the headwaters of the Southwest Branch of the Margaree River, photographed this week. Photo Greg Lovely
Margaree

Greg Lovely, who has been on the river in the past few days reports:

"I am just back from a little trout fishing on the Margaree River. Water levels are good and there are some beautiful trout starting to feed on mayflies. Air and water temperatures in the Margaree remain very cold. Today's air temperature is 7C.

"I was by Lake Ainslie on the Southwest Branch of the Margaree. More than a decade ago, invasive smallmouth bass were illegally dumped into this lake and because the lake is so big, Inland Fisheries of Nova scotia and DFO gave up on any attempts to control or eradicate this invasive species.

"In the Margaree, it has been shown that the smolt migration does not really get going until the first week of June, when the water temperatures have warmed to around 10 C."

The NB government just released an update on the rules for the use of Crown Reserve waters, prime salmon and trout stretches open to residents through an annual draw. Here's the text of the message sent to anglers this morning:

Crown Reserve angling will proceed this summer with some changes due to the COVID-19 pandemic in an effort to keep New Brunswickers safe.

Successful applicants will still have the opportunity to enjoy these prime angling waters, however the camps will be closed on the stretches that have accommodations. Anglers will need to make alternate plans to either camp outdoors on the property or commute.

Physical distancing measures will be in place for Crown Reserve fishing. Party members outside of their two family bubble will need to travel and camp separately.

Please note, if payment is not made by May 29, 2020, your stretch date will automatically be put back in the pool of available dates.

Please respond to this email by letting the department know if you still plan on going on your Crown Reserve trip. Payments can be made by credit card on the Crown Reserve portal at:

Alewives surging in the North Branch of the Oromocto River

Check out this video submitted by ASF's Director of Programs for N.B., Nathan Wilbur, filmed last weekend on the North Branch of the Oromocto River, a tributary of the lower St. John River. High water levels have allowed healthy numbers of fish to pass an aggressive lobster bait fishery targeting alewives in the estuary of Oromocto.
Miramichi

"The tributaries here on the Miramichi are in great shape for canoeing. Quite a few people are enjoying the backcountry in their canoes and kayaks while river levels are good.

"There are still a few salmon kelts hanging around below Blackville in the Quarryville area. Good numbers are still being brought in and released. Enough to keep many local salmon fisherman happy. Striped Bass are being fished just below Quarryville near Doyles Brook and have been spotted in Quarryville.

"Lots of comments from anglers coming through the tackle shop that the warmer forecast this week will bring better angling conditions." 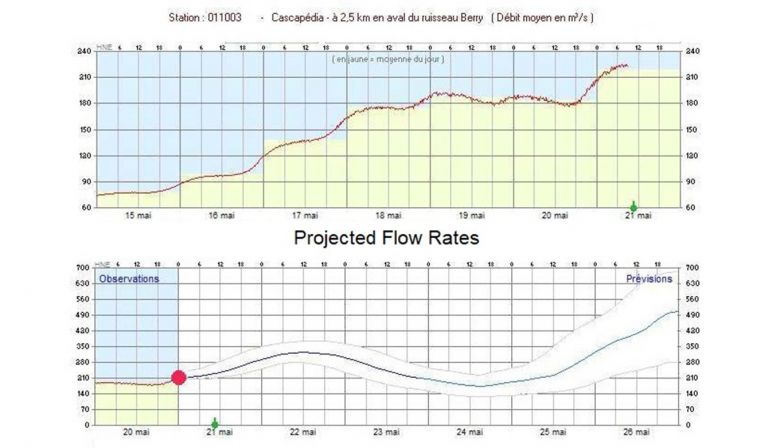 The Cascapedia River is flowing at good levels, stabilizing after the spring runoff period.
Charles Cusson, ASF Director of Programs for Quebec notes:

On May 25 angling will start on the York, Dartmouth, and Saint-Jean rivers in Gaspé and the Moisie on the North Shore of the St. Lawrence.

"River levels in the lower St. Lawrence and Gaspé seem to have stabilized around normal for this time of year. On the North Shore it will be another 7 to 10 days before peak flows are reached." 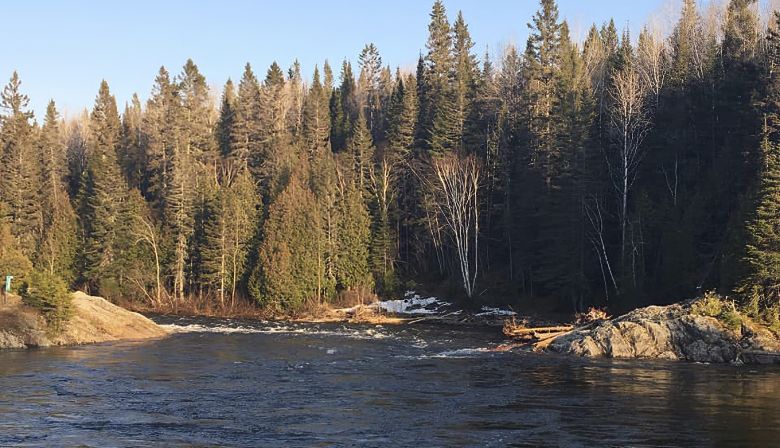 "For the time being, residents of Quebec will be permitted to travel to their favorite rivers if it is within their region of residence. Only daily angling is permitted with the obligation to return home at the end of the day.

Anglers from other provinces within Canada will have to be patient and U.S. residents will have to wait until at least June 21st for further details regarding international travel." 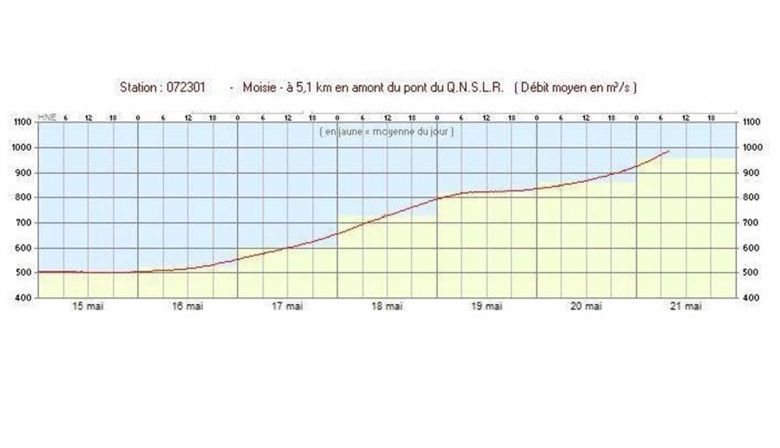 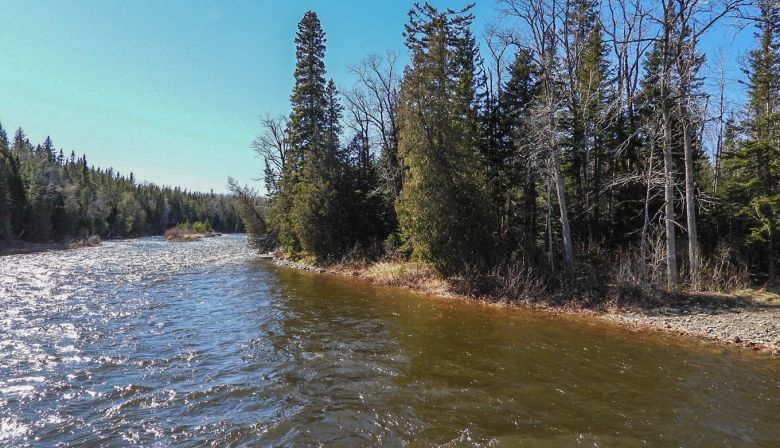 York River, just above Baillargeon Bridge on May 19. Photo Quebec Sporting
Details on the Quebec season so far...

The collection of data performed via fish ladders, counting fences and in-river counts will be performed as usual.

Resource protection and enforcement will be in place with the presence of accredited provincial conservation officers and local auxiliary conservation representatives. Private camp and outfitters that will not be open for business will have guardians in place during the season.

Registration of releases and catches will be done on-line, coordinated local ZEC offices. Theses processes should be operational by June 1st.

The FQSA (Fédération québécoise pour le saumon atlantique) has put in place a committee that is preparing health and safety protocols for consideration to the Quebec government. The proposed protocols would address issues such as: 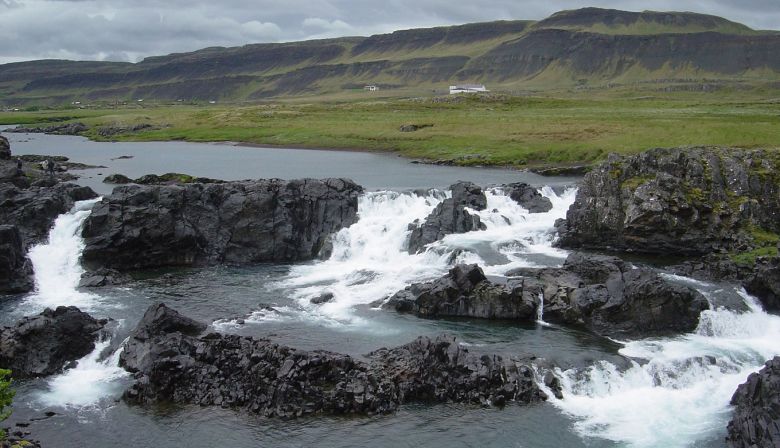 The details are contained on this Iceland government webpage:

Visitors have three options - 14-day quarantine, a certificate they are clear of Covid-19, or testing at the airport upon arrival.

Lax-A Angling Club quickly picked up on this:

One difficulty is certainly air travel to and from Iceland with few scheduled flights at the moment.

Thomas Mahnke with a 10 kg. Atlantic salmon on the Gaula River from July 2019. Photo courtesy Per Arneberg, Norwegian Flyfishers Club
Norway has locked out international travellers to this point.

Per Arneberg of the Norwegian Flyfishers Club sent these notes:

"As of May 15th, 2020, the Norwegian government has come out with the following regulations:
"This means that most anglers coming from the US will, at present, not be able to enter into Norway until August 20th.

"While this is subject to change, at least as far as our lodge on the Gaula, the Norwegian Flyfishers Club, we are contacting all of our US/Canadian guests to offer the same week of fishing, at the same price in 2021,

"Or if not suitable, a full refund of their deposit.

"We will for the time being, not be opening up the NFC lodge, but offering fishing to Norwegian fishermen with self-catered accommodation in farm houses.

"We know that the same is being offered from most outfits/lodges on the Gaula and Orkla, as well as many other rivers in Norway. We have not officially heard what ALI is doing in regards to the Alta syndicate weeks, so we cannot comment on that." 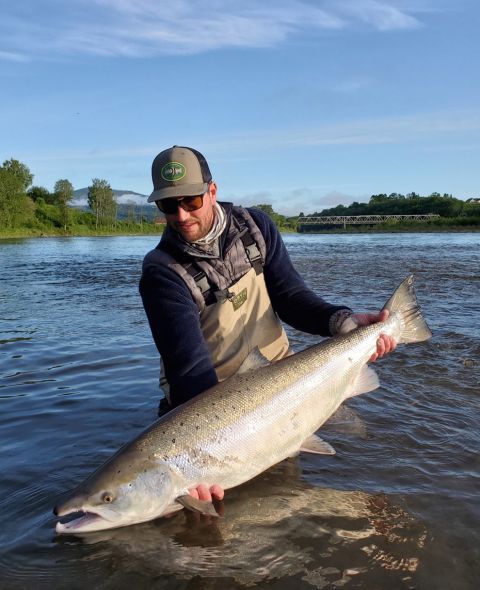 "That being said, there is a chance, pending an improved situation in regards to the Corona pandemic and its containment, that Norway opens up to U.S. and Canadian anglers earlier than August 20th.

"If that is the case, we will reconsider to open the NFC lodge, and offer special deals, packages, and tailor made solutions to anyone interested in coming from the US or other international destinations.

"In regards to the fishing, with one of the largest snowpacks in mid-Norway for the last 10+ years, and with snow still on the ground in the valley, and low temps, the spring flooding has not even begun to commence.

"This is a perfect scenario for the Gaula, which is one of the last unregulated salmon rivers in Norway. This snow pack will most likely sustain the water levels well into July, and with some rain, we should have ideal water levels throughout the season.

"In terms of fish returns, following the last two seasons with good amounts of medium sized salmon in the 12-20lb. range, and quite a few in the 20-30lb. range, and even a few large MSW salmon over 40 lbs. we are expecting a good run of MSW salmon this season.

"This coupled with the advantageous weather/snow conditions, we expect, (unfortunately for foreign anglers who will miss it), a quite fruitful season with a strong return of fish."