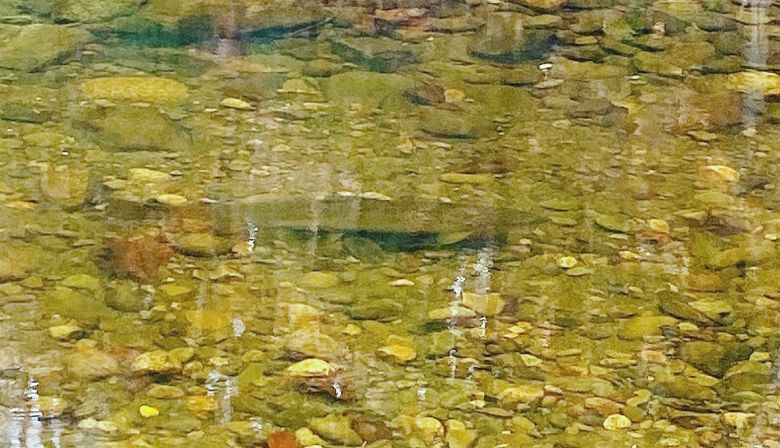 A large female salmon prepares to dig a redd in the Sandy River, Maine. Photo Cassidy Bigos, Maine DMR
The Sandy River is cold, clear, and contains some of the best Atlantic salmon habitat in the state of Maine. Unfortunately, adults returning to the Kennebec River tributary are completely blocked by dams. The state runs a truck and trap operation at Waterville to keep this distinct, wild population alive, and the fish are responding.

Cassidy Bigos, a biologist with Maine's Department of Marine Resources has begun a survey of salmon redds in the Sandy, and after several days of rain, Bigos reports that the spawn is on.

The 51 Atlantic salmon that made it to the dam at Waterville this year were trucked up to the excellent spawning areas to be found in the Sandy River. After surviving the heat, they are now enjoying cooler, more oxygenated conditions and the hormones of the fall spawning have kicked in.

First redd spotted this season in the Sandy River. Cassidy Bigos/Maine DMR
The redd, a nest for eggs, will be dug down as much as 45 cm (18 in), with the female then laying thousands of eggs in the gravel, fertilized by one or more large males, or precocious parr - tiny salmon that have put all their energy into becoming sexually mature rather than growing large and migrating to far ocean feeding grounds.

Once fertilized, the female uses strong tail-beats in the water to move gravels back over the eggs, protecting them as they develop through the remainder of the late autumn and winter months.

Generally the spawning activity takes place with water temperatures of 4.5 C to 10 C.

The Sandy River is located southeast of Rangely Lake and has excellent Atlantic salmon spawning habitat.

Water conditions throughout much of Maine have improved in time for spawning season. This photo was taken Monday, Oct. 19 on the Temple Stream, a tributary of the Sandy River Maranda Nemeth/ASF
Maranda Nemeth, ASF's Maine Headwaters Project Manager, writes:

Overall, the several inches of rain this week have finally brought river levels closer to a seasonal average.

Jen Noll from DMR notes that the water temperatures are dropping, and combined with the rain fall and higher water levels, it’s starting to be ripe conditions for spawning.

The rains arrived at a very critical time, allowing fish to finally move about.

DMR has started to assess for early signs of salmon spawning along the Sandy River and located the first redd recorded for this year earlier this week in the Sandy.

Jen and Cassidy have documented a few test pits and observed several adults, including a female likely prior to laying eggs within a redd. DMR will assess for spawning of Atlantic salmon over the next several weeks throughout Maine.
Sheepscot River

A view of the former Coopers Mills Dam site, which was completely removed in 2018. Photo Herb Hartman

Looking upstream from the Head Tide Dam which was partially removed in 2019. Water levels have risen, but more rain would be appreciated. Photo Herb Hartman
Maine's Downeast Rivers

AT LAST! Finally a couple days of rain and with the deluge came new Atlantic salmon captures!

Water temperature has declined to around 11 C and discharge increased to more than 300 CFS for the first time since spring.

Six multi-seawinter salmon, made up of five females and a single male, have been captured since 15 Oct.. The adult trap will be removed for the season on Fri, 30 Oct.

A hot take on North American salmon returns in 2020

Overall, the salmon runs this year were stronger than in 2019, and perhaps as good as any year since 2011. The official estimates will arrive in the months to come, but angler reports and the real-time information from assessment facilities are both positive.

We saw encouraging signs early in the season as salmon began showing up in force at the Milford Dam on the Penobscot where they are counted. As of Oct 12, 1,464 adults had returned to the river. Indeed, the most since 2011 and a huge improvement over 2014 when only 248 were counted. The ASF-led dam removals and habitat restoration projects throughout the Penobscot watershed are having a significant positive effect, not just on Atlantic salmon recovery, but the entire Penobscot ecosystem.

Anglers had notable success on the Miramichi, Restigouche, and their tributaries, even though low water and warm weather persisted throughout much of the summer. In Quebec, on rivers like the Matane, numbers are the best in five years. In fact, catch data on most Gaspé rivers show improved angler success over last year.

In Newfoundland and Labrador, COVID-19 affected the timing of installation of many assessment facilities, so the DFO numbers to date are not reflective of the sampling period from previous years. Things generally look good, but we await analysis from DFO.

All this seems to suggest that sea survival has improved, at least temporarily. The multi-sea winter salmon returning to North America this year are only the second cohort afforded protection from the current Greenland Salmon Conservation Agreement brokered by ASF, NASF, KNAPK and the Greenland Government. Nevertheless it is a very positive sign. As with past Greenland agreements we expect returns of large spawners to grow and compound throughout the life of the deal.

Take action to stop invasive species in the Miramichi watershed! Partners in the proposed 2021 smallmouth bass eradication have launched a letter writing campaign, asking people to show support for the project at this crucial time. So far more than 1,100 people have added their voice.

If you haven't already, take one minute and visit: https://www.miramichismallmouth.com/take-action

After hitting send, explore our project website to learn more about the critical and complex conservation action.

Leaving the Bridge Pool and headed down river on the Dungarvon, October 8th, 2020. Photo Neville Crabbe/ASF
Neville Crabbe of ASF fished the fall stretch of the Dungarvon earlier this month, from Furlong Bridge to the Renous Forks:

In the final days of the salmon angling season on the Miramichi, an Atlantic bubble friend from Nova Scotia joined me to explore a place we talked about years ago, the Dungarvon River. We were university roommates, Nick Fraughton and I, but it had been a few years of raising kids and stick-handling careers since we were together.

After a hotel night in Moncton, we met Brock Curtis of Curtis Miramichi Outfitters in Blackville. He helped us drop off a car and shuttled us to Furlong Bridge. It was darn windy and a little cold but our excitement was enough to warm the belly.

We had a canoe and packed light in anticipation of low water conditions, despite a days rain before we arrived. It was the right choice, even though we hauled the canoe for most of the trip; definitely better than hiking with heavy packs down the rocky river bed.

We spent a few hours at the Bridge Pool, trying to push flied through the wind, and catching up on lost time. From there we pushed down river, camping at Underhill Brook and exploring Salmon Hole, a little ways downriver. When it was too dark to fish we got a fire going tent-side , had a big scoff of spaghetti, and kept our waders on until it was time to crawl into a sleeping bag.

Square Island Pool on the Dungarvon River, a complex, deep run that takes in water flowing around the island. Neville Crabbe/ASF
On day two we managed to float a little bit, saw an enormous bull moose and stopped for lunch at Square Island Pool where I hooked a very bright salmon that popped off as we were readying the net – a perfect no touch release in my books. All the way down we fished hard, despite the wind. I unhooked my friend Nick from his flies and he mine. Still we kept laughing and carried on to our second campsite.

The next morning we hiked to the forks, where the Dungarvon flows into the Renous. We turned a little ways up the Renous and fished. Everything seemed perfect, but nothing was taking. Did it matter, not one bit. The trip was a great time and I look forward to exploring more of the Dungarvon in 2021.

High Bank Pool on the lower Dungarvon is obviously named. Photo Neville Crabbe/ASF
When we were finally packed-up, we hopped in Nick’s Rav 4, cranked the heat and each got a cheeseburger and French fry from Trio Pizza Take Out in Blackville. We drove to the Blackville Municipal Park and sat in the car eating, looking out at the carving of the Dungarvon Whooper and laughing. Must have been a little too windy, even for ghosts, on our trip.

The recent rains have certainly helped the situation in headwater streams of the St. John and Nashwaak. After the summer drought, it is a relief to see the higher flows and dropping temperatures.

The situation remains critical for returns of Atlantic salmon to the St. John River. To Oct. 15 there have only been 340 grilse and 144 large salmon reaching Mactaquac. This is below last year, and well below the 1997-2001 average of 3,079 grilse and 1,227 large salmon. Historically, numbers of returning Atlantic salmon were orders of magnitude larger.

There is no question that the massive Mactaquac Dam as well as other dams have been a major force in destroying this run. There are other associated reasons as well, including increased marine mortality and invasive species, but the dam is a large reason that numbers have not been able to avoid the historically important loss of the runs.

The Nashwaak River on 15 Oct. This year the salmon run counts are not available. Nathan Wilbur/ASF
Magaguadavic River

The runs up rivers like the Nepisiguit and Jacquet have been heavy this month, undoubtedly helped by the recent rains

In the Nepisiguit, the Pabineau First Nation has counted 229 grilse and 113 large salmon as of Oct. 16.

The river could certainly use more rain, with the flow on the Northeast Margaree back down, with the last storm passing through on Oct. 15. Still, the water is now cool enough. Season finishes at end of the month.

Gennadiy Latariya releases a nice salmon on the Margaree about a week ago.
Northumberland Strait Rivers

A decent bump of water after about 40 mm of rainfall moved Atlantic salmon into the tidal pools and dispersed some throughout the West River.

The regular West River anglers showed up in good numbers and it finally felt like salmon season again. This past weekend would have been our Dinner and Auction but in COVID-19 times everything is different so it was nice to be on the river seeing familiar face and a touch of normalcy returned.

As we enter into the home stretch of the season there appears to be a number of grilse in the river but fewer multi sea winter salmon have been taken up until this point.

Most have given up any hope for higher water with no meaningful rain in the long range forecast. Similar to other fall rivers our MSW fish tend to come up after the grilse run so everyone remains optimistic of their chances of hooking into something larger.