Climate Change and the Future of Wild Atlantic salmon

Few truly comprehend the full impact of climate change, but we are up against it and it is a tough one to fight. We are faced with a status quo that cannot continue, and indeed humanity and our culture are at stake.

But for those on the water or involved with Atlantic salmon, the evidence of climate change is already affecting us. It is summer low water. It is high stream temperatures that jeopardize fry and parr survival. It is punishment to the lives of Atlantic salmon from clear cutting and the continued changes resulting from acid rain. It is changes to the food web at sea that turns past feeding grounds into marine deserts, yet offers other possibilities - but possibilities to which we are not sure Atlantic salmon are capable of adapting.

That is why the COP26 Climate Change meeting of nations in Glasgow is important to us all. That is why it is important to Atlantic salmon. We cannot continue on our present course. But can politicians get past inertia, potential hits at the polls, and the greed of so many? We need to back up change in any way we can. Time is not on our side, is it?

Meanwhile, we have had some warm weather this month, and a lead up to the Atlantic salmon's spawning season in headwaters throughout salmon rivers on both sides of the North Atlantic.

East River Pictou counting fence part way through its re-installation, on 20 Oct. 2021. Confederacy of Mainland Mi’kmaq installed the fence as part of an effort to develop a better estimate of Atlantic salmon populations on Nova Scotia’s northern shore and develop restoration plans. Unfortunately the first fence washed out in high water, so it is being reinstalled hopefully in time to capture this year’s Atlantic salmon run. Kris Hunter/ASF
Northumberland Strait Rivers

Water levels are starting to rise and Atlantic salmon along Nova Scotia's northern shore are beginning their fall runs.

While water levels have started to rise to the normal fall levels, water temperatures, especially in the estuaries, still remain slightly higher than normal.

A measurement in Antigonish the other day had the estuary at 16 C. and the river at 14 C. This temperature differential, or lack there-of, suggests that we are likely still a few weeks away from the peak.

Despite this, fresh Atlantic salmon are certainly starting to come in.

Reports from River Phillip and the Waugh River are that fishermen are starting to land grilse and large salmon but not yet in the numbers that are expected.

This is echoed in Pictou and Antigonish where people are reporting numerous Atlantic salmon jumping in the estuaries. But as of this week, only a few have entered into fresh water.

Beautiful weather, but it would be nice to have more rain. At the Dollar Pool this week. Photo Patrick Poirier
Margaree

Margaree water levels rise, then drop just as fast. There are a few fish being hooked, with fresh salmon arriving. Showers are likely for most of the weekend and early next week and that could help. It should be good fishing until the season closes, but nothing is certain in the Atlantic salmon's world.

Tent Pool on the Margaree, with sun striking the autumn foliage. A beautiful place to be, whether human or Atlantic salmon. Photo Patrick Poirier

Middle River as well as Baddeck River are boasting some good numbers of fish. With recent rains, the main push of Atlantic salmon has begun.

Angler on the Baddeck River in Cape Breton on 18 Oct. 2021. Tom Cheney/ASF

Another high view of the Middle River showing the height of autumn colour. Obviously more rain would be good. Tom Cheney/ASF

Many observers are commenting on the lateness of the fall runs are this year in Prince Edward Island rivers. Aside from a fish here or there we haven't seen anything that one would consider a fall run. The weather has been beautiful but it has been dry, with Sunday evening's rain largely missing us.

There is the odd fish being hooked now, but certainly no consistent numbers and it doesn't appear to even be a daily occurrence from anyone I've spoken with. Most anglers have now set their sights on "I hope I can at least get one this year" at this point

Reports from some anglers suggest that the Morrell River is closer to seeing the peak of this year's run of salmon. There have been a few more reports of salmon hooked and in the Morrell, the water temperatures have been a little cooler than in some other rivers.

Bartibog River mid-week. Nathan Wilbur/ASF
The angling season has largely ended except for a few rivers in northern New Brunswick, notably the Bartibog, that ends on Oct. 29, and Nepisiguit on Oct. 22, both photographed this week by ASF's Nathan Wilbur, Director of Regional Programs.

Check out the rehabilitation of the banks of Campbell Creek, a tributary of the Nashwaak.

The banks are revegetating nicely at the Campbell Creek dam removal site. With the nice raise in water this October, there very well could be adult salmon moving upstream to spawn for the first time in 100 years. Nathan Wilbur/ASF

The latest counting fence numbers are in, with the Dungarvon Fence, representative of the Southwest Miramichi to Oct. 17 having 106 grilse and 131 large salmon this year, compared with 88 grilse and 70 large salmon in 2020. Numbers moving in the right direction, but a long way to go towards heathy runs.

An Atlantic salmon being brought in for release on the Little Southwest Miramichi on 7 Oct. 2021. Photo Paul Elson
Paul Elson Jr. writes:

I spent the last week roaming the rivers looking for Atlantic salmon, but still finding only one or two per pool.

The fishing slowed to an absolute crawl after Oct. 11 and I had no more hookups and just a few raises.

I still saw salmon daily, but none were interested in taking a fly.

There were still a few fish moving upriver on Oct 14. We had a couple of salmon enter the pool, jump a couple of times at the bottom and then jumped high up in the run; and then they were gone.

Only saw one test redd this year on the Little Southwest Miramichi and none on any other river.
The striped bass are in full frenzy eating mode at the tidal lines on the Northwest Miramichi system and lower river. We finished the year off with a few tight lines on the bass.

Probably this will be the last time I take three weeks off for fishing. I flared up my carpal tunnel syndrome problem so badly that I could only hold a rod for about five minutes at a time.

This "getting old" thing is not great!

Enjoying the sun, the river and the auutumn colours on the Renous. Photo Paul Elson 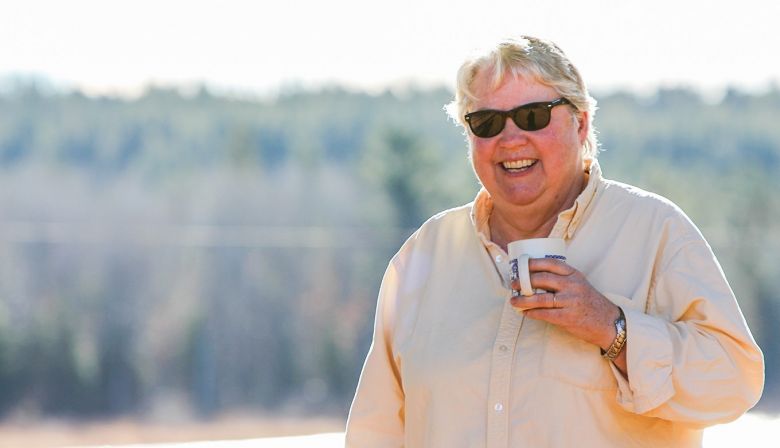 The Hammond River Salmon Association has undertaken many important projects to protect the river's integrity and restore its Atlantic salmon population. The latest is an initiative to stabilize an earthen bank at Crowley's Pool. To read more, click here. 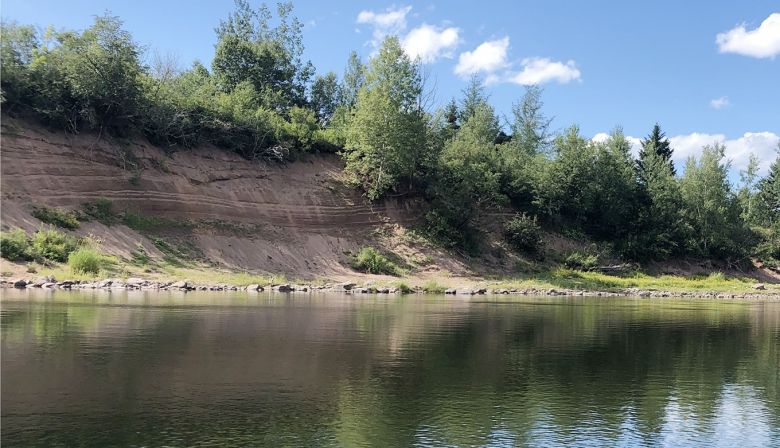 The Crowley's Pool on the Hammond River. Photo Josh Kelly

There were 561 Atlantic salmon counted, so far, at Milford.

Of these, 146 were sent as broodstock to Craig Brook National Fish Hatchery at East Orland, ME. In Valliere's notes, he says there were a few released due to testing positive for ISA, and they had a mortality of two.

The estimated released of Atlantic salmon to the river was 377 as of the first week in October. He also notes the final numbers will go down somewhat, as they have not been adjusted for in-season recaptures in the video counts and related factors.

Glass salmon sculpture designed by Joseph Rossano is in place at the Event Centre in Glasgow, reminding delegates of the importance of salmon and their sensitivity to global warming.
It seem incongruous that the future wellbeing of our world and of the natural world may be determined in a sleek, shiny and very tinny Event Campus. A positive note is that the Clyde River itself is undergoing a restoration. But Glasgow is synonymous with industry at all costs. Now we are sending our politicians there and are attempting to push them to agree this industrial core of our culture needs to stop, to be reversed, and our very future relies on this.

Glasgow Event Campus, on the banks of the Clyde River, where the COP26 gathering of climate leaders is taking place.
Make no mistake that conferences like this one are increasingly taking place at the very time when there must be change. But can the world's political leaders see this over their own self-interest? Stay tuned.