The Atlantic salmon are going about their lives. Humans passionate about Atlantic salmon and their rivers are waiting to see how rules, regulations will impact the recreational angling season and summer plans

Decisions in the Atlantic salmon's world

As of tomorrow recreational fishing is allowed in New Brunswick, and this would include Black Salmon (Kelts). Note that a license is needed. It can be purchased online. Also, rules still apply of maintaining personal distance, etc.

No two jurisdictions in the Atlantic salmon world appear to have quite the same regulations this year.

In France, recreational angling is closed. Norway has closed its borders to foreigners, so rivers like the Alta are off limits. In Ireland salmon angling appears to be allowed in some rivers, but in the Moy and some others it is closed. With more than 16,000 cases of Covid-19, travel is really a non-starter in Ireland, and there are rules about staying near home.

In Scotland, the word is "stay at home", which certainly is good advice. The Atlantic Salmon Trust has put its tracking projects "on hold" with the virus.

In Iceland they are accepting visitors from the European Union, but not North Americans.

Here in North America there is certainly continued uncertainty on seasons and we will continue to let you know the latest news as announcements are made by government.

The Cascapedia River on Apr. 15 shows the sparkling beauty this area is known for. Everyone is waiting to see what will be possible for Atlantic salmon angling this year.
2016-2026 Quebec salmon management plan – 5-year review following the 2020 season.

Members of the FQSA (Fédération québécoise pour le saumon atlantique) met for the first time with representatives of the MFFP (Ministry of Forests, Wildlife and Parks) this week, to ascertain how the government intends to perform the prescribed review.

Of concern to stakeholders in this process is to gage the government’s intent and interest in what input and/or comments if any can be submitted for consideration during the process.

In the meantime, check out this very nice video of the Matane River which will give you hope for 2020.

With restrictions in place surrounding the Covid-19 situation, there will likely be fewer anglers on the water this summer, particularly non-resident anglers with the borders being closed. This means fewer eyes and ears out there to protect salmon against poachers.

In addition to local anglers, camps and outfitters typically provide important oversight on long stretches of salmon rivers with guides and wardens, and serve as a critical deterrent to poachers.

We are encouraging camps and outfitters to explore the various wage subsidies and funding programs available to help ensure that staff are maintained and have a presence on the rivers to help protect salmon this summer.

Here is a link to the myriad of federal government Covid economic relief programs to explore:
https://www.canada.ca/en/department-finance/economic-response-plan.html

When/if fishing seasons open throughout the regions, depending on decisions from public health officials, we encourage local anglers to get out on the water as well. Maintaining a presence in itself will be a significant contribution to salmon conservation this summer.

The renowned salmon pool at the mouth of MacKenzie Brook where it meets the Nashwaak River on Tues., 21 Apr 2020. Nathan Wilbur/ASF 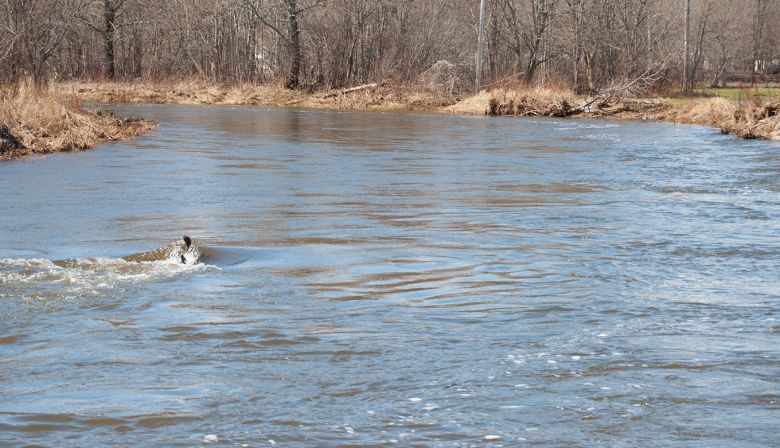 On 16 Apr 2020 the West River Antigonish was flowing with elevated water. Kris Hunter/ASF
If anyone missed the blog of Kris Hunter last week, they should definitely take a few minutes to read it this week!

Hopefully there will be some news on or just before May 1 on the situation regarding the river angling situation.

The Wrights River with slightly elevated flow levels on Apr. 16. This is one of the Antigonish area rivers. Kris Hunter/ASF

The Terra Nova River in Newfoundland with elevated spring water flows. Photo Kevin Stroud
ASF's Don Ivany has a few notes on the present situation in Newfoundland and Labrador:

"ASF has been in contact with the provincial government. They are still planning for a June 1 opening, unless there are further directions from health authorities to delay.

The provincial authorities have received tags and licenses, and these will go out to vendors soon. Any businesses still open, that normally sell licenses, such as gas stations and convenience stores, will be able to provide the tags and licenses."

With the quarantine for out of province travellers remaining in place, we will need to wait and see on the situation regarding non-resident licenses.

The situation remains in fluctuation but concerning for the outfitters in the province, and those relying on the businesses for employment.

"I received an e-mail today from Calvin Francis, Chief of the Gander Bay Indian Band Council.

Calvin lives on the banks of the Gander River near tidal waters, and tells me that the river is high and there are signs of kelt heading out to sea. This is good news.

Maine DMR biologist Mitch Simpson is reporting that the Milford and Orono upstream fish lifts were officially opened for the season yesterday morning, April 22nd. The Penobscot River temperature at Milford was 6.7°C. No fish reported moving through, as of yet.

From a different source, it is noted that the power company personnel are operating the Milford Lift. Also, that no Atlantic salmon broodstock collecting will take place before at least June 12. Until that time the Atlantic salmon will be allowed to swim through and continue upstream.

There will be counting of Atlantic salmon on the Kennebec this year, but the Androscoggin may have a year without data.

There appears to be no chance for smolt wheels to be deployed in Maine in this time of Covid-19.

Milford fish lift at the Milford Dam on the Penobscot. Photo Sarah Bailey/NOAA