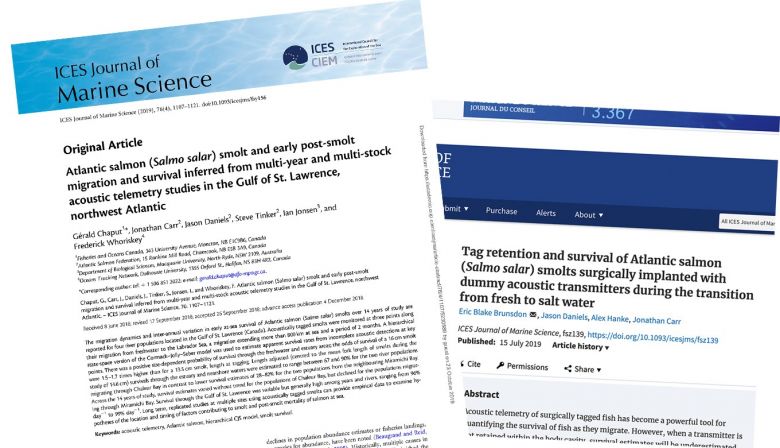 RiverNotes, Atlantic Salmon Journal and ASF's ongoing published scientific research can all be described as "Salmon Stories"
There are so many ways to tell stories about wild Atlantic salmon and at ASF we see them all as being important. ASF RiverNotes focuses on providing timely counts, personal insights, images of the Atlantic salmon rivers and incidental areas of interest. The Atlantic Salmon Journal focuses on in-depth tales of salmon adventures, history, management and photos to deepen the understanding of readers.

The published research from ASF biologists is equally important in telling the tales of Atlantic salmon. These articles in the peer-reviewed literature may appear to be dry reading, but they reveal for the first time important aspects of the lives of Atlantic salmon. Some of the fascinating facts from these scientific papers include the varied routes of Atlantic salmon travelling to Greenland, notes that predators like porbeagle sharks are pursuing and eating North American salmon, and the changing mortality rates of smolts leaving rivers including the Miramichi.

Some of these articles can be downloaded, while others just allow reading of the abstracts. In the past few years the topics have related not just to the migration toward Greenland, but also better understanding of the mortality of Atlantic salmon in estuaries like the Miramichi. These articles include one published in 2017, two more in 2018, three so far in 2019, with more to come this year or next.

Take a few minutes to do a survey of these salmon stories that are so important in understanding this charismatic creature, the Atlantic salmon. 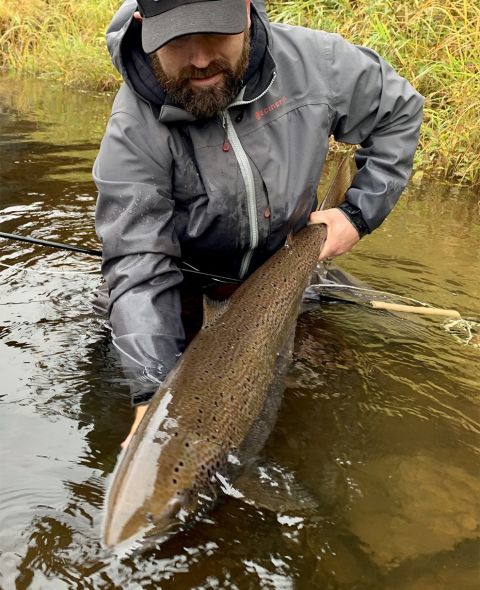 Matt Dort gives some insight into how these rivers:

Earlier in October the Northumberland Strait rivers received a significant amount of rain. Once the water levels settled, they were primed for Atlantic salmon as well as fishers. Fish were reported being caught on the River Phillip, Wallace , West River Pictou , East River New Glasgow , West River Antigonish as well as the Pomquet.

Then a week or so ago, our Northumberland Strait Rivers again settled from 17-35mm of rain over night. Stories of fresh fish being hooked are already being shared. With two weeks remaining in the season, it is nice to see the rivers full of water as well as decent numbers of salmon. 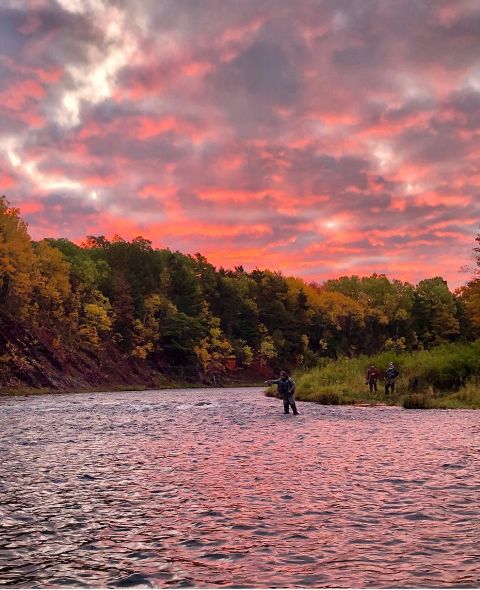 Anglers on the East River early in the morning. Photo Matt Dort 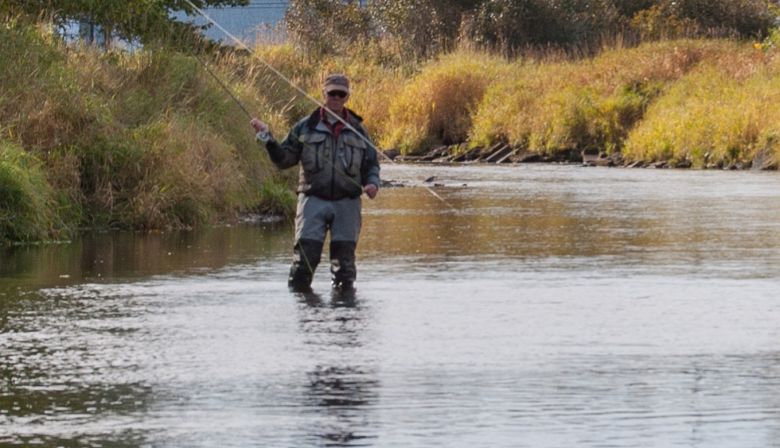 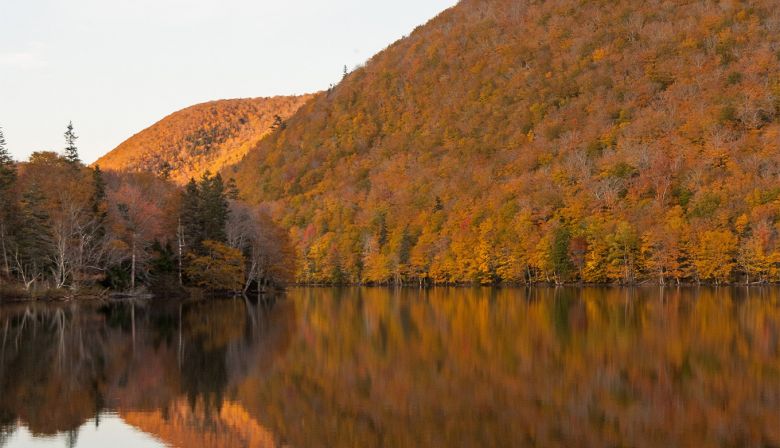 At Lake O'Law on the Margaree the autumn colour was in full array on 16 Oct., 2019. Kris Hunter/ASF
Margaree

The water levels on the Margaree are perfect for fishing, but catching these October beauties is a different story. I did see a nice bright Fall fish today – however there are not too many to be seen.

Atlantic salmon are prepping for the coming spawning season, and I am seeing practice redds in quite a few areas It won't be long until actual spawning is underway.

I made a trip up and down the river today and almost everywhere I stopped to chat, fish were showing and teasing the anglers who were trying to interest them to take their flies.Funny thing – the fishermen did not seem too unhappy. 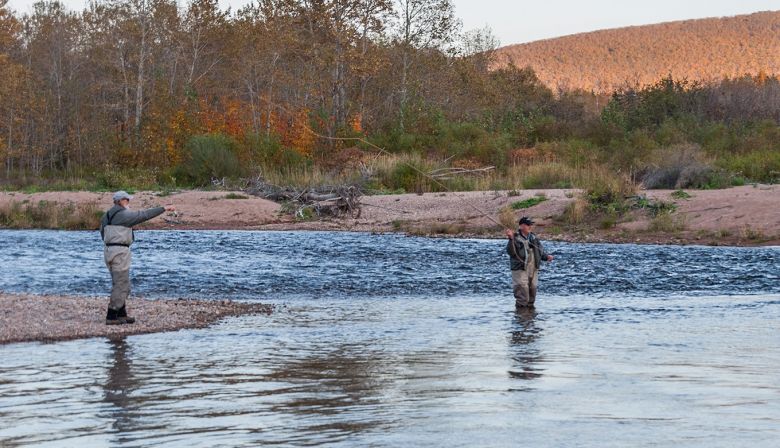 Anglers fishing Brook Pool on the Northeast Branch of the Margaree on 16 Oct. 2019. Kris Hunter/ASF 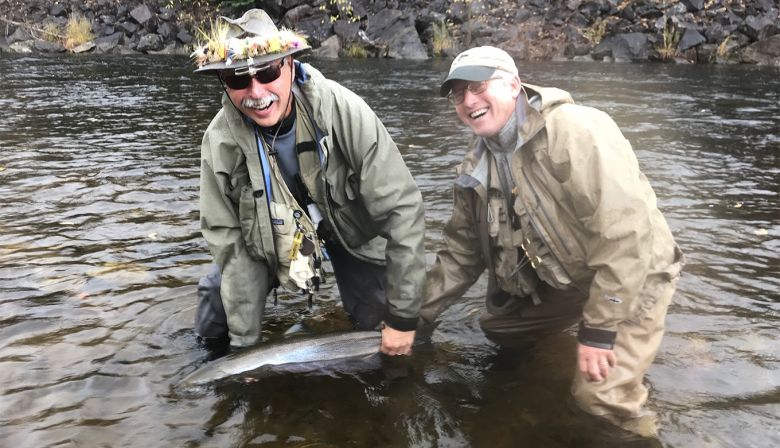 Lewis Hinks releases a fine fall fish on the Middle River, Cape Breton. Incidentally, a few years ago, Lewis's hat was featured in a salmon angling story in the "New York Times". Joining him is René Aucoin of Cheticamp. Lewis is the former ASF Director of Nova Scotia Programs. Photo from Lewis Hinks

Taylor Main has several observations on conditions on the Island.

As we enter the final leg of the season many are optimistic that some fresher fish will start showing up after a week of poor fishing.

A handful of fish were taken during the first two days of this week but prior to that the most recent catches I've caught wind of were taken on the previous Sunday. The majority of the fish that have been taken to date have been grilse or small salmon, with the occasional larger specimen having been taken. 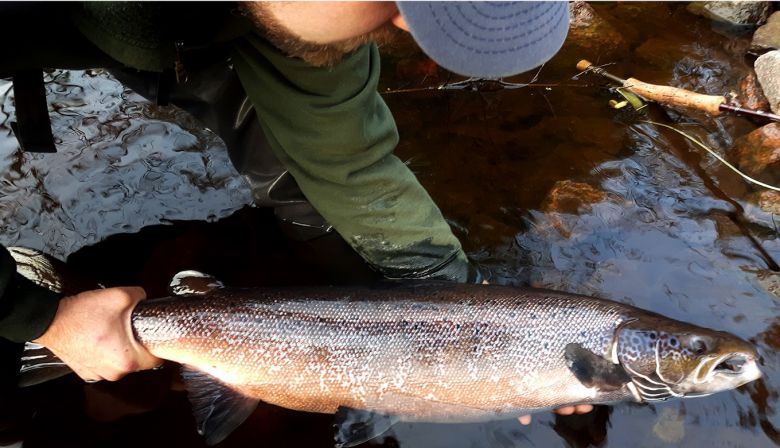 At a touch over 33 inches in length, this male from earlier this week was estimated to be in the neighbourhood of 14 lbs. Dave Main photo.
The water is now very dark, albeit clear, which makes it very tough to spot fish in the river, even with a good pair of polarized glasses.

The height seems to drop a little bit every day but it's not critically low yet. A shower or two over the weekend would be welcomed. 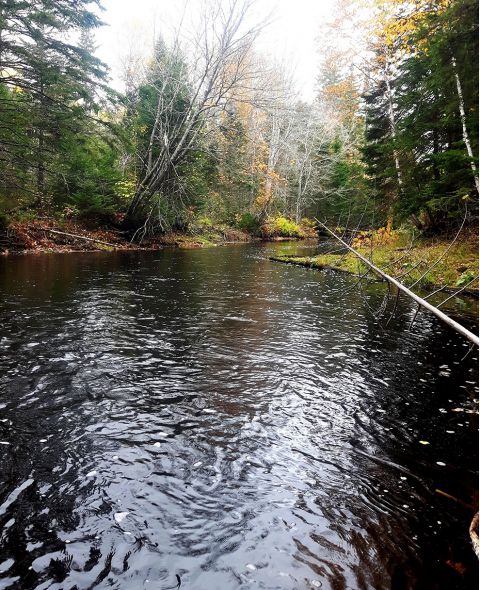 A windstorm this past Thursday signaled the end of most of the fall colours for this year. Taylor Main photo. 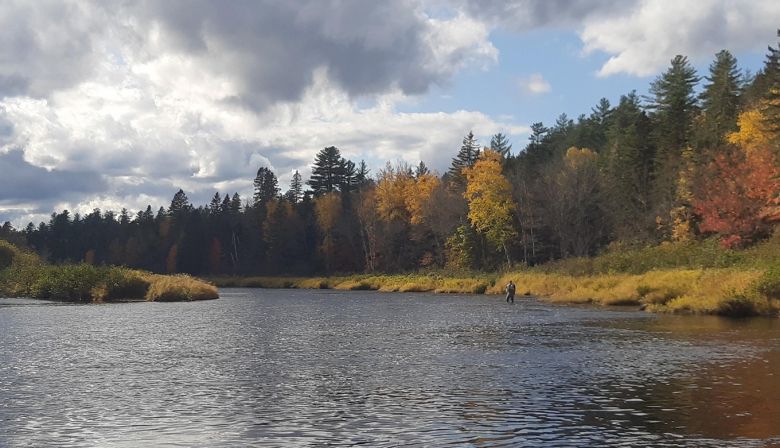 There were several absolutely beautiful days near the end of salmon angling season on New Brunswick's rivers. On the Cains on 14 Oct. 2019, day before the season ended. Geoff Giffin/ASF
Nathan Wilbur has a few comments as the season winds down:

There are still a few rivers open to angling in NB, such as the Nepisiguit, Bartibog, and Jacquet, but the majority closed on Oct. 15.

It was a fairly slow end to the season on the Miramichi, with the odd bright-ish fish being landed. Barrier counts from the Dungarvon and Northwest Miramichi show an uptick in numbers over the past week, fish making their final push upriver to find the preferred spawning location. In the coming weeks, groups will be out counting redds on the province’s salmon rivers to get a year-over-year comparison.

On the Restigouche, to help salmon reach the best spawning areas upriver in the headwaters, the Restigouche River Watershed Management Council has been out breaching beaver dams. While it’s somewhat sad to hang up the rod for the winter, it’s an opportunity to reflect on the season’s adventures and look forward to next year….and maybe tie a few flies. 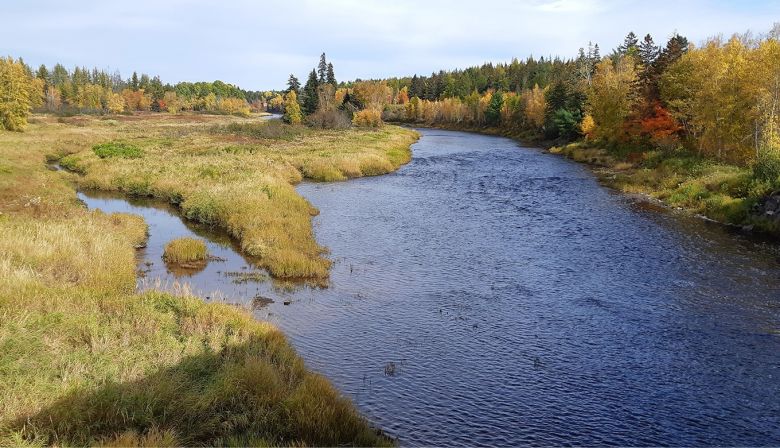 
Notes on a wider context of the Miramichi Barrier Counts

It is interesting to look at DFO’s Oct. 15 barrier counts on the Northwest and Dungarvon for the years 2004 to 2019. These facilities typically cease operations in mid October, so fish migrating through these locations after mid-October are not counted.

It is important to note that barrier counts are not total counts for the rivers. Rather, they represent the number of fish reaching these facilities which are situated very high up in the headwaters of each river, and therefore provide a relative indication of run strength in any given year. 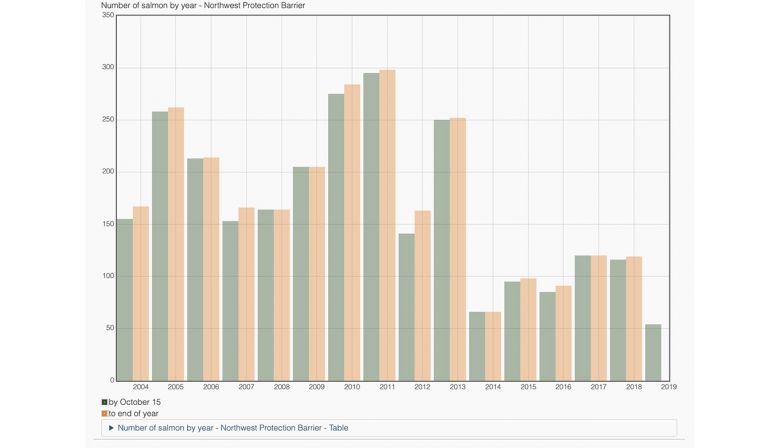 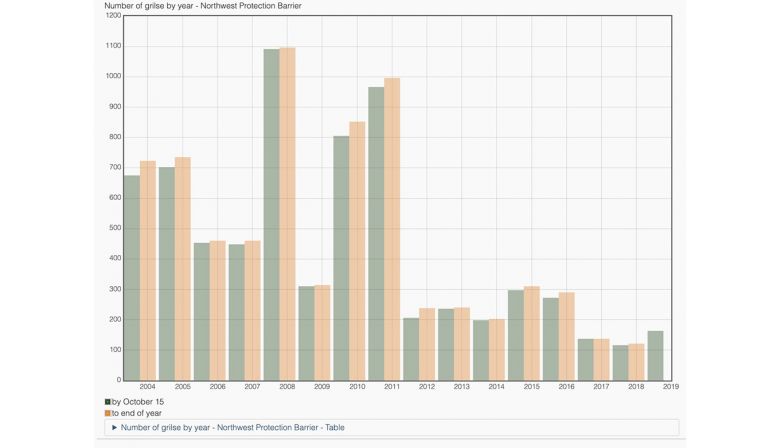 Northwest Miramichi Barrier numbers for grilse to Oct. 15
In the case of the Southwest Miramichi, the counting facility is on the Dungarvon, just one of the many tributaries in this watershed. 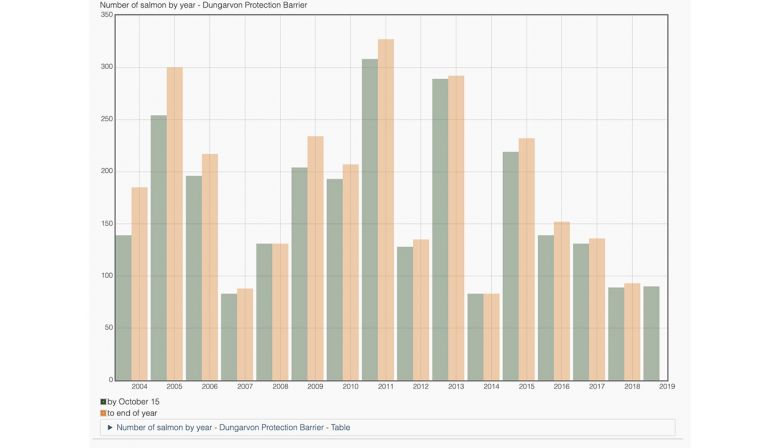 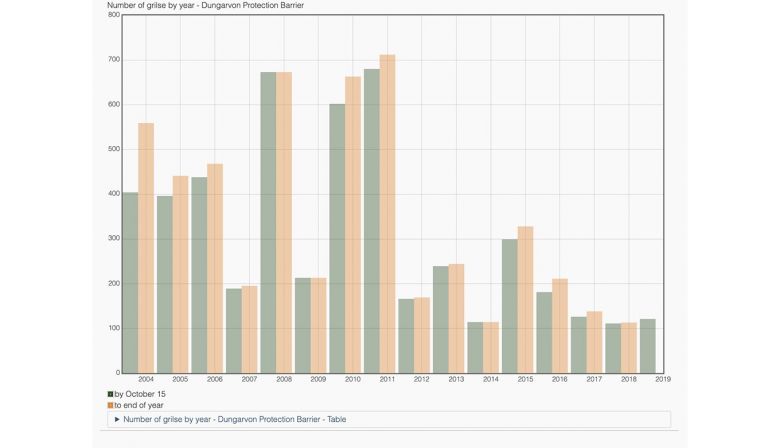 Dungarvon Barrier numbers for grilse to Oct. 15
In the coming weeks, we will take another look at the trapnet numbers once the data is available to the end of the monitoring season, which for the trapnets is October 31st. The final question is whether there will be a late influx of spawners into the system.

Edmund Redfield had an interesting Atlantic salmon in the trap net this week, that could be a wild returnee. But moisture in their tag reader meant it was impossible to have a full answer:

At 50.8 cm she was fairly obviously a 1 sea winter fish, so not a return from the 2018 releases... While it is not impossible she is a wild fish, the odds suggest probably not. So we released her. It's just too bad we were unable to read her tag. Since the I've gotten ahold of another tag reader from the office that we'll use tomorrow if we have any additional salmon then, in order to avoid a repeat of this problem. 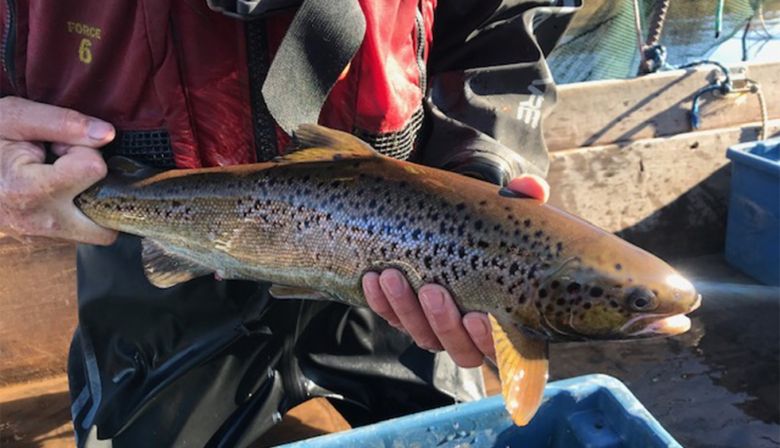 A Nathan Wilbur Photo-essay of October 2019 on the Miramichi

Nathan Wilbur, ASF's Director of New Brunswick Programs, is passionate about the province's Atlantic salmon rivers, and these images of the Miramichi capture a very special vision of the beauty of this very large watershed. Below are a set of images taken this October. 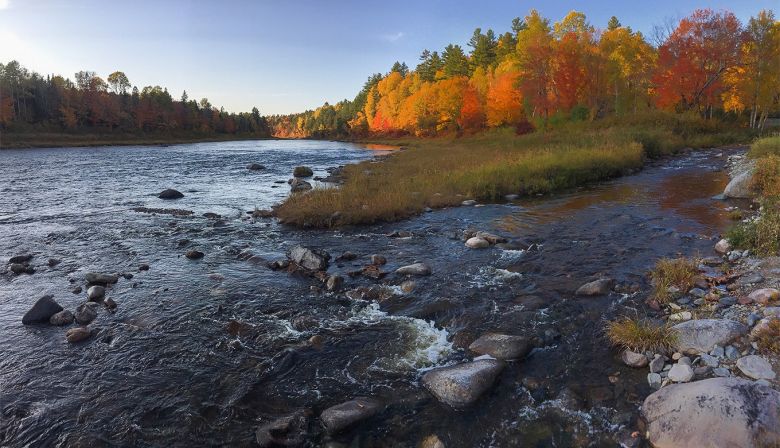 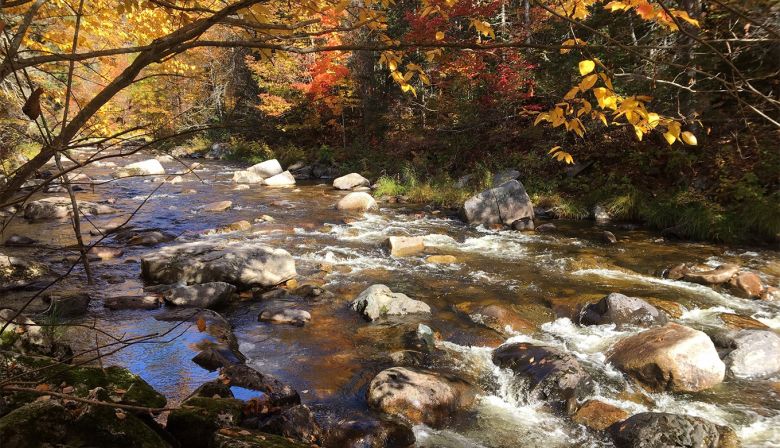 Rocky Brook may be narrow and full of riffles, but it is also a major producer of juvenile Atlantic salmon. Taken 9 Oct., 2019. Nathan Wilbur/ASF 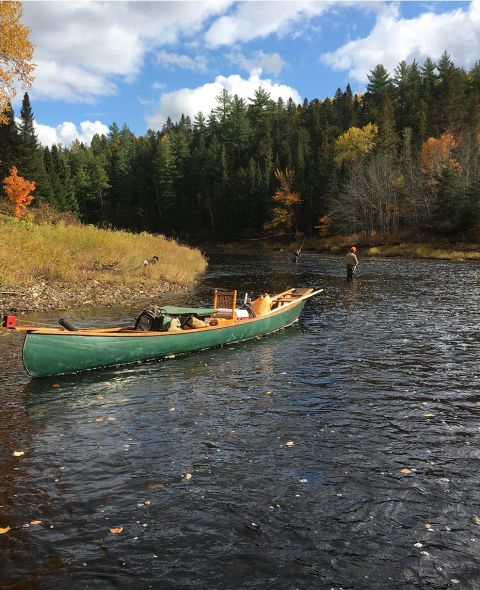 On Oct. 14, 2019, anglers on the Cains River enjoy the day before the end of season. Nathan Wilbur/ASF 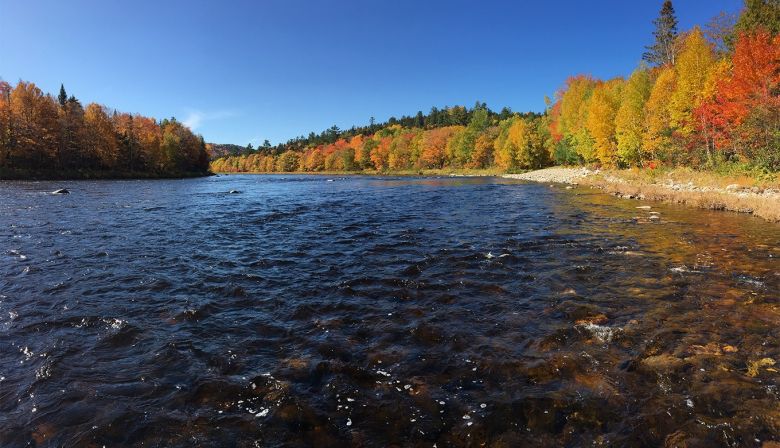 Upper reaches of the Southwest Miramichi on 9 Oct. 2019. Nathan Wilbur/ASF 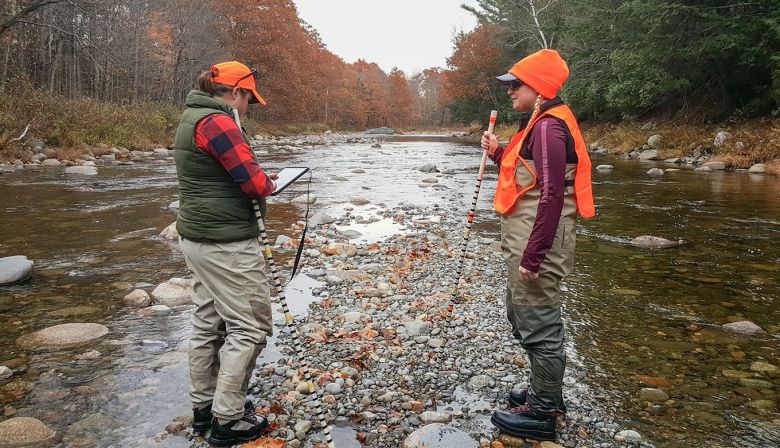 Maranda Nemeth along with two biologists from Maine's Department of Marine Resources were surveying for Atlantic salmon redds on Tuesday. Her notes:

We were doing red counts yesterday on the upper Sandy River of the Kennebec River Watershed.

The survey up and down the river was undertaken before the rain storm came in with a couple inches of rain. We observed a handful of salmon and brook trout redds and a few test pits throughout. No adults holding in any of the pools but did observe an adult in an area of spawning gravel and a few parr near the redds observed. River temperatures were all around 6-7 degrees C.

Overall, seems to be still early for spawning activity but there are no more rain storms on the horizon so spawning should pick up next week. DMR will continue to survey for the next five weeks in the Kennebec and Sheepscot drainages. 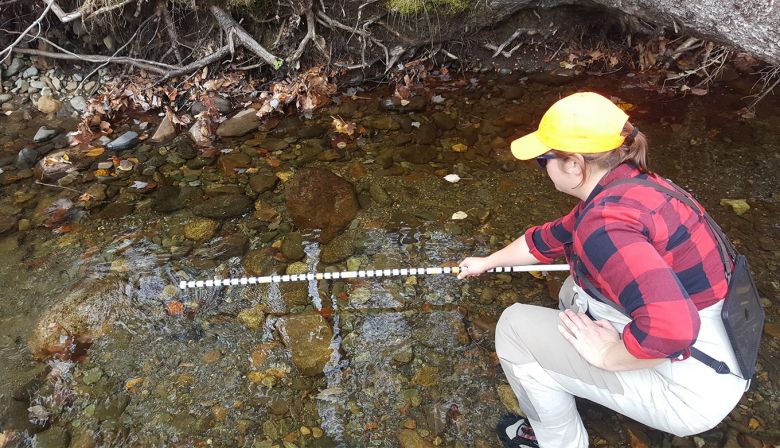 On the upper Sandy River in the Kennebec Watershed, DMR biologist Jen Noll measures the length of a salmon redd on Tuesday. Maranda Nemeth/ASF