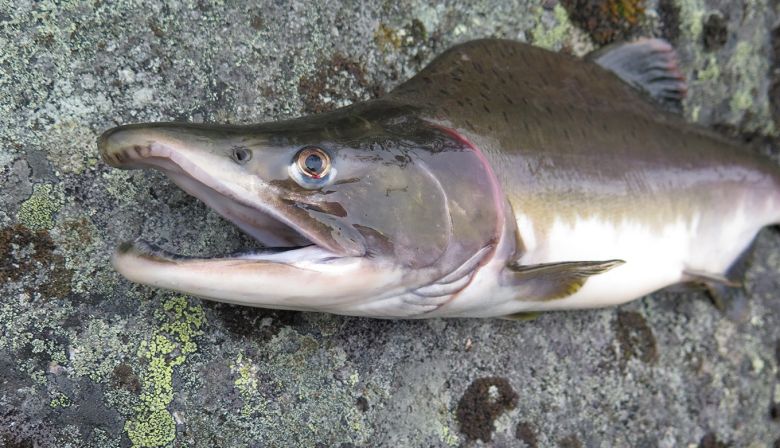 Pink salmon in a river in northern Norway region. Photo by Jaakko Erkinaro and 4 others
The Atlantic salmon countries of Europe, and most especially Norway, are in an uproar this fall. It is over the expanding influx of Pink Salmon (Oncorhynchus gorbuscha), an invasive species.

Eva Thorstad, notable scientist based at the Norwegian Institute for Nature Research (NIMA) at the Arctic University of Tromso says:

There was a huge increase in invasive pink salmon in rivers in the Northeast Atlantic this year. More than 100,000 pink salmon were recorded in Norwegian rivers (preliminary numbers, final numbers will be higher).

Pink Salmon have a two-year lifecycle and in Norway the odd number years have the largest numbers. But both odd and even year populations are growing. For an interesting single page, in English, from NIMA, go to:

The rise of this invasive species has resulted in the Norwegian government earmarking significant money for barriers in some of the rivers of the north of the country.

The fear is that the invasive Pink Salmon will displace the vital commercial and recreational Atlantic salmon in the years ahead.

Almost every other country in western Europe has a notice out to recreational anglers and citizens at large to report, and to kill any Pink Salmon they come come across. Denmark and Ireland are equally concerned about this interloper.

Scotland is particularly vigilant at the moment, and indeed if any of our readers are interested in following this, it is possible to sign up for a webinar taking place next week, on Thurs., Nov. 4. The time is from 4 pm to 6 pm Atlantic Daylight Time (ADT). For more details on joining the webinar audience, and sign up details, click here.

Co-sponsored by ASF's sister organization the Atlantic Salmon Trust, the webinar is entitled Impacts of invasive species on fish populations - the Pink salmon.

One reader of ASF Rivernotes wrote a couple of weeks ago, asking "How could this have happened", as we reported on the Pinks at that time.

Here is what we know. Some Soviet internal decision was made in the 1960s to introduce the Pink Salmon, found on the Pacific coast of the country, to some of the rivers around the White Sea. Why? The reasoning, very obviously is vague, especially with the important Atlantic salmon possibly suffering as a result.

Stock from rivers on Sakhalin Island were used, and the attempt was made over a number of years in the 1960s and 1970s. Fortunately those attempts were not successful.

In the last half of the 1980s, in the dying years of the Soviet Union, a second attempt was undertaken, using Pinks from the Ola River in the Magadan District. Unfortunately this invasive species introduction was successful, in rivers on the southern side of the Kola Peninsula and elsewhere around the White & Barents seas region.

They spread through the years. They eventually began colonizing also the magnificent Atlantic salmon rivers of northern Norway, including the Tana with its massive multi-sea-winter salmon and the revered Alta.

Within the last few years the numbers seemed to explode, and Pink Salmon were reported regularly in Atlantic salmon rivers further south in Norway, in Denmark, in Scotland, in England, in Ireland.

Disturbingly there were also reports in Canada, notably one in the Gander River, and several others apparently in Labrador.

Lately, even the eastern Canadian Arctic may have a Pink Salmon problem. An invasive Pink was found not far from Iqaluit this autumn.

In Norway, Eva Thorstad is involved in a major conference on the Pink Salmon with their expansion and risks to other species including Atlantic salmon. We look forward to that report.

If any reader wants to explore more on the origin and expansion of the Pink Salmon menace, the following two pdf science papers offer a starting point.

Pink Salmon in the Barents Region (2016)

Is the invasive Pink Salmon expansion in Norway and elsewhere important to us?

This particular stock of Pink salmon seems to wander in its choice of spawning rivers more than most, and certainly can churn up and take over areas important to Atlantic salmon. It is highly likely the Pink Salmon seen in recent years in our own rivers are merely the first scouts of more of the species in the years ahead.

We need to be vigilant. Certainly DFO wants each and every report of Pink Salmon reported to them. We would say the same, and would be interested to hear of any of these fish being spotted. Plus photographic evidence is important in documenting what is happening. 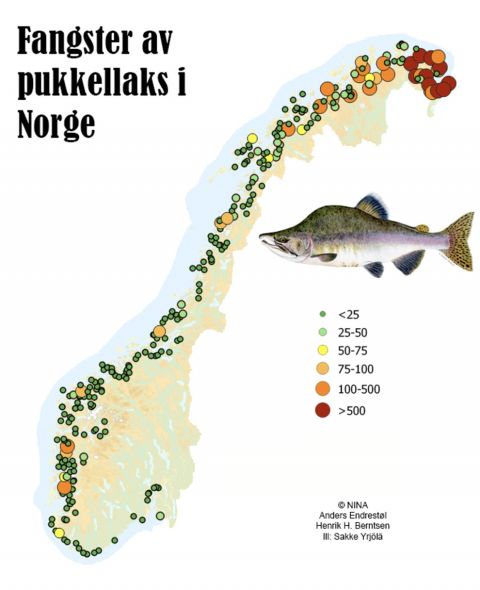 The expansion of Pink Salmon in Norway. Illustration by NIMA 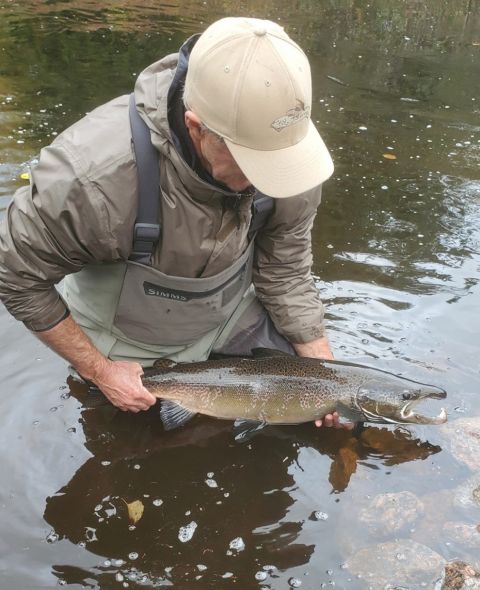 Dave Main releases a 31 in. male on Oct 18, 2021. Taylor Main photo
While little is written about the Atlantic salmon runs of Prince Edward Island, they are significant. For some, the situation might be reminiscent of the Atlantic salmon populations of England in the U.K. There, Scotland and its rivers like the Tay, the Spey and the Ness get more of the press, but the English rivers, from the Tyne in the northeast to the Frome in the southwest have important runs.

In Prince Edward Island there are dozens of rivers with Atlantic salmon runs, also in a semi-pastoral landscape, and with a few notable rivers like the Morrell. 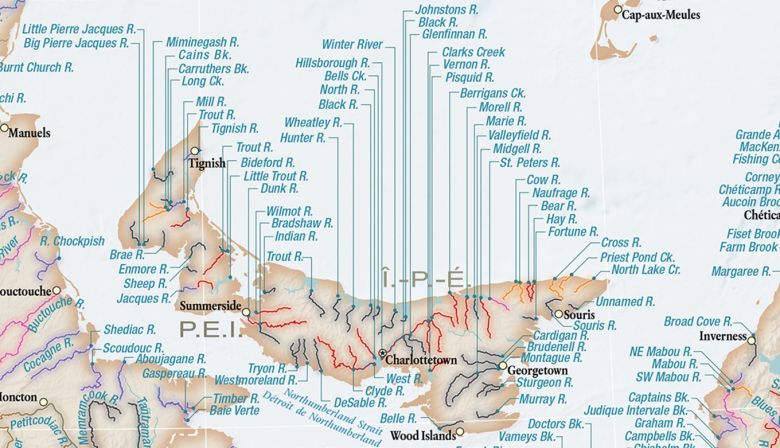 We got a shot of much needed rain this past Saturday night and into Sunday morning, totaling 27mm not far from the river. Most of the rain came in a quick burst early Sunday morning which resulted in high and coloured water through Tuesday.

As such we have had near perfect angling conditions since then with the water starting to drop and clear now. 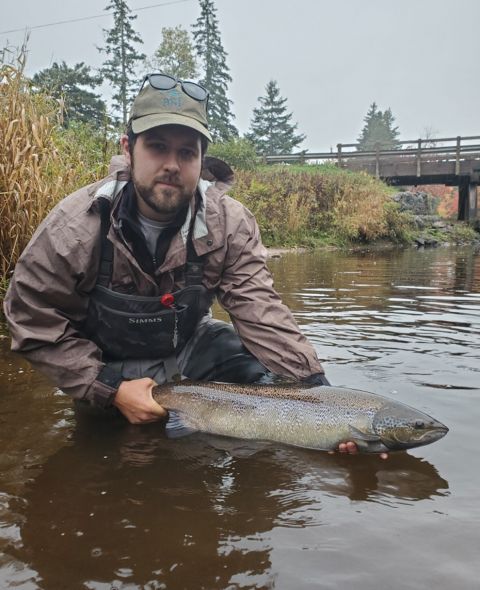 A 31 in. female estimated at around 12 lb. being released at Indian Bridge Pool on Oct 14, 2021. Tyler McGillivray photo.
Taylor Main continues:

Despite the fantastic water conditions, we are still having to work pretty hard for any fish. There are a few more in the river than this time last week but still not many.

We certainly are not seeing multiple hookups per day either, like other years, as the odd person catching a fish here or there remains the norm.

As a positive note there seems to be a higher proportion of larger multi-sea-winter fish compared to grilse this year. 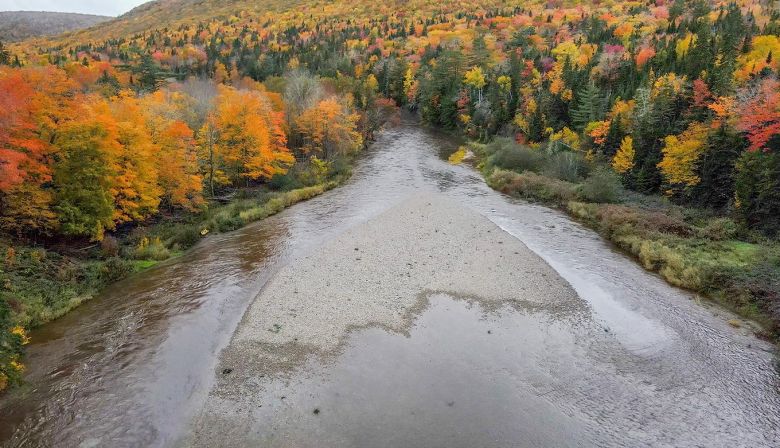 Middle River in all its mid-October 2021 finery. Tom Cheney/ASF 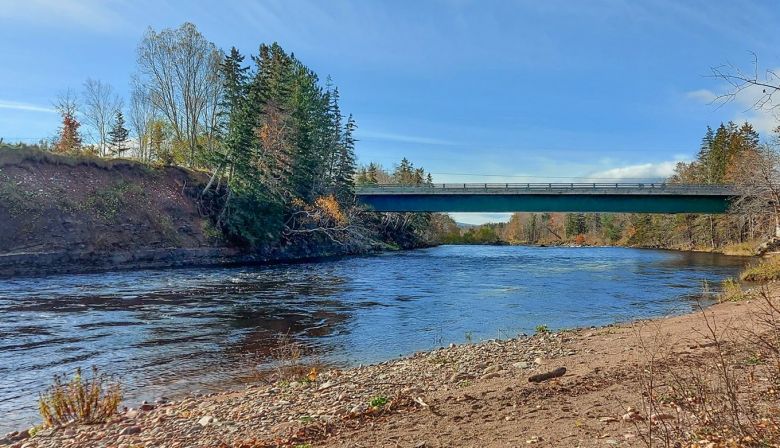 We finally got the "Fall" water we have been waiting for.

With a good dump of rain we have been seeing fish pushing up the Margaree to the spawning grounds. Over the last couple weeks we have seen redds being made throughout the river.

With just a few days left of the season, many are out looking for one more tug on the line. 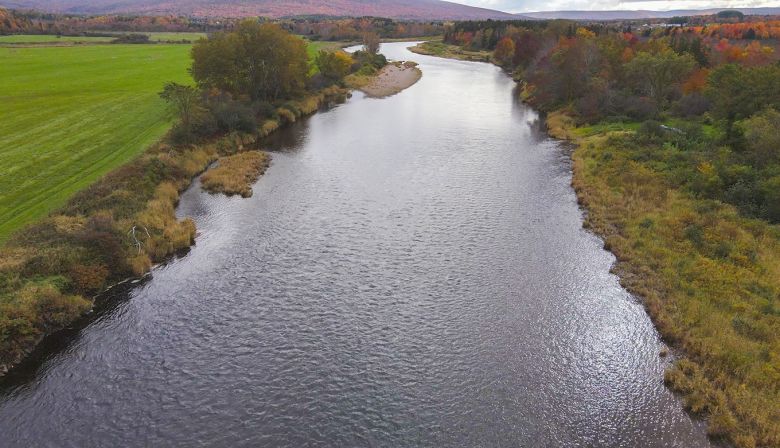 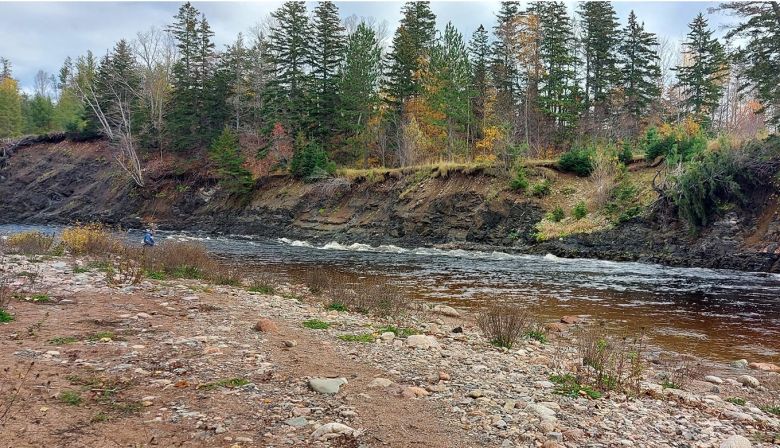 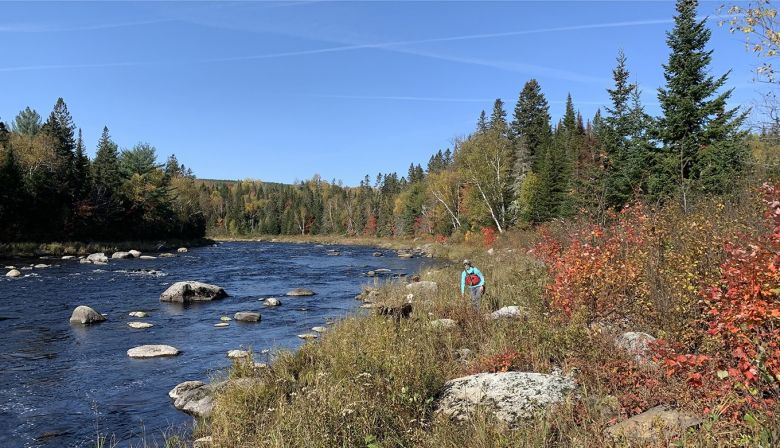 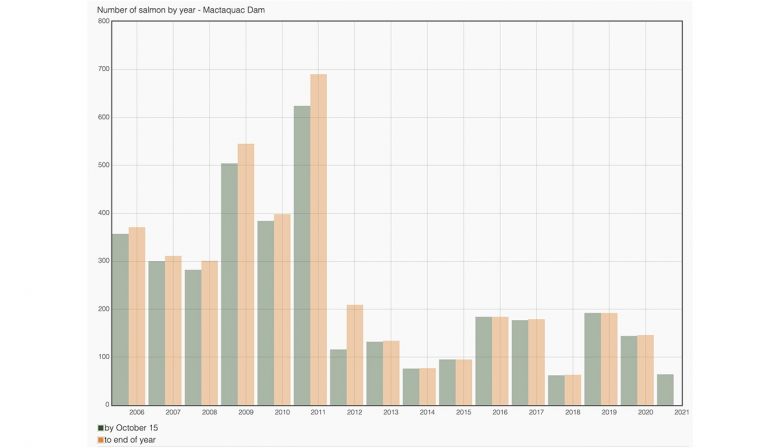 Large salmon at Mactaquac in recent years, as counted to Oct. 15 and end of the year. 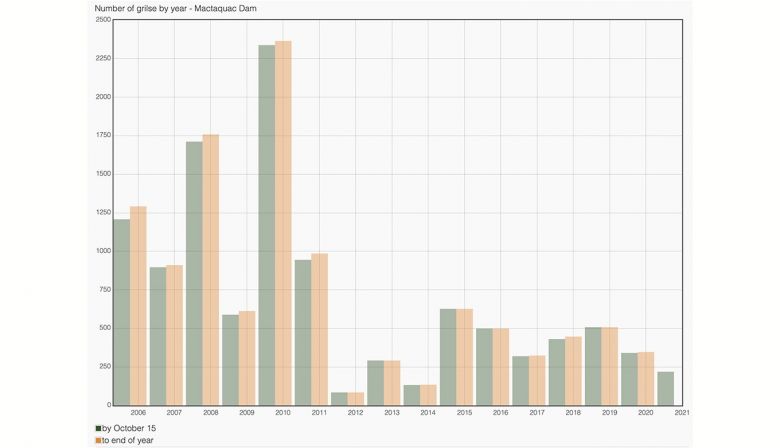 Grilse as counted at Mactaquac to Oct. 15 and to end of the year since 2006.
These numbers compare with about 5,800 large salmon returning, plus more than 3,000 grilse, immediately following the Mactaquac Dam construction.

Historically, the greater catch was down where the river met the Bay of Fundy. One reference, Patrick Campbell said that 3,000 Atlantic salmon were caught in a single day around the late 1790s. Single fish sold for about a shilling.

But the dam changed everything. Atlantic salmon had to be trucked above the dam. Smolts tracked showed the fish were largely unable to find their ways downstream, with fickle currents in the headpond destroying their inborn downstream migration skills. 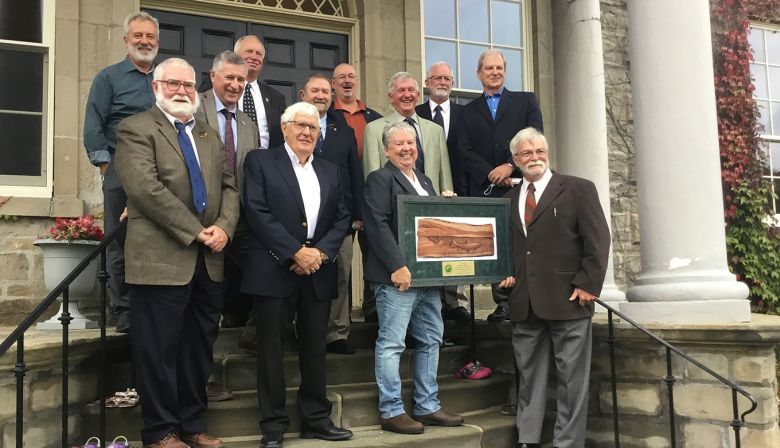 At times, charts and graphs can give a better window on matters than words can. Here are some charts related to ASF's research activities this year, and in comparison to past years. 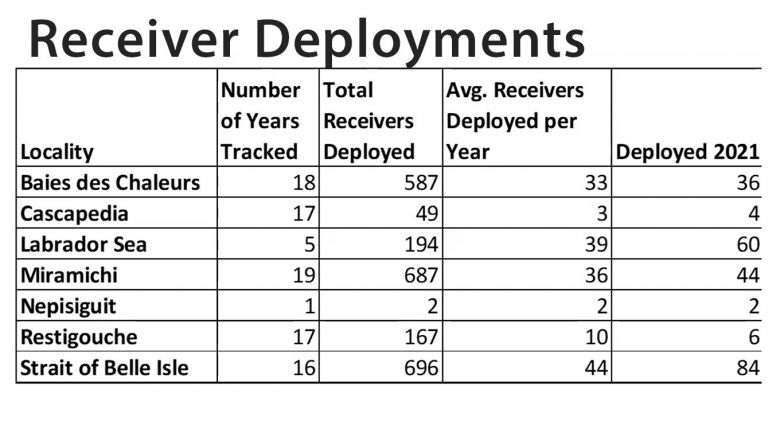 Tracking receiver deployments since the program began at-sea in 2003.
The Logistics

Think for a moment on the logistics of this program. Besides the storage, travel and maintenance of the receivers themselves, there are thousands of metres of marine rope, and hundreds of anchors. In 2021 there were 236 units deployed, by hand, from boats, and with details logged of position, and data retrieved. The biologists and volunteers of ASF and its sister organizations, together involved in this massive effort, need to be recognized for their long hours, often in windy, wet conditions on boats in less than ideal sea-state. 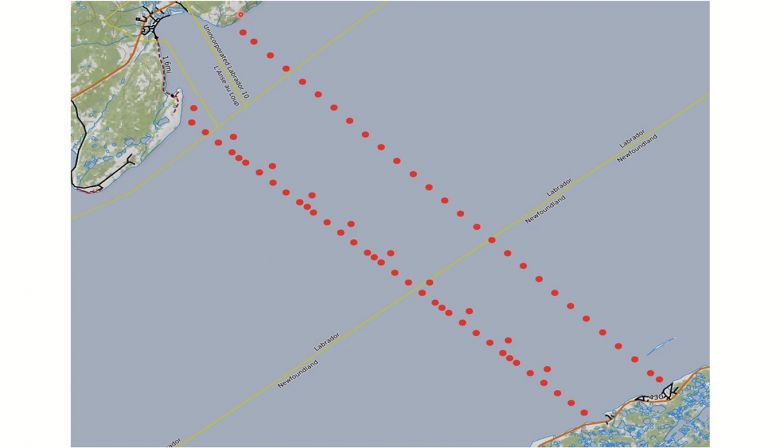 Acoustic tracking receivers in 2021, across the Strait of Belle Isle between Labrador and the Island of Newfoundland. The two lines with more dots provide a way to check on the accuracy of each line's gathering of data. The line with fewer dots is a new advanced technology, theoretically capable of greater sensitivity, and being tested for possible future use. 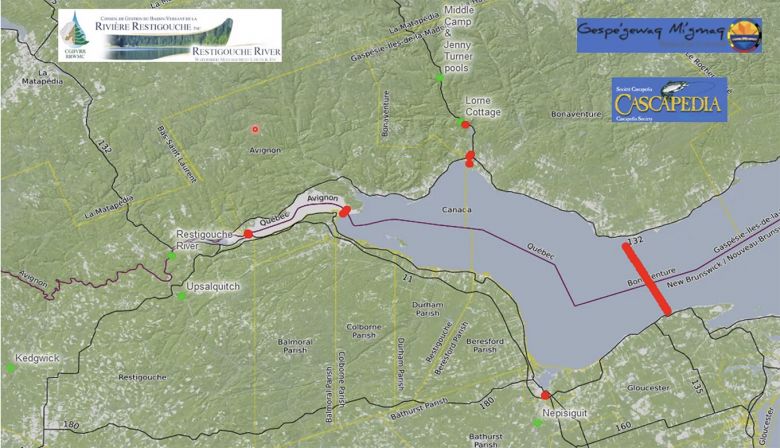 Acoustic tracking receiver lines in the Baie des Chaleurs. Note the logos of organizations that are working with ASF to see the system deployed, and results retrieved. 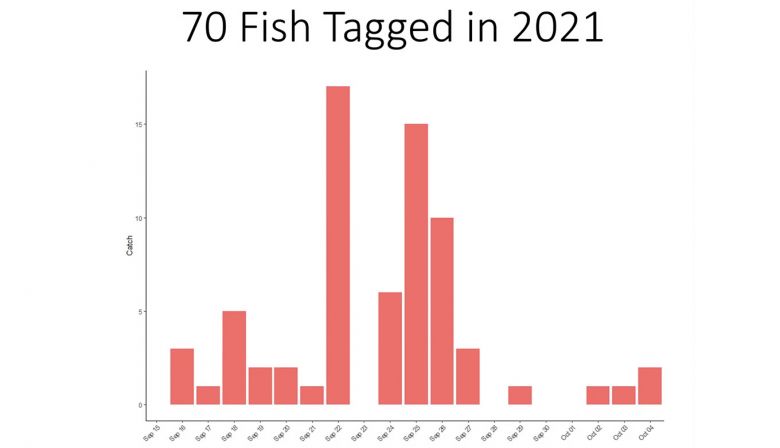 A day-by-day count of the project by ASF personnel in southwest Greenland to capture and apply satellite pop-off tags to Atlantic salmon. 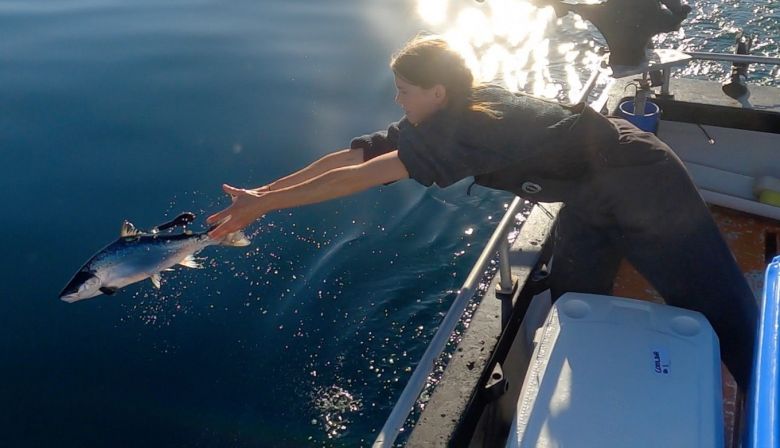