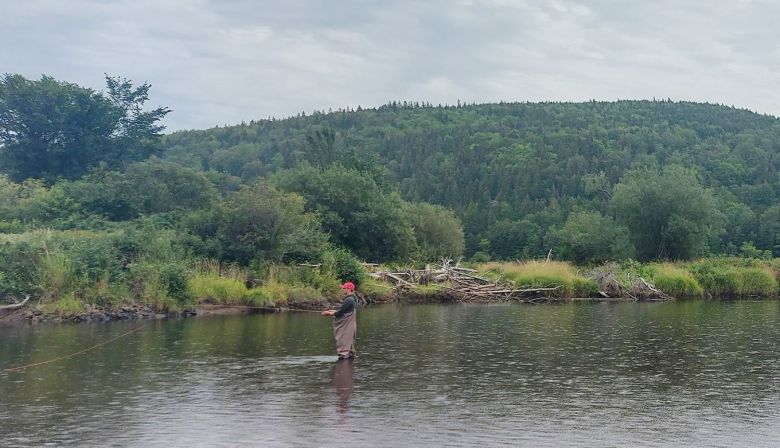 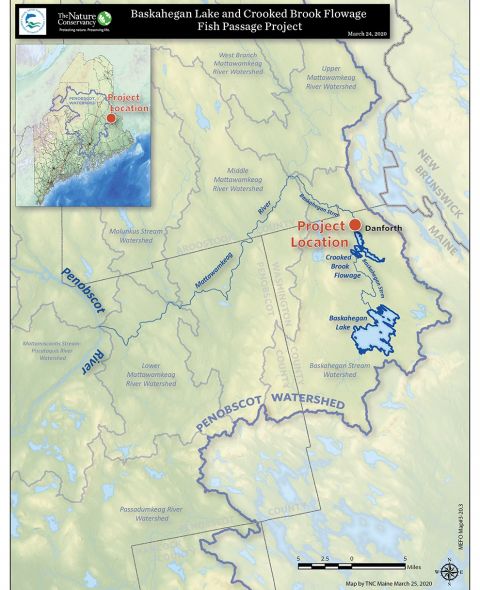 Location of Crooked Brook and Baskahegan Stream Fish Passage Project
ASF's Maine Headwaters Project is encouraged by a new $198,000 project to install a fishway for river herring at Baskahegan Lake and Crooked Brook located in the upper headwaters of the Mattawamkeag River, the extensive easternmost branch of the Penobscot River watershed. This area is adjacent to Danforth, and just a few miles from the adjacent St. Croix watershed and East Grand Lake.

Why is this important to Atlantic salmon? Maranda Nemeth, Director of ASF's Maine Headwaters Project explains:

For the Penobscot, restoring fish passage in the headwaters is imperative because that is where spawning takes place, and it is critical that we focus on the headwater regions. Both upstream and downstream passage are needed. River herring are important, as they are an important prey species migrating in the Penobscot at the same time as Atlantic salmon smolts are moving downstream to leave on their ocean migration.

This project shows how amazing is the migration of species like the river herring and the Atlantic salmon. This part of the Penobscot watershed is 100 miles above the former Veazie Dam that the Penobscot Project removed, and 130 miles above tidewater.

Improving fish passage on the headwater streams is imperative, and the Mattawamkeag Branch is a vast web of streams that after removal of the mainstem dams can now play a far more important role in the restoration of the watershed's health. 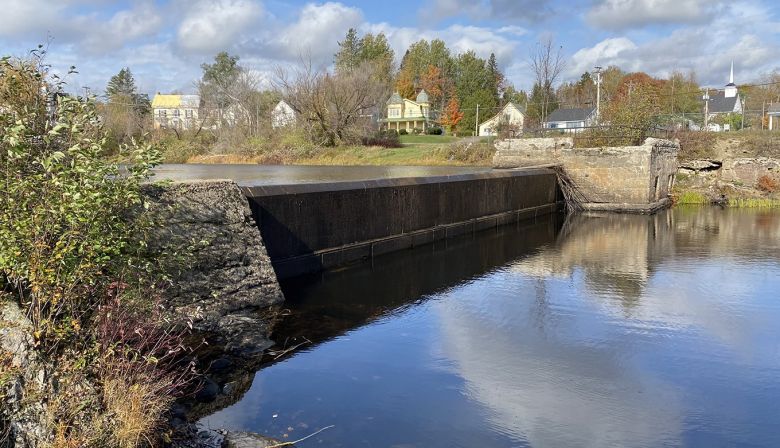 The dam on Crooked Brook will be reworked to provide fish passage upstream to Baskahegan
The watersheds east of Mt. Katahdin have seen a resurgence of interest that began with the interest of Roxanne Quimby who used profits from the "Burt's Bees" company she co-developed to purchase land tracts encompasing significant parts of the East Branch of the Penobscot. Through her efforts, a large portion has been set aside for future generations in the Katahdin Woods and Waters National Monument.

In addition, the removal of the Veazie and Great Works dams on the Penobscot mainstem have given new hope and new life to the East and Mattawamkeag branches of the Penobscot.

At the end of the 19th century, the East Branch and Mattawamkeag were of increasing interest for their Atlantic salmon angling. But several things happened. The construction of the massive Veazie and Great Works Dams on the Penobscot mainstem reduced fish passage. And it is uncertain what the impact was of a new hatchery with augmented stocking that took place in the years before WW1. Much of the stocking through the years was not even of Penobscot "DNA" salmon.

Whatever the reasons, by 1919 the numbers of Atlantic salmon in these rivers east of Mt. Katahdin had crashed. At various times, especially in the 1940s and 1950s there was stocking. A half century later, many have questions whether the stocking had the greatest negative impact, or whether it was the dams and barriers to fish passage.

In the last few years these streams related to the East Branch and Mattawamkeag are being viewed with new eyes. Fish passage improvement may be the key to their future.

There is local support for the improvement of fish passage related to Crooked Brook and Baskahegan Stream, as explained by Maranda Nemeth:

Since 2017 there has been a committee involving local residents that has helped development both the fish passage improvement project and a wider approach to redevelopment that looks at the future of these headwater streams as integrated in the future of the residents and their economy. It is exciting to see the new approach develop.

These developments build on the momentum generated in the past quarter century in seeing the Penobscot watershed reborn, and reconnected with the ocean. 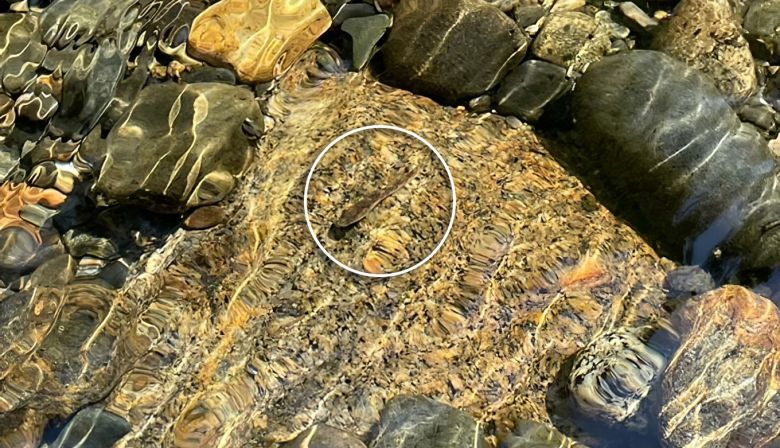 Atlantic salmon parr holding its position in the Sandy River, tributary of the Kennebec.
Kennebec:

Water levels have continued to be somewhat stable in the mainstem Kennebec in Waterville this week. Flows have been hovering around 2,000cfs. According to the USGS water data in Sidney, this level is between minimum and 25 per cent historic flows for this date.

Temperatures at the Lockwood fish lift have been ~24°C on average all week. The fish lift has been operating on a limited basis due to temperature restrictions. No new adult Atlantic salmon have been captured and transported.

On the Sebasticook River, the lift is closed for maintenance. Eel passage has slowed. Preparations have begun for a downstream adult eel study at Benton. On Outlet Stream in Vassalboro, preparations are beginning for the removal of Morneau Dam.

Juvenile Atlantic salmon sampling has begun on the Sandy River for the season.

To date 33 electrofishing “catch-per-unit-area” sites have been completed in order to assess abundance and distribution of the general population, new egg planting sites and areas of wild spawning. 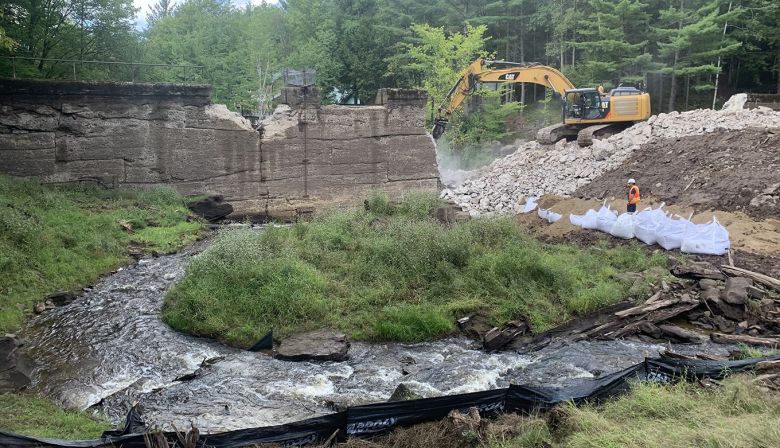 The Campbell Creek Dam on this tributary of the Nashwaak is coming down. Nathan Wilbur/ASF
Nashwaak

There is some terrific news. ASF and several Indigenous/NGO groups have been working together on the Campbell Creek Dam removal initiative for about four years.

We secured $750k and turned an idea into reality. This week marked the beginning of demolition, and what a welcome sight it was. This fall, adult Atlantic salmon will have free passage to spawn up this cold, clean tributary to the Nashwaak River, part of the St. John river system and home to the endangered Outer Bay of Fundy Atlantic salmon population.

The dam is over 100 years old, and it’s about time we take it out for the benefit of the ecosystem.

With the advent of cooler temperatures, the rules have changed:

Regular angling hours have been reinstated

To keep up, check this page:

For the Cassilis Trapnet on the Northwest Miramichi there have been 132 large salmon and 315 grilse this year, compared with 48 large salmon and 220 grilse in 2019. These are definitely encouraging numbers!

For the Millerton Trapnet on the Southwest Miramichi there have been 256 large salmon and 848 grilse this year, compared with 101 large salmon and 348 grilse in 2019. Again, these are definitely encouraging numbers.

In both cases, it should be pointed out that while 2021 is an improved year, the numbers are well below those seen 20 years ago.

The Aug. 29 numbers for the counting fences are:

It will be interesting to see whether the rain falling on Thursday of this week has an impact on the upstream migration of the Atlantic salmon.

We are starting to get a few anglers back on the river since the warm water protocols have been lifted.

Salmon have been showing even during the warm water temperatures, but I haven't heard a lot from anglers hooking into salmon yet.

We need to get anglers back at the clubs and lodges again to really get a sense of how good the angling is.

Water temperatures are down in the 60's F range but we could use rain. The forecast is for significant rain for the next two days so that will really flush the river out and hopefully bring in some fresh salmon.

It will be interesting to see how the angling will shape up during the rain and raise in river levels over the next few days. I expect there will be a few happy anglers around. 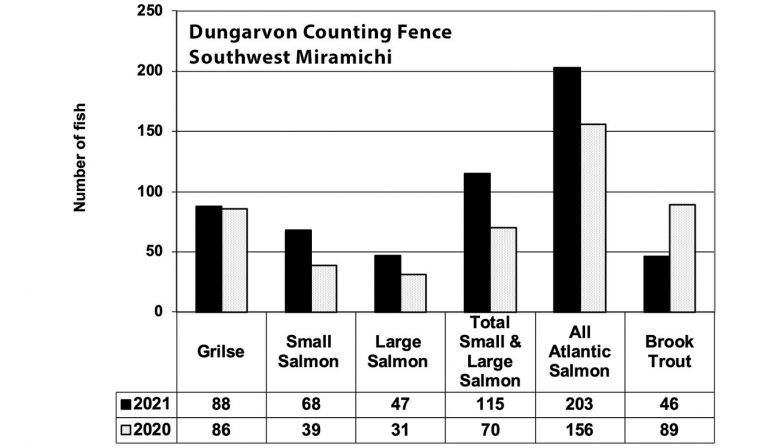 Dungarvon Counting Fence on this tributary of the Southwest Miramichi. Numbers to Aug. 29.
Restigouche

Aug 30 saw the reopening of the Restigouche to regular angling hours.

Water levels remain low, although something of a bump in levels was experienced on Wed., Sept. 1. 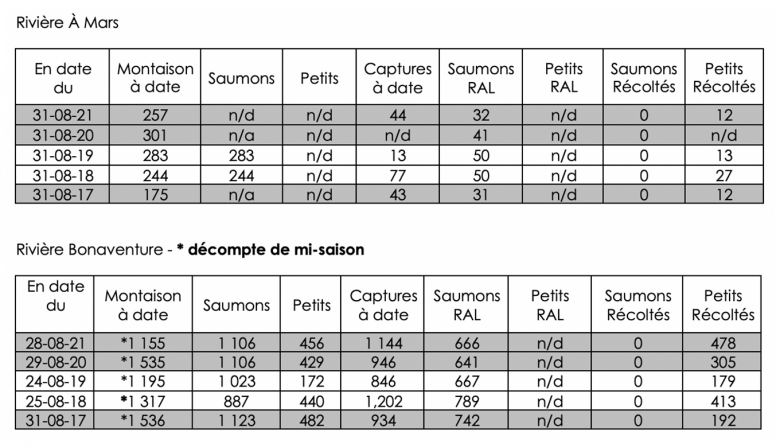 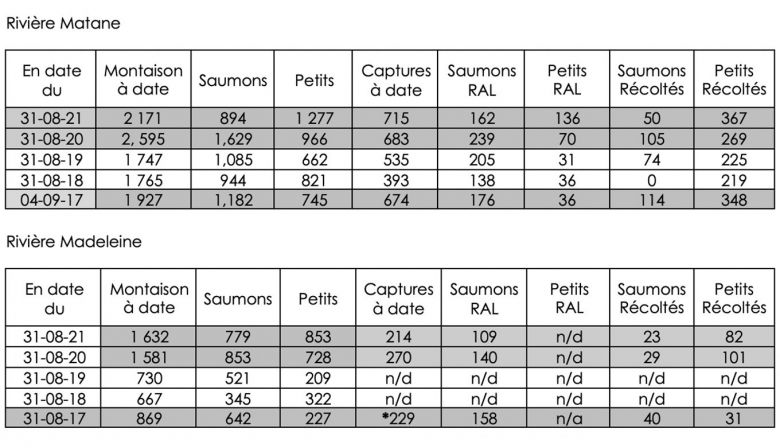 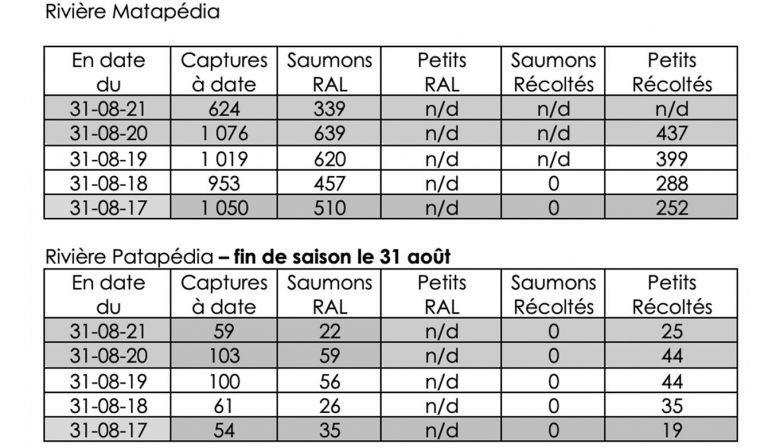 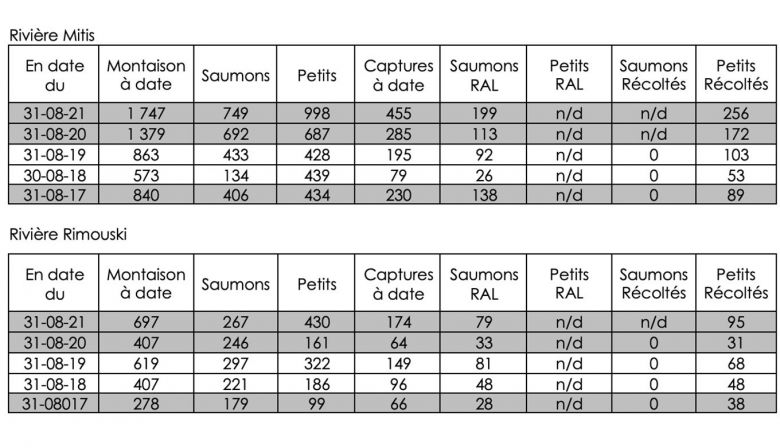 As we begin the last month of the 2021 season, low water conditions were a major factor affecting angling success during the month of August on many rivers.

The tables listed below display statistics to August 31st during the last 5 years for comparison.

There is hope for better conditions soon, major rain fall is predicted over the next few days (over 60 mms) in the Gaspé region. Please be safe on the rivers during this time.

Please be aware, mandatory live release of salmon is in effect on many rivers as of Sept. 1.

The data used for the Quebec River notes are sourced from various river websites, social media and Quebec government sources. Information can change without prior notification regarding prior year comparative figures. 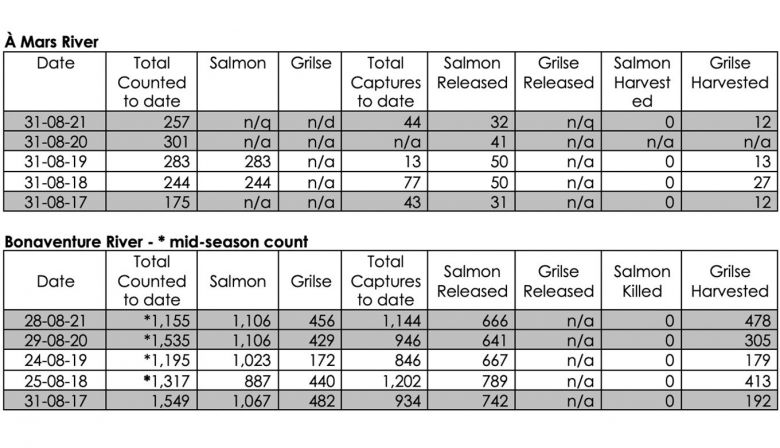 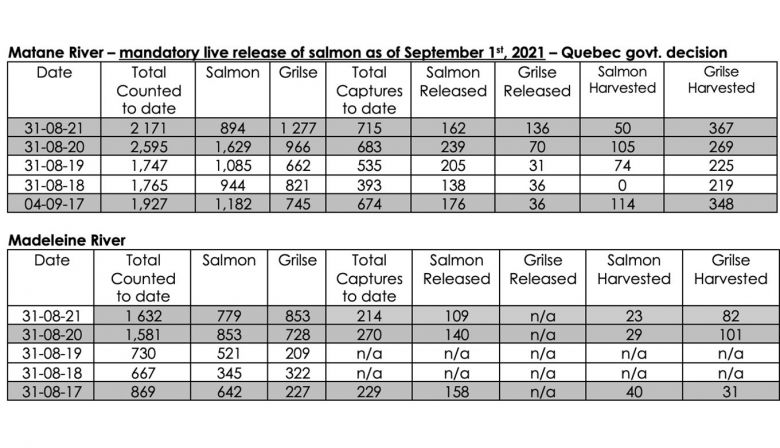 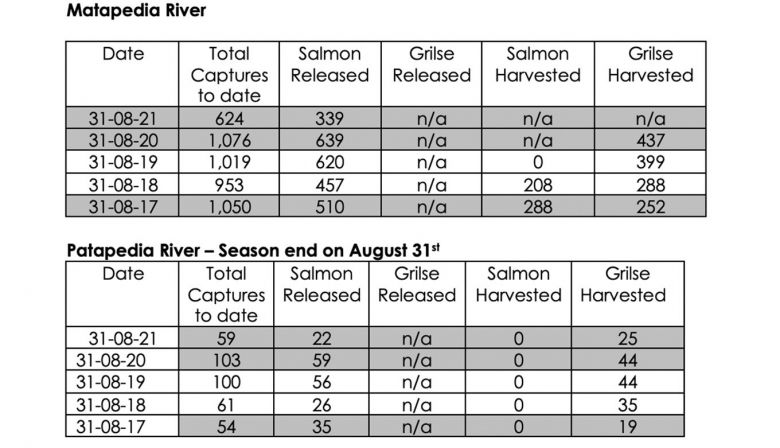 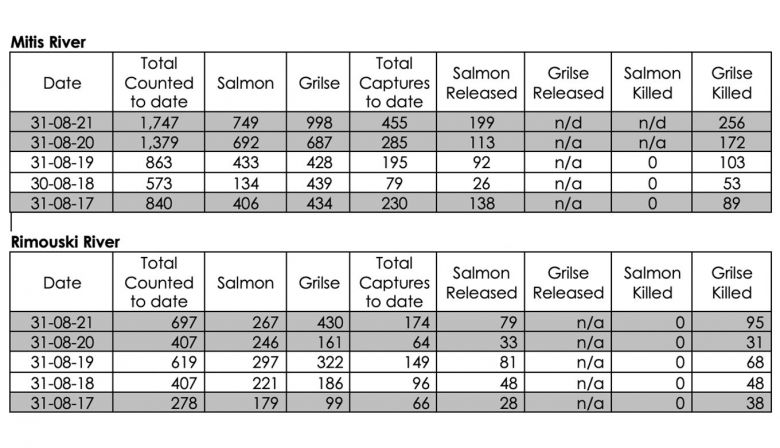 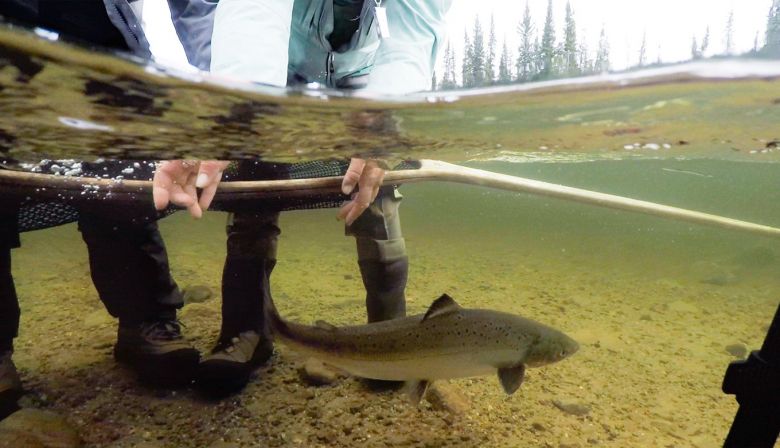 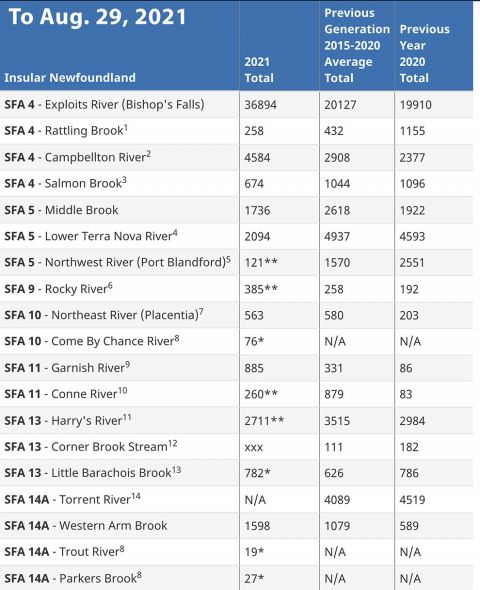 Counting fence data for island of Newfoundland to Aug. 29, 2021.
Certainly some good news in the counting fence numbers.

Tolson Parsons gives his perspective on the situation we have:

Water levels are extremely low here in central Newfoundland except for the Exploits River which is controlled by dams.
Exploits also had 36,894 Atlantic salmon which is really good.

Also even with low water other rivers such as the Campbellton had good numbers of fish even though fishing was poor with the low water.

Most rivers in central Newfoundland have been closed except for early morning angling. So good news and bad news. A strange year!!!

It may be that rain will improve things slightly on Friday as the remnants of Hurricane Ida pass across the island.

They are planning in two years to have a second counting fence on the Bay de l'Eau River. Read this for more information 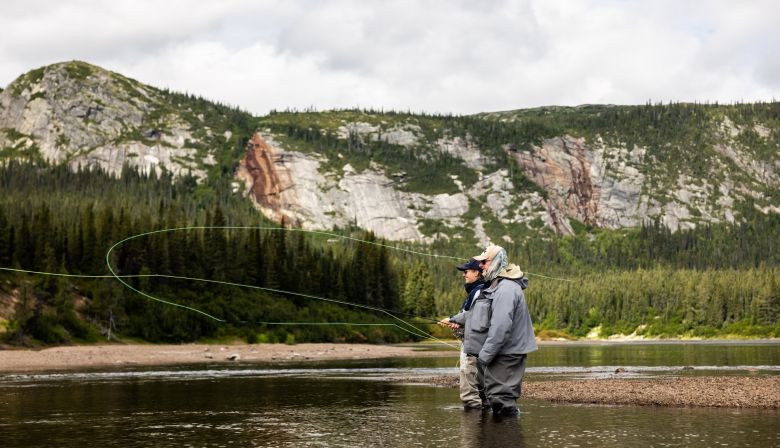 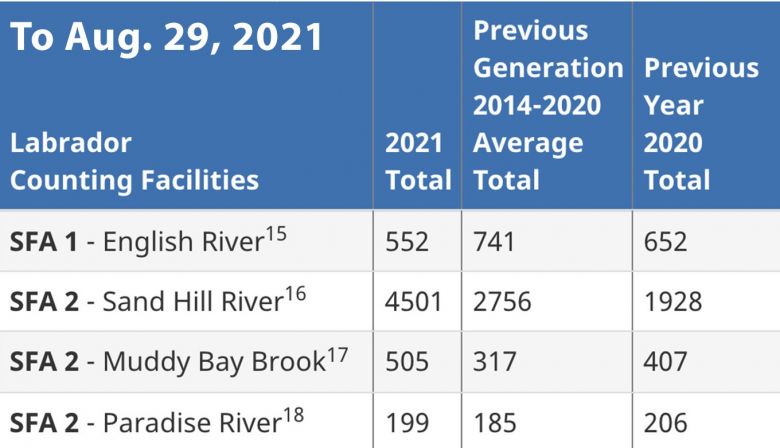 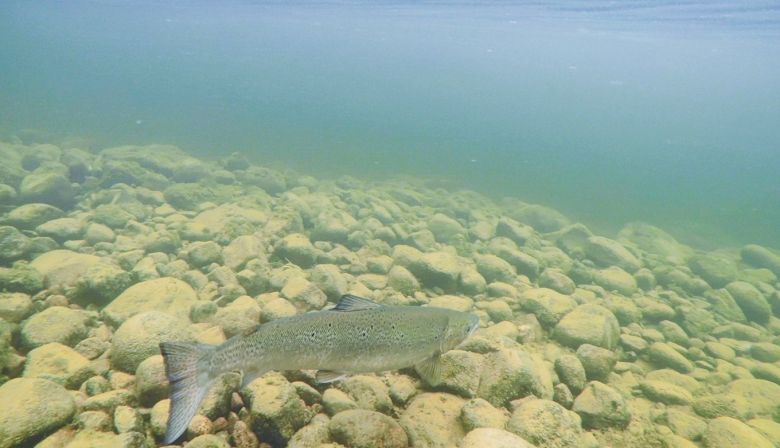 An Atlantic salmon goes on its way, released at Flowers River Lodge in Labrador by Kastine Coleman. Photo Tom Cochrane
Nothing to report beyond the counting fence numbers. Essentially the Sand Hill River is the standout this year among the few being actively assessed. 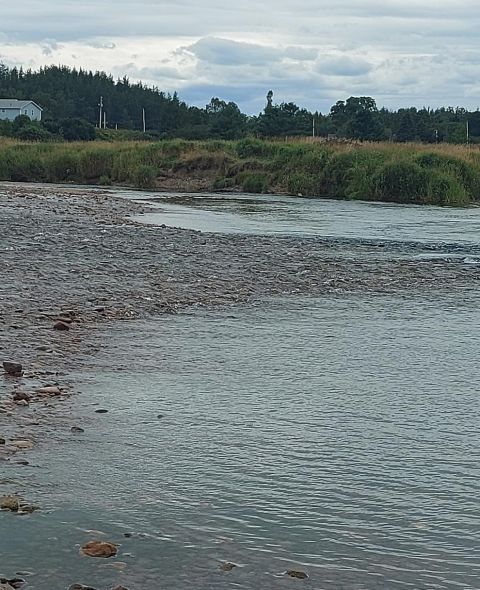 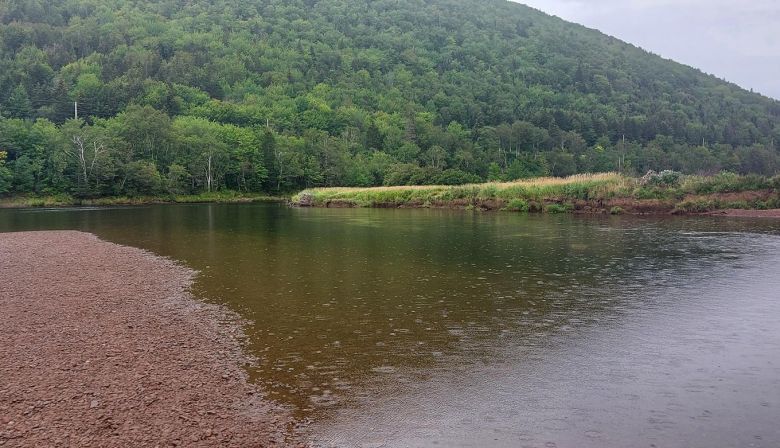 On Sept. 2 the rain arrives, thanks to Hurricane Ida. Will the fall run of Margaree salmon follow? At Tidal Pool on the Margaree. Photo Patrick Poirier.
Margaree

Water levels have continued to drop with the lack of rain . But the good news is that temperatures are staying within bounds with the cooler nights.
Possibly significant rains may hit on the weekend and it could be the start of the fall run. Hoping for those remnnants of Hurricane Ida.

We have been watching Atlantic salmon moving in and out on the tides in the Margaree's estuary, with the fish just waiting for the rise in water needed to start the migration .

The angling season officially opened on Wednesday for the salmon angling in the Northumberland Strait rivers, but ASF's Kris Hunter, Director for Programs in Nova Scotia and Prince Edward Island, notes that the water levels have been very low. Again, modest rain showers are expected that are part of the remnants of Hurricane Ida, but it is expected there will not be a large bump in levels. 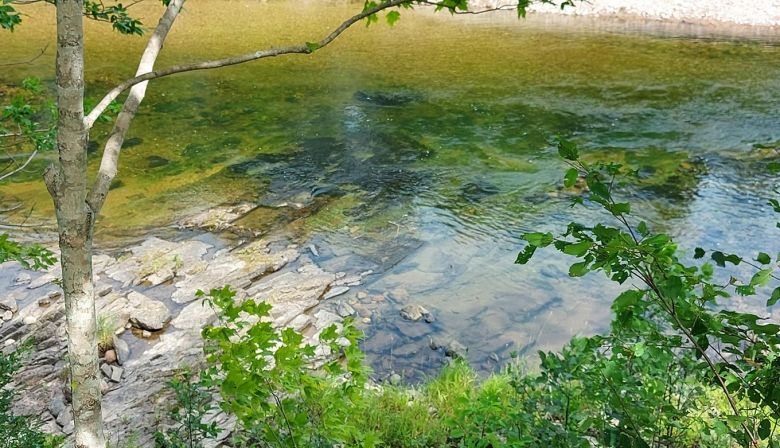 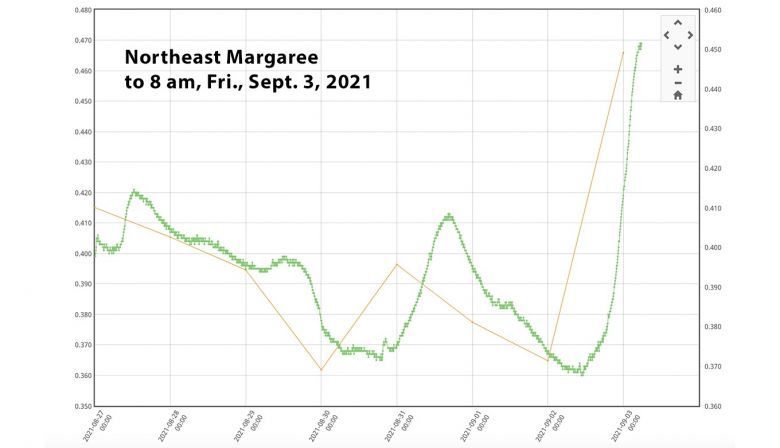 At 8 am on Fri., Sept. 3, the rise due to Hurricane Ida on the Northeast Miramichi is clear. Likely more Atlantic salmon will move into the river this weekend. 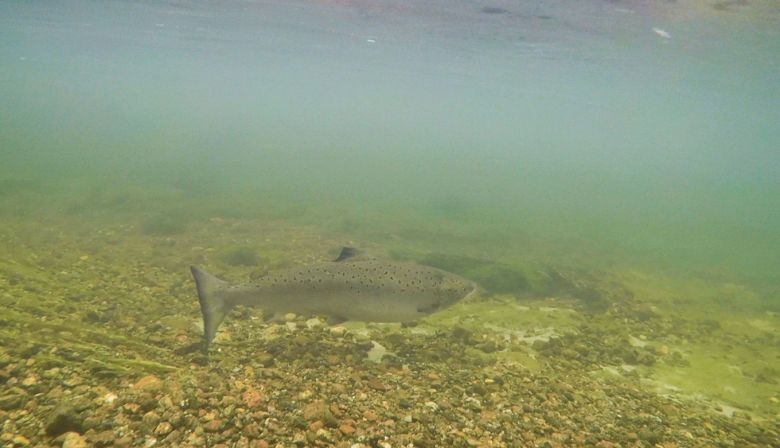 An Atlantic salmon slips back into Labrador's Flowers River last week, released by Terry Byrne and Kastine Coleman. Photo Tom Cochrane
This week there are some wonderful underwater images of very healthy large Atlantic salmon on the Flowers River in Labrador. We may all be wound up in a time of Covid-19, and concerns about variant viruses.

But it remains vital to remember that these wild Atlantic salmon, heading for headwaters spawning beds, are important in the scheme of things. We need to keep a perspective that natural life cycles matter. Now and forever.