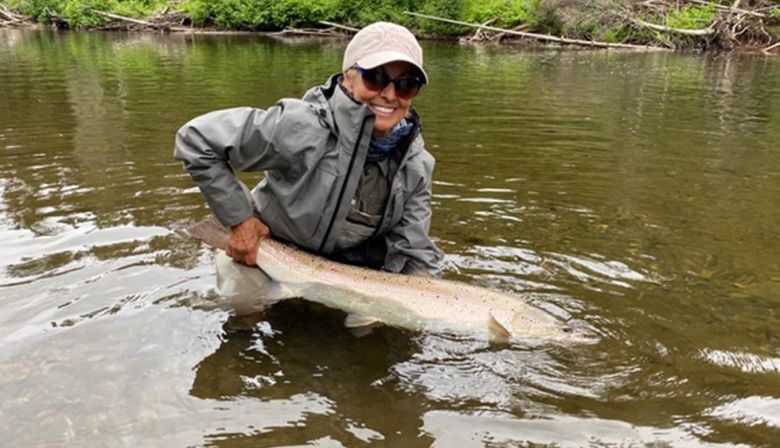 For anyone interested in getting out on New Brunswick salmon rivers, and who is a resident of the province, there is a deal for you.

Recently announced, the Explore NB Travel Incentive Program will give residents a 20% rebate on approved staycation expenses, which include accommodation, food, and guiding. The program is in effect now, and will continue until the end of September.

Brock Curtis of Curtis Miramichi Outfitters in Blackville notes that more people are taking care of their receipts.

"Nice to see that the rebate program is in place. We need to hand it to the government for doing something that tries to assist businesses that are out in the rural areas and along the rivers in the province," says Brock.

Brock Curtis has the following report of conditions on the river:

"The water is certainly low, and there hasn't been much rain, but lots of Atlantic salmon in the river. I hear reports and have seen salmon swirling in the Quarryville, Blackville and Cains. I was teaching a lesson in spey casting and saw a dozen salmon out in the river.

"It really is encouraging to see the number of Atlantic salmon moving in."

Brock did have some comments on the reports from the Dungarvon protection barrier:

The Dungarvon is not a good index river for the main part of the Southwest Miramichi. Mostly it will measure salmon moving up into the Renous branch.

We need real river by river evidence to understand the stocks in rivers like the Cains. 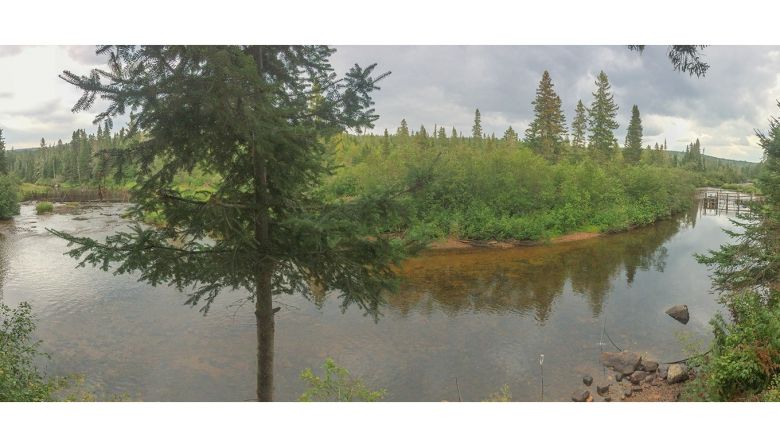 The protection barrier on the Dungarvon River holds salmon migrating upstream until the fall, keeping them out of the reach of poachers until they are released at spawning time. It also serves as a counting site for Fisheries and Oceans Canada. Nathan Wilbur/ASF
Dungarvon Protection Barrier 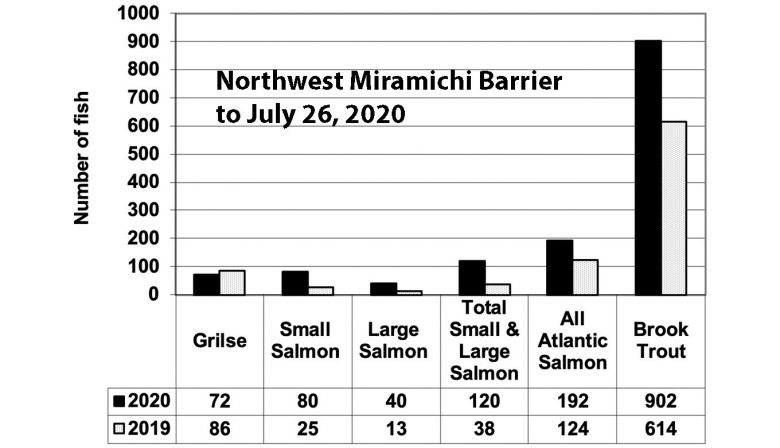 Generally the water levels are low, and water temperatures are up. DFO in Newfoundland is doing a good job of getting out information from their counting facilities, even if they were installed late due to restrictions on movement required during the pandemic.

This means some counts appear lower than last year, but this may not reflect actual migration numbers. DFO scientists will evaluate the totals at the end of the season to determine the effect of the late fence installations. 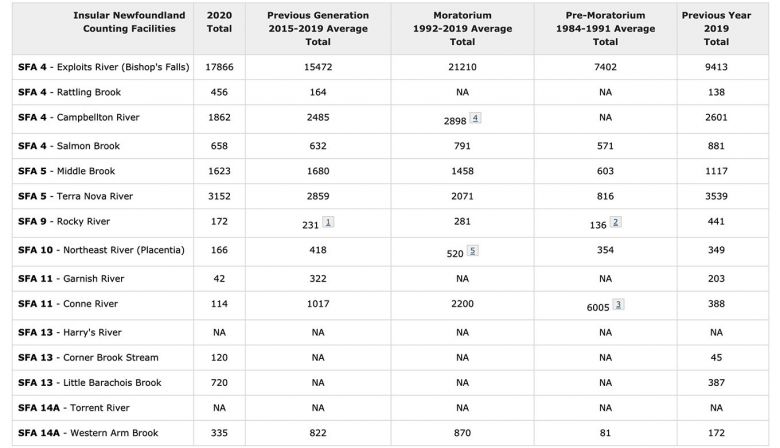 DFO Newfoundland and Labrador fishway counts to July 26th.
Exploits
After a relatively rotten 2019, the Exploits River is posting good numbers for 2020, inching toward the high levels seen since 2011.

"This was an amazing day to be checking the Corner Brook Stream trap with six fish showing up. They like to move when the water is a bit murky. I believe this salmon is the biggest we have ever had. Estimated length is about 38" (96.5cm) putting it at 22 lb (9.8 kg). 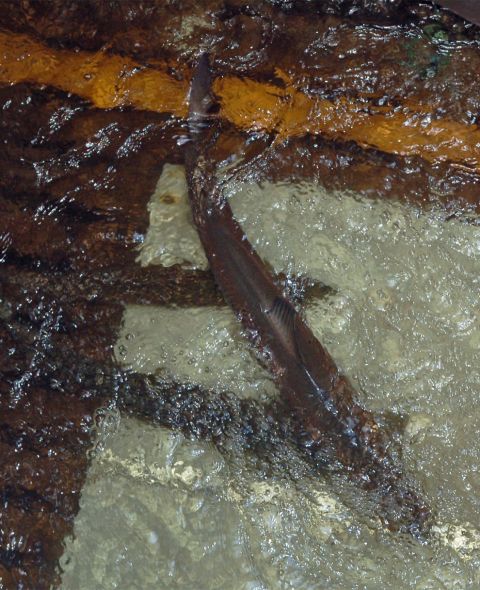 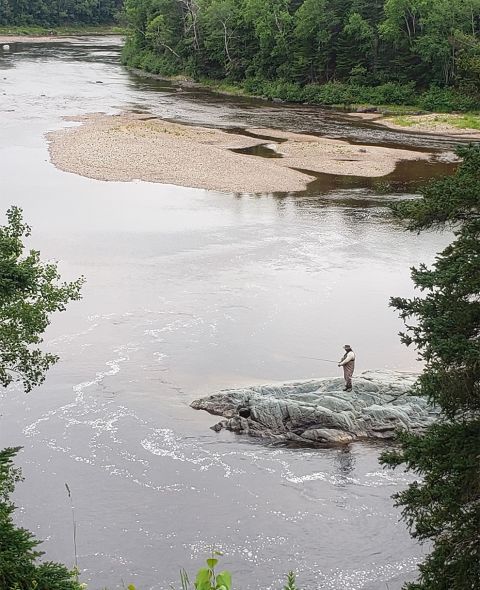 Indian Brook, near the community of Springdale, is low like most Newfoundland salmon rivers, but is still holding good numbers of fish. Photo Ralph Hiscock
Don Ivany, ASF Director of NL programs, writes:

"Low water levels and high temperatures have been the experience for most anglers in Newfoundland and Labrador this week. In addition, many rivers have already surpassed their peak run times meaning fewer fish are now being observed. With a few exceptions, people province-wide are reporting that angling has gone from extremely good to very poor in the past few days.

"These conditions have led DFO to impose warm water rules, restricting angling on many rivers to the morning only. close a number of rivers which are now restricted to morning fishing only.

"Rain is in the forecast for much of the province next week, so hopefully this will improve water levels and cool the temperatures down.

"There are still good reports coming from the Gander River and Exploits River where water levels and temperatures have been more favourable resulting in some good fishing."

For information on warm water restrictions and closures visit: https://inter-j01.dfo-mpo.gc.c...

The three active counting facilities in Labrador are showing improvement over 2019. 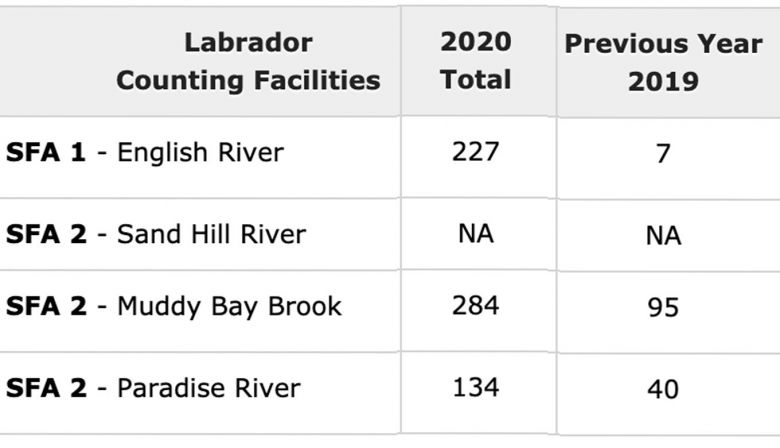 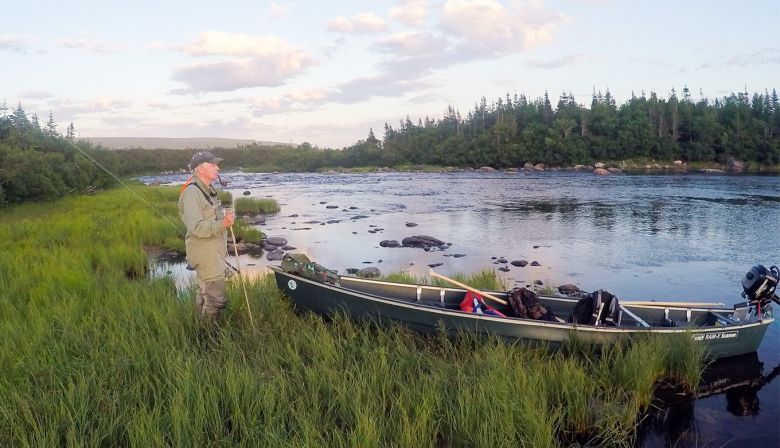 Salmonid Council of Newfoundland and Labrador President Leo White looks over Army’s Pool on the Forteau River, Labrador, in anticipation of an evening fish on July 21, 2020. Don Ivany/ASF
Don Ivany reports from Labrador:

I vacationed last week in Southern Labrador and managed to spend a little time fishing on the Forteau, Pinware, and St. Charles rivers. Action was extremely slow on all thee and very few fish were observed. Reports indicate the same for Mary’s Harbour River as well. Water levels were low and water temperatures were pretty warm at the time. 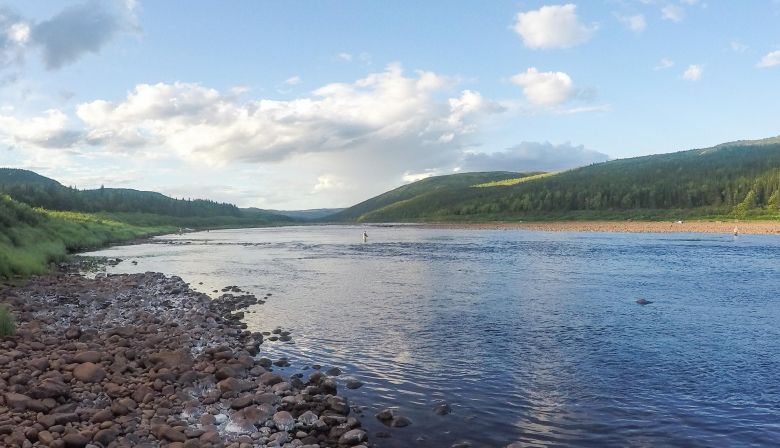 ‘The Flats’ on the lower section of the Pinware River in Southern Labrador, on 22 July 2020. Don Ivany/ASF
Eagle River

"The river is now the lowest we have seen it for years during our fishing season, and it is a nice treat. It makes for slightly more difficult navigation, but good fishing. There's not a ton of fish in the river, but they are holding up quite good in some of the top pools, and fresh fish continue to trickle in. Reports from net fishers in the bay indicate that there are still plenty of fish in the salt water so we expect some good fishing for a while yet.

"Our departing group had a great week. Water was warm and days were bright but between a group of seven, I overheard them say they hooked over 80 fish, and 2 others here reported their best success in 5 years. That's all good with us and it's always good to hear them ask about dates for next year when they board the plane.

"The weather has cooled and with that the water has dropped back to around 64-65F. We had a new group arrive yesterday and they've already had some success. One boat in their first half day of fishing got into six fish so that's a pretty good start for them. There were some hard rain showers so we hope the river level just maintains now." 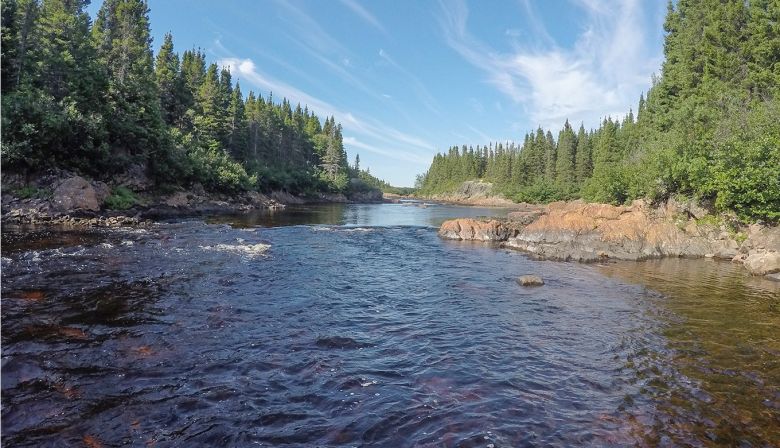 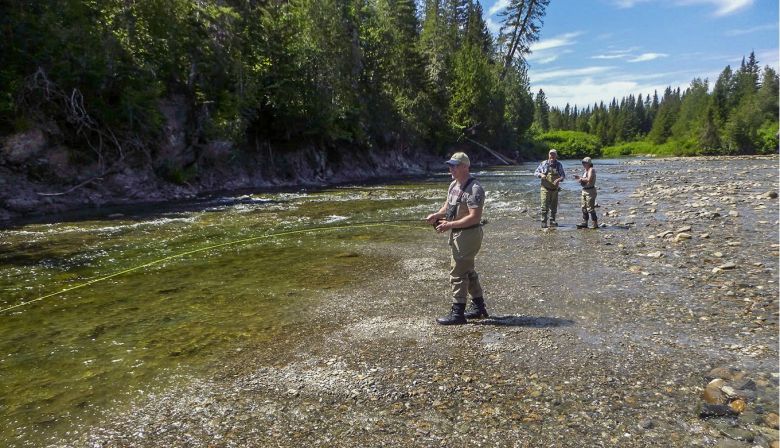 "At time of this report, water levels are still extremely low and water temperatures on the high side on most rivers. But a glimmer of hope for precipitation in strategic places such as Murdochville and Amqui in the Gaspé and Fermont on the North Shore will hopefully bring needed water to our rivers soon.

"This is the time of year when in-river counts are being performed to ascertain abundance which could allow harvesting of large salmon on certain rivers as of August 1st as stipulated in Quebec's Atlantic Salmon Management Plan. A healthy increase in the number of grilse compared to last year is being observed.

NOTE: Reminder to anglers fishing Quebec Rivers to take the time to report your releases to have the most accurate angling statistics and for the river managers to accurately calculate angling success.

ESSENTIAL ANGLER TIP: In warm water, keep the amount of time your fish is on the line to a minimum and please keep them in the water during the entire release process. There is no pre-set amount of time prescribed to release a fish, it will tell you when it’s ready to go.

Facts used in the Quebec river notes are sourced from various river websites, social media and Quebec government sources. Information can change without prior notification regarding prior year comparative figures.

The in-river counts were performed on the three Gaspé rivers. The results indicated enough abundance to permit a harvest of a quota of 50 large salmon on the St-Jean, 35 for the Dartmouth and 70 for the York.

The most up to date angling results are available at:

Water levels are very low presently, consequently angling success has slowed down due to the present conditions. The in-river count is being undertaken to assess if enough abundance is present which would permit the harvest of large salmon has been completed. Results have not yet been released.

632 fish have been reported landed to July 26th for the season including 468 salmon released and 164 grilse harvested.

The number of fish migrating back to the Mitis this season continues to very encouraging.

Also, to date for the 2020 season, 136 have been reported landed including 68 salmon released and 68 grilse reported harvested.

To July 27, 2019, a total of 194 fish had been counted through the fishway (77 large salmon and 117 grilse). Regarding captures, 33 fish had been reported landed including the releases of 13 salmon and 1 grilse.

The mid-season count was performed from July 27 to 29 and revealed 1,106 salmon and 429 grilse for a total of 1,535 fish. Also, 6 striped bass were observed in the system (Sectors B1, B3, B4). The mandatory release of large salmon will continue until the season end on September 30th. 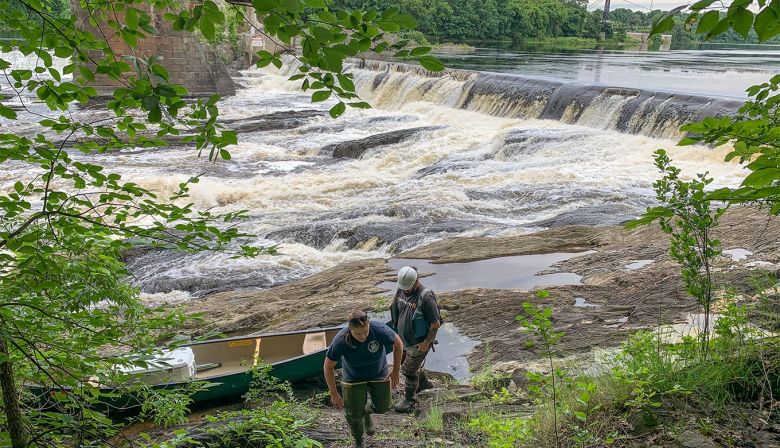 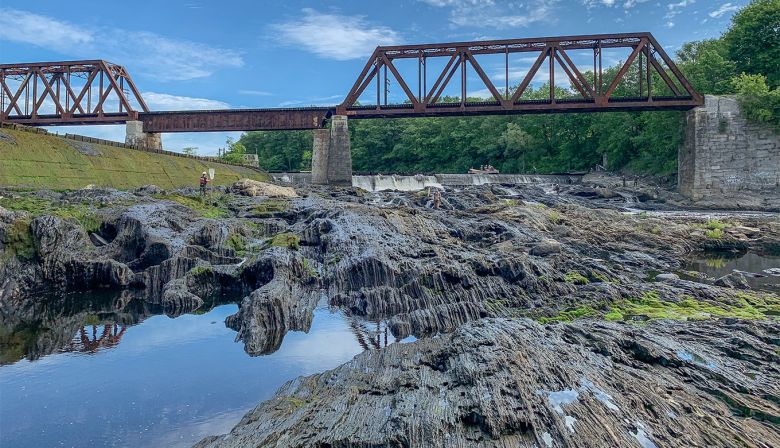 At low water the rocks below the Lockwood Dam are searched for any trapped Atlantic salmon. Photo Emma Christman
Kennebec

Last Wednesday, DMR asked me to fill in for (the other) Christman during the annual inspection and repair of boards at Lockwood dam in Waterville, when the water level is dropped as far as possible.

I worked with Jen Noll and Cassidy Bigos as well as Jay and a crew from Brookfield Renewable Partners, as well as a handful of people from Maine Inland Fish and Wildlife to locate stranded fish as they lowered the water in the ledges.

We only found one salmon, as well as a brown trout in the pools. The brown trout was released back into the river and the salmon was taken to the Sandy River that afternoon.

I believe this salmon was a 76cm male. He was scarred and had definitely spent time in the rock ledges. He did make it to the Sandy River and was released into better habitat.

The Lockwood Dam on the Kennebec where it passes through Waterville is the first major barrier migratory fish encounter in the river system. Photo Emma Christman
Temple Stream

"Here is a recent photo of electrofishing the work site in Temple Stream watershed.

"We are preparing to replace a culvert on this cold-water tributary and staff from Maine's Department of Marine Resources cleared the site prior to work beginning in the water.

"The two culvert replacements will improve passage for over six miles of stream and are part of the larger Temple Stream Project that includes the Walton’s Mill Dam Removal." 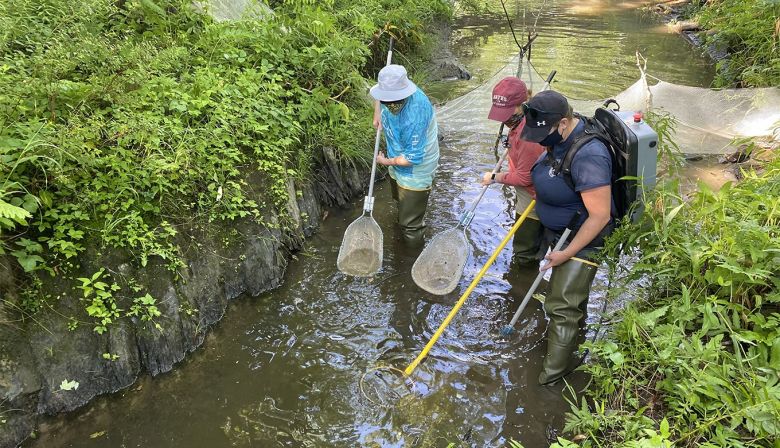 "A total of 218 fish (187 MSW and 31 Grilse) have been sent to Craig Brook National Fish Hatchery for Broodstock.

"Counts have not been adjusted for in-season recaptures based on PIT Tag, Radio Tag, or proration. Counts will be adjusted as data become available." 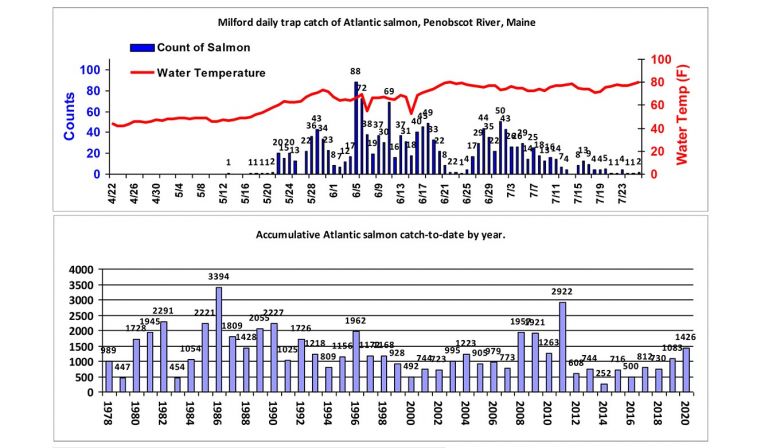 Due to low flows and high water temperature (~27C) we have lifted our trap and allowed returning salmon to swim freely into the river this week.

No new salmon were captured last week prior to temporarily suspending trapping. 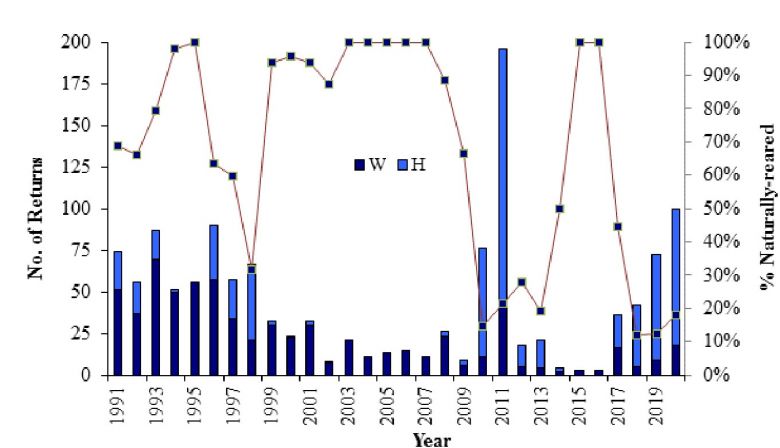 Poaching and Lack of Enforcement a Major Issue in 2020

Anglers and river watchers continue to report numerous incidents of poaching and illegal fishing in salmon rivers, particularly in the Restigouche and Miramichi watersheds.

Poaching is a perennial problem that requires the attentiveness of conservationists to report, and robust provincial and federal enforcement to investigate and prosecute. Unfortunately, the resources brought to bear on this criminal activity is not what it was in the past.

Check out this article from August 1977, printed in New Brunswick's Telegraph-Journal, where dozens of provincial and federal enforcement officers launched an anti-poaching blitz on the Magaguadavic and Digdeguash rivers in the southwest part of the province.

Stopping the poaching that is harming salmon populations today will require a combination of denunciation and deterrence. A strong show of force from federal and provincial officers in Eastern Canada would surely be welcomed by the conservation community.