Dramatic colours and hopes for a good spawning year 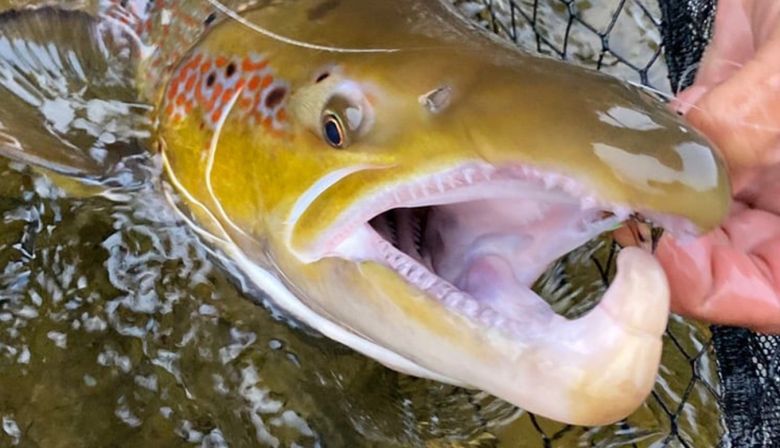 Late season male Cascapedia salmon showing the triangle-shaped teeth and well developed kype. Photo Dan Greenberg
In the natural history of Atlantic salmon, mysteries get piled upon mysteries. When these fish are at sea, they have needle-like teeth that are perfect for grabbing prey, whether capelin, young boreo-atlantic armhook squid, or other prey.

But when the Atlantic salmon return to freshwater, those teeth fall out, and they grow an entirely new set of teeth that are triangle-shaped.

The reason is not known, except it likely goes back to a previous need at some point in their evolution. The puzzle deepens with the fact that Atlantic salmon do not eat when they return to fresh water. In fact in some situations such as in the Ponoi River in northwest Russia, the salmon can go as long as 22 months without eating. So, why the teeth?

A related question is where the Atlantic salmon get the calcium that goes into the building of these triangle-shaped teeth, as well as calcium needed for the bone needles that form the structure of the kype and bulbous nose in the males since they are not eating. The calcium needed is reabsorbed from the scales, an elegant solution to a changed need of the fish.

Just one more mystery of a species that is charismatic partly because it is so rich in mysteries.

Incidentally, a reminder that while Atlantic salmon can survive the rigours of spawning when the Pacific salmon species do not, it isn't every Atlantic salmon that is able to go on to return to the sea, either immediately or after a winter spent in freshwater. The rate of survival to return to the ocean will vary from river to river, and likely also in the yearly conditions. One might project that it would be no surprise to have a lower survival this year in the multitude of watersheds that continue to have low water. The effort required to reach spawning areas and to conduct the spawning activities is bound to reduce the survivability of the fish.

As to actual survival, it should be no surprise that after a migration of 3,000 km, and adversity in freshwater, perhaps 30 per cent are able to survive and become "kelts".

Autumn on the Ste-Marguerite River. Photo Marc Gauthier
Charles Cusson, ASF Director of Programs for Quebec, looks at the end of the season in Quebec:

The season ended on Wed., Sept. 30. Mother Nature brought rain to the Gaspé and Lower St-Lawrence regions on the last day of the season which should help maintain levels into the spawning periods.

Overall, for 2020, most rivers have reported increases in the number of large salmon and a significant increase in grilse abundance, but with variability in that increase. The figures presented in this report are based on preliminary numbers provided by river managers. The official data will be available in February 2021.

Data accumulated during the 2020 season which ended on Sept 30. paints a very encouraging picture, especially in the number of grilse.

An uptick in the number of fish landed also occurred in 2020.

Angling action on the Mitis was very good right until the end of the season with salmon being landed in all sectors of the river. The Mistigougèche tributary performed well during its inaugural season which ended on August 30th.

The last in-river counts were completed in September and indicated the following:

Big Hole on the Renous River. Water still lower than desired. Photo Paul Elson
The rivers may have cooled down, making the Atlantic salmon more comfortable, but there needs to be more rain. Water levels in New Brunswick rivers make some of the spawning tributaries hard to reach.

The colour has come back into the water of the Northwest Miramichi, but not so much in the Little Southwest. Overall, the water is still very low.

The salmon fishing is still extremely slow. I’m still just seeing the odd fish here and there but there has been no “Fall Run” that I have observed so far.

Water is cooled to less than 10 C as of Monday..

I released a grilse Monday morning on the Little Southwest, and it was the only fish I saw. I made a trip over to the Renous on the weekend, but there was not enough water there to hold a fish.

Stephanie and I each hooked a grilse on the evening of Mon., Oct. 5 in one of the upper pools on the Northwest Miramichi. Both were old summer fish. There is probably not enough water on the Northwest at this time for the salmon to make it up river very far.

Lots of striped bass in the Redbank area. Some are being caught on “sand eels”, some on bait and some on flies while trolling.

Angling on the Southwest Miramichi in the past week. Photo Geoff Giffin

A cold morning on the Little Southwest Miramichi on Oct. 5. Photo Paul Elson

Sunset this week on the Northwest Miramichi. Photo Paul Elson

Now a Series of Headponds

The Saint John River, or its Maliseet name “Wolastoq”, is no longer a river, but a series of headponds behind several significant hydro dams.

It is disheartening to see such a mighty river’s ecology and hydrological function so affected by dams. There are a few places along the river – downriver of a dam but upriver from the influence of the next headpond – where one can get a glimpse of the free flowing river with its gravel bars and runs and natural character of the river. One such place is around Florenceville (see photo), near where the Monquart stream enters the river. A heavy flow of water spills over the gravel bar in a run of water where surely many salmon have been caught over the generations. Hydro dams provide renewable electricity, but they’re not green.

I continue to hold out hope that with the advancements in new green technology and better storage, society’s need for these mega structures will be less and less, and they can be removed to restore natural function in rivers like the Saint John.

Geoff Giffin notes that in the past week the level of the river has come up with some badly needed rain.

There are few rivers prettier than the Margaree in early October, with autumn leaf colours and often dramatic lighting to contrast with the river. Nathan Wilbur/ASF
ASF's Nathan Wilbur was on the Margaree River this past weekend.

My wife, Julia, and I spent the week exploring beautiful Cape Breton and some of its salmon rivers while on vacation last week.

Most time was spent on the Margaree where we were charmed with its wonderful mix of river meandering through a valley enclosed by rugged hardwood mountains, fertile farmland, and a healthy Atlantic salmon culture.

We felt like we’d stepped back in time and loved it.

Although the water was low, we explored and fished the upper pools characterized by boulders, bedrock and faster flowing water, all the way down to the slow flowing river in the lower valley where the tide meets freshwater and salmon are fresh from the sea.

Hurricane Teddy had brought a good raise in water and some great fishing, but as fishing goes, “we should have been there yesterday” because the water had dropped right back to its low level and fishing slowed.

We did see many fish in the river, mostly large salmon, biding their time in the deep, slow pools waiting for a raise in water to continue upstream. We were content to slow down the pace of life, spend some time on the river, and scout which pools to revisit on our next visit.

This past weekend on the Cheticamp River in Cape Breton. Nathan Wilbur/ASF

Very low water on rivers will impact success of Atlantic salmon reaching spawning streams. Here Head Tide Dam on the Sheepscot shows the very low water level we have in Oct. 2020. Maranda Nemeth/ASF
All of Maine's watersheds need more rain, and they need it desperately. The photo above, on the Sheepscot, shows how low the water is. So too does the photo below of where Baskahegan Stream enters the Mattawamkeag, part of the Penobscot Watershed.

Outlet of Baskahegan Stream into the Mattawamkeag, in eastern Maine. Maranda Nemeth/ASF

Sandy River, a tributary of the Kennebec watershed, again showing the low water of recent days in 2020. John Burrows/ASF

During my trip to PEI last week I was able to get out with a number of groups from across the Island and wet my line along the way.

The Morell River rose in response to Hurricane Teddy but quickly fell again. It seems that like many other rivers on PEI and in NS this wasn’t enough to bring in the fresh salmon that I saw jumping in the estuaries.

As I was leaving the Morell River I had a chance to stop by Grants Bridge, a popular salmon angling location on that river, and speak with a couple of anglers. There was a number of rainbow and brook trout around but it didn’t seem like there were many salmon in the river.

From that conversation and others that I had during my trip it sounded like few if any salmon had yet to be landed on PEI. In fact most of the chats I had ended talking about Alan Mills’ catch of a tagged salmon during his recent trip to the Margaree.

However, having few to no salmon at this time of year is not uncommon as the Atlantic salmon runs in many of our Northumberland Strait Rivers, especially those on PEI, usually don’t improve until later in October. Many groups on PEI were either busy wrapping up juvenile assessments or were starting their preparations for their fall adult assessments. As such, groups like the Abegweit Conservation Society and Morell River Management Coop, which are partnering on a PIT tagging population dynamic project on the Midgell and Morell rivers, and the Souris and Area Branch of the PEI Wildlife Federation only put their fish traps in this week.

Anglers at Grants Bridge on the Morrell River, PEI on 1 Oct. 2020. Kris Hunter/ASF

Compared with much of the rest of the Atlantic salmon range in North America, the Newfoundland rivers have had more water, and better conditions for the last of the angling season and a lead into the spawning season.

Don Ivany, ASF Director of Programs in Newfoundland and Labrador has some quick notes on the three rivers still open:

Water is still high on the Gander and things have been slow. The Exploits has good water levels but it has been slow this past week. The Lower Humber has good water but according to reports it’s been rather slow for the past week.

He adds that it has been slow except for the sensational Atlantic salmon that came the way of Kastine Coleman. See below

Kastine Coleman with a gorgeous 35 lb. Atlantic salmon in the lower Humber River.