May 3, 2019
Proper live release is a skill, and people benefit by refreshing their knowledge every year. It's most important to keep fish in the water as much as possible - in other words 'keep 'em wet.' This video is a good guide for people learning the art of live release, or just wanting to brush up on their skills.
There has been extensive research on live release and governments around the world embrace it as a conservation technique. Here two interesting studies:

• A 2017 review of live release studies from 12 rivers involving 512 salmon found a 96% survival rate for fish caught on a fly.
• A 2013 study that looked at every returning adult to the Escoumins River in Quebec found "C&R salmon had the same probability of reproduction as non-caught salmon."  study in Quebec showed that live-released Atlantic salmon were as successful as other salmon in spawning, and spawning success

For people interested in learning more about live release and how it is practiced around the world, visit this excellent resource - Keepemwet Fishing. 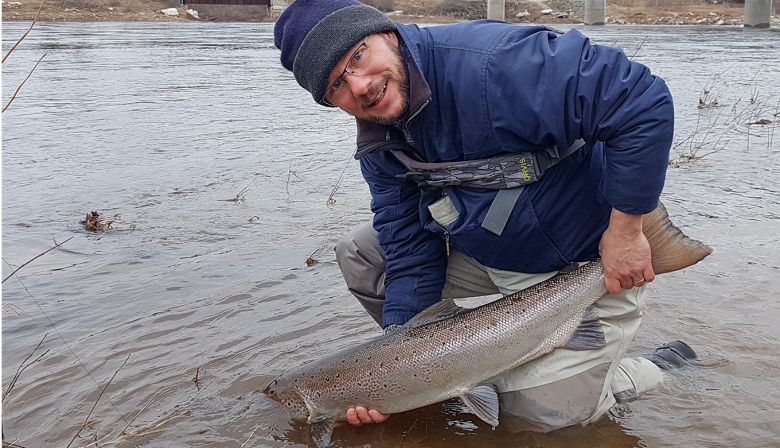 Paul Elson has a good looking Atlantic salmon in the Quarryville area on the Southwest Miramichi, from 29 April, 2019. Photo Howard Gould 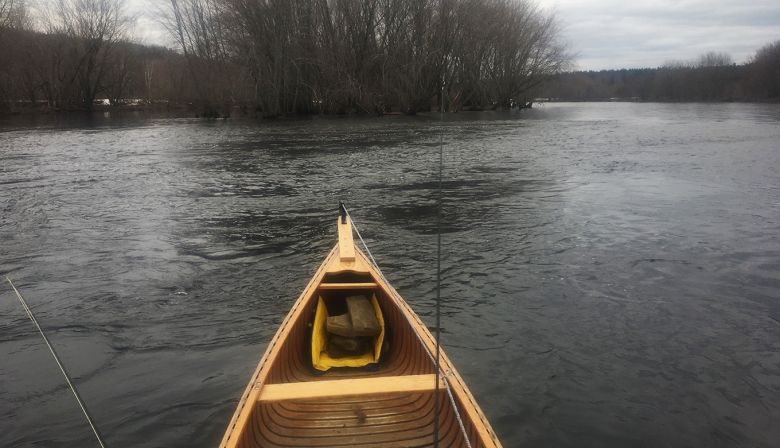 On April 26 the Southwest Miramichi River near Boiestown still had high water, but this week the levels are dropped significantly. Nathan Wilbur/ASF 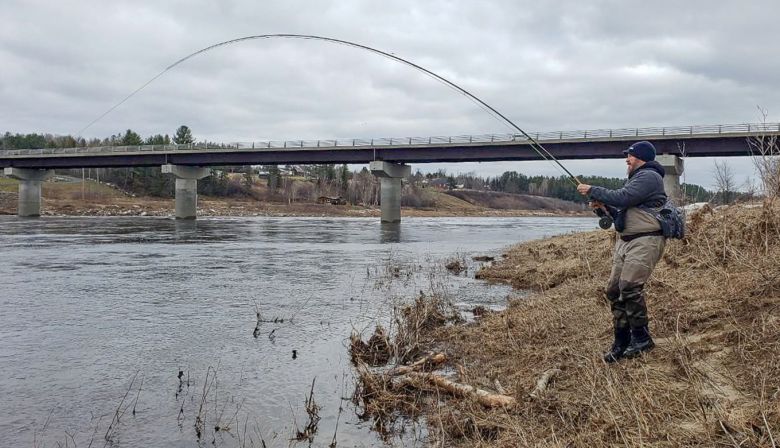 Howard Gould works an Atlantic salmon from the river bank near Quarryville on the Southwest Miramichi. The season has begun! Photo Paul Elson
Brock Curtis of Curtis Miramichi Outfitters notes:

We had good fishing later in the week last week. Saturday brought rain and raised the river bringing grass, etc. down the river. Things picked up again on Monday and the angling has been quite good in some areas.

We have heard from a few anglers coming into the tackle shop that they landed large sized trout below Blackville. The smelts are gradually making their way upriver and are now in the Quarryville area. More salmon fisherman are in the area and each day brings more reports on the river. The forecast is for good weather over the next couple of days so the angling should remain good for some time.

Atlantic salmon are starting to take flies, and Wednesday was the first day of trout season as well. There is still significant bank ice, one of the reasons the water temperature remains quite cold. But the ice on the river has "run out", and conditions should be getting better for anglers.

Striped bass are taking good down river from Strathadam and right into the City of Miramichi. 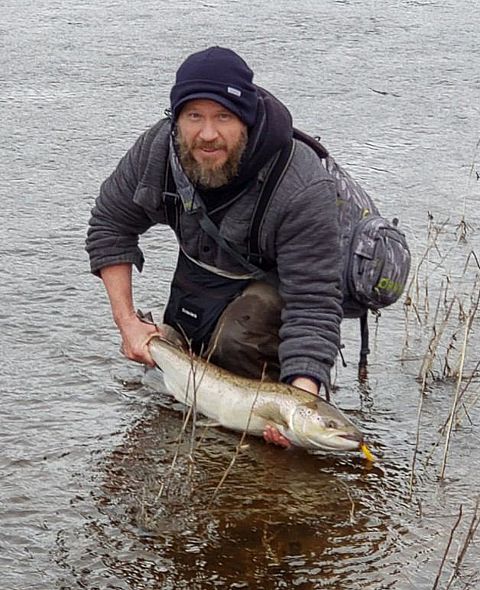 Howard Gould prepares to release an Atlantic salmon on the Southwest Miramichi near Quarryville, in late April, 2019. Photo Paul Elson 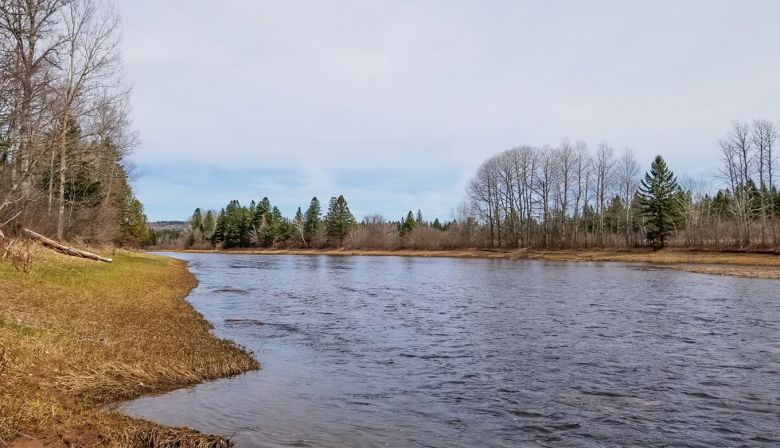 The Hammond River, like most waterways in southern New Brunswick has been high, but the water is now falling. Photo Andy Miller 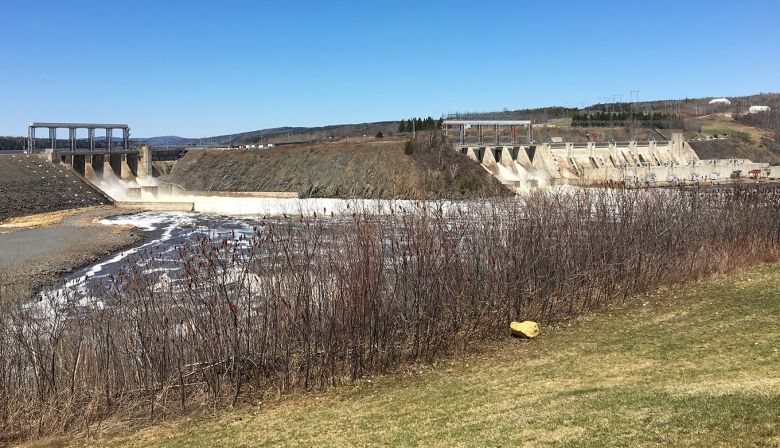 The Mactaquac Dam on the St. John River above Fredericton had floodgates wide open on 30 April, 2019. Nathan Wilbur/ASF 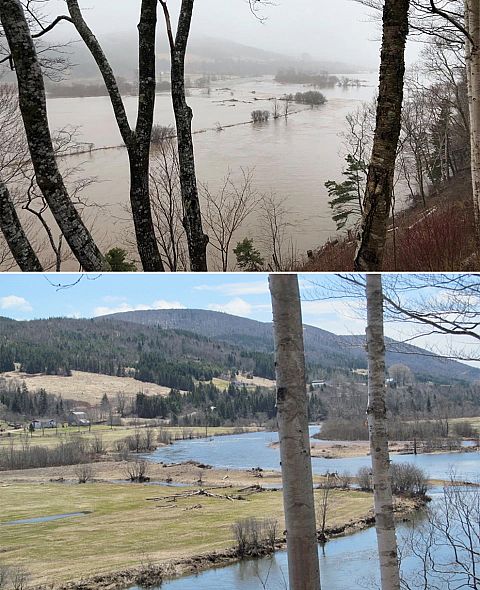 What a difference a week makes. The top photo of the Northeast Margaree was taken April 24, 2019, and the lower image on April 30, 2019 when the river had largely retreated to within its banks. Photos Greg Lovely
Greg Lovely writes:

The water is still high but you can at least make out where the river is now. It has been a very cold spring....and windy.

Our marked kelt recapture program was somewhat successful considering we had to dodge huge chunks of ice floating down the river. There were a lot of seal sightings in the middle part of the river for weeks on end. I'm sure they did a number on the poor kelts trying to work their way down and out of the river.

I have seen some nice big brook trout and brown trout caught in the tidal section of the Margaree river. 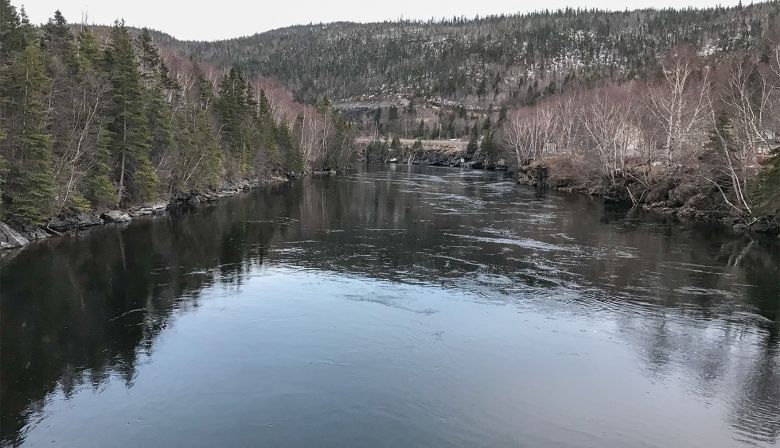 Lower Humber River above Ballum Bridge shows there is still significant snow in the forests as of 2 May, 2019, when the photo was taken. Don Ivany/ASF
Don Ivany, ASF Director of Programs for Newfoundland and Labrador, writes:

We are having a very late spring over here and we still have lots of snow and cold weather. For example, on Tuesday night we had MORE snow again in Western Newfoundland, with greatest amounts in the Gros Morne area and on the Northern Peninsula. Most ponds and lakes are still covered with ice. People are still snowmobiling in some areas.

The situation is even worse in Labrador where two nights ago the temperature in Labrador City was -19 C. They have also been having lots of snow up that way. Meanwhile, the sea ice conditions have been rather heavy along the Labrador coast and remains so in some areas. Even on the island the north coast is blocked solid with sea ice.

Coming from this, we can draw some conclusions:

On the negative side there is a correlation between years with heavy sea ice and poor survival rates of salmon, meaning low returns to rivers. It also means salmon are usually a couple of weeks later returning to rivers than normal.

Also, where there is thick sea ice there are usually many seals resulting in increased Atlantic salmon predation.

On the positive side, lots of snow and a cold spring usually means slow runoff which results in good river water levels and cool temperatures, at least for the first part of the Atlantic salmon angling season.

These are the predictions we can make - but we shall see how things unfold in the next month or so.