May 30, 2019
Check out ASF's State of Population 2019 Report, first Quebec report of the year, and cold conditions everywhere 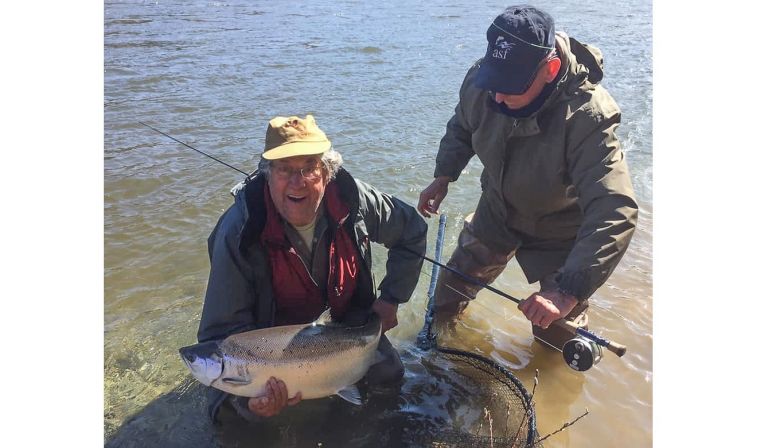 Check out ASF's State of the Populations 2019 report, our annual roundup of facts related to the 2018 year from published scientific literature. Overall there was a decrease in harvests and in many areas some improvement in returns, although that varied. Click here for the report:
https://www.asf.ca/assets/files/state-of-popn-2019v2.pdf

The principal source of information is the ICES report, which is generated in advance of the NASCO deliberations taking place next week in Tromso, Norway. 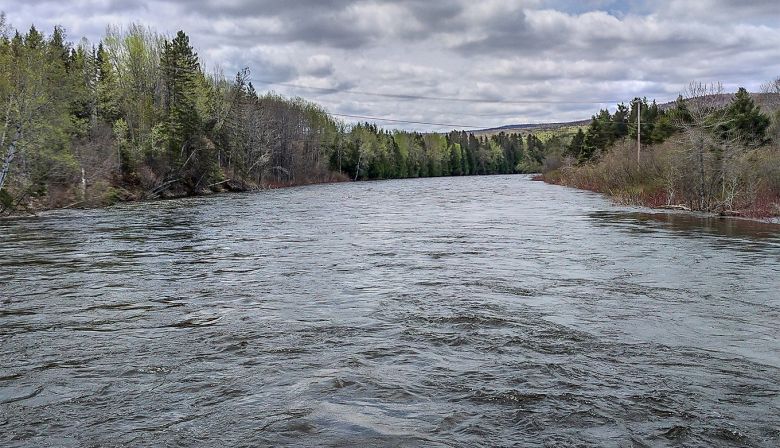 Water continues to run high and cold. In this case it is the Matapedia River as seen from Heppel Bridge. Charles Cusson/ASF
Most rivers open their season on June 1, but angling started as of May 15 on the Causapscal and Matapedia Rivers and as of May 25 on the Moisie, York, Dartmouth and St-Jean rivers. A few fish have been spotted and landed to date, but river levels have been dropping fast! Next 2018 season opening dates are June 15 and July 1.

2019 marks the fourth year of the 2016-2026 Atlantic salmon management plan in Quebec. Except for six rivers, Causapscal, Moisie, Natashquan, St-Jean (North Shore) as of June 1, York and Patapedia as of July 1, all large salmon must be released until a mid-season abundance assessment can be made.

The number of large salmon making it to spawning areas did increase in 2018 due to the new permit structure being introduced and the fact more anglers are releasing their catches voluntarily. A retention license is issued with 1 tag for a large salmon and 3 grilse tags. Combined with the management plan, this translated into 961 large salmon being reported harvested in the sport fishery. The number of fish reported released in 2018 totaled 11,219 (salmon and grilse). Approximately 17% of total represents released grilse.

The first three years of the management plan has resulted in a 45% reduction in the number of large salmon being harvested compared to the five years prior to implementation in 2016.

The English version of the management plan is available at
http://mffp.gouv.qc.ca/wp-content/uploads/PG_saumon_ANG.pdf

As of this ASF RiverNotes report, water levels are mostly on the high side but dropping quickly. On the three Gaspé rivers, flows are high, thus limiting angling opportunities. The North Shore rivers are flowing at their usual “torrent” levels for this time of the year.

Reminder to anglers fishing Quebec Rivers: take the time to report your releases to have the most accurate angling statistics and for the river managers to correctly calculate angling success. Tight Lines! 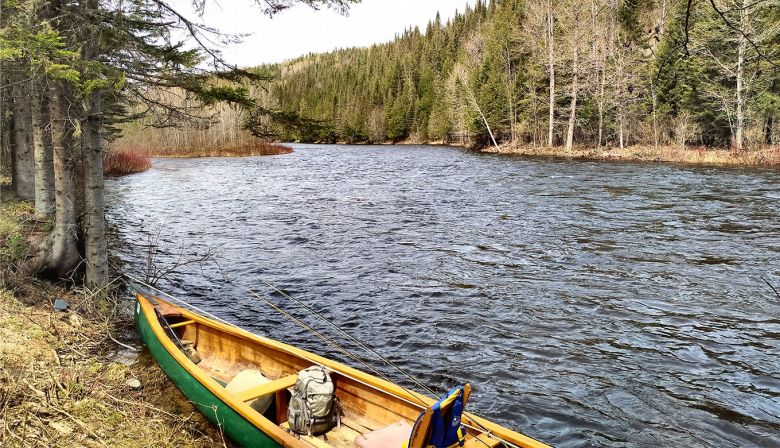 On Sector 1 of the Causapscal River on May 25. This river is noted for an early run, and one that has some very large salmon. On some day in early June, Atlantic salmon leaping at Causapscal Falls will be incredibly impressive. Charles Cusson/ASF 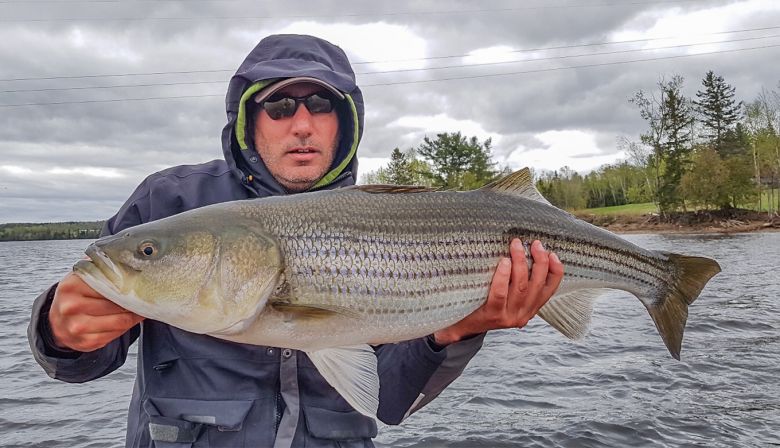 This past weekend was quite hectic here on the Miramichi. A large number of anglers taking part in the Bass tournament were in the area. This is a large event that keeps growing each year. From what some of the anglers are saying the Striped Bass fishing was quite good in some areas. One has to see the river boiling in Striped Bass to believe the numbers. If you haven’t seen this before it is well worth experiencing.

There also continues to be Black Salmon caught above and below the Blackville area. Not large numbers but anglers who are fishing for them are still landing a few.

A number of anglers coming into the tackle shop are having success with dry flies when fishing for trout, and finding some larger trout. We heard Sea Run Trout are being caught in the Boiestown area so they are probably moving upriver now.

Tributaries are still good for canoeing and anglers are now taking advantage of the trout fishing and camping from canoes. Though we have had quite a bit of rain the underbrush is quite dry so caution with campfires is a must.

Nathan Wilbur, ASF Director of Programs in New Brunswick has an added  perspective, related to the water temperature:

Cold temperatures delayed striped bass movement up to their spawning grounds on the NW Miramichi. Hopefully this has allowed smolt to have better survival through the estuary compared to recent years, although the smolt run is slow to get underway as well. Anglers are still catching a few kelts on the Miramichi low on the river, and are expecting bright salmon to show up shortly.

He notes that the Matapedia salmon shown at the beginning of ASF RiverNotes shows how the run has started, but was delayed by the cool conditions this year. 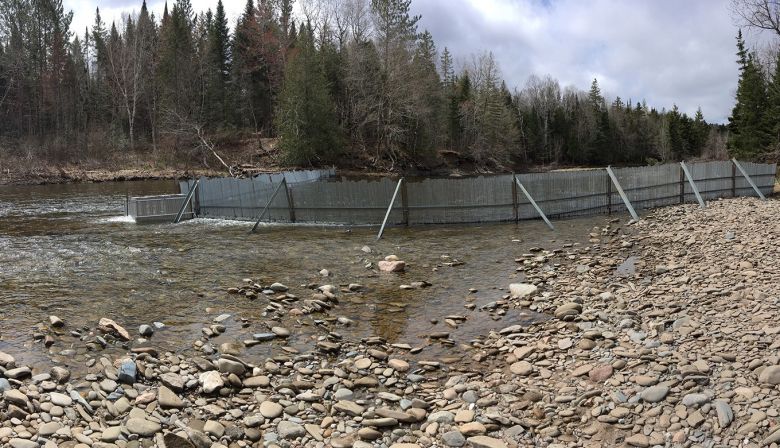 DFO has erected a new smolt counting fence on the Tay River, a tributary of the Nashwaak to better understand the run on this river. Nathan Wilbur/ASF 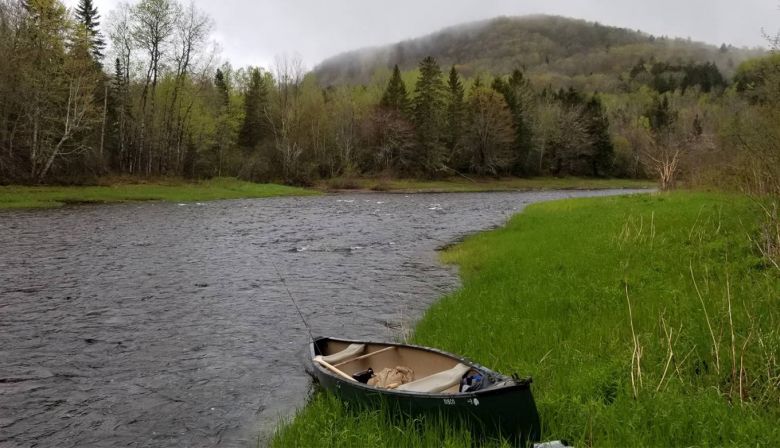 The wet and cold conditions of this may have in many rivers created good conditions for smolt heading down to the sea. This photo of the Hammond River was taking 27 May, 2019. Photo Andy Miller 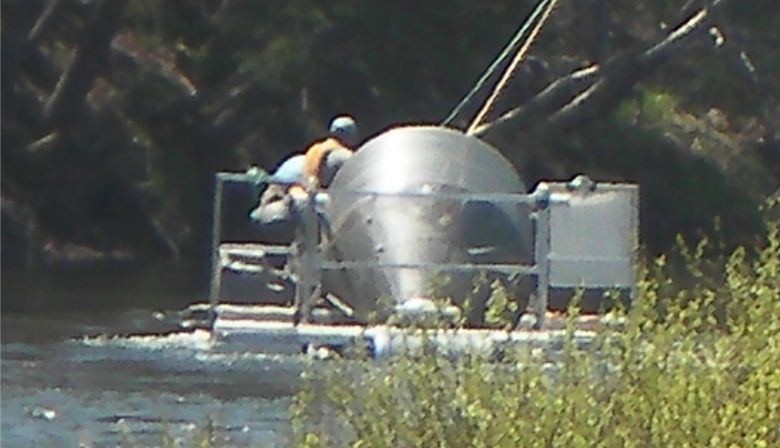 Sophie Leblanc and Larry Forsyth working the smolt wheel on the Margaree river on Wed. May 29, 2019. Smolt were definitely on the move. Photo Greg Lovely
Margaree

I was fishing a mayfly hatch and had to quit.

There were so many hungry migrating smolt, that the trout had no chance to take my fly. There are still some very nice trout being angled in the lower part of the Margaree.

The Margaree river could not be in better shape for the arrival of our Atlantic salmon.

The water remains very cold and water levels, if they stay the way they are, will allow easy migration for gaspereau, sea trout and salmon. 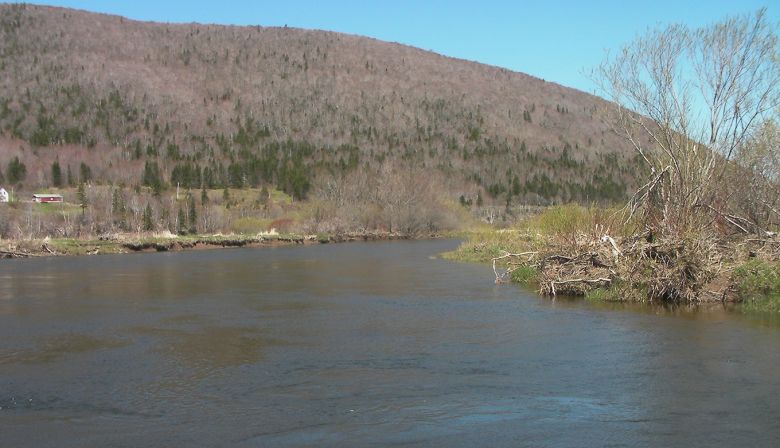 The Margaree River has been running high, with the cold, rainy conditions of recent days. This photo taken May 28, 2019. Photo Greg Lovely

Eight Atlantic Salmon yesterday. They have started to show up regularly. We are up to 24 now. The water temperature is still cool – 55 F / 13 C – and flows are still high. Last year water temp was 63 degrees. Flows are double the average – up 15,000 CFS – compared to the average for this time of year.

Robert Wengrzynek a passionate salmon person on the Penobscot has been very strong in his views that the natural passage up over the Milford barrier at this time of year is an important alternative to salmon migrating up the Penobscot, especially with the conditions of high flows we are now experiencing. His view is that as a result, the Milford fishlift counts are not indicative of the real numbers going upstream.

Is he correct? At this point there does not seem to be evidence one way or another. Certainly times of high flow through this channel will attract Atlantic salmon moving upstream. It would likely take quality ongoing video surveillance to determine this - and it would appear unlikely that is going to occur.

Eventually he would like to see the status of Penobscot salmon revisited and the endangered status downgraded, with live release angling reinstated. That would appear  to be unlikely under the present circumstances. 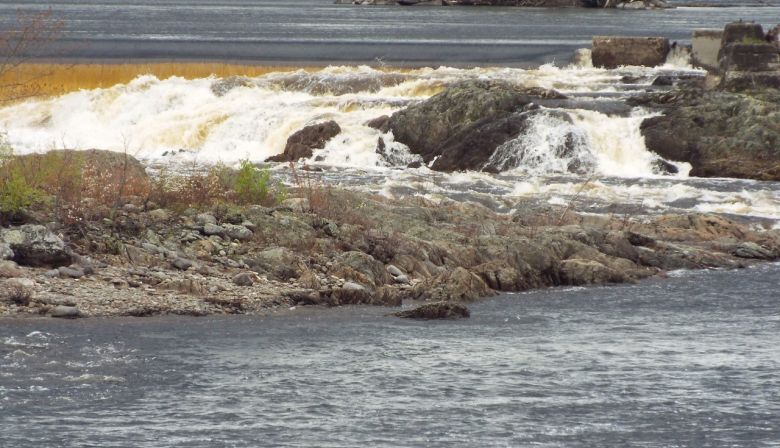 This year, with high flows, there are certainly opportunities for Atlantic salmon to surmount the Milford barrier. Photo May 24, by Robert Wengrzynek.

The Atlantic salmon angling begins this weekend, and is certainly much anticipated.

One matter generating conversation is whether or not there will be funding to support an individual to count and assess fish at Salmon Brook on the upper part of the Gander River. With the Gander being one of the most important Atlantic salmon waters in North America, and with Newfoundland assessments being vitally important, it would seem important to maintain a presence there. 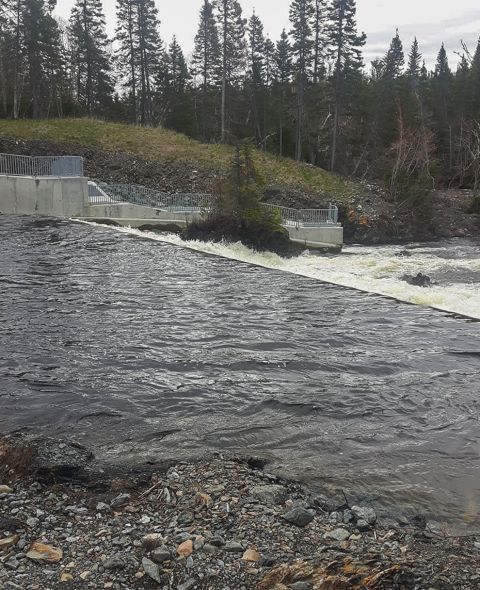 ICES, in its report, remarked again on the need for increased assessment. This is the Salmon Brook fishway on the Gander River. Photo Tony Skinner