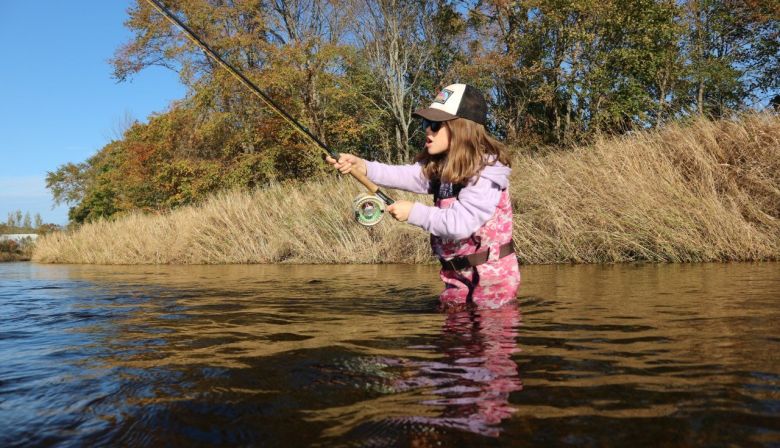 While many have packed the gear away for another year, anglers in Nova Scotia are busy making weekend plans. Saturated soil combined with recent rains have many a salmon river full and coloured. Good news for both salmo salar and the folks looking for one more shot at a fall fish.

Fisheries and Oceans Canada (DFO) is currently seeking public input, through an online survey, on the development of their Wild Atlantic Salmon Conservation Strategy. Join ASF for an informative webinar to help make your submission as strong and informed as possible. 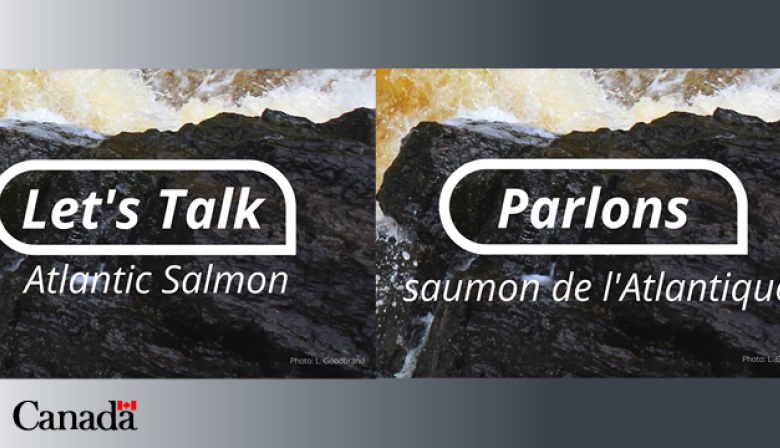 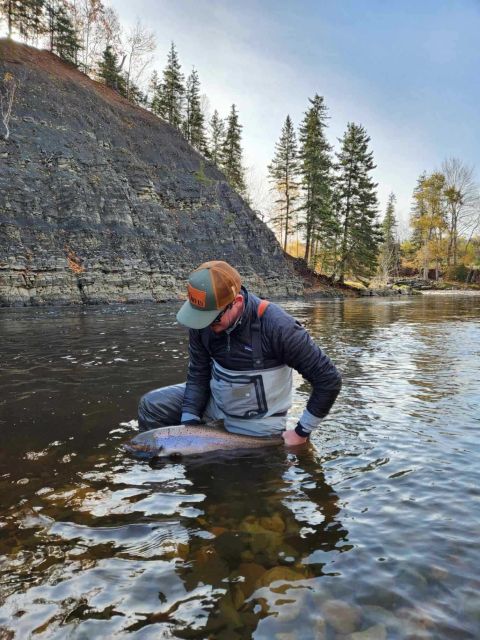 Paul Smith from Portland, ME releases a beauty at the Hatchery Pool this morning after yesterday's rain — with guide, Robert Chiasson | Photo: Robert Chiasson

Fall fishing on the Margaree in late October can be hit or miss. The summer pools that hold fish staging may now hold a few dark fish. Fall fish seem to go further up river, hold for maybe two days and then move on. Since the high water — courtesy of Fiona, reports indicate that the sanctuary pools are holding plenty of salmon. 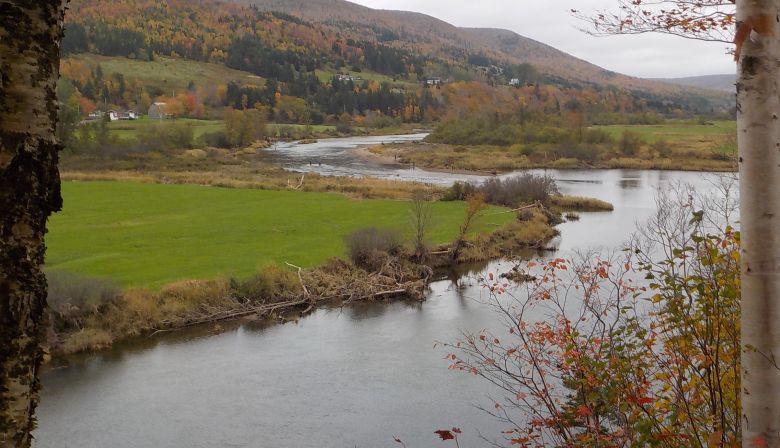 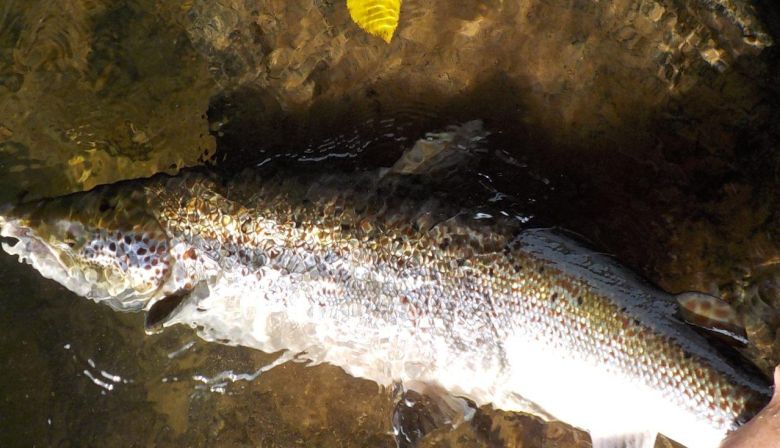 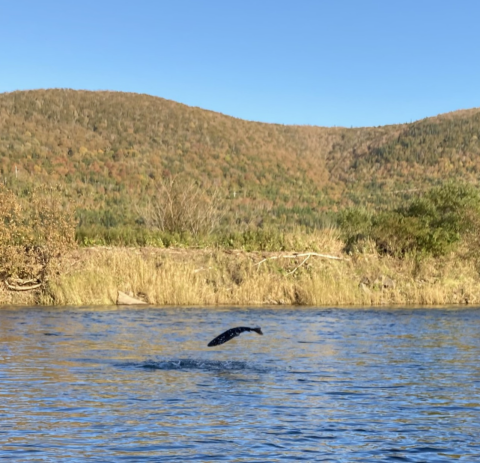 Salmon released by Joe Ravita at Long Pool on the Margaree River | Photo: Jerry King
From the desk of Brent Locke, Executive Director of the Nova Scotia Salmon Association (NSSA):

It was a privilege to attend a Salmon Ceremony honouring the life of the Plamu this past Sunday at the Stewiacke River Park. The ceremony was hosted by The Confederacy of Mainland Mi’kmaq and representing the NSSA were Amy Weston, Nick MacInnis and myself. The NSSA has always valued its close working relationship with our Indigenous partners throughout Nova Scotia, and it is this collaborative approach to conservation which led to the creation of the Stewiacke Collaborative Group in 2019.

At the initial meeting, representatives from NSSA Adopt-a-Stream, Confederacy of Mainland Mi’kmaq - Mi’kmaw Conservation Group, the Cobequid Salmon Association and DFO’s Coldbrook Biodiversity Facility agreed to meet annually to share field work results and plans, as well as to aid and support each other with projects, with the underlying objective of maximizing efforts and increasing recovery potential within the Stewiacke watershed. Co-chaired by the NSSA and the Mi’kmaw Conservation Group, this annual forum provides an excellent opportunity for continued collaborative efforts for the recovery of IBoF salmon, other species-at-risk, and improving the overall health of the Stewiacke River.

The NSSA would like to express our sincere gratitude to the Confederacy of Mainland Mi’kmaq and Alanna Syliboy for hosting such a wonderful event; Chef Ray Bear for the amazing food; Brian Knockwood for drumming and Elder Joe Francis, for not only performing the ceremony but also taking time to share some of his great hunting stories with us. Wela'lioq. 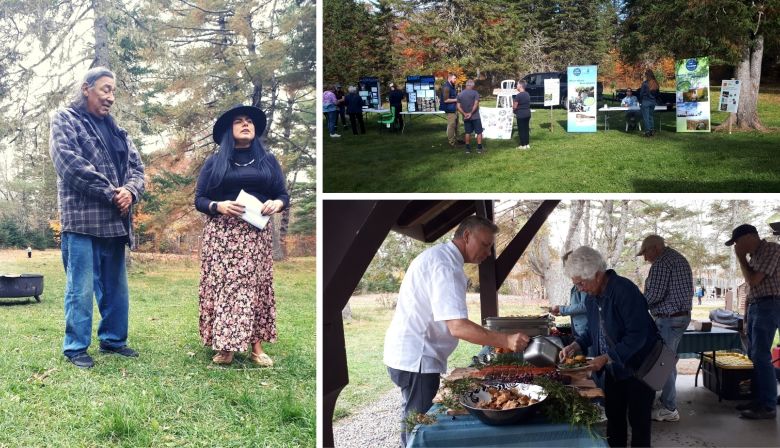 In the Field - Nova Scotia

On Monday RiverNotes Editor and NS Program Director, Deirdre Green was pleased to spend the day with The Maritime Aboriginal Peoples Council (MAPC) on the Debert River. She writes:

It was a beautiful, mild autumn day on the river this week with MAPC Project Manager, Gavin Scott and Field Technician, Christian. They invited me to join them at several sites along the Debert River to collect eDNA samples and complete routine water quality monitoring. Not all sites were easy to access complements of Hurricane Fiona's fury. However, it was a fun-filled day of learning as the three of us bushwhacked our way through the woods.

Gavin shared that the Debert and Folly Rivers are being studied to assess salmon survival as part of the project — A Comparative Assessment of Ecological Conditions for Atlantic salmon in the Northern Minas Basin Rivers. He shares:

The main aspect of the study is to compare the ecological conditions of the sites where CBF release unfed salmon fry (juvenile salmon) and its timing with in-situ incubation/emergence. During the In-Situ Egg Incubation Project, an intriguing point was raised about when the unfed fry were being introduced to the Debert and Folly Rivers. It was found that water temperature, along with a number of other ecological variables, varied significantly between watersheds in different regions of Nova Scotia.

In addition to the comparison aspect, the project aims to understand survivability of the Atlantic salmon fry after their release. Throughout the year, the project will sample factors attributing to the success of wild salmon populations, including routine water quality monitoring, quarterly water chemistry analysis, macro-invertebrate collections, habitat quality surveys, and a combination of assessments for identifying salmon populations.

Our team looks forward in observing whether positive hits for salmon DNA are detected in areas not in the vicinity of the release sites! 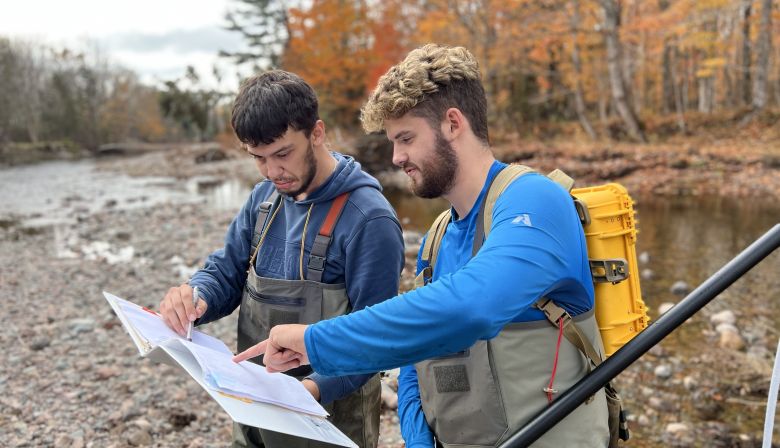 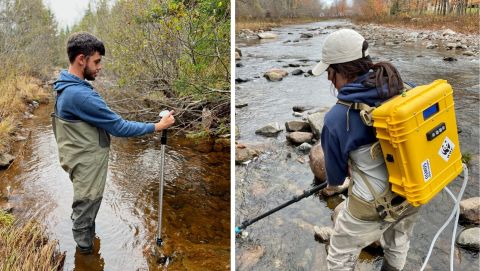 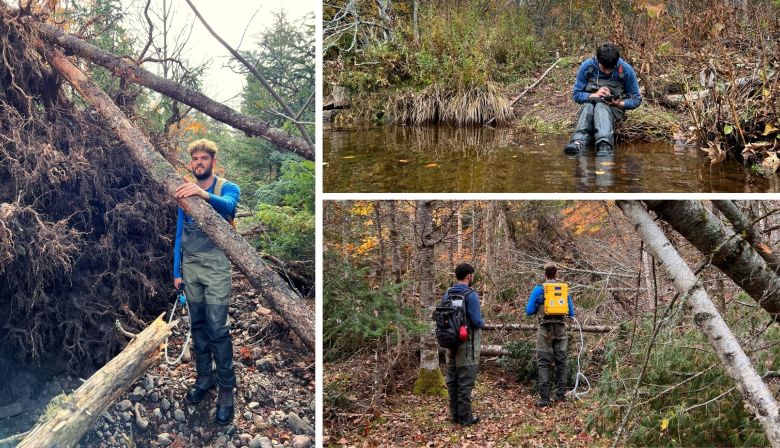 One of the more difficult sites to access since hurricane Fiona | Photos: Deirdre Green 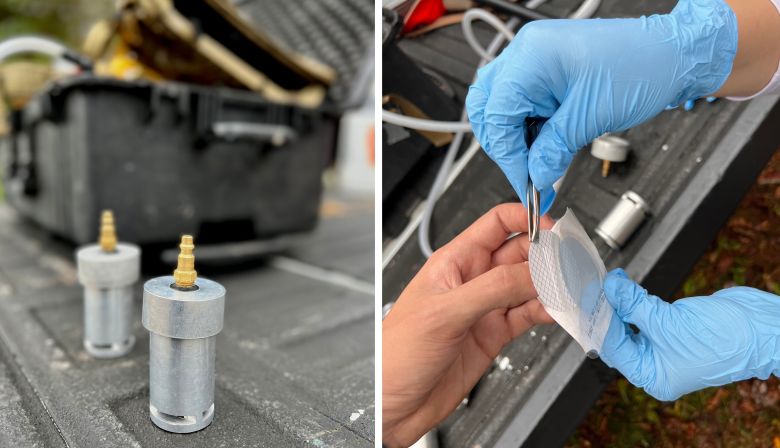 Salmon fishing continues to be extremely slow on PEI. This year marks my 12th year taking part in the extended season and I have never seen things this slow. I've only had one credible report of a single fish hooked in the past two weeks. To put things into perspective — from Thanksgiving weekend on, we'd usually expect to see between 4 and 8 fish, give or take, hooked each day.

Conversely, the fall steelhead fishing hasn't really picked up either but I hear the striped bass fishing continues to be excellent. The water is on the low and clear side but we have seen lower water. With recent rains, we remain hopeful it will make a difference for the last few weeks of the season. 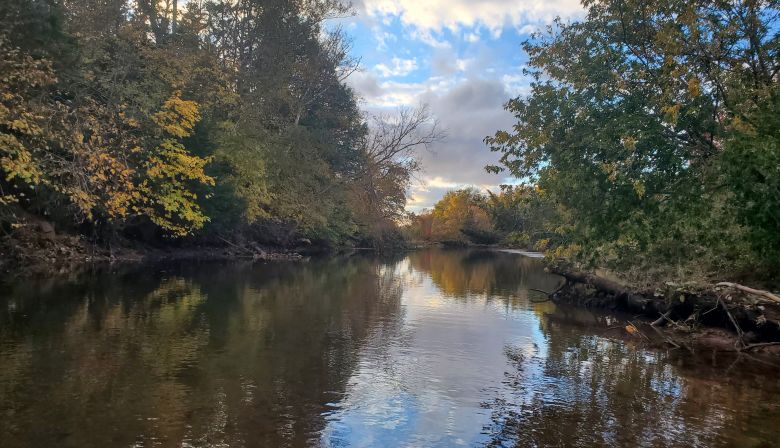 The Mooney's Road stretch of the Morell River still remains chocked with blockages - one of many effectively off limits to angling this fall. If you look closely there is a wooden gabion under the mess. | Photo: Taylor Main
Last week the Morrell River Management Cooperative & Mooney's Pond Centre shared on Facebook that they caught their first Atlantic salmon of the year in the fish trap. Be sure to follow them on social media for more updates. 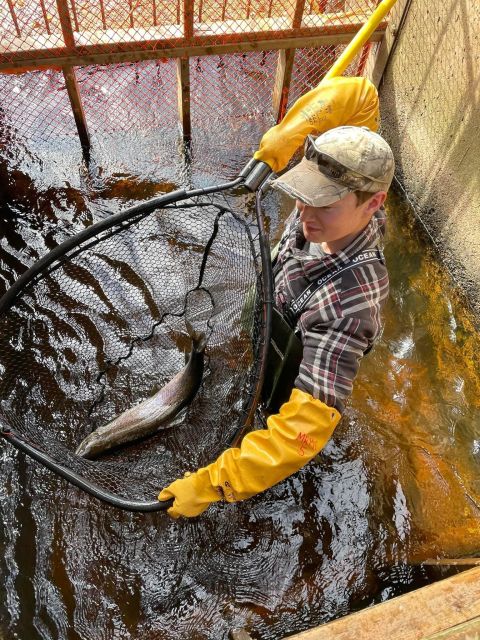 Closing the season is always bittersweet and October 15th — last Saturday — marked the end for most NB rivers. Anglers however may still find some late season opportunities in northern rivers that remain open like the Nepisiguit and Jaquet.

After a summer with generally excellent water conditions, we found ourselves waiting for rain this fall. Water conditions were quite low through late September and into October right until the 15th, although the fall scenery and weather was absolutely spectacular. It’s such a pleasant time to be on New Brunswick’s salmon rivers.

Most anglers reported that the salmon were very picky in the last couple weeks of the season, fish that had been waiting around in pools for some rain so they could make their move to a spawning area. With the rain this week, they will get the water they need to head up those small tributaries and find optimal spawning habitat.

Some pools along the Miramichi appeared to have good numbers of fish in them on October 14, which was great to see. We also observed early signs of hens digging in the gravel in the Boiestown area. Time to pack up the rods for another season! 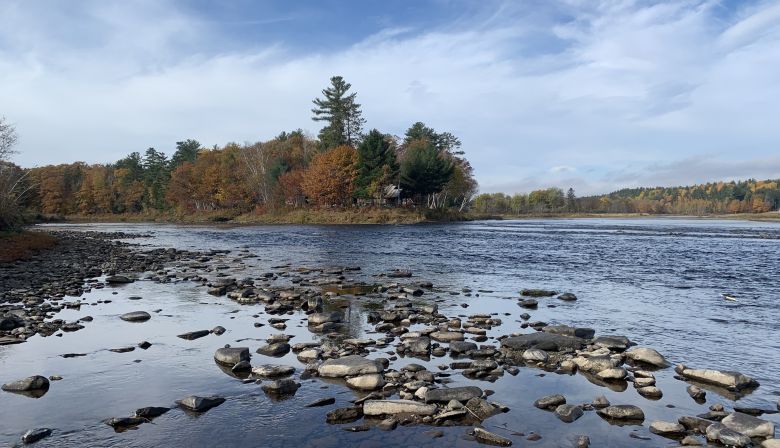 Confluence of SW Miramichi and the Taxis River. Low water to close the season. 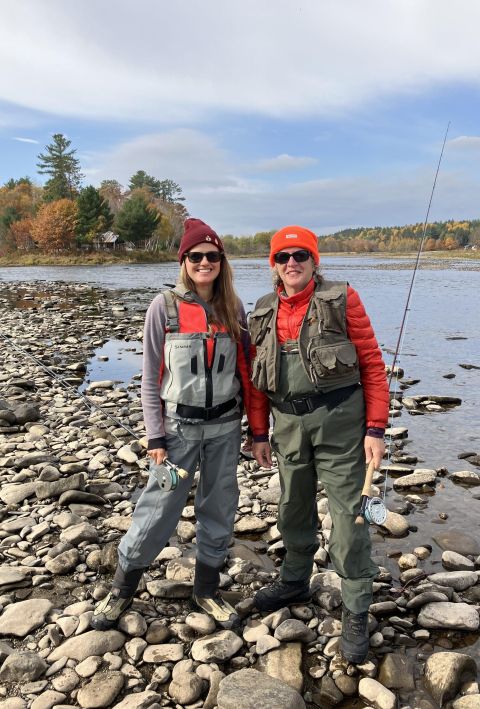 One last fish for the ladies. Julia Carpenter and Jayne Wilbur on the Miramichi. 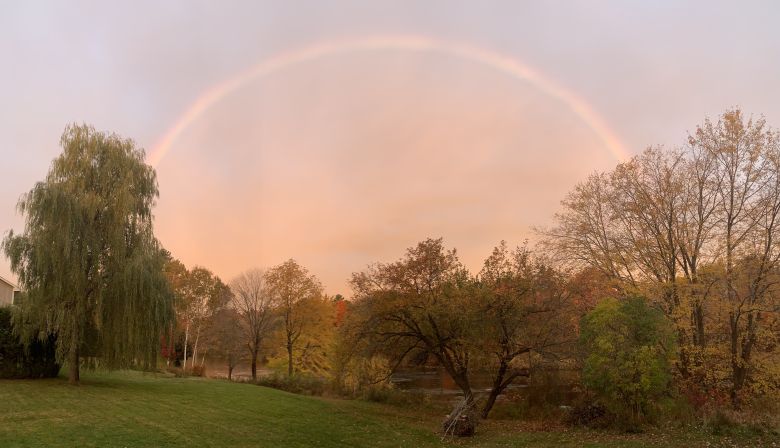 Rainbow and autumn foliage over the Nashwaak. 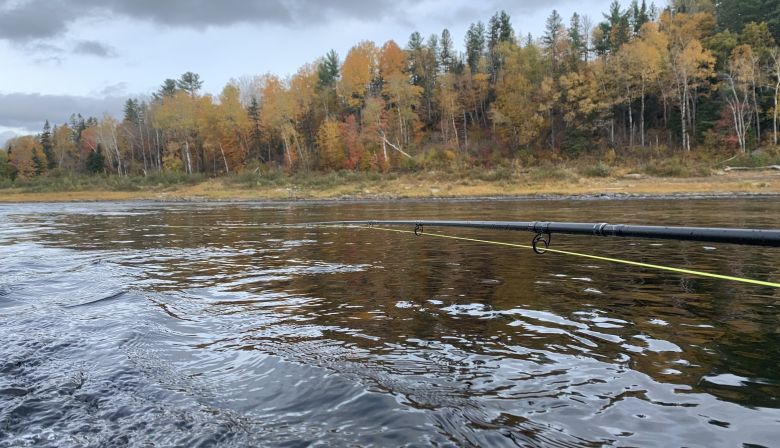 October 14th - Angler at Gray Rapids on the SW Miramichi. 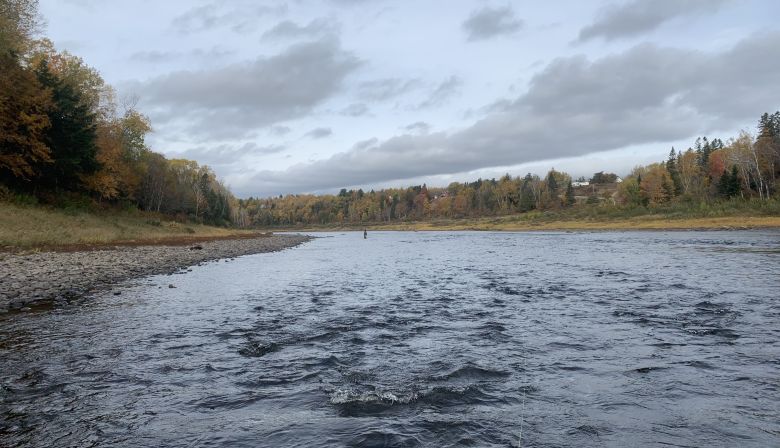 The last of the brilliant fall colours. 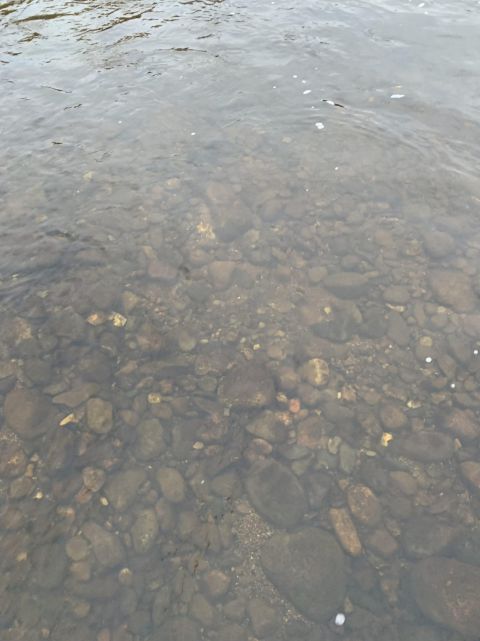 Early spawning activity - Evidence of hens beginning to dig in the gravel on the SW Miramichi.
Rain fell in New Brunswick on the last day of the season, and according to Brad Burns: There was a strong movement of fish up the Cains River — In addition, a small late run of bright salmon also materialized in the main river.

Calvin Milbury and his father closed out the season with a trip to the lower end of the Main Southwest Miramichi. Calvin notes:

We saw many salmon moving continuously through the pool, and together we hooked and released four salmon Friday (14th) and one on Saturday (15th). It was encouraging to see many large salmon returning so late. Oddly, we only saw one grilse jump during our time on the water. Unseasonably warm temps (18C) had us swiping away black flies (a first) instead of picking ice from our guides like past years.

The feeling of quickly live releasing those large salmon is sure to help us get through winter. Until next season. 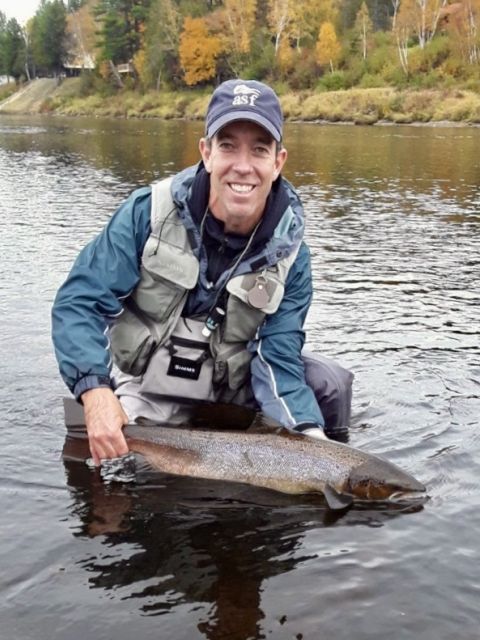 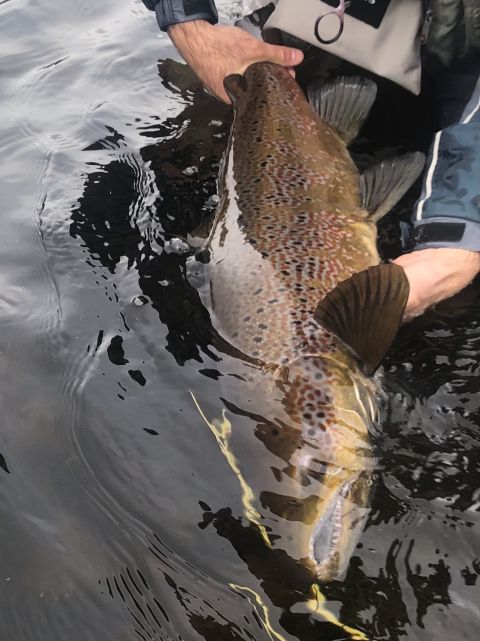 Photo: Calvin Milbury
DFO has posted the Cassilis and Millerton counts through to October 15th, 2022:

Cumulative counts to date of salmon as of October 15

No new salmon have been captured since last report. Spawning season is right around the corner and we will soon be documenting redd abundance and distribution in all the Downeast Coastal rivers.

19 new fish showed up this week! Fish movement correlated with the rising flows in the river. The USGS stream flow gage in West Enfield went from 4500CFS to 40,000CFS with this past weekend’s bout of rain. Let’s hope we continue to see some fish moving upstream. We are still in the mid to low teens temperature wise in the lower river, so there is still some time for fish to navigate to spawning grounds.