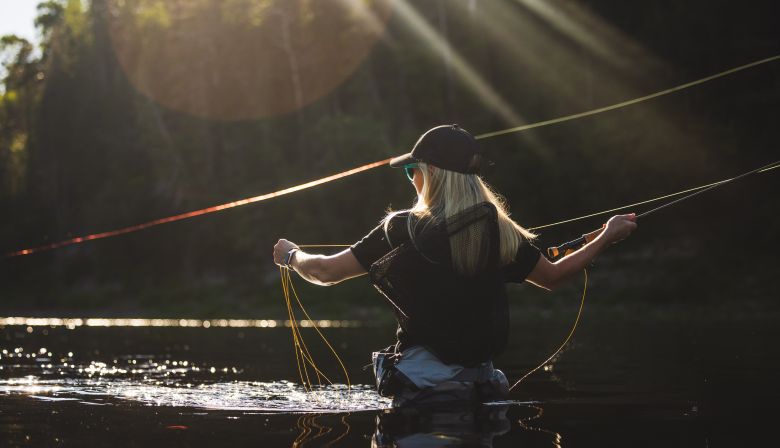 Early September has brought with it cooler temperatures and the humidity in many regions has finally lifted. A welcome reprieve from the stifling heat experienced during much of July and August. Rivers previously closed are now reopening, and anglers are hopeful for rain and fresh fish for an eventful season finale.

In this issue of RiverNotes, we feature regional angling updates along with a variety of upcoming fundraising and advocacy efforts. Please take the time to support the hard work of our affiliates. Please also share your upcoming events with us at rivernotes@asf.ca so we may feature. 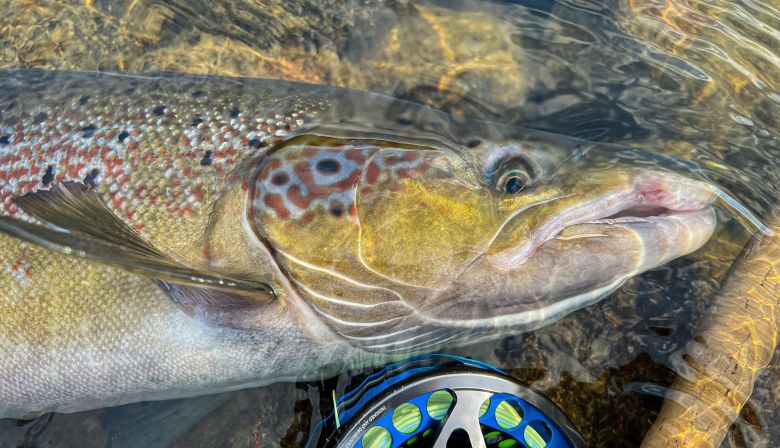 The recreational salmon fishery for the island of Newfoundland officially closes at the end of the day on September 7th . The season started strong on June 1st with both excellent water levels and cool water temperatures, and these conditions held until about mid-July. Combined with the fact that runs appeared to be strong, and a little earlier than normal, most reported great success during the first half of the season. In stark contrast, from mid-July onward, hot and dry weather resulted in poor conditions and "spotty" fishing at best.

For all those anglers praying for rain during this drought, they finally got their wish late last week when heavy rains poured down across much of the island. Water levels spiked but dropped again quickly with the hot weather this past weekend. The temporary bump in water levels allowed thousands of stranded salmon to continue their journey up-river to their spawning grounds.

The fall angling season, which is restricted to the lower section of the Humber River, Exploits River, and Gander River will remain open for catch and release angling until October 7th, 2022.

Labrador rivers also got off to a great start this season with high water levels and cold-water temperatures which continued until about early August. With strong early returns, most anglers in Labrador reported great fishing to begin the season.

Heavy rain at the end of August caused water levels to spike on many rivers in Western Newfoundland. However, hot weather conditions over the Labour Day weekend caused them to drop as quickly as they rose. Conditions remain low and warm in most areas, including Harry’s River, Southwest River, and Robinson’s River, resulting in poor angling conditions.

The recent rain caused the water level on Main River (Sops Arm) to rise quickly from low to flood conditions, making angling near impossible. Currently, the water level is low again and the water temperature is warm. Further up the Northern Peninsula, water levels rose on Torrent River and Castor Rivers and these levels are holding. Despite cooler night temperatures in this area, water temperatures remain warm at 18 degrees celsius during the day. Reports indicate that the odd fish is being hooked here, despite less than ideal conditions.

In Southern Labrador, Rob French (Bigland Outdoor Adventure Lodge) reports conditions on the Pinware have been excellent for the past couple of weeks. Unfortunately, he says there are very few fish in this section of river, and very few anglers fishing, since most salmon have now migrated to the upper sections of the river.

Again, heavy rain last week caused water levels to rise from low to mean daily flows (i.e. 120c/m/s to 240 c/m/s). Due to cold night-time air temperatures the water temperature is dropping to about 9 degrees Celsius at night but rising to 18 degrees Celsius during the day. There remains a decent sign of fish in the area and anglers are still having decent success.

Further North, guide Chris Duffett (Flowers River Lodge) reports that they had one of their best years ever this summer with many large fish being hooked by their guests. However, water levels are very low at the moment and the water temperature is warm. While fishing has slowed considerably, guests t are still hooking a few fish, many of which are large.

Unfortunately, Central Newfoundland did not receive any of the rain last week. The rivers in this region remain extremely low and warm (i.e. ranging from 18-22.5 degrees Celsius daily). While there is still a good sign of fish on the lower, angling has slowed as the Gander River the river is currently flowing at just 20 c/m/s. Conditions also remain poor on the Terra Nova River and as such this river remains open for morning fishing only. Meanwhile, the odd fish is still being hooked on the Exploits River, including a nice female fish hooked and released by Greg Fewer on September 3rd.

Heavy rain last week caused water levels on most rivers in this region of the province to rise quickly. Well-known angler, Rick Maddigan, sent along the following report from the Salmonier River:

Heavy rain last week rose the river to spring runoff levels. The last of the fish had no trouble reaching their spawning grounds. Overall, it was a good (not great) year. Runs were early, water was high and cold in June making for good fishing but July and August brought poor fishing with low, warm water. It is likely that minimum seeding of 1.200 fish was reached.

Below is a picture of the last natural barrier on the river, Metcalfe’s Falls (taken last week). In normal water, it is a leap falls of some 8- 10 feet. Above here, the river is comprised of some 15 ponds, all within the Avalon Wilderness Reserve. 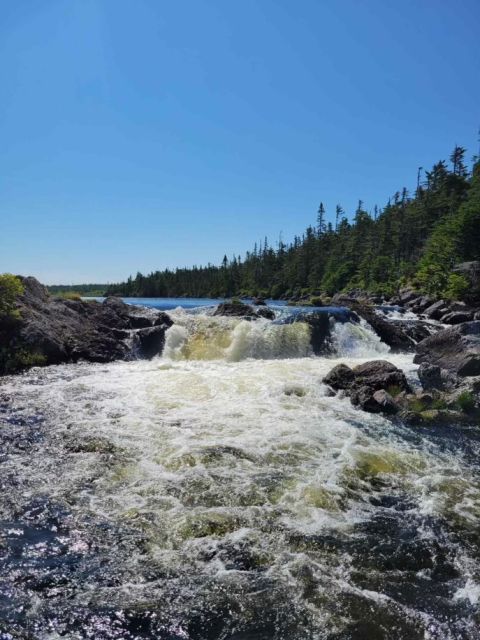 The St. Mary's River Association (SMRA) is working with the Canadian Parks and Wilderness Society (CPAWS) on a letter writing campaign focused on asking the Premier of Nova Scotia to finalize the protection of Archibald Lake as a Wilderness Area.

Please encourage your friends and family to sign and send in their comments. If we all can do this, we can make sure the Nova Scotia government knows that this is an issue that must be addressed. Our hope is that we will successfully ensure the Archibald Lake Wilderness Area is finalized and put a stop, once and for all, to the open pit gold mine proposed for Cochrane Hill.

To learn more, visit The Gold Mine Conversation today. 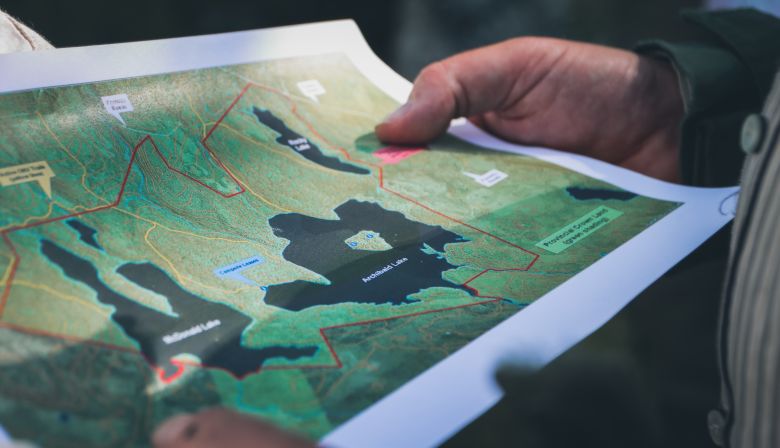 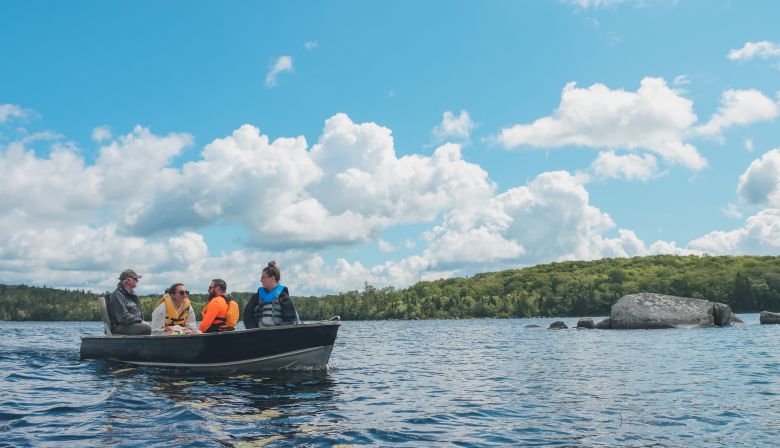 Days are getting shorter, and nights cooler. A sure sign that fall is in the air. Soon the leaves will begin to make their glorious change in colour. It's time for the fall run of the majestic Atlantic salmon.

The fall season usually means higher water, but not as of yet on the Margaree river.  With cooler temperatures on the lower river, DFO has re-opened the river (See Re-opening Notice). This will take effect today, September 8th at 4 PM and will remain in place until further notice.

With conditions like these, I personally move from the river and target trout in colder streams and brooks. We can also move to tidal water to fish for striped bass. Stripers are great fun on the fly and excellent table fare.

On another note, all signs point to good numbers of fall fish. These salmon, like us, are patiently waiting on rain so we might enter the river system again.

As a guide, fair warnings go out to clients on conditions and what to expect. Also, a reminder — September is catch and release for all speckled trout (brook trout).

Tight lines to all. I hope to see you on the river! 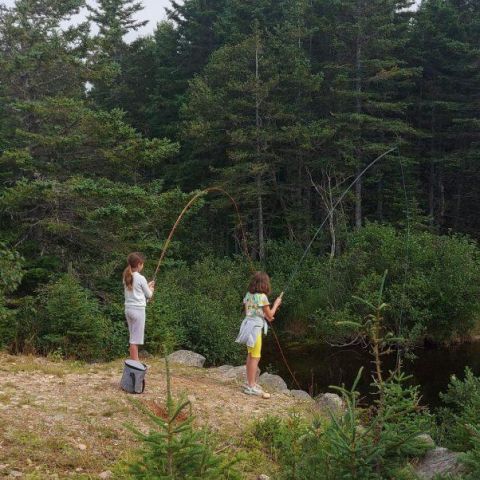 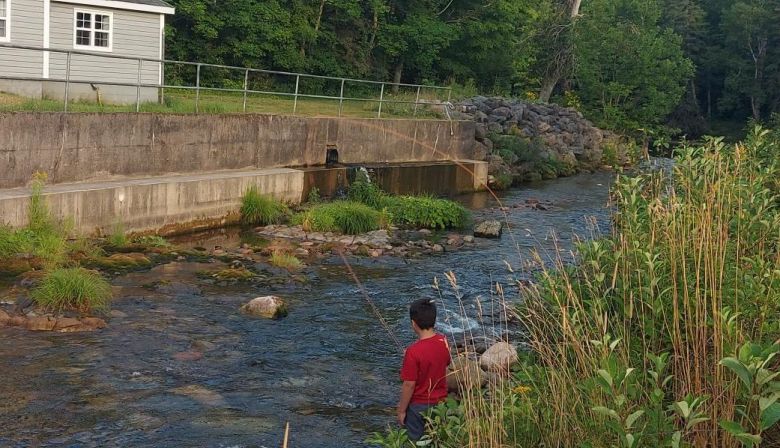 The Antigonish Rivers Association (ARA) invites you to their upcoming event.

If you haven't purchased your tickets, call Dana today to secure your seat!

With 24 days left in the very encouraging 2022 season, a good amount of rain in strategic areas such as Murdochville and Amqui would help many rivers. Water levels may be low, but the salmon are present in very good numbers which can produce some September surprises.

Don’t hesitate to share your photos and stories with us, we are always ready to include them in this weekly blog.

The data used for the Quebec River notes has been sourced from various river websites, social media and Quebec government sources. Information may change without prior notification respecting past year’s comparative figures.

According to the statistics provided by the APSB (Bonaventure Sport Fishing Association) to September 3rd: 1,394 fish have been reported landed, consisting of 1,055 releases and the harvest of 339 grilse.

Bonaventure anglers reported, cumulatively for the season as of September 5th, 2021, 963 fish consisting of 657 salmon released and 306 grilse harvested.

The Zec is reporting a cumulative total of 1,675 fish (1,092 salmon and 583 grilse) being counted through the fishway at of September 4th.

715 captures have been registered with the CGRMP to September 6th, consisting of 450 fish released and 265 grilse harvested.

To September 7th, 2021, anglers had reported landing a total of 678 fish, of which 353 having been released and 325 harvested. The breakdown of salmon and grilse harvested since August 1st was not available at that time.

Recent rain and cooler overnight temperatures have produced excellent fishing conditions in most of the province.

Reports from Country Haven Lodge speak of fresh male salmon hooked at Black Brook lodge, which is often an indication that the fall run has begun.

The Millerton and Cassilis trap numbers through August 31 were probably counted too early to contain all of this recent push of fish, but both traps gained ground on last year’s numbers. The SW Miramichi salmon number is now ahead of last year – and the 4th best since 2011 – even though last summer’s cool, wet conditions were much more conducive to attracting fish into the river. Grilse are still down considerably compared to 2021, but that’s a tough comparison because 2021 was the second-best grilse year since 2011. So far 2022 is the fourth best, and if we have a good fall run, we may gain some more ground. All of this is to say that the numbers are pretty good and may get better. 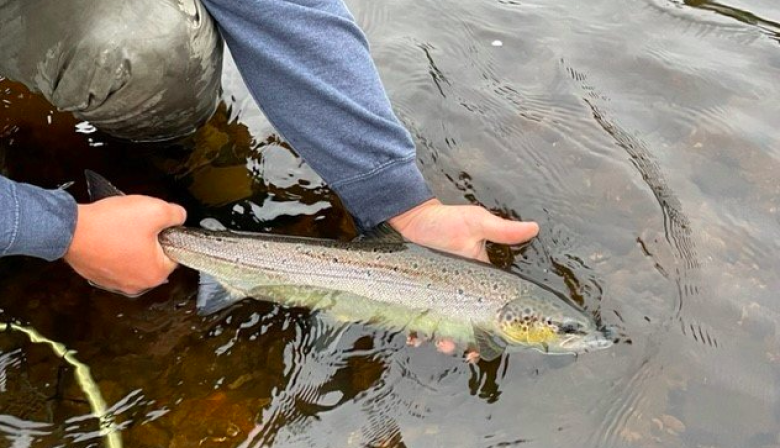 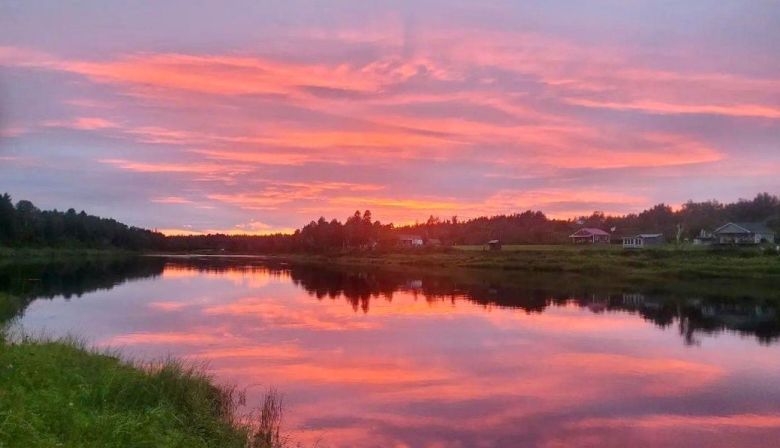 
To learn more and show your support, please visit their website HERE. Purchase tickets before December 15th to be entered into the Early Bird draw.

Temperatures have still been warm on the mainstem Kennebec throughout most of this past week, averaging around 22°C. Despite the rain that has come through the region this past week, the flow level in Sidney, ME has been steady – hovering just above 5,000cfs. The discharge level is now between the mean and 75% historic discharge levels (based on 36 years of data). (USGS current conditions).

The fish lift has been fully operating over most of the past week. No Atlantic salmon were captured since the last report.

This week wrapped up our fourth round of community assessment in the tidal reaches of the greater Kennebec river. To date we have completed 4 rounds of both the upper river sein survey and the lower river survey, for a total of 112 sein halls at 28 different sites.

As the summer slips away, seining becomes repetitive and we count spot tail shiners in our sleep, however the Kennebec never fails at giving us surprises. This week was no exception! This week for the first time, we caught a summer flounder in our sein! Summer flounder (Paralichthys dentatus) are a popular game species in other New England states and warmer waters, however this was a first in our survey. The most commonly caught flounder in our lower sites is winter flounder (Pseudopleuronectes americanus). 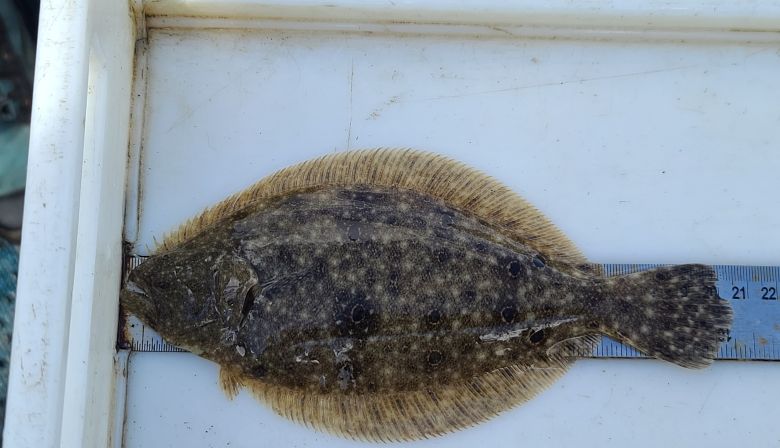