With September we can certainly guarantee declining water temperatures in the next few weeks, which will be a relief to both wild Atlantic salmon and those who care about their well being.

But how was it in European rivers? Next week is the ASF RIVERNOTES' annual spot check on how things have been going, from Northwest Russia to Iceland and from Norway to Spain. Don't miss our EUROPEAN SPOT CHECK.

Atlantic salmon counting fence on the Etne River in the Hardangerfjord region of Norway. Jonathan Carr/ASF

The count to Sept. 2 for the Dungarvon counting facility has 78 grilse and 58 large salmon with only two new grilse this past week. The numbers in 2017, which were already critically low, were much better at 91 grilse and 121 large salmon.

Brock Curtis of Curtis Miramichi Outfitters in Blackville comments as of Sept. 5:

Last week's warm temperatures and forecasted rain didn't seem to materialize, resulting in fewer salmon being caught. River levels are down and we could use rain. Cooler temperatures are in the forecast for the rest of the week. Anglers coming into the tackle shop are commenting on seeing the odd salmon jumping along the river. Most reports of salmon caught were on the Cains and Miramichi.

It did rain quite hard last night here in the Blackville area but not enough to raise the river levels. You can see early signs of Fall approaching as some leaves are starting to change. With cooler temperatures Fall salmon runs should soon be the talk along the river. We are really in the early stages of some of the best salmon fishing on the Miramichi. For those who enjoy Fall fishing we are almost there. 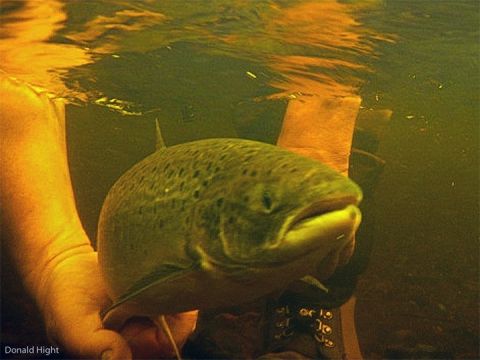 Release at the mouth of the Cains River. Photo Donald Hight.

All of the 2018 numbers are at historic lows for this great Atlantic salmon river. Undoubtedly there are many stresses on the salmon populations, but in addition to the extreme heat this year, one can also look to the very high numbers of Striped Bass and grey seals as having considerable impact.

NOTE: CLOSURE OF THE GANDER MAINSTEM - CHECK THE NL SITE OF RIVERS CLOSED/OPEN FOR DETAILS.


The latest count available is Aug. 26:

The season ends on Friday for most rivers, with the Gander, Humber and Exploits after that day. While many of the numbers are better than in 2017, they are still down from long term averages, with 2016 and 2017 both years of large declines.

The warm water has added to concerns this year, and even as this is written, many rivers remain closed due to high temperatures. Some were reopened as of Sept. 6. Check out the listings.

A beautiful salmon being released on the Exploits River in years past. Photo Bill Bryden

It appears that numbers have continued to increase in Labrador. Given a late start to the counting fence on the Sand Hill, the numbers are certainly more than double the 2017 count. Plus each of the other counting fence results, with all beating the most recent five-year average, and all but one beating the 1998 to 2017 average.

There certainly is good evidence that Labrador salmon management needs to be looked at entirely separate from that of the Island of Newfoundland.
Mike Crosby of Flowers River Lodge says:

We are nearing the end of the season at Flowers and still have pretty consistent fishing. There are also bright fish still entering the river. Water is low. 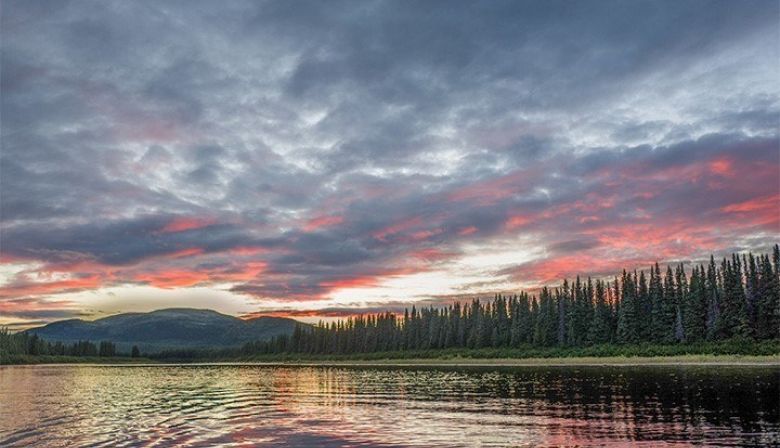 Focus on the Flowers River, and its Atlantic salmon. Sept. 2017. Mauro Mazzo

Mauro Mazzo releases a handsome 25 pounder on the upper Flowers River in Labrador.

Heading into the autumn, low water conditions have had a major impact on angling. But with a little luck and a few September storms from the south, angling should improve. 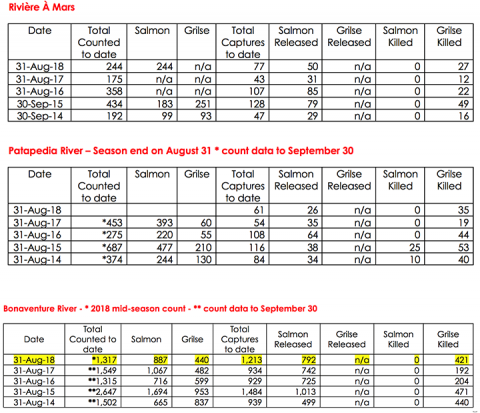 Meanwhile - a troubling video below - thousands of striped bass milling in great numbers at the mouth of the Bonaventure. At this time of year they are no threat to smolt - but if this happens in spring... Plus, multiply this to a mass covering an entire river, and you see what the lower part of the Northwest Miramichi is like just when the smolt are trying to leave the rivers.
Video above - Striped Bass in Bonaventure River, Gaspé

Christian Kirouac releasing a salmon on the Petite Cascapedia in years past. Photo Lee Seshagiri 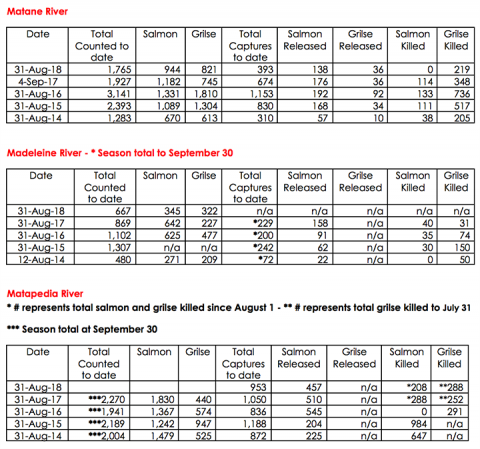 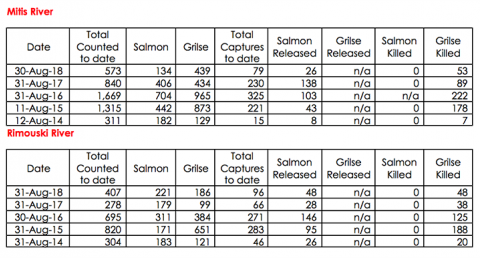 Andy Goode, ASF Vic-President of U.S. Operations notes:
Maranda Nemeth is a civil engineer that ASF, the Nature Conservancy, and the Midcoast Conservancy hired to help implement three dam fish passage projects in the Sheepscot River over the next three years. She started a month ago and has hit the ground running – managing engineers, contractors, and interacting with the general public around the Coopers Mills Dam removal. She works a day a week in ASF's office in Brunswick, ME.

Dams being removed on the Sheepscot to improve fish passage.