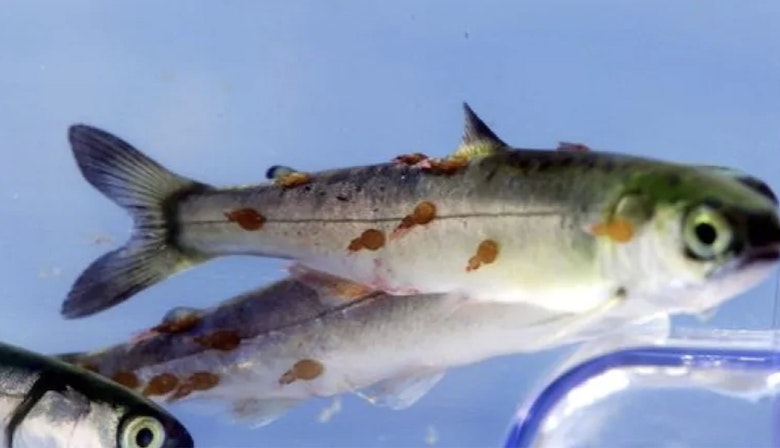 Pacific salmon fry with sealice. Photo Alexandra Morton
A total of 101 B.C. First Nations, wilderness tourism operators, and commercial and sport fishing groups have united in a show of solidarity to demand the federal government take action on the collapse of Fraser River salmon stocks by ordering the removal of open-net fish farms near Campbell River.

"If we don't come together as a unified group ... we'll be telling our children that there used to be salmon in the Fraser River," said Musqueam Indian Band Chief Wayne Sparrow.

Speaking at a media conference in North Vancouver, the group says Fisheries Minister Bernadette Jordan needs to make good on the 19th recommendation of the 2012 Cohen Commission's report on declining Fraser River salmon stocks. The recommendation calls for the prohibition of 18 fish farms in the Discovery Islands by Sept. 30, 2020, unless there is proof they pose only a "minimum risk of serious harm to the heath of migrating Fraser River salmon."

In the 2015 election campaign, Justin Trudeau promised his government would act on all 75 recommendations made by Justice Bruce Cohen.

"They made promises that they must uphold," said Robert Phillips of the First Nation Summit. "Inaction equals broken promises."

The Cohen Commission was launched in 2009 when only 1.5 million salmon returned to the Fraser River, a precipitous drop from the 5 million that were expected.

This year the prediction is for a record low return of 270,000 salmon.

The fish farms in question dot narrow migration routes where juvenile wild salmon travel out of rivers to the open ocean, where they grow and mature.

Critics and some scientists say sea lice from the farmed salmon are infecting the wild salmon as they swim past, greatly raising the mortality rate of the wild fish.

According to the Living Oceans Society, a study by marine biologist Alexandra Morton found 99 per cent of juvenile salmon out-migrating from the area had a fatal load of sea lice.

But a spokesman for the Salmon Farmers Association of B.C. says studies cited by the industry found sea lice loads within accepted standards. He says according to the science, fish farms are having "minimal" affects on Fraser River salmon.

"Done responsibly, the science is telling us that salmon farms are not having a negative impact on wild salmon stocks," said Shawn Hall.

The office of the Minister of Fisheries says it has completed eight of nine "risk assessments" pertaining to the Discovery Islands fish farms, with the final one to be released before the end of the month.

"The deadline to respond is Sept. 30, and we will have more to say on this matter very soon," reads the statement.

Regardless of the outcome, members of the coalition are calling for a complete overhaul of the Department of Fisheries and Oceans, citing years of mismanagement as the number of Fraser River salmon continues to decline.

"When a department fails so miserably as DFO, it's time the federal government says we need a reform here, it's not working," said Chief Judy Wilson of the Union of B.C. Indian Chiefs.

"DFO has lost the script," said coalition organizer Bob Chamberlin. "If you do not enact Cohen #19 ... just who are you listening to?"