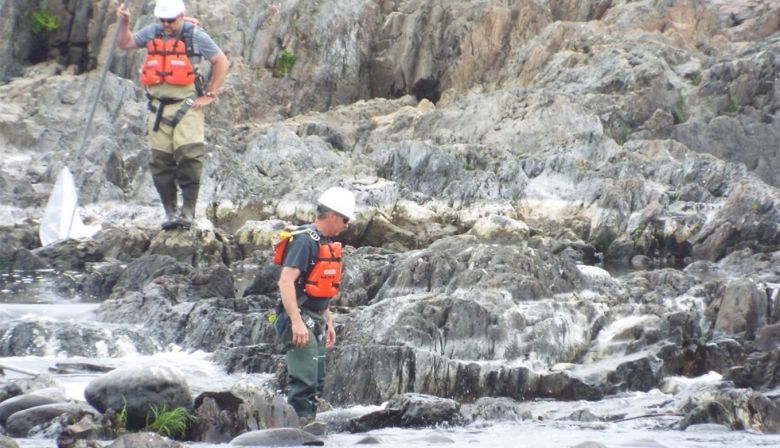 Brookfield employees inspect pools in the rocks below Miilford Dam, seeking any trapped wild Atlantic salmon. Photo Robert Wengrzynek.
Atlantic salmon conservationists looking for some good news after several years of lackluster returns to Maine rivers have a reason to smile this morning: On Thursday, 107 salmon were captured at the Milford Dam fish lift.

“Highest single-day catch at the Milford lift ever!,” Jason Valliere of the Maine Department of Marine Resources Division of Sea Run Fisheries and Habitat wrote in a brief email Thursday night.

Now, one day doesn’t make a run, but the total was certainly encouraging. Consider: Last year just 759 fish were counted at Milford all season. That makes Thursday’s total 14 percent of the entire 2018 run.

Crews from the DMR and Brookfield Renewable, which owns the dam, have been monitoring several salmon near the dam this week, making sure they don’t get permanently stranded as water levels drop in the wake of the installation of flash boards on the dam.

The fish lift at the Milford Dam has been the primary fish-counting facility on the Penobscot — and the first upstream barrier to fish passage — since 2014, after the downstream Veazie Dam was removed as part of the Penobscot River Restoration Project.

The good news about salmon returns to the Milford Dam fish list is tempered by the fact that in February the National Oceanic and Atmospheric Administration and the U.S. Fish & Wildlife Service released their plan for the recovery of Atlantic salmon within the Gulf of Maine distinct population segment. It estimated that it will take 75 years, about 15 generation of fish, for Gulf of Maine Atlantic salmon to be delisted.

Resistance to Improving Maine Androscoggin Water Classification
May 13, 2021
The Worrying Decline of Atlantic Salmon
May 12, 2021
Brookfield temporarily shuts down 3 Kennebec River dams for salmon migration
May 12, 2021
Call for moratorium on ocean-based salmon farming - Letter from John Risley
May 12, 2021