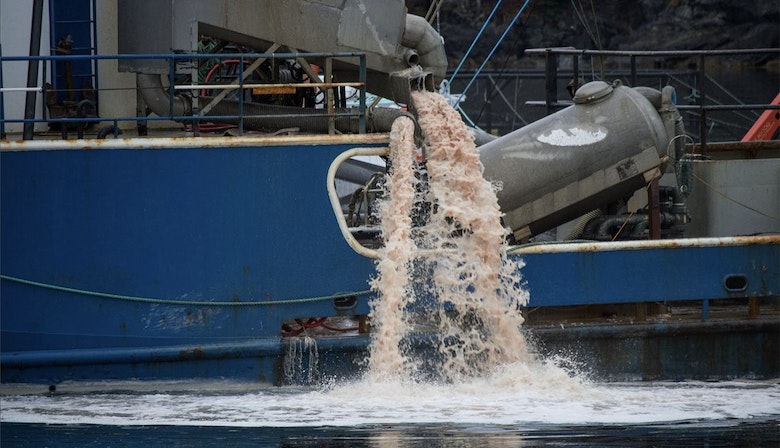 The removal of the 2.6 million dead Atlantic salmon in Fortune Bay. Atlantic Salmon Federation/Bill Bryden
Fishing captain Gary Snooks pulls his boat alongside a fish cage in Fortune Bay off the southern coast of Newfoundland.

“Everything was just smothered with this fat,” says Snooks, who’s been fishing lobster, herring and scallops in the eastern Gulf of St. Lawrence for 40 years. “There's a lot of concern among fishermen.”

It’s been more than two months since a record 2.6 million salmon died in pens on Newfoundland’s south shore due to unusually warm waters, the biggest die-off of farmed fish in Atlantic Canada’s history. 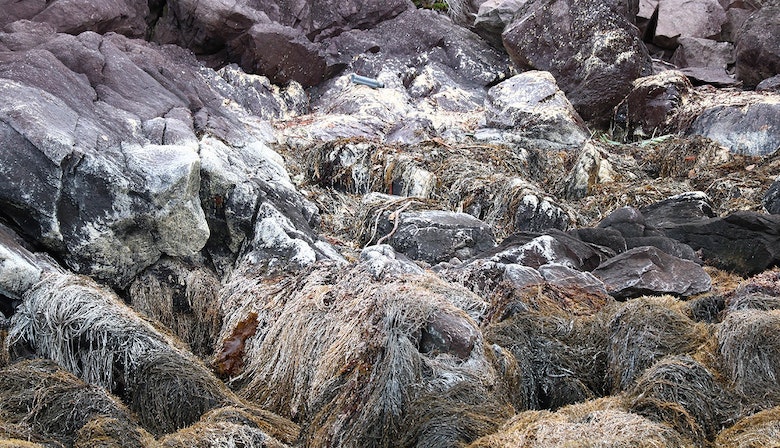 An oily residue from the removal of the 2.6 million dead Atlantic salmon in Fortune Bay. Atlantic Salmon Federation/Bill Bryden
Deaths chum the waters

The salmon deaths have reignited debate over the fledgling aquaculture industry on the East Coast, and its potential impact on the environment and traditional fishing grounds.

Questions are being raised about antibiotic and pesticide use, and how the chemicals used to treat sea lice and infections could affect marine life.

As crews continue to clean up the remaining lard-like salmon sludge from the banks of Newfoundland’s south shore, observers are expressing doubts about whether salmon farming and traditional fishing can co-exist.

“The rocky shoreline of our coast is the nursery for young fish and invertebrates that are the subject of our commercial fisheries.”

Concern over the mass die-off has been heightened because of transparency issues with reporting the dead fish, stoking fears that the industry isn’t adequately regulated.

“The regulations are very lax in Newfoundland,” says Don Ivany with the Atlantic Salmon Federation. “It’s typical politics – the province sees the jobs and the economics first and foremost and is less concerned with the environmental impacts.” The Newfoundland government has responded with the release of new aquaculture policies and procedures, while other Atlantic provinces say they are monitoring the situation.

The deaths of millions of fish can be traced back to the summer, when warm water filled Fortune Bay, a broad inlet on the south shore.

Salmon clustered at the bottom of pens in search of cooler water and suffocated from a lack of oxygen. In all, about 5,000 tonnes of salmon – half of Northern Harvest’s fish stock – perished. The company said in a press release the fish mortalities – which were insured – would cost more than $7 million.

The situation has dealt a serious blow to an industry many say has breathed new life into struggling coastal communities.

The economic promise of aquaculture has propelled the Atlantic Canada Opportunities Agency to provide nearly $100 million in funding for aquaculture-related academic research, development and commercial activities since 2006. Provincial governments have also provided funding.

Mark Lane, executive director of the NL Aquaculture Industry Association, says the industry has made massive investments in communities across the region and employs hundreds of workers.

Although he admits the fish die-off was unfortunate, Lane says there have been “lessons learned” and the industry is already making changes.

“People on the front lines worked from well before dawn to well after dusk every day to ensure the cleanup was done and any mitigating measures were implemented as quickly as possible,” he says. “This will improve the industry.”

Norwegian seafood giant Mowi ASA, which purchased Northern Harvest in July 2018, said it acquired the company “as is.”

“Mowi did not change the nets that were already in use because we had no way of knowing that this climate event would occur,” Alf-Helge Aarskog, then CEO of Mowi, said in a letter to Newfoundland Premier Dwight Ball and Fisheries Minister Gerry Byrne last week.

“We have learned that the environment on the south coast is more unpredictable than expected, and we clearly recognize that changes must be made.”

The company, which had its licences pulled at the 10 affected sites, has committed to several new measures, including fitting pens with deeper nets equipped with aeration systems.

Northern Harvest spokesman Jason Card says the company launched a massive clean-up. He says there are dive teams, cleaning crews and vessels on the water to collect the salmon matter, and an independent environmental monitoring group has also been hired to oversee the work.

A spokeswoman for Fisheries and Oceans Canada says officials continue to monitor the situation.

“Officials have been on site conducting at-sea and shoreline patrols, and engaging in air surveillance of the area to monitor dispersal of the organic material,” Stella Ruddock said in an emailed statement.

“We’ve requested that the company provide us with regular reports from the monitoring and clean-up activities, and we continue to work with the province and the company with regard to matters within our jurisdiction, including potential environmental impacts to fish and fish habitat.”

Card says fish farmers have to be adaptable to climate changes.

“We're no different than land-based farmers who are also finding that there's extraordinary effects on their crops,” he says. “We’re going to be responsible and responsive and behave as though this temperature event could be a matter of course in the coming years.”

But land-based farming is exactly what many critics say conventional coastal open-net aquaculture should become.

“Land-based operations are the way of the future,” Ivany says, noting that growing fish in land-based tanks or in pens walled off from the open ocean protects the environment and commercial fisheries.

Indeed, during the fall election the Liberals promised to phase out open-pen salmon farms in British Columbia and move toward closed-containment systems. Yet aquaculture proponents say the industry would leave the Atlantic region if fish farming could only be done on land, moving closer to larger markets.

Mowi Canada holds 47 licences in Newfoundland and 12 in New Brunswick.

A spokeswoman for the New Brunswick Department of Aquaculture said the province is aware of the situation in Newfoundland, but that “due to the dynamic nature of the tides in the Bay of Fundy, New Brunswick has a different operating environment for our fish.”

“Our province has strong regulations in place that the aquaculture industry must follow,” he said in an emailed statement. “While we remain open to implementing any demonstrated improvements, we employ a proactive approach in which close monitoring is required, so that potential issues may be addressed before they can become problems.”

Although P.E.I. does not have salmon farming, aquaculture director Neil MacNair the province does grow shellfish in the marine environment.

“Shellfish aquaculture has been proven to be a very green industry that actually improves water quality by removing nitrates. No antibiotics are used and all farms sign on to the Aquaculture Environmental Code of Practice.”