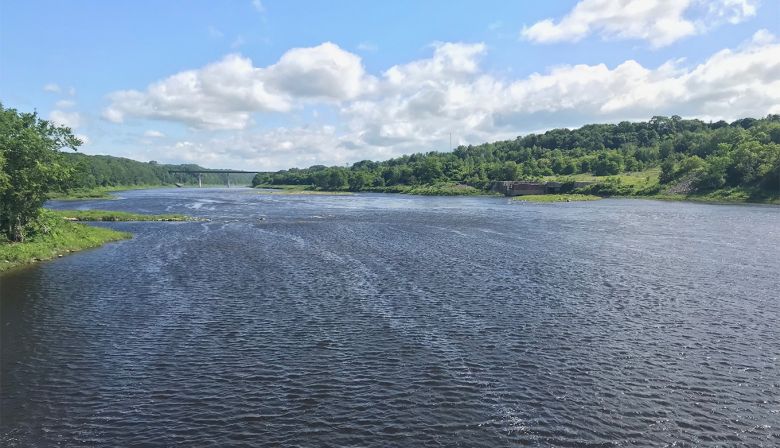 The Kennebec River on July 1, 2019. Removal of the Edwards Dam has brought new life to this river, and the ecosystem continues to improve. Maranda Nemeth
Augusta, ME – Alewives, Bald Eagles, and other wildlife continue their inspirational return to the Kennebec River and its tributaries, 20 years after the Edwards Dam was removed here along the banks of Maine’s capital city.

The dam’s removal on July 1, 1999, revitalized the river’s health, contributing to the return of more than 30 million alewife (river herring) and a huge boost in the state’s Bald Eagle population. It also sparked a movement for free-flowing rivers in the U.S. and around the world, resulting in nearly 1,200 dam removals in the U.S. since 1999.

The remarkable recovery of the free-flowing Kennebec River was the result of a unique collaboration among conservationists, state agencies, and public officials. It led to other successful dam removals in Maine including the Fort Halifax Dam in Winslow in 2008 and two dams in the Penobscot River, the Great Works and Veazie, that, as part of the Penobscot River Restoration Project, restored more than 2,000 miles of habitat to sea-run fish.

“After the Edwards Dam was removed, my friend Harry Vanderweide and I enjoyed many days of fantastic fishing between Sidney and Waterville,” said George Smith, former long-time executive director of the Sportsman’s Alliance of Maine.

At a gathering held on the 20th anniversary of the Edwards Dam removal, the Natural Resources Council of Maine (NRCM) announced plans to form a committee that will design and fund a new informational display in Augusta’s Mill Park about the history of the Edwards Dam, highlighting the significance and success of its removal. Funds also will be raised to install viewing binoculars overlooking the spot where the dam once stood.

Mill Park now includes a boat ramp, pavilion, farmers’ market, dog park, and green space, but there is no permanent information about the Edwards Dam. The goal of the committee, which will be co-chaired by NRCM CEO Lisa Pohlmann and Senator Matt Pouliot (R-Kennebec), will be to have the display in place by Spring 2020.

Standing on the banks of the Kennebec River on a late spring afternoon, NRCM’s Advocacy Director Pete Didisheim, reflected on the historic significance of removal of the Edwards Dam, as he watched sturgeon leaping in the very site where the dam had stood since 1837.

“This was the dam removal that was heard around the world, grabbing headlines as far away as Japan and capturing imaginations everywhere about the potential benefits of removing dams that prevent fish from reaching critical habitat,” said Didisheim. “Removing the Edwards Dam has been a huge win for the Kennebec, communities along the river, and the fish and wildlife that returned with a vengeance once a path was cleared to reach waters that were blocked for 160 years.”

Other members of the Kennebec Coalition (NRCM, American Rivers, Trout Unlimited, and Atlantic Salmon Federation), the group that that fought for the dam’s removal for more than a decade, highlighted a broad range of benefits that have been experienced by wildlife and people since the dam’s removal in 1999.

“The removal of Edwards Dam has created the best American shad fishery in New England, restored an annual run of more than four million river herring to the lower Kennebec River, and set the stage for salmon restoration on the Kennebec,” said Jeff Reardon of Trout Unlimited. “Twenty years later, it’s time to honor that precedent by getting sea-run fish past the other dams on the Kennebec.”

“The removal of Edwards Dam sparked a movement for free-flowing rivers in the U.S. and around the world. Today, the Kennebec is rebounding and rivers nationwide are coming back to life thanks to the removal of harmful dams,” said Bob Irvin, President and CEO of American Rivers. “Rivers are the veins and arteries of our nation and restoring their health benefits our economy, our health, and our future. In the last two years, record numbers of dams were removed in our country, showing that the demand for healthy rivers is greater than ever. While we have a lot to celebrate, our work is far from finished. Together with our partners, we'll make sure that the next 20 years are even more successful for our rivers and communities."

“The precedent-setting 1999 Edwards Dam removal continues to surprise us all with the dramatic recovery of the river and its native fish,” said Steve Brooke, who staffed the Kennebec Coalition in the 1990s.

“The Edwards Dam project was the United States’ first example of how dam removal does provide broad-scale recreational and fisheries benefits to society. Today, the lower Kennebec has some of the largest runs of river herring and American shad in the Northeast thanks to the hard work of conservationists and state and federal fisheries agencies back in the 1990s,” said John Burrows, Director of New England Programs at the Atlantic Salmon Federation.

“However, all of the Kennebec River above Waterville – a huge watershed area – remains broken and inaccessible to sea-run fish for spawning and rearing due to myriad dams and unnatural impoundments. The fate of endangered Atlantic salmon in Maine will be determined by decisions made about dams on the river over the next decade. We need to reduce the number of dams on the Kennebec to find a balance between economics, recreation, and fisheries values,”  Burrows added

Removal of the 917-foot-long Edwards Dam, built in 1837, came about because, for the first time, the Federal Energy Regulatory Commission (FERC) ruled that the ecological value of a free-flowing river was greater than the economic value of the dam. Excavators breached the dam on July 1, 1999, with 1,000 people watching the event from the banks of the river in Augusta.

On July 17, 2008, FPL Energy Maine Hydro breached the Fort Halifax Dam on the Sebasticook River, a key tributary of the Kennebec River, after deciding that removal made more sense economically than investing in the type of fish lift that would have been required. More than three million alewives return each year to the Sebasticook, passing through a modern fish lift at Benton Falls. Along five miles of the Sebasticook, from Winslow to Benton Falls, the Maine Department of Inland Fisheries and Wildlife has counted as many as 58 Bald Eagles in a single day, drawn to the abundant alewife run.

Learn more about the Edwards Dam removal and timeline of its history.