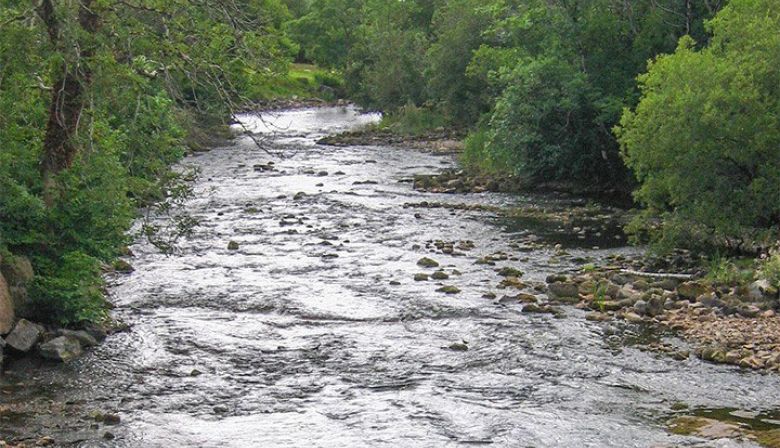 Drowes River in northwest Leitrim drains from Lough Melvin the short distance to Donegal Bay. Photo Tom Moffatt
“It has taken 36 years for the river Drowes to record a specimen salmon (20lb-plus), but the wait was well worth it,” said an elated Shane Gallagher, following the capture of a 25lb fish from the river last Monday.

“Back in 1985 when Anton Basso caught a 25lb 8oz salmon on worm, I was only nine years of age,” the Drowes proprietor said.

The excitement unfolded for the captor Seamus O’Neill, as told by his close friend Ed Hanna. “Living locally in Ballyshannon, Seamus never actually fished the Drowes and anytime he did go fishing it was always a Rapala lure he stubbornly believed in.

“Recently I coaxed him along to try the Drowes and to put up a Black Flying ‘C’. Within five minutes he landed a 10lb salmon.” Needless to say he was sold – hook, line and sinker.

“We were back again last Monday to the Old Sea Pool and on the third throw, Seamus connected with something very big. Was it a rock? No, indeed, it was a very big fish and while it lay on the river bed for a while, it soon took off up and down the pool,” Hanna said.

It was all of 45 minutes before the fish was ready for landing and panic stations again set in as the 18-inch mesh net was too small. Luckily, one suitable was found nearby and the huge fish was safely banked.

Probably the sad part of this fantastic story is the fact the cock fish had swallowed the lure deep and only access was through the gills. The intention was to release the fish. Now it will be given over to a taxidermist and, no doubt, its memory will be on display for a very long time.

Gallagher added that the multi-winter fish looked fresh with no sea lice and the pool is only 50 yards from the tide. He also said that another salmon of 9lb was caught last Tuesday.