65 fish and counting: The tentative recovery of Kouchibouguacis salmon

Salmon fishing was banned altogether in the river in 1999 when only 12 fish were counted returning from the ocean.

That number later slipped to nine.

"It came down really, really low to a very dangerous number," said Mario Doiron, co-ordinator of Friends of the Kouchibouguacis, a non-profit group devoted to restoration and preservation of the river, which is regarded as a sister stream to the nearby Kouchibouguac.

After getting together in the late 90s, the group began to seek help from experts and other salmon river restoration organizations.

"One of the first things they said is fix the habitat problems that lead to the decline of the salmon," said Doiron. "So we did a lot of work with landowners and people who work, live and play on the river."

Historic log runs had taken a toll on the riverbanks, as had landowners who mowed their lawns to the water's edge contributing to erosion which lead to sediment buildup on the river's gravel bottom.

The group, which lists the Elsipogtog First Nation Fishery as a partner on its website, worked closely with landowners on habitat restoration then began to look for ways to boost the tiny salmon population directly.

An attempt at stocking failed because of high mortality rates among the fish being raised in tanks.

The plan was abandoned and the group reassessed its options.

That's when they hit on a device called the Jordan-Scotty incubator. 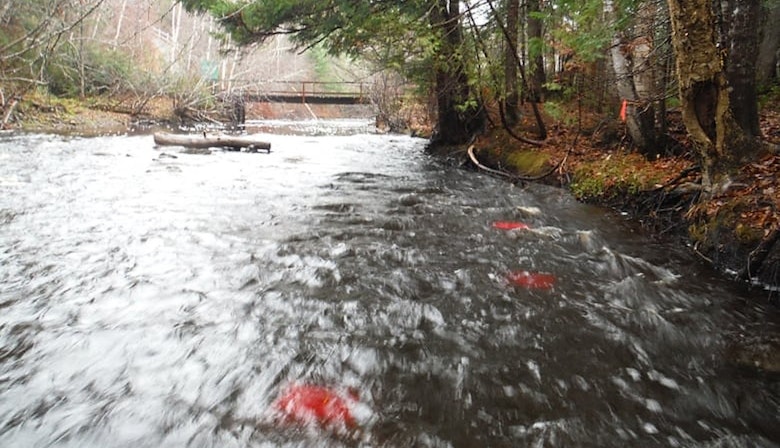 Submerged salmon egg incubation boxes placed below surface in the Ruisseau de Truite, a tributary stream of the Kouchibouguacis River. Photo:Friends of the Kouchibouguacis
The heavy plastic unit is made up of five plates bolted together. Each has 200 tiny holes into which an egg can be placed.

With help from the Miramichi Salmon Association, as well as approval and funding from the Department of Fisheries and Oceans, eggs from wild Kouchibouguacis salmon were extracted and fertilized.

They were then rushed back to the river where volunteers were waiting to place them in the incubation boxes, which were then secured to the stream bottom where they are left through the following winter.

The results were a pleasant surprise: 40 to 50 per cent of the eggs hatched.

And one box, which had detached from the bottom and was found floating freely in the river, had a 97 per cent hatch rate.

That discovery lead to an innovation the following year when the boxes were raised from the bottom to allow water to flow around all sides.The average hatch rate jumped to 80 per cent in those units that weren't scraped away by ice jams or destroyed by other hazards.

Four years later, in 2016, 65 adult salmon turned up in counting traps on their way back from the ocean.

That number has been holding, leading to cautious projections the four-year cycle will result in 100 to 200 fish in 2020.

Genetic testing this year is expected to confirm the increased fish counts are tied to the wild fish from which eggs were extracted.

The population is also being monitored to ensure the tiny foundation group of 12 fish is enough to allow the amount of genetic diversity required to sustain a healthy population.

Doiron said they made sure not to choose just the biggest or fastest fish for breeding pairs.

"We're just giving them a little nudge and we're hoping the population number is not so low that it will cause some genetic issues for the following generations," said Doiron.

In the meantime, he's hoping the younger fish now growing in the river will find what they need to survive the dangerous ocean journey that lies ahead.

"There's a lot of things that we can't control," he said. "We don't know what's going to happen to them out in the sea. So basically what we want to do is we want to give them the best education a salmon can have. That comes from the river, their natural habitat."

ABOUT THE AUTHOR
Connell Smith