A dead river brought back with hard work 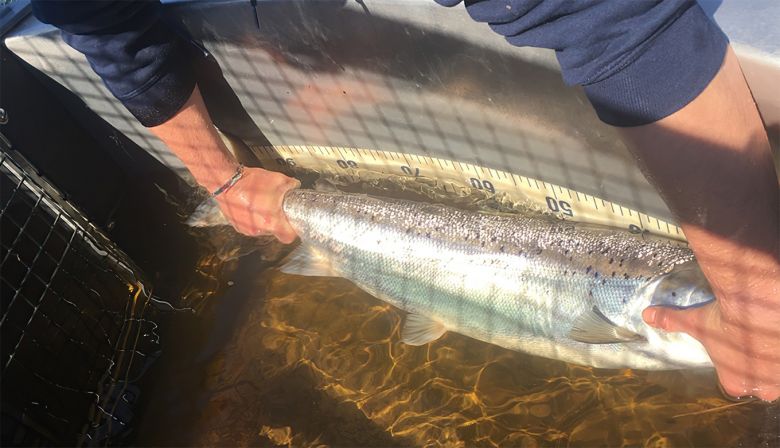 An Atlantic salmon being measured at the Milford Dam fishlift before being released to continue its migration upstream to spawn. Photo Maine DMR
Many people in Maine thought the fish were mostly dead and gone forever.

But diligent efforts to restore the Penobscot River have seen huge numbers of sea-run species return, with smaller, but promising signs that endangered wild Atlantic salmon are also making a comeback.

Conservationists say it poses a lesson for threatened fish in southern New Brunswick, only a short drive away from the Penobscot and its branches, the second largest river system in the state.

"They say, 'Is it worth putting the effort into saving endangered species like that?' They've been rare for so long, people forget about them. The anglers who once went after salmon are no longer fishing. Most of our salmon clubs are gone now. So that's certainly a challenge to convince people a river is worth saving."

More convincing, perhaps, are the results of years of hard work.

Fish counts show that the returns of 11species of sea-run fish are improving.

And the King of Fish is coming back, too, though in more modest numbers. This year, 1,426 large salmon came back to the river from the sea, a far cry from only the 248 that returned to spawn in 2014.

Lamprey, considered an eco-engineer for salmon because they clean and prep spawning and rearing habitat, and short nose sturgeon, an ancient, endangered fish that were once hunted for their eggs to make caviar, have also been spotted in the viewing box at the fish lift station on the Milford Dam.

"Wild Atlantic salmon have been slow to respond, but that's not terribly surprising given the condition of the species," said Tierney, who noted that historically, as many as 100,000 salmon used to return to the Penobscot every year. "The species is so sensitive to marine survival and river threats."

The Penobscot River Restoration Project was first proposed in 1999 and led to five years of negotiations between governments and private interests that wanted to continue to operate hydroelectric dams - the lifeblood of the economy along the waterway.

A trust set up to work on the US$63-million restoration - which included government, tribal partners, conservation groups and businesses - eventually removed two of five dams partially blocking the river: the Great Works Dam in 2012 and the Veazie Dam in 2013, both near its lower end.

The trust also built a stream-like bypass channel around the Howland Dam in 2016.

Tierney said there was still work to do, with hundreds of culverts and other barriers to fish, particularly along nearby streams that are important to species who travel up them.

"When you address the root causes of the problems in these rivers, and barriers to fish passage is among them, it's good for the entire ecosystem," said Neville Crabbe, a spokesman for the Atlantic Salmon Federation in New Brunswick, a group that participated in the restoration.

"From forage fish, such as river herring, right up to your apex predators, like striped bass and Atlantic salmon, it does a world of good."

Crabbe believes a big part of the push to improve salmon habitat on the Penobscot stems from the Endangered Species Act in the U.S., which compels federal and state governments to act to improve habitat once an animal is listed as at risk. This convinced private conservation groups, such as his federation,

to work on securing matching funds.

The law in Canada, he said, doesn't have the same teeth.

His hope is that river restoration efforts will continue in New Brunswick, noting that groups such as the Nashwaak Watershed Association have released a survey of stream crossings that shows 68 per cent of them along the Nashwaak River that drains into the St. John River at Fredericton were impassable to fish.

A similar survey was conducted by the Oromocto River Watershed Association, "and they found hundreds of barriers to fish passage," Crabbe said. "Everything from old dams to hanging culverts to poorly constructed stream crossings '