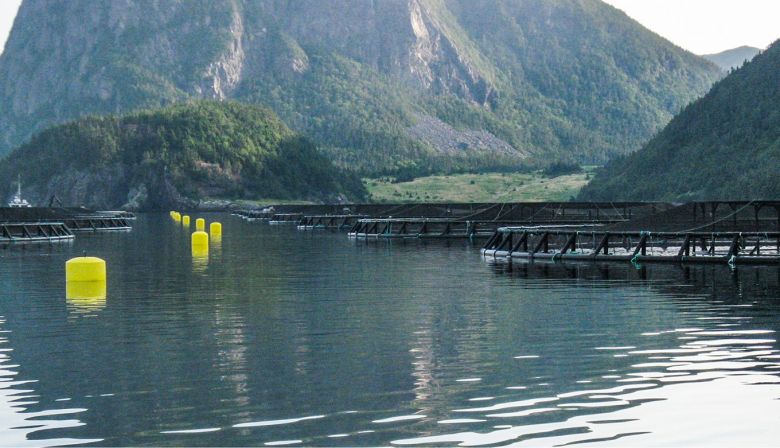 Open net-pen cages in the Harbour Breton area of South Coast Newfoundland.
Foes of open pen fish farms are telling aquaculture companies they should ante up and fund research into whether what they do harms nearby salmon rivers.

Wild salmon is in decline and there are lots of questions about why. On March 19 the Salmonid Association of Eastern Newfoundland (SAEN) wrote to the province’s aquaculture industry association asking their members to fund studies of rivers in Placentia Bay to gauge the impact of salmon aquaculture.

Placentia Bay does not have fish farming right now but Greig NL will be raising salmon in cages in the bay by the end of this year.

In a press release, SAEN executive director Robert Bishop said the group doesn’t have a problem with aquaculture as such, but with the open-net pen systems used by the industry.

In their news release the group cited several studies that indicate net pen salmonid aquaculture does have a negative impact on wild salmon populations.

Bishop said there is “clear evidence that wherever and whenever salmon farms are placed near rivers with wild salmon stocks, those populations do not decline, they disappear. It has happened in Norway, in Scotland, in the Bay of Fundy and has happened in the Conne and Little River’s in Bay d’Espoir.”

Placentia Bay has almost 30 scheduled salmon rivers, most of which, anecdotally at least, are relatively healthy, said SAEN, and there is only one counting fence in the bay, on the Northeast Placentia River.

“Put your money where your mouth is,” Bishop’s group said.

“As an industry body, on your own or in partnership with various levels of government, Memorial University and community groups, commit to funding a long-term study on wild Atlantic Salmon stocks in Placentia Bay.”

The group said the study should include counting fences on rivers near the fish farm, genetic studies to track changes in salmon population, smolt counting and tracking studies and sea lice monitoring.

“If you and your members truly believe that open pen salmonid aquaculture has no negative impacts on wild Atlantic salmon, here’s your chance to prove it,” said Roberts.

Mark Lane, executive director for the Newfoundland and Labrador Aquaculture Industry Association said in an emailed statement to SaltWire that there are many other factors that could affecting salmon numbers.

“We grow salmon for food, alleviating pressures on wild stock, to feed a growing population and appetite for healthy sustainable protein,” he said, adding the aquaculture industry supports salmon enhancement and conservation efforts in Atlantic Canada through work like the Fundy Salmon Recovery project.

Meanwhile, he said, industrialization, habitat loss, commercial salmon fisheries in Greenland and St. Pierre and Miquelon, angling, catch-and-release, poaching, and by-catch in other commercial fisheries, are other pressures on wild salmon.

“Any why aren’t we talking about seals,” Lane added.

Lane also fired a shot back at SAEN, saying if they are concerned about conserving salmon on the rivers, they should acknowledge that angling, catch and release and poaching are also factors.

“The angling community needs to clean up their own back yard,” he said. “They can’t even determine if catch and release is bad for fish.”