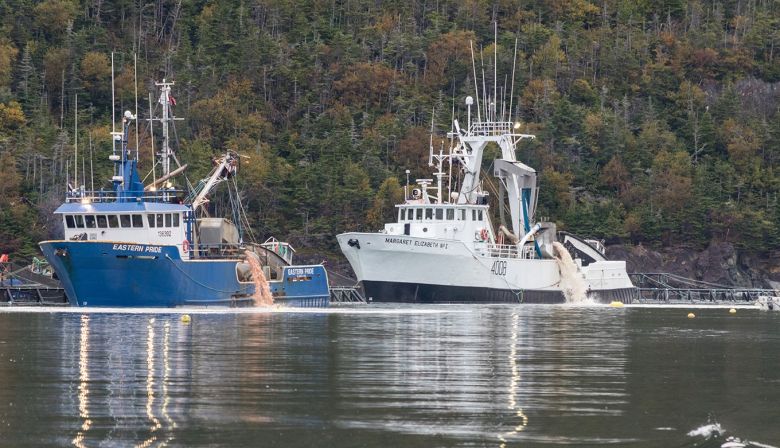 Dead farmed salmon being recovered in Fortune Bay, with a sludge of dead salmon tissue being tossed back into the inshore waters. Atlantic Salmon Federation/Bill Bryden
Wow, what a massive salmon farming disaster just occurred on our province’s south coast.

We still don’t know how many salmon exactly died, but the numbers I think are staggering, millions of pounds maybe. I just watched the CBC evening news coverage of the event and fishing seiners are onsite pumping out the raw stinking mess from the sea cages.

There is salmon fat and body remains everywhere, slicks on the ocean surface, and a slimy covering on local beaches.

I’ve never seen anything like it. It reminds me of how I really don’t like this industry. I try to be objective, and as an angler of wild fish that is difficult, but everywhere I look there is bad news about the business of farming salmon in open ocean cages. And here in Newfoundland we are expanding and open for business.

Everywhere else in the world they are scaling back and moving towards land-based salmon farming. I don’t understand.

Government officials, the aquaculture Industry, and folks with a vested interest, assure local fishers of wild species and the rest of us that there is no need for an environmental alarm. This is all harmless and will wash away with the tide and disperse innocuously into the salty sea.

That’s what they say. But you and I all know that nobody really knows with any certainty what the effects of this disaster might be, either long term or short. Nature is complex and interconnected. It’s not an exact science, if there even is such a thing. And if Northern Harvest’s science is so absolute as to know such future consequences, then I question why this happened in the first place?

Northern Harvest says this massive die-off of fish can be attributed to global warming. I honestly find that a bit of a stretch.

Newfoundland’s chief aquaculture veterinarian says he ruled out any infections cause and attributed the disaster to high water temperatures throughout the entire water column for an extended period beginning in August.


OK, assuming the salmon forensics accurate, it’s still a huge leap to global warming. I think that this is a slick way to deflect blame away from Northern Harvest and the aquaculture business in general. It’s beyond our control, they are saying. That’s what they always say.

The aquaculture industry folks are masters of spin doctoring. Our salmon caught ISA from wild fish. We’ve heard it all before.

Let’s think logically about this. Yes, global warming is very real. The climate of Planet Earth is changing globally, and it’s due in large part to our human industrialization. The preponderance of scientific evidence and opinion points in that direction. That does not mean we will be growing oranges in Newfoundland anytime soon.

Weather and climate are very different. The weather in Newfoundland, a tiny microcosm on the global scale, was not particularly hot this summer. Correct me if I am wrong, please. I think we have had much hotter summers.

Anyway, whatever the reason, it’s another fiasco with this business of salmon farming in open-ocean sea cages.

No matter what they tell us about how strong and escape proof their pens, how sophisticated their technology, how sterile their fish, and they have sea lice under control, we cannot really trust them — they actually do not know what can happen. They apparently did not see this coming. And they weren’t too swift with reporting to the public either.

Again, correct me if I’m wrong, but didn’t we hear about this first from the FFAW? Is that the way it’s supposed to happen? I don’t think so. This industry suffers from a serious lack of environmental oversight and accountability. Would they have ever told us?

I used to follow the Newfoundland Aquaculture Industry Association on Twitter. I made a criticism one morning last winter and swiftly got blocked. That’s why you see all good news and smiling faces on their social media venues. I don’t trust any of the spin we get from these folks on salmon farming and its holistic earthy relationship with our ecosystem. They are now cozying up to green initiatives and claim to have the fast track to feeding the world with a low carbon footprint. There is an ugly environmentally detrimental side to this industry that they dance around with fast talk, loose facts, and often outright nonsense.

You know I am a salmon angler. For that reason alone, I am against this industry. Salmon farming is bad news for wild salmon.

Rivers on the south coast of Newfoundland have all had interbreeding of farmed and wild salmon to some degree. That is long-term impact that is difficult or impossible to undo. If you debate this with the industry, which I have done, they will deflect the issue to hook and release or some such unrelated issue. They have public relations expert smooth talkers that whitewash all they do. It was one of them who blocked me on Twitter.

Remember only cheerleaders and smiling faces allowed to comment.

Hunters, fishers, hikers, kayakers, all of us who love the outdoors, are the true environmentalists. We need to take this salmon farming business very seriously. It is expanding and has the potential to endanger the purity and pristine nature of our coastlines, fish populations, and waters.

The practice of growing salmon in overcrowded open-ocean cages has to stop right here.

We are the industry’s last stronghold and they will not surrender easily. But they will be gone eventually when consumers no longer are willing to buy the product. That is happening now.

Then we will be left with the mess while companies count the money they made while the bonanza lasted.

Paul Smith, a native of Spaniard’s Bay, fishes and wanders the outdoors at every opportunity. He can be contacted at flyfishtherock@hotmail.com or follow him on twitter at @flyfishtherock.