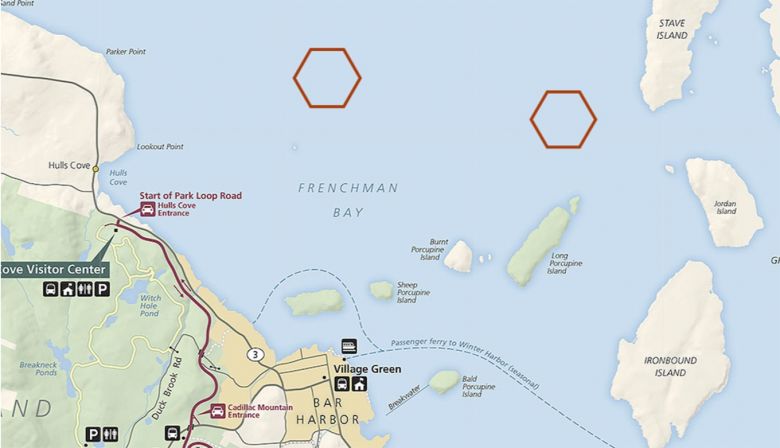 Approximate locations of proposed salmon net-pens
A proposal to raise Atlantic salmon in two 60-acre pens in Frenchman Bay off of Acadia National Park in Maine has drawn concerns from Friends of Acadia, which worries about pollution and navigational and scenic impacts they might create.

"Acadia National Park’s Foundation document lists scenic resources as one of the fundamental resources and values of the park. The proposed salmon farms would be highly visible from vistas along the Paradise Hill sections of the carriage roads and motor-road system, both of which are on the National Register of Historic Places," she added last week. "They will also be visible from the Bluffs area of Route 3, which has been designated as an 'All-American Road,' the highest level of scenic classification in the National Scenic Byways Program. These nationally significant resources deserve careful consideration as the evaluation of American Aquafarms’ proposal proceeds."

A scoping session/informational meeting on the proposal is set for this Wednesday at 4:30 p.m. EST. You can join the program via this link. During the meeting, American Aquafarms will present its draft plans and take questions regarding the propoal. Those draft plans can be viewed on this page.

The deadline for submitting written comments regarding the proposals is 5 p.m. EST on July 7. Comments can be submitted online at this page. After a final plan is presented to the state, additional public sessions will be held.